Pence vs. Harris: Amid lies and side-eyes, a garbage pile of a debate attracts a fly

Less consequential than expected, Harris held her ground, Pence lied and a bug turned out to be the feature 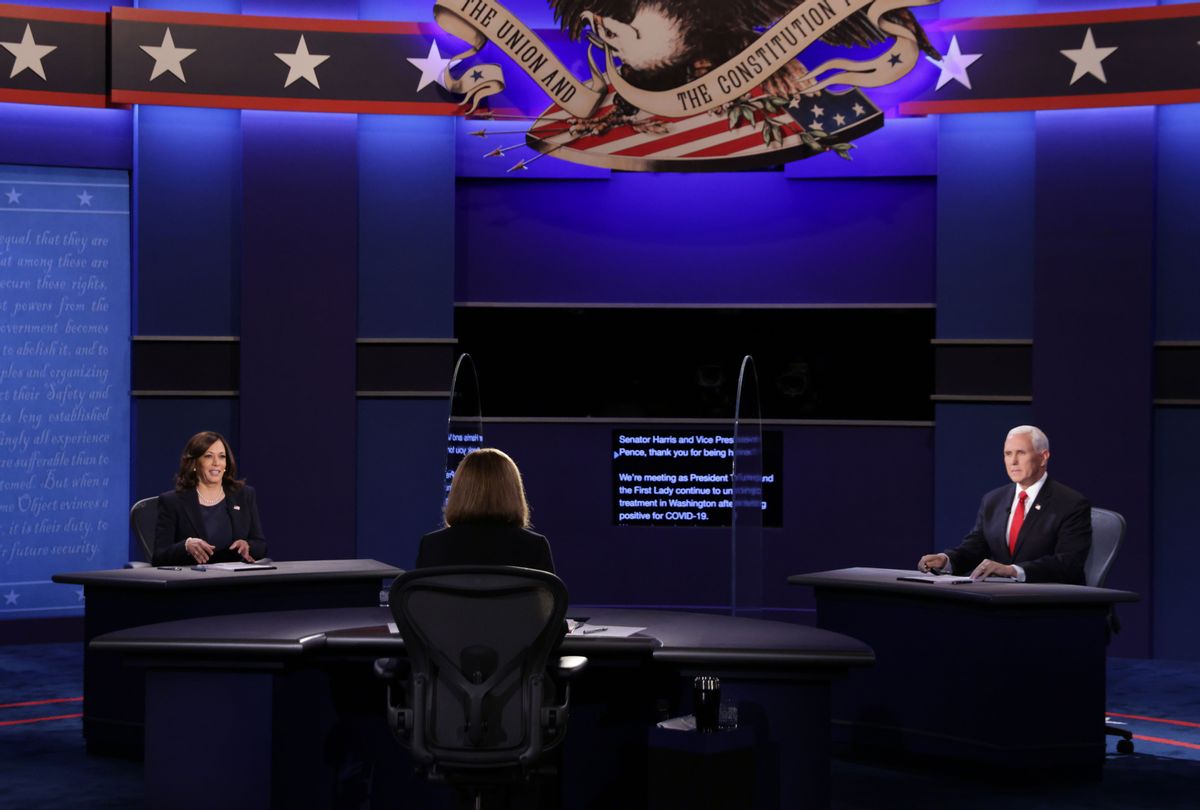 Musca domestica, otherwise known as the common housefly, is known to be a mechanical vector of pathogens. That's a fancy way of saying that the bacteria, viruses, fungi and parasites flies carry can transmit infections to humans, hence our natural aversion to them.

Television series and films employ flies to hint at a character's lifelessness, lack of humanity or dedicated evil. Consider that famous shot of Indiana Jones' adversary René Belloq in 1981's "Raiders of the Lost Ark," condescendingly talking Indy down from a rage with a satin delivery that doesn't break stride even as a fly lands on his lip and appears to crawl into his mouth. Belloq is a disgraced archaeologist who allies himself with the Nazis, the sort of human arachnid one easily envisions consuming human souls. For a man like that inhaling a fly is nothing.

Actor Paul Freeman, who played Belloq, later revealed that he didn't actually eat the insect. The "Raiders" editors removed a frame or two to make it look like he did — a visual trick that happens to underscore his character's rotten nature.

HBO's "Westworld" series premiere opens with a shot of the android host Dolores sitting stock still as a fly crawls across her open eye. She doesn't blink or react in any way and this signals to the viewer that she isn't truly human, merely a facsimile of one.

Furthermore, Dolores allowing the fly to skate across her eyeball indicates that she's programmed to refrain from harming living things. When she mindlessly swats a fly on her neck at the end of that same episode, it's a portent of the terrors in store for humankind. Sure enough, by the second season premiere, Dolores is a killing machine.

During Wednesday night's debate in Salt Lake City, Utah, a fly perched on Vice President Mike Pence's head for more than two minutes, uninterrupted, and the world watched agog. What did that fly want? Why wasn't Pence doing anything about it?

The vice president also appeared to have a rheumy bloodshot eye — not a good look for a man whose boss is recovering from COVID and is believed to be a super-spreader. That injected another layer of dramatic tension into the affair. The Biden/Harris team insisted on plexiglass barriers between the candidates as an infection prevention measure, but the night's unexpected buzzy guest recognizes no such walls or health measures.

For these reasons and the jokes, the fly became a social media star, the evening's debate third contender — and a blessedly silent one at that.

Yet the fly's relaxing break on Pence's snowy dome and the way the world marveled at the fact that it went unmolested for such a lengthy period of time says a lot about what viewers took away from this match-up: not much.

I imagine the audience was relieved to see that Wednesday's debate was an actual debate — what a concept! — although its more important role was to establish the personality contrasts between Pence and his Democratic contender, California Sen. Kamala Harris.

Beyond that, it mainly confirmed that such exercises serve little to no purpose at this point beyond observing traditions that simply don't apply in 2020, especially in the context of an election that is already in progress.

The debate's alleged moderator was USA Today Washington bureau chief Susan Page, who opened the proceedings by reminding Pence and Harris that while Americans want a lively debate, we prefer civility to last week's episode of Joseph Biden versus a rampaging bonobo.

And a debate we got, albeit not exactly lively and utterly uncivil to Page, who was so ineffectual against Pence's flagrant grandstanding that she made the first presidential debate's moderator Chris Wallace look like a prizefighter. She couldn't get Pence to respect the rules, or either candidate to actually answer the questions she asked. One of Pence's allotted 15-second rebuttals ran 38 seconds after Page tired of saying "thank you, Mr. Vice President" to a man who wouldn't stop droning over her.  Midway through the "Veep" debate I wondered why Page was even bothering to stay in the room. I mean, wasn't she worried about the fly?

Welcome to this year's presidential election debates. In keeping with 2020's wild style, they're all pointless garbage piles; no one can be surprised that this one attracted a flying invader.

Thanks to the first presidential circus sideshow, the substance of the moderator's questions never mattered. Instead this veepstakes was entirely about reading how each candidate operates under pressure. The candidates delivered the answers we'd expect in every case, and that meant no memorable haymakers landed or were even swung. They could say whatever they liked, and Pence took that as license to lie constantly to support Trump's terrible record since he knows his base is already locked in.

Granted, each side could have been sharper. Nominally Pence is the head of the Trump Administration's Coronavirus Task Force, which Harris referenced by repeating the administration's failure to prevent 210,000 Americans from dying in a pandemic that's also infected more than 7 million.

In response, Pence attempted to corner her into giving an answer about packing the Supreme Court and brayed victoriously when she refused to answer. That rang hollow given his rebuttal to that grim pandemic statistic, however, in which he insisted that Trump put the health of Americans first from the start of this mess. Bob Woodward's book and released recordings of his conversations with Trump, not to mention our own upended lives in quarantine, tell a different story.

Given the chance to weigh in on whether justice was served in the case of Breonna Taylor's killing by police officers, Pence pivoted to voice his support for law enforcement and attempted to attack Harris' tenure as California's attorney general, which didn't stick.

Pence waxed sanctimonious over Page and sometimes over Harris with little stopping him beyond his opponent's will. And that stacked the deck against Harris in ways she struggled to overcome at times in the first half, walking the line between respecting the moderator and mostly remaining within her time limit, while also answering succinctly.

When it became obvious that she had to seize time for herself since Page would not stand in the way of Pence, she did. Unclear in the debate's immediate wake was whether that restraint worked in her favor until we remember, oh yeah — none of this matters.

America already has a solid profile of Pence to draw upon; the religious right loves him and everyone else either sees him as white noise made flesh or the ghost ready to march us into Gilead.

Harris had a trickier path to navigate. In the way of all women who rise to the highest rungs of the power ladder (see: debate analysis surrounding Hillary Clinton) she had to appear fierce, but not too fierce; tough, but not too tough; and suppress any version of a completely justifiable "ooh, this mendacious bitch" face whenever Pence calmly and brazenly prevaricated. Hence the Daenerys Targaryen-style power smizing, the raised eyebrows and accentuated, "are you kidding me?" side-eye each time Pence misrepresented her record or the Biden/Harris platform.

Harris wielded her affability and her polite but firm refusal to be condescended to by Pence, a man whose debating strength has always been to spew lies and accusations in a warm mild voice wrapped around a "gosh and gee willikers" delivery.

To that end, Pence's chief accomplishment on Wednesday was to steamroll Page into a thin layer of paste by blowing past the time limits both parties agreed upon over and over again, disregarding her weak flailing to keep him in check.

Where to begin on the variety of messages Pence's aggression and Page's ineffectuality sent to everyone witnessing the debate? If you're a woman in the workforce, Pence is that male coworker or boss who drives you insane and makes your life hell.  Women of color surely recognized Harris' practiced smile and her constant insistence that Pence not talk over her as evidence of the manure they're obligated to contend with diplomatically if they want to get anywhere in their educational aspirations, careers or lives.

This made the fly an indicator in a debate with no real-time fact-checking. The face-off between Harris and Pence lasted a scant 93 minutes, but for the two minutes that the fly took over the frame it told another version of the story.

Let's refrain from any base jests referring to the substances to which flies are attracted and simply observe the physical implications of the insect's comfortable two-minute rodeo ride in Pence's hair. The fact that it stayed put for so long made Pence look focused and resolute at best and at worst lifeless and — yes, Dolores — inhuman.

If a winged critter relaxes on your skull for a full 123 seconds — enough time really stretch out those segmented legs and get comfortable — that speaks of a soporific lack of animation that does not come across well on television. And if the point of this debate is to reassure viewers that they're up to the task of serving as seconds-in-command to men who will be the oldest to ever hold office, including one current recovering from COVID, you probably don't want to be the guy upon whom an insect featured frequently in memento mori artwork decides to spend an extended amount of time.

Does that mean Pence lost? Who can even say in an era where such determinations hold no actual value. The CNN instant poll assigned Harris the win, but Fox News viewers predisposed to dislike Harris probably viewed her smiles and SMDH expressiveness negatively. Fox commentator Karl Rove opined that Pence looked strong while Harris stumbled.

MSNBC contributor and former Missouri Senator Claire McCaskill said Harris showed off a "joyfulness in her spirit" alongside evidence of her being strong and in command.

"What she needed was for the United States of America to be comfortable with Kamala Harris," McCaskill remarked, "and I think she accomplished that tonight."

Also, and this is important, she made it through the debate without being saddled by a housefly.

It's the little winged things that make all the difference.