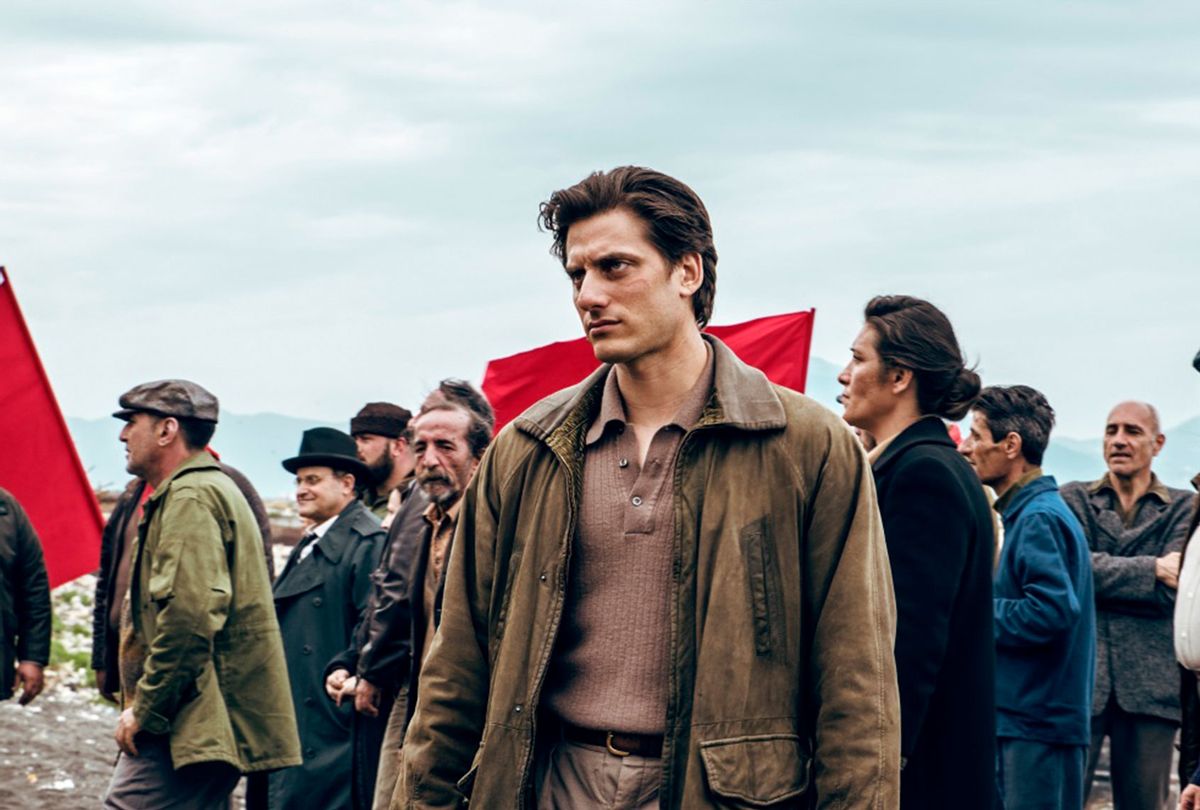 Luca Marinelli, best known to American audiences for his role as a warrior in "The Old Guard," gives a soulful performance as the title character in "Martin Eden," director Pietro Marcello's vigorous adaptation of the Jack London novel. Martin is a poor young sailor who lives with his sister Giulia (Autilia Ranieri) and her disdainful husband, Bernardo (Marco Leonardi). When he rescues Arturo (Giustiniano Alpi) from some trouble one afternoon, he meets the wealthy Orsini family and falls for Elena (Jessica Cressy) — much to her parents' chagrin.

Elena inspires Martin to become a writer and he educates himself to achieve this goal. But Martin writes "sad things" and struggles to publish.

"Martin Eden" shows how the kindness of Maria (Carmen Pommella) a widow, and his friendship with Russ Brissenden (Carlo Cecchi), an intellectual, helps Martin realize his dreams to be a writer. As he pursues success, however, his relationship with Elena changes. Moreover, he is branded as a Socialist, which makes him both uneasy and famous.

Marinelli, who is in every scene of the film, is extraordinary as Martin. An early scene has him staring curiously at a painting of a ship, observing how it appears differently from a distance and up-close. Marinelli is often filmed in close-up throughout "Martin Eden" and his eyes and expressions show how he grows and changes from a young, hopeful young man full of desire and wonder —  one who maintains his virtue and pride as he becomes educated (reading Herbert Spencer) — only to become a cynical, contemptuous writer frustrated by the world that that celebrates him.

It's a shrewd performance, and Marinelli exudes charm and sex appeal as young, humble Martin. But he becomes unlikable once Martin can afford all the things he longed for, (his hair and teeth change, symbolizing his decadence and decay). He also doubles down on his ideas about individualism and class that inspire his passions like love once did.
Marinelli spoke to Salon via Zoom (and with the assistance of a translator) about the character of, and themes in, "Martin Eden."

Martin needs to write to express himself. You act to express yourself. Why did you choose to become an actor, and how does your work, in films such as "Martin Eden," create meaning for you?

This is the question! [Laughs] I really like acting; it was a magnet for me. If I can do this for the rest of my life, I will be very happy. But I don't know why it's so fascinating for me. Maybe because I can express myself through it, and maybe because it's a job you have to collaborate with other people's thoughts and ideas. It's a way to continue to play. They always told me in the academy, you have play seriously, as kids do.

Martin has a hunger to read and chooses Herbert Spencer. I'm curious what books or writers have influenced you? And did you read the Jack London novel to prepare for this role?

I didn't know the book, but I knew Jack London and "Call of the Wild." I knew he wrote "Martin Eden" on a boat during a trip. I immediately fell in love with the story and had a connection with the character. I read a lot of what Jack wrote. What I love to read is the Beat Generation. Charles Bukowski. I discovered "Pulp," which was last novel Bukowski wrote, but it was the first book of his I read. I like Italo Calvino's "Cosmicomics." It's very funny. Now I'm very into graphic novels, but also theater — Shakespeare, Pinter.

Martin is seen working jobs — on ships, in a foundry, on a farm. He wants to write but insists he can't do office work. I'm curious about the physical and emotional strain of the role getting into Martin's body and mindset?

We started in a very technical way. I read the book, and I read he's very strong and has a lot of energy. I started with the body and [became] stronger than I am normally. It was really useful for the character. Then we added all the language Martin used. We were focused on the dialect of Napoli that is peculiar and precise. I had a dialect coach, which helped me find this character. Then I tried to learn what he was reading, Herbert Spencer and all the political philosophy. I tried to understand his feelings and emotions; he approaches things with head and heart. What feelings were behind his every choice? And how did he act with body and dialect?

Martin is virtuous and proud; he refuses to accept help from others. What observations do you have about Martin's character, who is stubbornly determined to succeed on his own merits?

I think he is a curious guy, and very courageous; he lives his life like an adventure. He's very determined and stubborn. I fell in love with his character and his sensibility and with his way of approaching life and people. His struggles to make his own views about politics, love, and society. I love how adventurous he was.

I was charmed by Martin's friendship with Russ Brissenden, his mentor. Have you ever had that kind of support in your career — a teacher or colleague, someone who influenced you and helped you become who you are?

That's a crazy aspect of this movie. Russ is the mentor of Martin Eden, and the actor Carlo Cecchi was and is my mentor when I started acting. My first professional experiences in the theater were with Carlo. That was very powerful. When I was preparing, and talking about the character, Pietro [Marcello, the director] suggested Carlo because he knew Carlo was my mentor. It was a wonderful and moving experience because we had intense scenes together.

Martin's love for Elena forms the backbone of the film; he feels he "owes it to her" to be successful because she inspired him. What does love mean to Martin?

Maybe I'm too romantic to answer this question, but love is everything for Martin. He loves everything and that was my approach — to have passion for everything. He is full of passion sailing on a boat, working in a factory, talking with a friend, falling in love with a woman, making love.

What do you think of how the class struggle is depicted in the film?

Martin's politics are interesting as well. He gets swept up in socialism, but champions individualism. How do you rationalize his success at the expense of his ideals?

I read political philosophy and wanted to find balance in what he is saying and his thoughts behind what he was saying. It was important to understand why he was doing what he did. Sometimes he was provoking, sometimes he believed what he was saying. In every public speaking event or interaction he has there was a feeling — and that's what interested me more than his political views. Why in this moment is Martin thinking this? In life, one day we believe something and then a year passes, and you think something else.

Martin makes a powerful transformation. Do you think fame could change you? "Martin Eden" certainly proves your magnetism as a leading man, but your participation in "The Old Guard" exposed you to American/global audiences on a larger scale. Are you looking to have a more commercial career? Will there be an "Old Guard 2"?

Fame can change you, and it's important to have a lot of balance in your life because [acting] is a job that can put you out of balance. It's very important to stay grounded. This is my way to be healthy in this industry. I want to make "Martin Eden" 2 and 3, and "Old Guard" 2, 3, and 4. Work is important, but to have a private life is important too. To give the industry its due but keep one foot in it and one foot out.

"Martin Eden" is available in select theaters and virtual cinemas on Friday, Oct. 16.