Things fall apart. The U.S.S. Discovery's new adventures may offer a vision of how we go on nevertheless 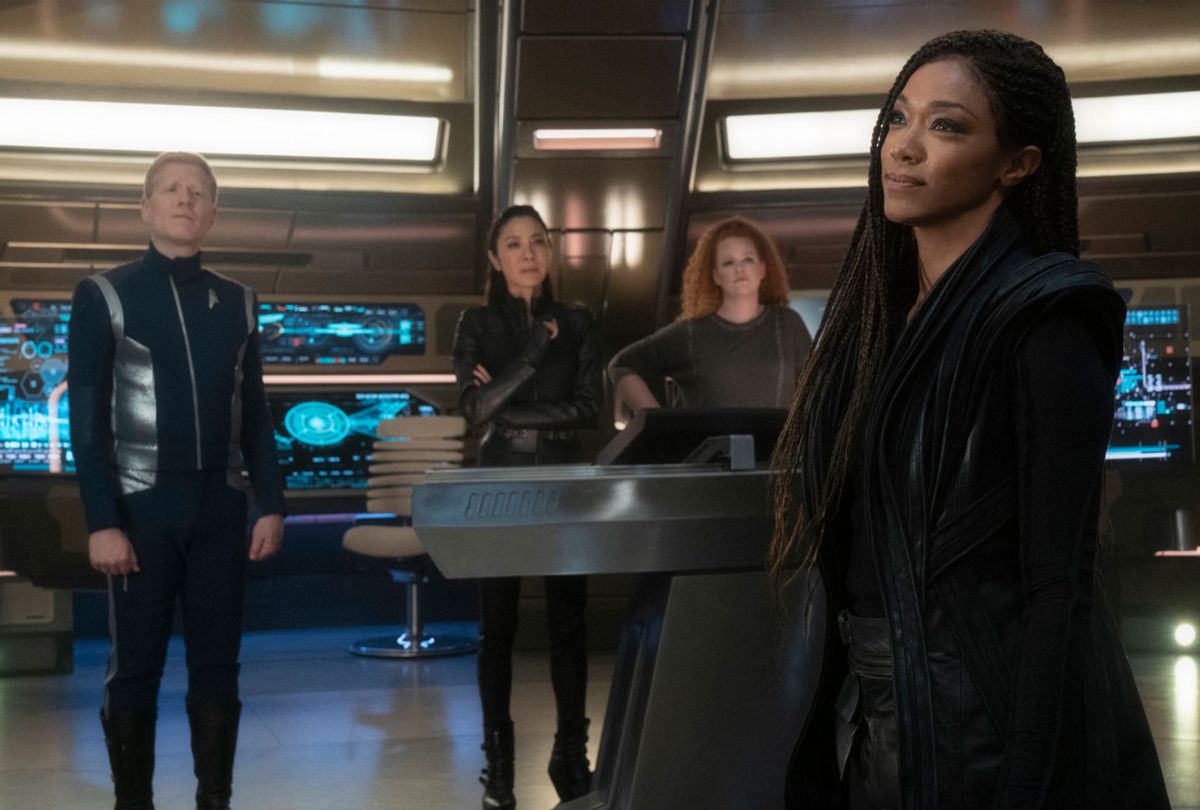 Everything falls apart eventually – our bodies, our countries, governments and the systems we create, also empires, vessels, land masses. This is a fascinating concept to witness from the perspectives of history and distance. Living through such transitions, however, can be terrifying.

The third season of "Star Trek: Discovery" gives specialist Michael Burham (Sonequa Martin-Green) a bit of both. In leaping her and the rest of the USS Discovery crew more than 900 years into the future to the 32nd century, she represents history to everyone she encounters.

What's also waiting there is a version of a universe beyond their imagining: one in which Starfleet and the entire United Federation of Planets has ceased to exist. Starfleet was all but wiped out in a flash, gone in a catastrophic event known as The Burn that occurred a little over a century prior to Burnham's crash landing on an unfamiliar planet.

As a new ally named Book (David Ajala) explains, this is name given to the moment that all dilithium in the galaxy suddenly exploded for unknown reason. Dilithium being the main power source of every warp-capable ship's core, that meant the simultaneous destruction of thousands of starships and the loss of potentially millions of lives not only in the Federation but any civilization dependent on it.

All Federation protection for the planets in the Alpha Quadrant has presumably disappeared, along with its insistence that civilizations respect one another or, barring that, learn to live without conflict. It's a lawless, Darwinian free-for-all, more or less – and Burnham and all of her previously state-of-the-art technology are viewed as obsolete.

Every iteration of "Star Trek" is a reflection of the era in which it is telecast, with elements of its storytelling updated to suit the era-specific sensibilities of its audience. Specific rules and principles carry over from series to series and generation to generation to maintain some standard framework around which fans can engage with what they love about the franchise and what it stands for.

This makes the new season's departure from everything fans take for granted about "Star Trek" a refreshing challenge and one that has the potential to change how we view the Trek universe in general. Fans can argue and gripe over the merits and legitimacy of events in the Prime and Kelvin universes, but by removing the Federation from the equation entirely from a future more distant than the show has boldly gone before is inspired.

People imagine our future is based on everything we know in the present, and that includes the assumption that the rules holding together the fabric of our existence may be tested but will usually hold or can be repaired in the event of their breakage.

But if everything we take to be true disappears overnight, this throws the course of our existence into question. In a real sense the world experienced this in 2016 when America elected a despot, and a vast portion of the public soothed itself by reminding their freaked out friends that the Constitution's system of checks and balances would assure he wouldn't do too much damage to the nation and the world.

Little wonder, then, that this new season flips over the table on our assumption that Gene Roddenberry's bright, powerful and fair Federation would survive and flourish beyond a thousand years, a similar assumption to one we're guessing that a devoted citizen of the Roman Empire might have held.

Book characterizes The Burn as the event that irreparably altered galaxy's course, "the day the galaxy took a hard left," he said. In the season premiere, "That Hope Is You, Part 1," we see the immediate effects of that course shift. Book is essentially an outlaw, surviving as best he can and seeking what remaining dilithium he can get to power his equipment, as is everyone else in the universe.

Starfleet's presence is nonexistent, and Book advises Burnham to hide any identifying items for her own safety. However, before we see where Burnham lands, we see a man whose only job appears to be waking up and scanning a digital view of the galaxy for any signs of the Federation's return.

Which is to say, hope remains . . . only now it is in form of pure aspiration, befitting of a group of travelers accustomed to being acknowledged as agents of authority entering a frontier where they are the curiosity and the strangers.

The cinematic modernity of "Star Trek: Discovery" has earned criticism from purists who miss the more cerebral focus of previous series and decry its emphasis on action, explosions and grim themes. This interpretation isn't entirely out of bounds; "Discovery" is part of a franchise that debuted in an era of franchise-dominated blockbuster entertainment.

Importantly it is also a "Trek" chapter that premiered in an era of hopelessness. The first two seasons feel like a reaction to that more than a response, with storylines designed to earn its place in the "Star Trek" universe as opposed to expressly forging its own path.

Granted, Season 1 does some of that, primarily by introducing a technological innovation in the form of the Discovery's "spore drive," an organic-based system that enables the ship to leap great distances through space almost instantaneously. But it was mainly given to us as a character-driven work about action and reaction, testing what an explorer's role should be in a time of conflict. Season 2 left some of that behind and felt lighter for it while still operating like a franchise film.

And I can't say that the third season diverges from that approach. If anything, the series settles into the chaos of the 32nd century after the second episode, when we see what happened to Discovery and its crew and witness Burnham adapt to the survivalist spirit of this new age. (The ship followed Burnham through a wormhole that propelled them forward in time but didn't land in precisely the same place as she does, physically or chronologically.)

Once everyone is up to speed in terms of The Burn and the disappearance of Starfleet, the season hints at the familiar direction of finding out not only what caused this history-altering disaster but whether and if they can return to their own time.

This development also transforms "Discovery" into something of an environmentalist tale. Never mind the fact that the ship discovers a method of travel that essentially runs on fungi; the dilithium crisis might as well be a parable for how much instability we're experiencing by gobbling up resources and taxing the planet's natural systems into obsolescence.

But while the Discovery crew moves down their uncertain path, the spiritual refrain of the season reminds Burnham, the crew and the viewer what the AWOL organization they represent stands for, and asks whether the dissolution of a body is enough of a reason to abandon its ideals.

The late Gene Roddenberry constructed "Star Trek" around an ideal of unity, curiosity and adventure, with the notion that humanity and its allies could bring a message of hope and understating to hostile places even as it specifically sought to refrain from interfering (while, in truth, frequently doing exactly that). The new "Trek" series – "Discovery" and "Star Trek: Picard" use their storylines to speak to a world caught up in nationalism, exclusion, xenophobia and division.

"Picard," which is set long after the events of "Star Trek" and James T. Kirk's adventures on the Enterprise, introduces a Federation that has been corrupted by politics and lost its way. "Discovery" pre-dates the original "Star Trek" in the franchise timeline, meaning its mistakes and lessons inform Kirk's knowledge of history. These captains and crews have a map, in other words.

The 32nd century takes us beyond those old edges – past official channels of diplomacy and agreed-upon rules of governance into a future that is very much imperfect. But it does so with the awareness that despite knowing, as Burnham says, that "our numbers are few, our spirit is undiminished." Following the dissolution of a system or an organization, the higher ideals that forged them can remain.

Yet to be seen is whether these new "Discovery" episodes will show viewers a way to evolve towards them.