In an Amy Coney Barrett reality, "What the Constitution Means to Me" is even more gutting

As a teen Constitutional debater Heidi Schreck found the Constitution "magical." Then she became a woman in America 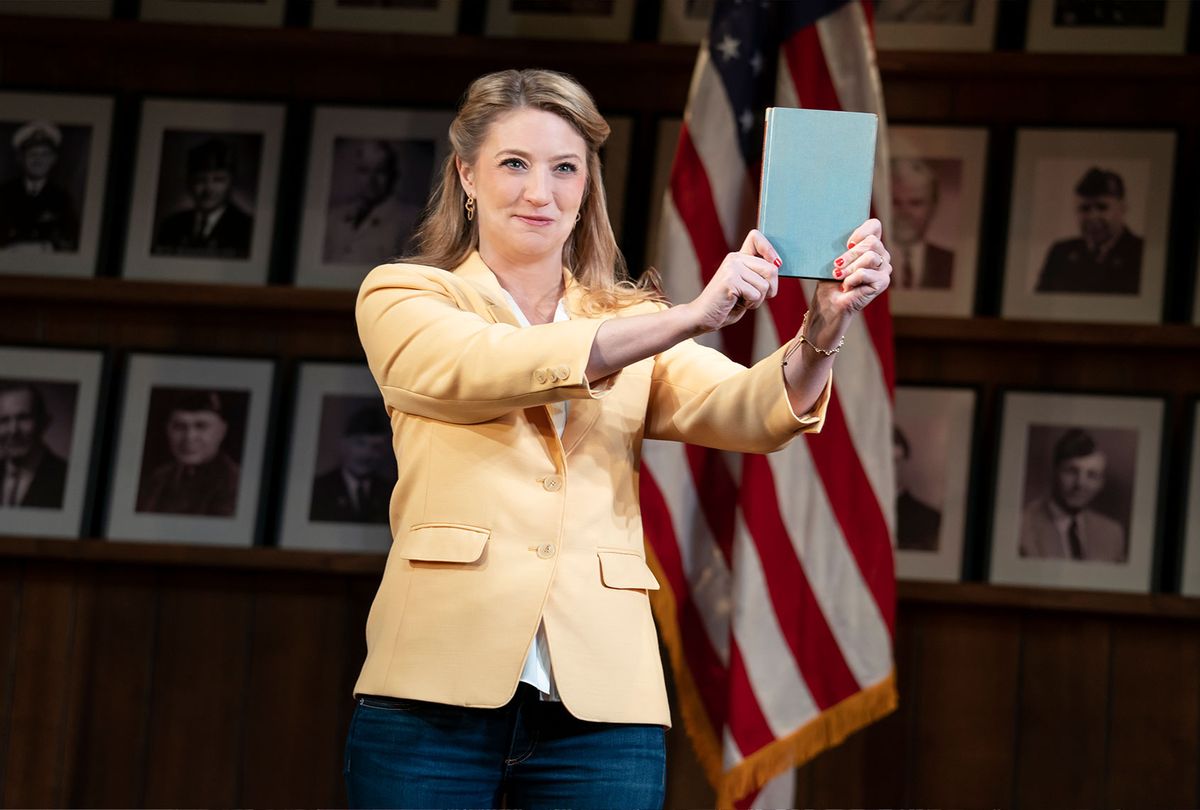 Heidi Schreck in a scene from “What the Constitution Means to Me.” (Joan Marcus/Amazon Studios)
--

Heidi Schreck describes her teenage self, the one who earned her college tuition by dominating Constitutional debate competitions hosted in American Legion halls around the country, as "psychotically polite." She plays 15-year-old Heidi this way and with tremendous comedic verve for about the first 37 minutes of "What the Constitution Means to Me," Marielle Heller's filmed production of Schreck's Tony Award-nominated Broadway show currently streaming on Amazon.

You only need to bask in Schreck's forced gentility to understand why she was champion at Constitutional debate. The type of youthful zest coached into Schreck by her mother is one that countless girls and women have been taught to internalize and to shine as a survival mechanism, and it bursts forth from her muscular smile like a sunbeam in some scenes and piercing laser in others.

That smile retreats when Schreck relaxes into her true self, "an adult woman in my very late 40s" who starts talking about the Equal Protection Clause taken from the text of the 14th Amendment – something she admits is increasingly difficult for her to discuss as time goes on.

This is the point in Schreck's one-woman show where the playwright takes off her schoolgirl version's yellow blazer, shedding the innocent light and excitement that charmed so many American Legionnaires and parents all those decades ago. Until Schreck announces that she's being "herself all the time now" she introduces each clause as magical! And miraculous! In their purest ideal forms, they are.

However – and here is the reason Schreck sheds her cloak of innocence – the statistics she cites to back up her argument that the United States is one of the most dangerous places in the world for women, thereby proving this clause has yet to be enforced in a way that lives up to its dual promise of equality and protection.

Amazon publicized the premiere date of "What the Constitution Means to Me" on Sept. 17, one day before Supreme Court Justice Ruth Bader Ginsburg died in Washington, D.C. Ginsburg saw the play in the summer of 2019, causing quite a stir with her appearance; a showstopper near its ending is a snippet of audio featuring Ginsburg answering the question of when there will be enough women on the Supreme Court with, "when there are nine."

The hour or so prior to this is a physicalized wrestling display between Schreck concurring with and dissenting from the  opinion of the Constitution her younger self once held. Throughout the production she demonstrates her profound admiration for what the Constitution symbolizes while tearing into its flaws with frustration and disappointment. Obviously the fact that this document provided opportunities for her and other women of her generation is close to her heart, but like so many aspects about American life and history, to love it enough to comprehend its intent is to enter a shadowy place of compromise.

Schreck filters her viewpoint of the Constitution through her own family's history, spelling out how four generations of women in her family survived misogyny, abuse and deprivation, aspects of violence for which its articles and amendments contain little to no remedy thanks to generations of Supreme Courts dominated by men. She doesn't reserve her aggravation only for herself and the women of her family but all of those shortchanged by its promise, including Native Americans, Black men and women, immigrants and members of LGBTQIA+ communities.

Notably in this age of thematic circumstance as art reflecting life as it moves and erupts, filmmaker Marielle Heller's 103-minute production also happens to debut at the end of a week of Senate Judiciary Committee hearings for Amy Coney Barrett, Donald Trump's nominee to replace Ginsburg on the Supreme Court.

Schreck's play doesn't directly speak to the infuriating misogyny surrounding Barrett's rushed confirmation – its production was finished quite some time ago – but it offers a preview of the struggles awaiting liberals by citing a consequential decision written by Barrett's mentor, Justice Antonin Scalia, that's been called "the death of the 14th Amendment for women."

The performer's impassioned explanation of the case and the decision's grim consequence becomes all the graver when absorbed in concert with Heller's choice of framing. Schreck's set at the Helen Hayes Theater mimics the wood paneling of a veteran post's interior whose walls are lined with sober old photos of men in dress uniform, staring out at her.

In these gutting moments, as her adult self candidly shares the aching stories the bright naïf she used to be never could, the director slams between tight frames of Schreck's stricken face and wider shots that set her against these glowering faces, as if to evoke the appearance of her being under siege by some patriarchal ghost army. (Before writing off the production as somehow anti-male, though, consider that Schreck's only company onstage aside from these photos is the kindly faced Mike Iveson, her stand-in for all the Legionnaires who moderated those long-ago competitions and her vision of positive male energy.)

Schreck's show bobs and weaves between play acting and confessional in a way that invites the audience to ride the highs and lows of her discoveries about her family history and that of our country's justice system, and experience the lights of faith and dim devastation her emotional journey yields. Curious as I am to hear what Barrett and other declared originalists would make of this production, I'd be vastly more interested to see what her four daughters might take away from it.

The joy of "What the Constitution Means to Me" is the liveliness of Schreck's connection to a document that partisans love to invoke without actually reading. Not only does Schreck genuinely seek to understand the spirit of the Constitution, she believes in its possibilities despite its many imperfections . . . because the problem isn't necessarily the document itself.

Directly in the wake of this sobering observation, transitioning into that RBG quote, Schreck restarts the motor by bringing on the next generation of debaters, represented by high schooler Rosdely Ciprian in one version of the production's end and recent high school graduate Thursday Williams in the other – two young Black women, one a child of Dominican parents.

Their role is to be her opposition in a rousing debate over the question of whether the Constitution should be kept, or abolished and rewritten to be truly egalitarian. I'll leave it up to viewers to decide which is the more persuasive of the two and only say that the winner is determined by each audience . . . and a number of them voted to abolish.

I don't believe this speaks ill of the Constitution itself as certainly as it indicates the passion and thoughtfulness with which the next generation hints at approaching the battle to continue amending this imperfect framework and working toward that more perfect union. Between Schreck, Ciprian, and Williams "What the Constitution Means to Me" becomes a hopeful vision and reminder that the Constitution a living document, but one that needs to be brought alive constantly by successive generations.

"What the Constitution Means to Me" is currently streaming on Amazon.