Fauci “absolutely not” surprised Trump got COVID: He “equates wearing a mask with weakness”

"Sure enough," the White House Supreme Court announcement "turned out to be a superspreader event," Fauci says 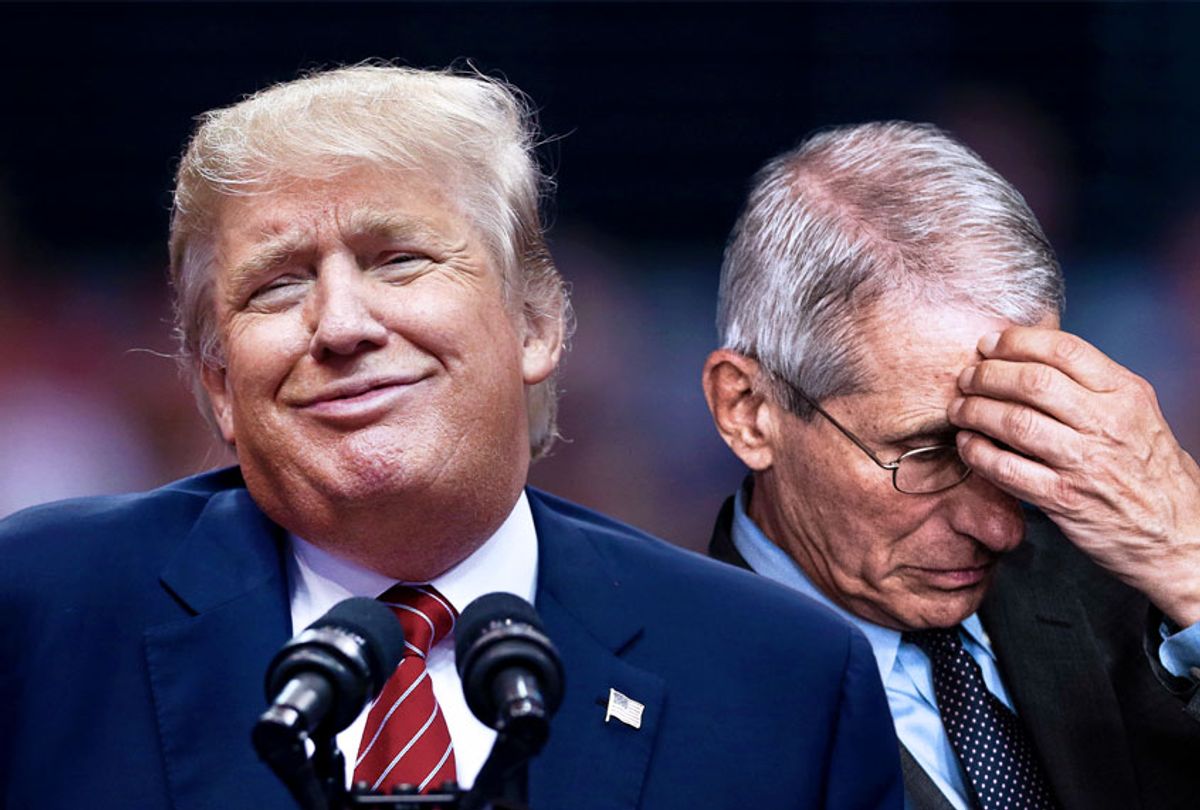 Dr. Anthony Fauci said in an interview on Sunday that he was "absolutely not" surprised that President Donald Trump tested positive for the coronavirus after holding a "superspreader event" at the White House.

Fauci, the longtime director of the National Institute of Allergy and Infectious Diseases, pushed back on the administration's coronavirus spin in an interview with "60 Minutes." He told CBS News medical correspondent Dr. Jon LaPook that he was "absolutely not" surprised that Trump tested positive after Supreme Court nominee Amy Coney Barrett's announcement last month in the Rose Garden, which also featured indoor festivities.

"I was worried that he was going to get sick when I saw him in a completely precarious situation of crowded, no separation between people, and almost nobody wearing a mask," Fauci said. "When I saw that on TV, I said, 'Oh my goodness. Nothing good can come outta that, that's gotta be a problem.' And then sure enough, it turned out to be a superspreader event."

"You know, he sometimes equates wearing a mask with weakness," Fauci said, suggesting the president was trying to make a " statement of strength, like, we're strong, we don't need a mask, that kind of thing."

"Do you have a feeling that there is sometimes an all-out war against science?" LaPook asked.

"Oh yeah. I mean, particularly over the last few years. There's an anti-authority feeling in the world," Fauci replied. "And science has an air of authority to it. So people who want to push back on authority tend to, as a sidebar, push back on science."

Fauci now has to be accompanied by federal agents on his routine walks after receiving threats against him and his family.

"That's sad. The very fact that a public health message to save lives triggers such venom and animosity to me that it results in real and credible threats to my life and my safety," he said. "But it bothers me less than the hassling of my wife and my children."

Fauci also said he was "really ticked off" when the Trump campaign used his comments out of context in an advertisement.

"I do not and nor will I ever, publicly endorse any political candidate," he said. "And here I am, they're sticking me right in the middle of a campaign ad. Which I thought was outrageous."

But even as the campaign uses him to score political points, the White House has blocked many of his media appearances.

"Has the White House been controlling when you can speak with the media?" LaPook asked.

"You know, I think you'd have to be honest and say yes," Fauci said. "I certainly have not been allowed to go on many, many, many shows that have asked for me."

Fauci added that that White House restrictions on his media appearances haven't been "consistent."

While Fauci was highly visible at the White House coronavirus task force briefings early in the pandemic, the administration has shrunk both his role and that of the task force. Fauci said last week that the task force meetings have been reduced from every day to just one day a week even as the US continues to see increases in new cases.

Instead, Trump has been more interested in discrediting the scientific consensus around masks and social distancing. He recently added controversial Dr. Scott Atlas, a neuroradiologist with no background in infectious diseases who has pushed a deadly and "unethical" herd immunity strategy, to the task force.

Fauci told CNN last month that Atlas often says things that are "out of context or actually incorrect" and was an "outlier" among the infectious disease experts on the panel.

Atlas posted a Twitter thread misrepresenting the science around masks over the weekend, writing, "Masks work? NO."

Twitter removed the tweet. A spokesperson for the social network said that the tweet violated its policy on content that "could lead to harm," and "statements or assertions that have been confirmed to be false or misleading by subject-matter experts, such as public health authorities."