As the long-running show comes to an end, its allure across the partisan and cultural divide holds despite our rift 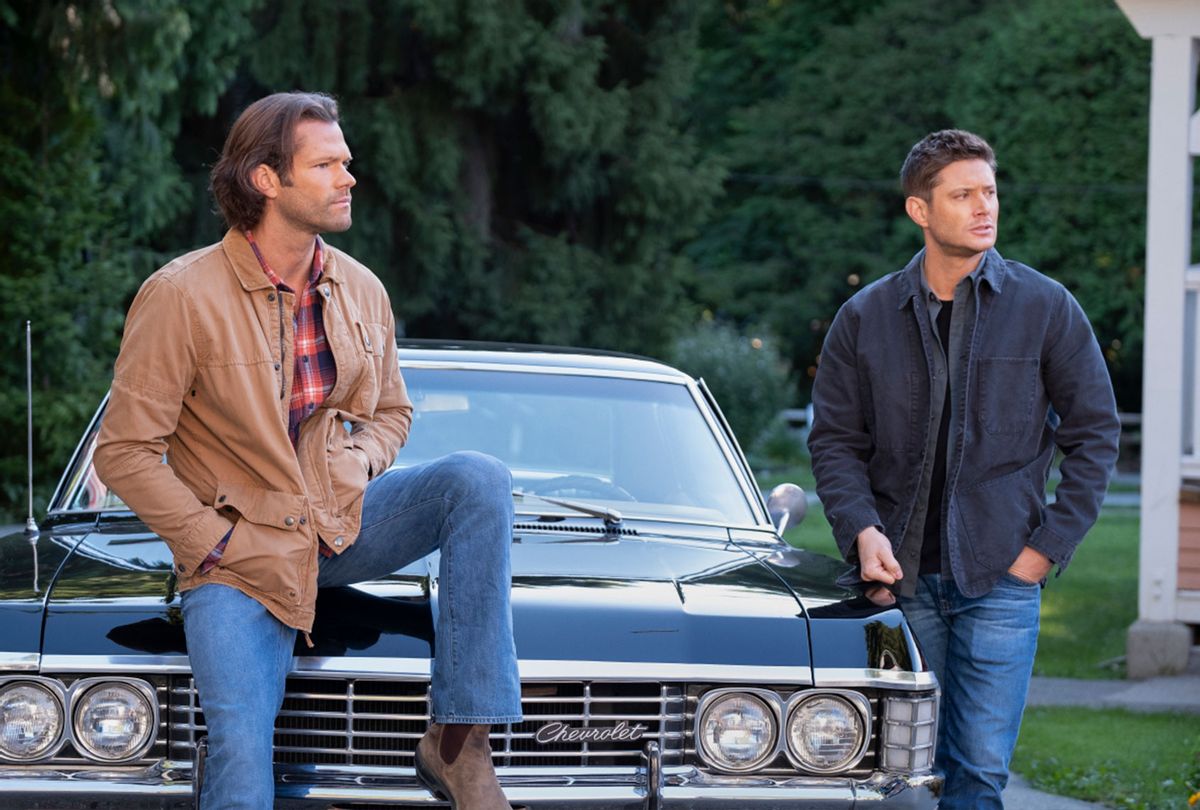 In the beginning there was The WB, and there was UPN, and for five seasons at the former there was the pop culture phenomenon known as "Buffy the Vampire Slayer." That seminal series leapt over to UPN where it would conclude its run in 2003.

Two seasons after "Buffy" left the air, "Supernatural" emerged on The WB, and became one of the few shows to cross over to The CW once The WB and UPN merged. The show's road officially ends there on Thursday night, bringing a close to a story that has run for 15 years.

Even so, "Supernatural" has earned far less cultural cred over the years despite the fact that the show has lasted twice as long as "Buffy." Longevity does not guarantee cultural impact or appreciation, of course. Let's also acknowledge that that "Buffy" is personally beloved by a number of critics and scholars working today because it was a vanguard of television's golden age, and it dared to sculpt a goofy cult film adaptation into seven seasons' worth of grand and emotionally complex serialized stories on a pair of small, low-rated broadcast networks.

But shows like "Supernatural" don't last for as long as they do unless they speak to something essential about us, and what Sam and Dean Winchester (played by Jensen Ackles and Jared Padalecki) represent. A main reason that "Supernatural" has lasted as long as it has and maintained the love of its varied fanbase for some of the same key reasons American audiences have deemed "Law & Order" timeless. Its case vary from week to week, with a few episodes here and there devoted to pushing its mythology forward.

The difference is that in its world, definitions of good and evil are fungible. Hell is chaos, but Heaven is a heartless place run by beings blindly following orders or defying them to take vengeance upon humanity. And in the cosmos' caste system, humans occupy a low rung.

This makes "Supernatural" a series that's as much about underdogs battling corrupt systems as it is about hunters confronting monsters. And in its divine justice system the perpetually screwed people are represented by two separate yet equally important men: Dean, a brawler with a winning sense of humor; and Sam, a college-educated adherent to reason. These are their stories.

The year in which "Supernatural" ends also coincides with conversations about what it means to be American and confronting hard truths about this nation's soul. In their own way, that's precisely what Sam, Dean, and their Earth-bound angelic ally Castiel (Misha Collins) and a Nephilim ward named Jack (Alexander Calvert) have been doing all along.

Sure, it's a buddy series set in a monster-of-the-week format. But the genre drama's main strength rests in how it taps into the enduring power of American story at its best and worst, even as it subverts popular notions to which millions cling, insisting that they make our culture great.

Mind you, the completely mundane reason that "Supernatural" lasted as long as it has is that many of its devoted fans grew up with Sam and Dean. That alone insures its comfort TV status among a millennials and Xers for years to come.

"Supernatural" is a fan-powered endeavor, the type of show that lends itself more easily to recaps as opposed to analysis, and with good reason. On the simplest level, it caters to a shared love for popular culture, incorporating numerous nods at classic film and TV. It's a horror series and a Western, and from time to time it's mimicked reality series, game shows and other TV formats. One of its best episodes places Sam and Dean inside of a "Scooby-Doo" cartoon.

Sam and Dean also represent the archetypical image of American muscle in every detail, a pair of flannel-clad guys roaring across America's highways in their father's 1967 Chevy Impala blasting hard rock. Even their resume is quintessentially American, in that they inherited the family business. In their case, that happens to be demon disposal.

Unlike Buffy Summers, our "Supernatural" heroes aren't underestimated when they walk into a room. On the contrary, the Winchesters are paragons of white American masculinity, played by heartthrob actors who aged along with their audience. Indeed, there's no getting around how white this show or its insistent colorblindness which, again, plays into a central tenet of the American story.

So, too, does its classic pairing of brains and brawn: Dean rarely sees a situation that can't be solved with firepower and fists. Sam attempted to run from his roots and attended Stanford. He would have gone to law school if destiny and Hell hadn't intervened, derailing his plans by pinning his girlfriend to the ceiling while immolating her, the same way demons killed Mama Winchester. Both have daddy issues at the beginning of the series and compete for the affections of their mother after she's resurrected in a later season. Family: it's a lot.

Series creator Eric Kripke originally shaped "Supernatural" as a drama about those emotional conflicts, much in the same way that "Buffy" is an extended metaphor for the horror of adolescence and early adulthood. Over its decade and a half of development "Supernatural" redefined what family means, with the series into an ensemble piece with Sam and Dean joined by Castiel and Jack.

And it is by no means a flawless show or consistent in quality. Entire seasons could be skipped without a neophyte missing a beat, since and many of its arcs recycle the same tensions between Sam and Dean, often treating Dean's rage as his superpower. Yet in the end redeems both of them, and Dean in particular, through a message that a hero's care is his strength, not his anger.

Taking all of this into account, it's no surprise that "Supernatural" appeals to both sides of the political spectrum, although it is particularly popular among Democrats. In the 2020 edition of E-Poll Market Research's annual list of top programs among viewers identifying as Democrats and Republicans, it tops the list of favorite broadcast TV series among Democrats, followed by "This Is Us." Among Republicans, it ranks sixth. ("This Is Us" is No. 1. )

As the presidential election heated up, Stacey Abrams thrilled its viewership by revealing that it is one of her favorite series, which, again, makes sense. For one thing, she's a romance novel author, and the show contains the same earmarks that enliven that genre, including lost love, thwarted ambition, rivalry and unrequited affection. Also, through its countless wades into the rich murk of urban legend, myth and magical lore "Supernatural" portrays a version of justice that's more reflective of reality. The good guys harbor no illusions about fairness and operate under the acceptance that whatever all-power entity may be watching over us is, in his better moods, absent. In the finale season, he's a petulant villain intent on erasing all of creation and starting over.

This contradicts the way most series that centralize a Judeo-Christian vision of cosmic order, with visions of benevolent angels ( a la "Highway to Heaven," which Sam and Dean reference time and again.) The God at the center of its universe first presents himself as a writer and later on, as he grows more callous, an entertainment generator, likening universes to shows he tires of and decides to cancel.

But "Supernatural" was never a religious tale. Based on the events of its penultimate episode, I would say it identifies, like most Americans, as spiritual, or perhaps aggressively humanist.

Moreover, the closer a person looks at this series the more they may realize how much of a crossroads it is for modern sci-fi genre, whether in terms of its casting or the behind-the-scenes forces shaping it. Strands of DNA of "Buffy," "Battlestar Galactica" and "The X-Files" are part of "Supernatural," as is "The Magicians," whose creator Sera Gamble was the "Supernatural" showrunner for Seasons 6 and 7, and "The Boys," Kripke's current series.

After 15 seasons and 327 episodes, "Supernatural" ends as the longest-running genre series in all of American broadcast TV. That puts it in the same ranks as "CSI," "ER" and "Criminal Minds," each of which also lasted for 15 years. The only other currently airing live-action series that have lasted longer are "Grey's Anatomy" (17 seasons), "NCIS" (18), and "Law & Order: SVU" (22).

All of these are procedural dramas, a durable format that in the right hands yields the kind of TV that a person can drop into whenever and regardless of how long they've been absent. This means that for entirely typical reasons "Supernatural" will remain in TV rotation for years to come via syndication and streaming services – it takes up a lot of real estate.

As for why people are destined to keep on returning to it, that merits deeper contemplation. Sam and Dean have matured and evolved along with the people watching them, and their separate journeys speak to the darkness hunkered down within each of us and our wider culture.

The American story insists we're a people uniquely capable of goodness, generosity and perseverance.  Lately the American reality demonstrates that as a nation the majority of us are only beginning to understand the monstrous darkness lurking underneath the thin skin of purported civility and claims of greatness.

If there's a lesson in "Supernatural," perhaps it was right there in front of us, all along, insisting that whatever is corrupting this land has to be confronted, reckoned with and banished, and only then can we rest. Until then, like its unofficial theme song insists, we wayward folks have no other choice but to carry on.

The series finale of "Supernatural" airs Thursday, Nov. 19 at 9 p.m. on The CW, preceded by the finale special at 8 p.m. Past seasons and earlier episodes of the current 15th season are streaming on Netflix.