"Boy, did we screw up": Charles Koch renounces partisanship while pouring money into Georgia GOP 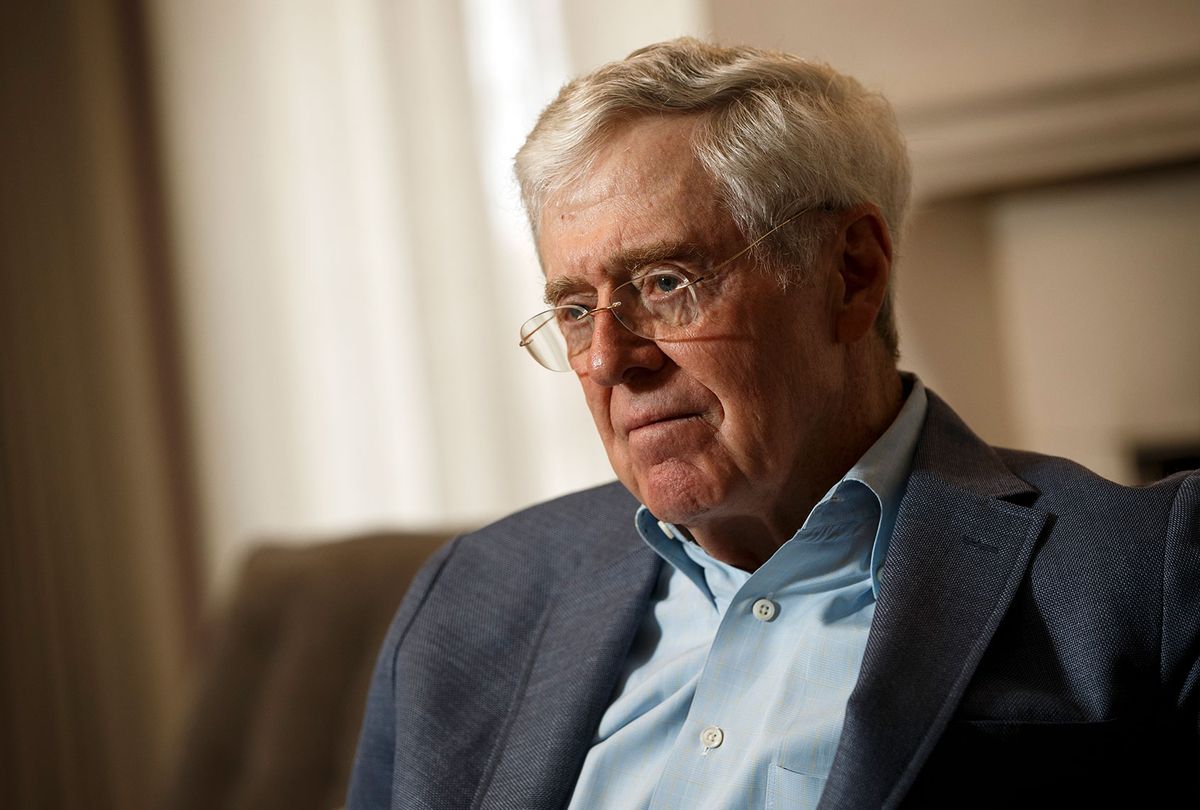 Republican megadonor Charles Koch, the billionaire industrialist whose untold millions in political contributions stoked the furnace of right-wing politics for the last decade, admits to "Axios on HBO" that he "screwed up by being partisan" in an interview set to air on Tuesday night.

"Some of the politicians we got elected — I would see them on TV, and they would be talking about policies that were antithetical: against immigration, against criminal justice reform, against a more peaceful foreign policy," says Koch, who along with his now-deceased brother David co-fathered and funded the anti-government Tea Party movement which led to the rise of President Donald Trump.

"I was horrified — because we had vetted them all, and they all seemed aligned on major issues and on empowering people," Koch claims. "And then once they got elected — I didn't expect them to fully agree with us on everything but to at least be champions on the major [issues] that they said they were. And then — to do the opposite."

Asked whether his complaint was based more on principles or results, Koch, who broke with much of the Trump wing of the Republican Party for the 2018 midterms, indicated the latter.

"We couldn't get results. The whole purpose of getting into politics was to find people who would help move us toward a society of equal rights and mutual benefit where people could realize their potential," he said. "And we were doing the opposite of it."

Koch said he wanted to help elect people who would "succeed by helping others succeed" in the wake of Trump's divisive administration.

"If 2020 has taught us anything, it's that the old ways of doing things aren't working," reads a description on the book's website. "But the solutions to our country's problems are all around us. If we're willing to believe in people, empower them from the bottom-up and unite with anybody to do right, we can work together to build a society where everyone can rise."

That rhetoric recalls the decentralized impression of the Tea Party movement, a national network which was mobilized by high-dollar Koch groups Americans for Prosperity and Freedom Works. The brothers also created the first national Tea Party website.

In defense of that work, Charles Koch has previously cited the movement's promulgation of "free-market, small-government ideals." Over time, those morphed into a revolutionary, anti-government furor which appealed to — and eventually empowered — some of the darkest urges on the far-right.

"Boy, did we screw up. What a mess!" Koch writes in his new book. "[P]artisan politics prevented us from achieving the thing that motivated us to get involved in politics in the first place — helping people by removing barriers."

The fiscally conservative ideals which first gave life to the Tea Party have in recent years gone largely ignored by conservatives, who have refashioned themselves in Trump's image — overseeing trillion-dollar deficits, limiting free trade and embracing government subsidy programs.

After Senate Republicans approved a massive 2019 budget bill, Sen. Rand Paul, R-Ky., eulogized the movement on the Senate floor. "The Tea Party is no more," he said at the time.

"I was slow to react to this fact," Koch writes in the new book, "letting us head down the wrong road for the better part of a decade."

Despite that outward renunciation of partisan politics, Americans for Prosperity Action — Koch's super PAC — is currently dumping hundreds of thousands of dollars into Georgia's twin Senate runoffs this January, which will determine partisan control of the U.S. Senate.

Koch's co-author, Brian Hooks, explained to Axios that the network had long backed Sen. David Perdue, R-Ga., the multimillionaire former CEO of Dollar General who last week was hit with a Senate ethics complaint amid allegations of using his office to profit from lucrative defense budget contracts.

"[W]e think that he can actually make a difference if he's returned to the Senate," Hooks said.

Koch, in the end, was not apologetic.

"I'm not big into regrets," he told Axios. "All the divisions today, we didn't create. They were there before, and they are there after."