Jarred apple butter — which is spiced with cloves, cinnamon and nutmeg — does the heavy lifting in this winter loaf 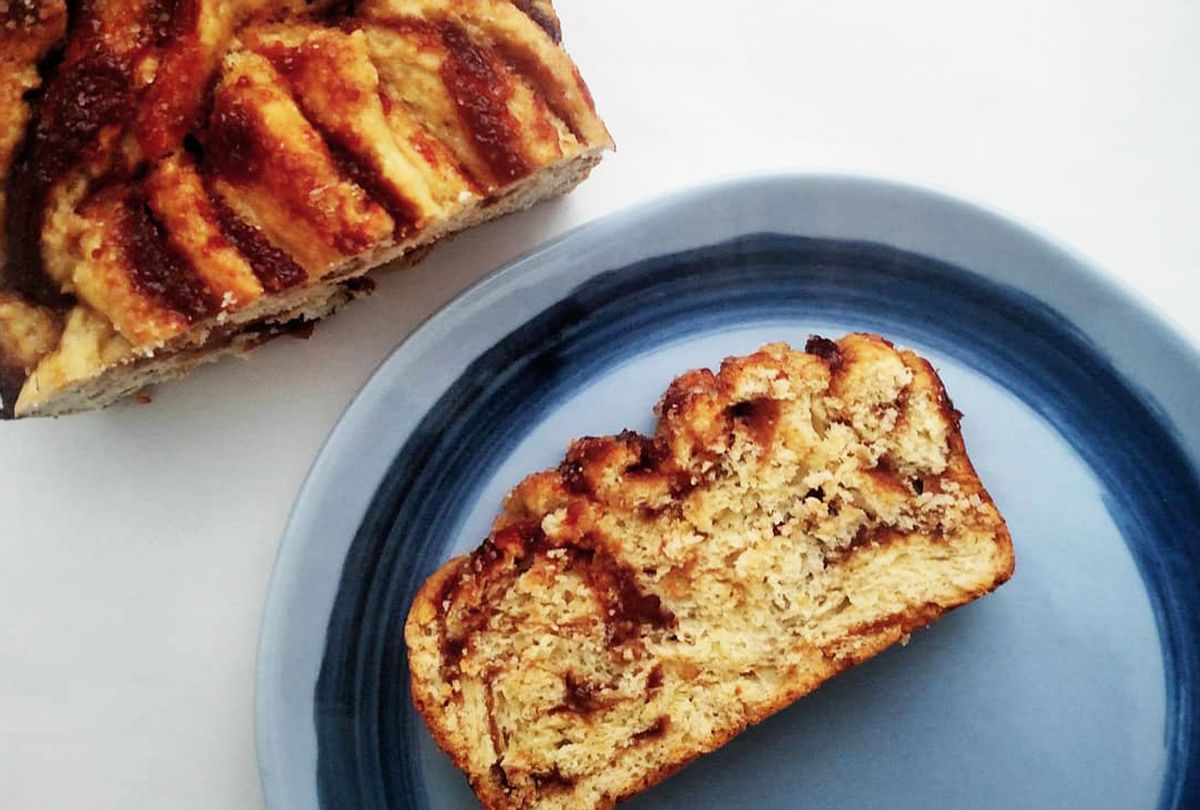 Apple butter is essentially caramelized apple sauce — a fruit purée that slow-cooks with water or cider until the apple's natural sugars turn a dark, toasty brown. The mixture is augmented with baking spices like cinnamon, cloves, nutmeg, and sometimes a dash of brown sugar for good measure, which makes it taste and smell like late autumn and winter baking.

It's a versatile preserve. Last year, as I wrote for Salon, I started experimenting with apple butter as an ingredient in cocktails after tasting Asheville's Corner Kitchen's twist on the French 75. Called the Fall 75, it featured gin, lemon and champagne with apple butter substituted in for the requisite simple syrup. That's not its only cocktail application.

As Corner Kitchen's general manager Rachel Henry Morgan said at the time, "Try it with bourbon and it won't disappoint."

But it also makes for a complement to baked goods — spread on biscuits and muffins, as the filling for old-fashioned apple stack cakes and doughnuts. It's simple, but one of my favorite ways to eat it is slathered on a good hunk of bread, so I decided to capitalize on my pandemic baking obsession and combine the two.

This braided apple butter bread is a simple play on babka, though you're only "braiding" two strands of dough, which places this soundly within reach for beginners. That said, the ultimate presentation of the loaf is stunning, with deep, caramel-colored swirls running throughout the bread and a glossy, sugar crystal-covered top.

And, of course, it's delicious. The eggy, sweet dough has a pillow-like texture, and each bite pops with the taste of slow-cooked fruit and spices.

1. In a large mixing bowl, whisk together milk, yeast and just a pinch of sugar. Let it rest for about 10 minutes until the mixture gets frothy. (This is how you know your yeast isn't dead.)

2. Meanwhile, whisk together flour, salt and sugar in a separate mixing bowl.

3. Add the eggs and the butter to the milk mixture and beat to combine. Slowly add the flour mixture in a steady stream.

4. Knead until a smooth, elastic dough ball forms — 5 to 8 minutes — using either your hands or a standing mixer with a dough hook attachment. If the dough is still a little sticky, add flour a tablespoon at a time.

5. Grease a separate large bowl with butter and place the dough ball inside. Cover with plastic or a light towel and let the dough rise until doubled in size. This will take about 90 minutes.

6. Once the dough has doubled in size, gently punch it down and place it on a floured surface. Using a rolling pin, flatten the dough into a  22x12" rectangle.

7. Cover the rectangle with the apple butter, leaving a 1-inch border all the way around, and roll the dough away from you, like you were forming a jelly roll. (Here's a good video, starting at 5:20, if you need a visual example.) Once rolled, place the dough onto a sheet pan and place it in the refrigerator for 40 minutes.

8. Once chilled, slice the dough log in half crosswise. You will have two identical halves. Place them next to each other, filling-side up.

9. Now, cross the dough strands in the center like you are forming an "X." Twist two ends on one side, then repeat on the opposite side, making a total of four twists. Tuck the ends on either side of the loaf for a neat look. Preheat the oven to 350, and transfer the bread to a greased, nonstick loaf pan.

10. While the oven is heating, brush the top of the loaf with the egg wash and cover with the turbinado sugar. Bake the bread for 50 to 55 minutes, turning the loaf pan halfway.

11. Remove the loaf from the oven and allow it to cool completely before turning the bread out onto a wire cooling rack.