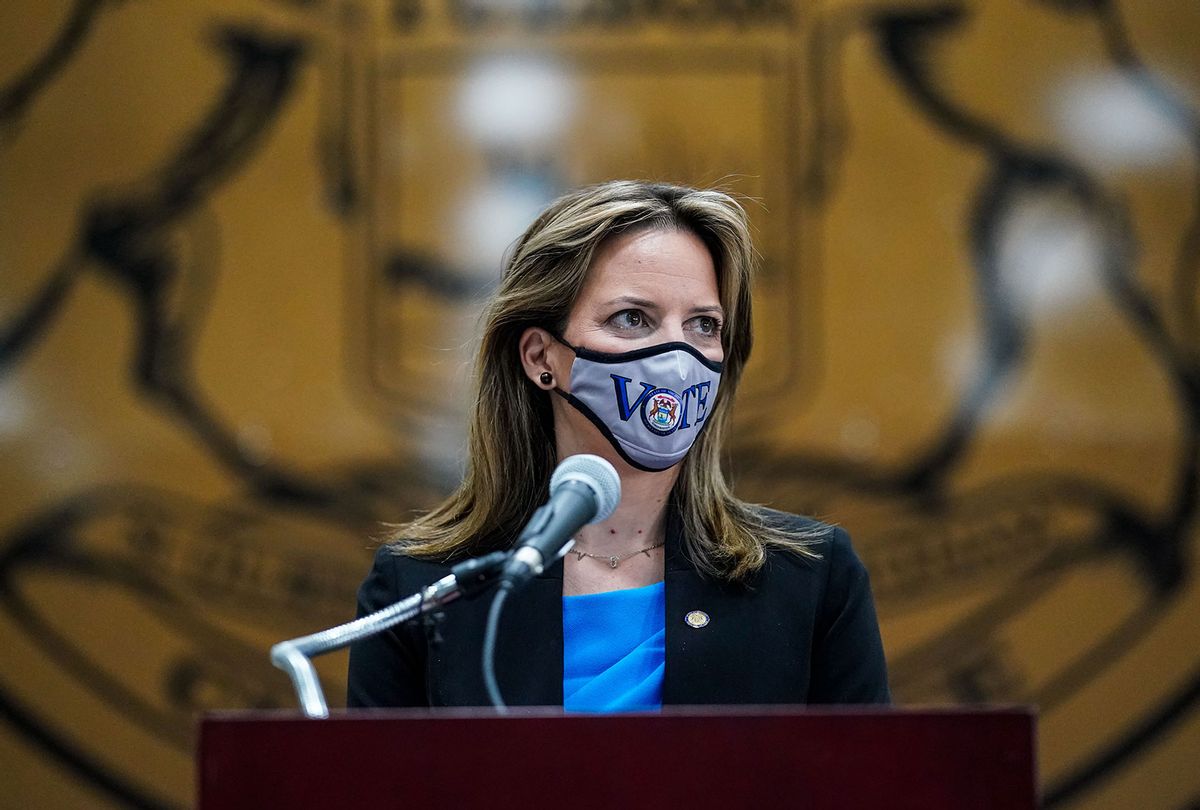 Authorities responded to a public disturbance call outside of Benson's Detroit home just before 10 p.m. local time on Saturday, Michigan State Police told MLive. Some of the protesters open-carried weapons, but police said the crowd dispersed once officers arrived. No one was arrested.

Protesters chanted "stop the steal" and demanded election audits, echoing Trump's unfounded claims aimed at overturning an election which he lost by a significant amount of votes. Unlike states with razor thin margins like Arizona and Georgia, Trump lost Michigan by more than 150,000 votes.

"You are not going to take this election from a man that has earned it completely 100% by a freaking landslide," one pro-Trump protester said in a livestream.

"At least one individual could be heard shouting 'you're murderers' within earshot of her child's bedroom," they said. "This mob-like behavior is an affront to basic morality and decency . . . Terrorizing children and families at their own homes is not activism. This disturbing behavior masquerading as protest should be called out for what it is and roundly condemned by citizens and public officials alike."

Benson, the state's top election official, said the threats did not only target her family but also all of the state's voters.

"The demands made outside my home were unambiguous, loud and threatening," she said in a statement. "They targeted me in my role as Michigan's chief election officer. But the threats of those gathered weren't actually aimed at me – or any other elected officials in this state. They were aimed at the voters."

Benson added that she and her four-year-old son were decorating their house for Christmas and about to watch "How the Grinch Stole Christmas" when the protesters descended.

It is unclear why protesters threatened Benson, since she announced that her office would conduct an audit of ballots in the entire state. Benson said the protest outside her home was an extension of Trump's attempts to discredit the election.

"Through threats of violence, intimidation and bullying, the armed people outside my home and their political allies seek to undermine and silence the will and voices of every voter in the state — no matter who they voted for," Benson said. "Their goal is to overturn and upend the results of an election that are clear and unequivocal, and that 5.5 million Michigan citizens participated in."

Vowing to protect and defend "every voter and every vote" from the baseless attacks, Benson hit out at Trump's legal team and the president's allies for pushing "bogus legal claims and so-called 'affidavits' that fail to allege any clear or cogent evidence of wrongdoing."

Trump's legal team has made unfounded claims of fraud and irregularities in court, which have been roundly rejected. They have since targeted Republican-led state legislatures in a flailing bid to pressure lawmakers to vote to appoint electors that would overturn the will of the voters.

Trump attorney Rudy Giuliani, who tested positive for COVID-19 after the hearing, appeared before the Michigan House Oversight Committee with discredited witnesses to allege fraud. Former Trump attorney Sidney Powell also filed a lawsuit seeking to overturn the results echoing Giuliani's claims. A federal judge rejected the lawsuit on Monday as "nothing but speculation and conjecture."

"Plaintiffs ask this court to ignore the orderly statutory scheme established to challenge elections and to ignore the will of millions of voters," US District Judge Linda Parker wrote. "This, the court cannot, and will not, do. The people have spoken."

Benson is the latest Michigan official to face threats amid Trump's torrent of falsehoods.

State Rep. Cynthia Johnson, who is Black, said she received multiple calls saying that she should be lynched.

Michigan House Speaker Lee Chatfield, a Republican, said he and his family, along with other lawmakers from both parties, have received "numerous" violent threats for "trying to do their job and help people."

Michigan's top statewide officials, who are all women, have faced protests and threats for months amid Trump's election falsehoods and attacks on coronavirus restrictions.

Armed demonstrators descended on the state Capitol, and protesters surrounded Gov. Gretchen Whitmer's home in April to protest pandemic restrictions. The FBI later said it had busted a plot by extremists to kidnap and murder Whitmer and other elected officials.

As Trump attempts to overturn the election in multiple Republican-led states like Georgia, the attacks have not been limited to Democrats.

Gabriel Sterling, Georgia's Republican voting system manager, slammed Trump and fellow GOP lawmakers for failing to condemn the violent threats after a young county employee was targeted with a noose just for doing a trivial part of his job.