After campaigning for transparency in COVID-19 case reporting, Jones' home was raided by armed agents 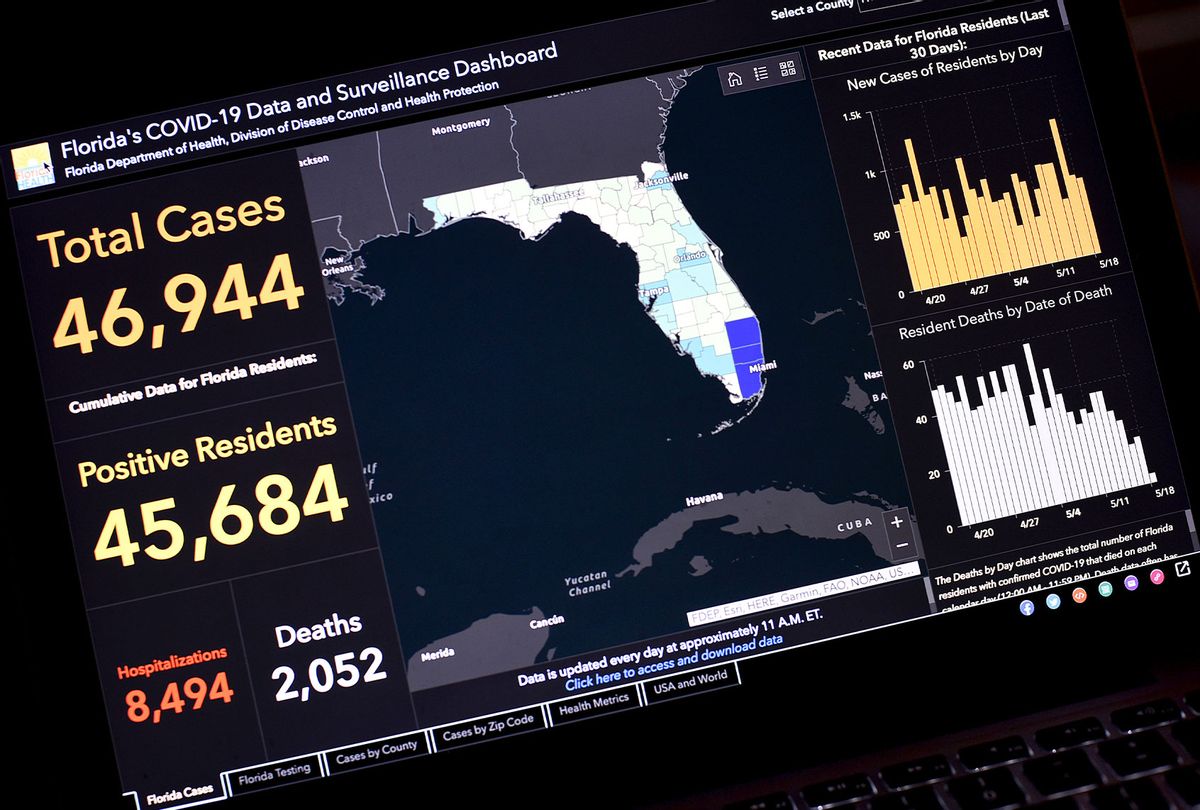 In this photo illustration the Florida's COVID-19 Data and Surveillance Dashboard is seen displayed on a computer screen. Rebekah Jones, the woman who created and ran Florida's online coronavirus data site, was removed from her job by May 5, 2020 for resisting efforts by the state Department of Health to make the data harder to access for the public, researchers and the media. (Illustration by Paul Hennessy/SOPA Images/LightRocket via Getty Images)
--

Rebekah Jones, a data analyst who was once in charge of maintaining Florida's online COVID-19 dashboard, never expected to be famous. As she spoke to Salon on Friday about her efforts to publicly challenge Republican Gov. Ron DeSantis' statistics about COVID-19 deaths and hospitalizations in her state — data that she says is highly misleading — she remarked on a recent police raid on her home, one that has put her in the national spotlight.

"It's really weird, I have to say, for a kid who grew up thinking that the world was this huge place and I was this tiny, small, insignificant piece of it," Jones mused.

On Monday, armed agents from the Florida Department of Law Enforcement (FDLE) forcibly entered her home to seize her computers as well as many other electronic devices. According to the warrant, Jones was accused of "hacking" for allegedly sending a message through Florida's Department of Health emergency communication tool asking people to "speak up" about censored COVID-19 data. Yet court records reveal that the person who accessed the system merely used a login that was shared by the entire department and had been posted publicly. Jones herself was not arrested and, some observers suspect, may not have been the primary target; the goal instead may have been to learn about anyone in Florida's government who is communicating with her to assist in her campaign for transparency regarding the COVID-19 crisis in the state.

The shocking armed raid on a public health official's home contributed to a climate among Florida health experts in which everyone is "afraid, terrified of [DeSantis]," Jones told Salon. "They saw what he did to me in May [firing her]. They've seen what he's done to me now. Who would not be terrified by that?"

Fortunately for Jones, she had the presence of mind to record the raid and later posted the video on Twitter, sparking widespread outrage. Among the incensed was Ron Filipkowski, a prominent Republican lawyer who resigned from the nominating commission for the state's 12th Circuit to protest the way Jones had been treated. (Filipkowski told Salon that, despite being a lifelong Republican, he voted for Joe Biden in the 2020 election because of his disgust with President Donald Trump.)

"It really wasn't just the raid," Filipkowski told Salon, although he added that "the raid is what triggered it." He explained that he had followed Jones on Twitter before the raid and supported her efforts to make sure that COVID-19 statistics in Florida were being accurately reported. Even so, when he first learned about the raid, he made a point of not automatically believing Jones' side of the story but of reading the warrant itself, since as a criminal lawyer and former federal and state prosecutor he reads search warrants every day.

After reading the warrant, though, Filipkowski said he was "even more shocked." As he explained, "the crime alleged is basically like a computer hack," and he has frequently defended people accused of that. Although the relevant statute is "broadly worded," its purpose is to prevent things like identity fraud, hostile third parties crashing servers and intellectual property theft. "The statute is not designed to prevent somebody from sending an email or a text message," Filipkowski pointed out. "So I just thought, 'This is completely ludicrous, that this is the crime that they're alleging to justify the search warrant.'"

He was also suspicious because the judge who signed it — and who had been appointed by DeSantis himself – had only been on the bench for a few weeks and had no background as a criminal lawyer. Additionally, Filipkowski was alarmed that the warrant "allowed them to go in and take all of her electronic devices, including her cell phone, laptops, zip drives." In addition it did not impose any limits on what authorities could do with Jones' property once they had it, even though "normally there's minimization language involved in extracting the information" to make sure authorities can only access materials pertinent to their investigation. "It was just basically a blank check, grab all her stuff and do whatever you want with it," he noted. Filipkowski also argued that DeSantis' later claim that he did not know about the raid in advance was "not credible" and "crazy 'because "FDLE is an agency that reports directly to the governor."

That governor has caught a lot of flak recently for his handling of the COVID-19 pandemic in his state. Following Trump's lead, DeSantis has ignored scientists and implemented more lax public health policies in the name of reopening the state's economy. He has done this even as Florida hospitals have been overcrowded and infections continue to surge. At the time of this writing, nearly 20,000 Floridians have died of COVID-19 and more than 1 million have been confirmed to have contracted the disease.

Not surprisingly, DeSantis' approval rating has taken a hit as a result: Although 66% of Floridians approved of his job performance as of December 2019, with only 26% disapproving, that number had fallen to 42% by October. Fifty-two percent of Floridians say that they disapprove of how DeSantis has handled COVID-19 and of his determination to send kids back to school, with 56% saying COVID-19 is the main problem facing their state.

In the midst of all this, according to Jones, DeSantis was ordering Florida health officials to cover up the true extent of the crisis facing Floridians.

"The manipulation is most prevalent in Florida with our statistics and reporting on death and hospitalization," Jones told Salon, accusing the governor's office of directly interfering with death and hospitalization reporting on several occasions. Among other things, she says that instead of automatically allowing hospitals to update data regarding COVID-19 deaths and hospitalizations, "they decided to wait until a death certificate had been received and signed by a medical examiner, and this essentially created a very long delay in how long between somebody died and when we were reporting it," creating an "infamous backlog" in the process. She said the government also twice changed how deaths were counted and later implemented a policy so that "every COVID-19 deaths not only had to be signed by a medical examiner where the person had a positive PCR [test] and lab results, there had to be an actual investigation into the death to determine if it was COVID-19 or not."

Jones also accused Florida of deciding in July, when the state's COVID-19 cases were "really bad," that when it came to ICU bed counts, "if you were in the ICU, but you did not require an intensive level of care, then that bed would not be counted as occupied." She also said that the percent positivity rate used in Florida "no other state in the country uses, and every single person who deals with this data or works with this data just ignores [it] because it's useless." Jones alleged that "according to the way that we came up with calculating percent positivity, that doesn't actually exist, we're only at 9% positivity."

Jones expressed concerns about data suppression to other Florida health officials while she still was in charge of the state's COVID-19 dashboard, emphatically accusing the department of downplaying the extent of the pandemic so that DeSantis could more easily reopen the state. In May she was fired; she claims it was because she objected to an order to remove critical data from the state's website, although DeSantis insisted it was for insubordination. (At the time that Jones was fired, a number of Florida media outlets were reporting that data had been taken off of the website and failed to receive direct answers as to why.) DeSantis also attacked Jones' character at the time, saying that she was the target of criminal charges for sexual cyber harassment (those were later dropped) and cyberstalking.

Yet despite DeSantis' attacks on her, Jones was shocked by the raid — although she had been warned.

"I received a tip late Sunday night that something was going down," Jones told Salon. "The language in it did not say 'They're going to bust down your door tomorrow morning.' It wasn't that overt, the language in it. The person sounded urgent as in, 'This is happening soon.'" She said that she spoke with her husband and mother afterward saying, "I might be arrested this week" and asking her mother to help with her family if that occurred.

"I did not think it would be literally the next morning," Jones added. She claimed that when the raid occurred, police officers entered with their guns drawn and even pointed them at her children. Recently released bodycam footage of the raid also shows Jones saying that the police were pointing guns at her kids; before that it shows the officers knocking at her door numerous times and demanding that they be allowed inside while pointing their guns at her home.

Not surprisingly, DeSantis has gone back to attacking Jones, denying again on Friday that he knew about the raid but admitting to knowing about the investigation. He also described Jones as "a darling of some corners of the fever swamps" and someone who has "got issues" and got snippy with reporters, accusing one of "editorializing." Jones, for her part, told Salon that she has been "blown away" by the amount of support that people have shown her since the raid, even telling Salon that she has received support from celebrities like George Takei, Gabrielle Union and Alyssa Milano.

"The longevity of the burst of fame is not sustainable," Jones said. "But for the period of time that I have it, I'm going to make sure that it is used to inform and educate people about what is going on with this crisis."