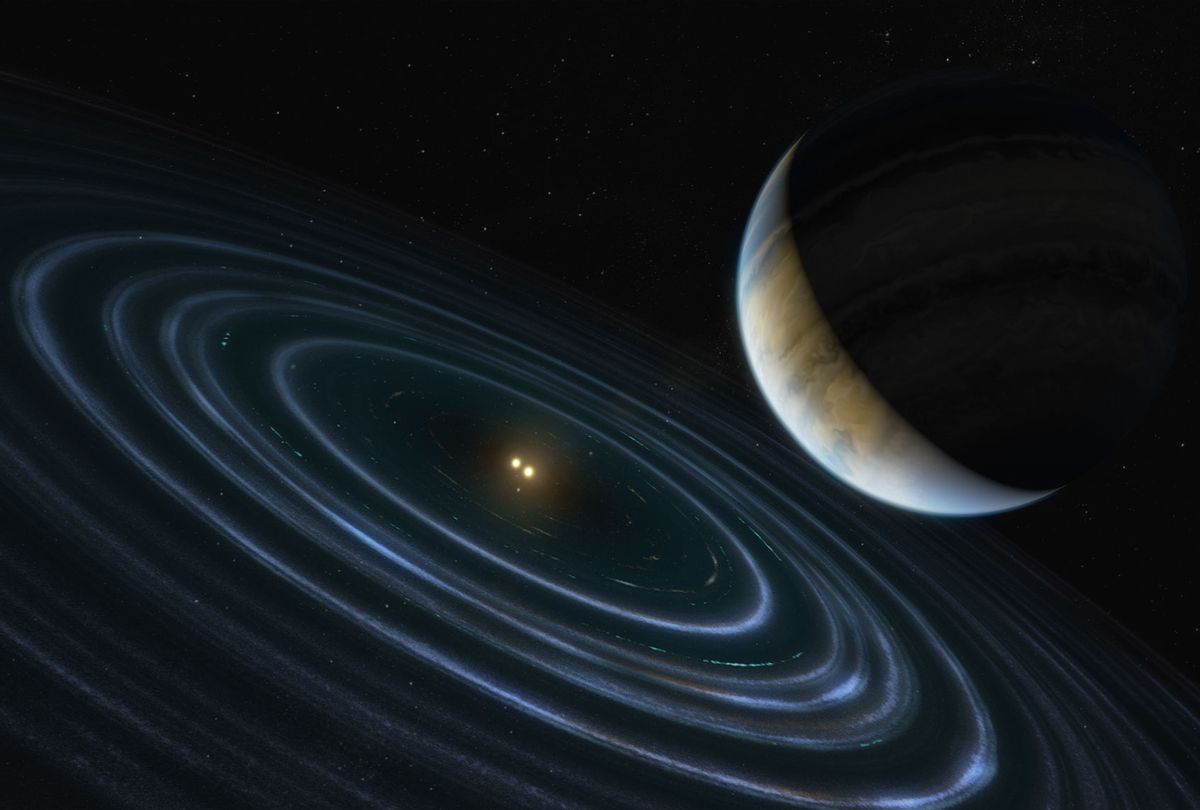 The 11-Jupiter-mass exoplanet called HD 106906 b, shown in this artist's illustration, occupies an unlikely orbit around a double star 336 light-years away. It may be offering clues to something that might be much closer to home: a hypothesized distant member of our solar system dubbed "Planet Nine." This is the first time that astronomers have been able to measure the motion of a massive Jupiter-like planet that is orbiting very far away from its host stars and visible debris disk. ( NASA/M. Kornmesser/ESA/Hubble)
--

Of all the planets that humans have discovered in other solar systems, most of them orbit close and tight to their parent star. That's partially due to the selection effect: the easiest-to-spot exoplanets (meaning a planet outside of our solar system) are those that are close enough to their star (or stars).

Hence, finding a planet that orbits really, really far from its parent star is a rare occurrence — so rare, in fact, that it's hard to do even in our own solar system. Indeed, there is much evidence that points to the existence of a massive planet far beyond Pluto's orbit, the theoretical Planet Nine; the problem is that it's been nigh-impossible to find.

This week, the discovery of a massive exoplanet 336 light-years away, one that's 11 times the mass of Jupiter, is renewing interest in finding Planet Nine and could hold some clues to its discovery. That's because the existence of this exoplanet, named HD106906 b, proves that the positioning of distant, massive planets in a solar system is not just possible, but provides hints as to how it might happen.

In a paper published this week, astronomers examined years of data collected by the Hubble Space Telescope on an exoplanet called HD106906 b. Astronomers first discovered the exoplanet in 2013 with the Magellan Telescopes at the Las Campanas Observatory in Chile's Atacama Desert. At the time, astronomers didn't know about the planet's orbit or its size.

According to the new paper, the exoplanet orbits its host stars (yes, that's plural — it's a binary star system) once every 15,000 human years. Hence, it also sits extremely far away from its host twin stars, 730 times the distance between the Earth and the sun. That's about 18 times further than Pluto is from our sun.

Another oddity about the exoplanet is how tilted it is in its orbit. To put in context: the sun and all planets in our solar system (and most solar systems) emerged from the same protoplanetary nebula, a swirling, disk-shaped gas and dust bubble, billions of years ago. Because they all formed from the same stuff moving in the same way, the planets in our solar system orbit on the same plane. (Imagine spinning a clay blob on a pottery wheel, and watching it spread out flat into a plate; that's roughly analogous to happens in solar systems as they form from nebulae.) Thus, you could look at the solar system edge-on, and everything lines up.

But HD106906 b doesn't follow that rule. Indeed, it has an "extreme orbit" that is very inclined and elliptical.

"To highlight why this is weird, we can just look at our own Solar System and see that all of the planets lie roughly in the same plane,"  Meiji Nguyen of the University of California-Berkeley, who led the study, said in a statement. "It would be bizarre if, say, Jupiter just happened to be inclined 30 degrees relative to the plane that every other planet orbits in."

Its bizarre placement in its own solar system raises many questions, but also could provide answers to the hypothetical Planet Nine in our solar system.

As I've previously explained, so-called Planet Nine is a hot topic in the astronomy community. In the past decade, many astronomers have proposed that perturbations in Uranus and Neptunes' orbits mean the existence of a world that has yet to be observed, or possibly some small, heavy exotic object like a micro-black hole. (Such a scenario would not be unprecedented: Neptune was discovered not through direct observation, but because astronomer Alexis Bouvard observed perturbations in Uranus' orbit and predicted the existence of an unknown planet, which turned out to be Neptune.) But according to the new paper on exoplanet HD106906 b, the scenario behind its strange orbit could provide an explanation behind Planet Nine.

"Despite the lack of detection of Planet Nine to date, the orbit of the planet can be inferred based on its effect on the various objects in the outer Solar System," Robert De Rosa of the European Southern Observatory in Santiago, Chile who led the study's analysis, said in a statement. "This suggests that if a planet was indeed responsible for what we observe in the orbits of trans-Neptunian objects it should have an eccentric orbit inclined relative to the plane of the Solar System."

"This prediction of the orbit of Planet Nine is similar to what we are seeing with HD 106906 b," De Rosa explained.

It's possible that Planet Nine was created in the inner solar system and then Jupiter kicked it out far beyond Pluto—but this is just a theory.

"The planet's orbit is very inclined, elongated and external to a dusty debris disc that surrounds it's host stars,"  Avi Loeb, chair of Harvard's astronomy department, told Salon via email. "In that sense, it resembles the orbit postulated for Planet 9 in the Solar system."

In a recent paper with his student, Amir Siraj, they suggest that a hypothetical Planet Nine could be the result of star clusters.

"They can capture planets that formed around other stars, especially if they have a companion star with them," Loeb said. "The captured planets would then be found on distant and highly inclined orbits, as exhibited by HD106906 b in this exo-planetary system and the putative Planet Nine in the solar system.

HD 106906 b's origins are still unclear: how did it get so far from its parent stars, and why is its orbit so tilted?

"We do not conclusively know where or how the planet formed," De Rosa said, referring to the exoplanet. "Although we have made the first measurement of orbital motion, there are still large uncertainties on the various orbital parameters. It is likely that both observers and theorists alike will be studying HD 106906 for years to come, unraveling the many mysteries of this remarkable planetary system."