Proud Boys' party is over: Trump fans throw tantrums because they've lost more than an election

Right-wing anger is exploding because they know they're losing — not just the election, but the larger culture war 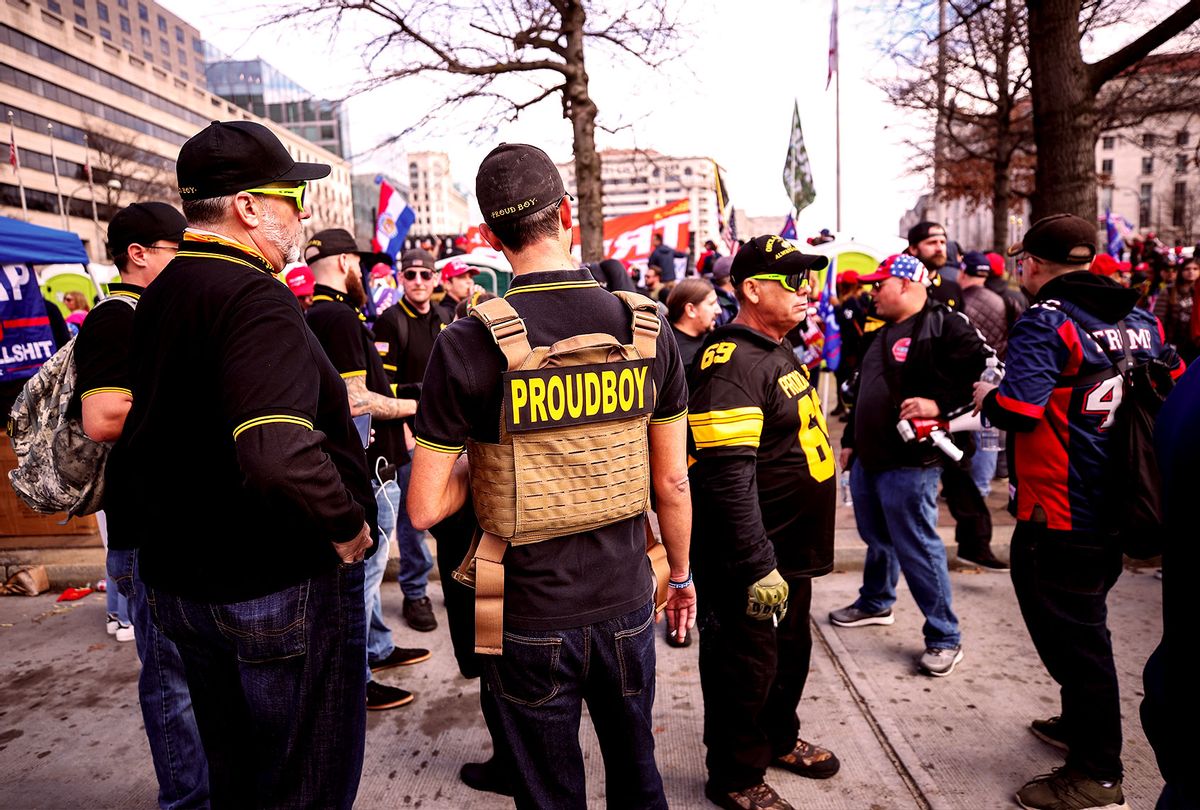 Pro-Trump protesters and Proud Boys gathered during the "Million MAGA March" from Freedom Plaza to the US Capitol in Washington, DC, United States on December 12, 2020. Rally held to back President Donald Trump's unsubstantiated claims of voter fraud in the US election. (Tayfun Coskun/Anadolu Agency via Getty Images)
--

In vino veritas, or perhaps more appropriately, in Bud Light veritas: These were the words that came to mind while I watched Saturday's Proud Boys riot in Washington, D.C.

For years, the Proud Boys have angrily resisted critics who say the group is racist, claiming instead to be for "Western chauvinism." Before the heat got to him and he quit, Proud Boys founder (and onetime Vice co-founder) Gavin McInnes described the group as being "alt-right without the racism." The Boys' insistence that they are absolutely, definitely not a bunch of racists even led to ugly infighting when a splinter group broke off over the refusal of group leaders to commit to overtly white nationalist beliefs.

But on one Saturday night in Washington, fueled by alcohol and rage over Donald Trump's electoral defeat, the pretense that "Western chauvinism" is not a racist ideology collapsed. After hours of drinking and ginning themselves up, the Proud Boys stole Black Lives Matter flags and targeted counter-protesters who were gathered in Black Lives Matter Plaza. A group of Proud Boys dramatically lit a large Black Lives Matter flag on fire, while flashing the "OK" sign, which of late has been appropriated by racists as a "white power" symbol. Vandalism at two historically Black churches, Asbury United Methodist Church and Metropolitan A.M.E. Church, is being investigated as a hate crime. Four people were stabbed in altercations between the Proud Boys and counter-protesters.

Saturday's rally was ostensibly about protesting Trump's loss and claiming that he was the victim of a "rigged" election. But with inhibitions loosened by booze, anger and literal (as well as metaphorical) darkness, the truth was illuminated: The rage about Donald Trump's electoral fate is about racism. It's a part of the growing fury taking hold of conservatives as their control over American culture slips further and further out of their grasp. Trump is just the latest vehicle for this anger, but this story is about a lot more than him. It's bigger even than electoral politics. This is about a more fundamental issue: over Who gets to define America, and the widespread reactionary outrage over being outnumbered by more liberal, more diverse and more cosmopolitan Americans, and feeling unable to stop the tide of progress.

Trump was able to amass an extraordinary 74.2 million voters with a message of resentment at "political correctness" and "woke" culture, a story about how conservative white people are supposedly being victimized by a changing America. But as much as that campaign whipped up millions of Americans, at the heart of it all was a misdirection. What conservatives really want is control over the culture. That isn't something that can be won at the ballot box, and they know it.

If the actual goal of the angry right were control over governance and policy, they should be thrilled by the past year.

Despite Trump's defeat, the GOP has maintained control over the Senate (pending the results of Georgia's runoff elections next month) and gained at least 10 seats in the House, nibbling the Democratic majority down to a bare minimum. They have also packed the federal courts so thoroughly that meaningful Democratic legislation may be impossible to enact for at least a generation. Unless Democrats can pull upsets in both of the Georgia races to be decided on Jan. 5, incoming President Joe Biden will be hamstrung by all-too-familiar obstructionist Republicans.

But instead of being happy or at least begrudgingly accepting what was mostly a win for Republicans, the right has exploded in rage. That's because Donald Trump's defeat was a reminder that no matter how much Republicans maintain power through a drastically tilted electoral playing field, conservatives are still, culturally speaking, a minority — and one that's shrinking rapidly, at that.

This is why right-wingers always act like angry losers, no matter how many political wins they stack up. There's a limit to how much cultural change can be reversed at the ballot box or even in the courts. Of course, the policy fights over police reform, reproductive rights, same-sex marriage and immigration matter quite a bit to real people's lives. But even when the right wins on policy, the cultural changes — racial diversity, women's increased equality, the mainstreaming of LGBTQ people — march on. That's why Proud Boys targeted Black Lives Matter iconography instead of, say, the offices of Democratic Party leaders or progressive think tanks.

The same weekend that Proud Boys were throwing a public tantrum in Washington, Cleveland's baseball team finally gave in to longstanding pressure and announced it would drop its venerable but racist name, the "Indians." The move comes after the NFL team in D.C. dropped its former name, which was a far more vicious slur against Native Americans. Trump, unsurprisingly, whined about the Cleveland decision on Twitter, calling it "Cancel culture at work," even though the team's private owners made the decision and its players will take the field next season as usual. Even in using that term, Trump tacitly admitted that his power as president, and as massive cultural icon to the right, can do nothing to stop the anti-racist pressure campaign that caused the name change.

Trump's ultimately futile war over the military's move to ban Confederate iconography and rename bases currently named after Confederate figures is similar. That's a lost cause, and not just because Trump will soon leave office and the military will just proceed with its plans under Biden. Military leaders are making these decisions themselves, reflecting changes that have already occurring within military culture as the services have become more racially diverse and more open to women.

There are any number of other examples. Even as the right keeps on railing against these cultural changes, it can't help but reflect them. For instance, Saturday's right-wing rally featured an extremely lame hip-hop act, juxtaposing right-wing cultural appropriation with overt acts of racism. But this seeming contradiction is just SOP for Trumpers. Trump himself would dance badly to songs by the Village People at rallies where he'd promise to appoint more right-wing judges to strip LGBTQ people of their rights.

What else are conservatives supposed to do? Have crap music at their events? Even "Western chauvinists" understand that if they limit themselves to white, straight, conservative-oriented music, they're doomed to host a lame party. So they borrow very heavily from the same cultures they view as an existential threat to "America."

Again, that's why right-wingers eternally act like victims, no matter how many electoral wins they rack up. "MAGA" was a promise to restore a fantasy version of an American white-bread past. The entire Republican National Convention was a lengthy whine about "cancel culture" and "political correctness," which are right-wing scare terms to demonize shifting social mores that reject open bigotry. The implicit promise was that, by electing Trump for four more years, he would make it socially acceptable to be shitty again. That promise turned out more than 74 million people.

Make no mistake, Trump did a lot of damage in four years: He wrecked the economy, unleashed a pandemic, made the lives of immigrants miserable and rolled back environmental protections — the list goes on. But he wasn't able to do the one thing that his supporters most dearly wanted, which was to remake the culture in their image. He couldn't do that in four years, and he wasn't going to do it in eight. It's not impossible to use political power to do such a thing — the Jim Crow South and Nazi Germany being the most obvious examples — but it generally requires heavy-handed state violence and censorship crackdowns that Trump flirted with but was never remotely able to implement on the scale necessary to fulfill those MAGA desires.

None of which is to say that everything will be just dandy now that Trump is leaving office. Racism, sexism, homophobia and other bigotries continue to be a major poison. Systematic racism still creates major inequalities in health, wealth and other social markers. To say that the culture is changing isn't to say that it has changed, and the right-wing assault on human rights is causing real people real pain every day. But none of these realities placate conservatives, who are still enraged that progressives continue to push for and often gain ground, especially in the cultural sphere.

And now a neofascist movement has been unleashed in the U.S. Trump's failed coup was, for him, about ego and power. For his supporters, however, it was a symbol of their long-term hopes of managing to wrest back control over the culture despite being both outnumbered and largely incapable of generating attractive cultural touchstones to lure other Americans to their side. The right is losing the culture war, and its anger over that will continue to grow, even as Trump himself is pushed out of the spotlight.