"It isn't even really a stimulus in my opinion": Economists lament paltry $600 checks to citizens 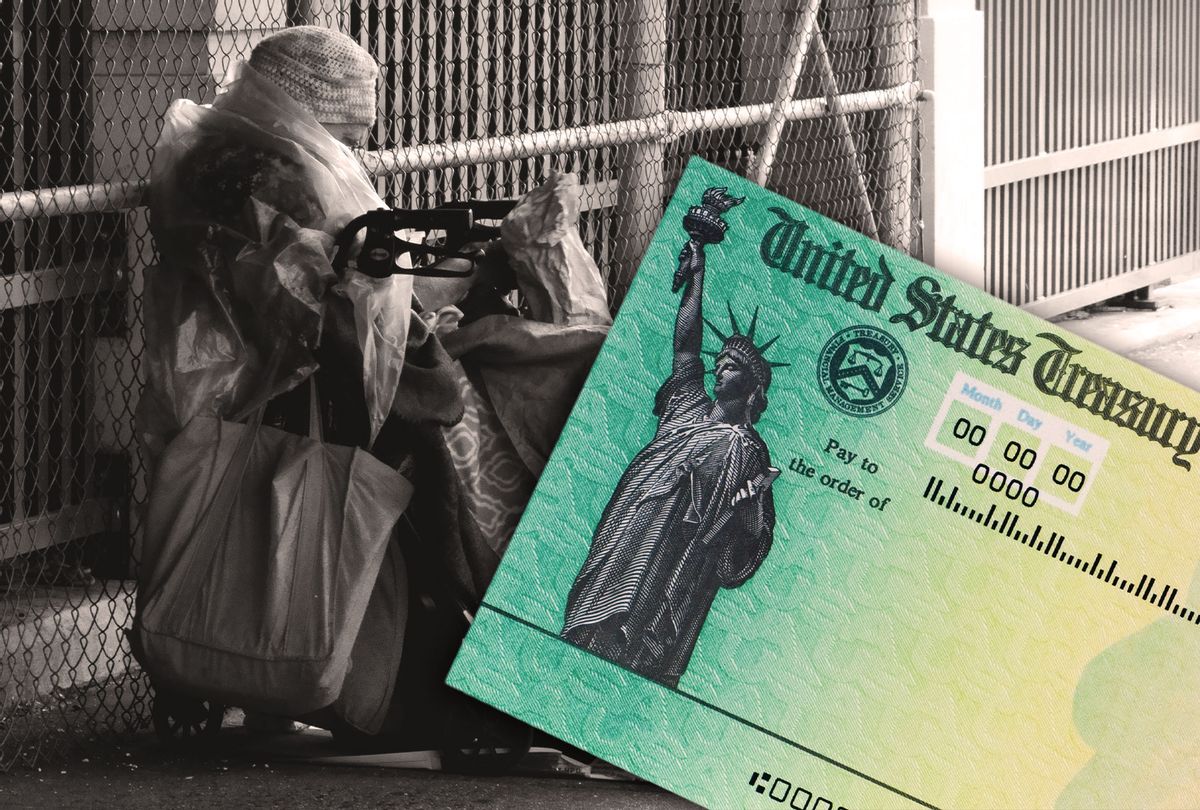 On Sunday night, congressional leaders announced that they had reached an agreement on a $900 billion stimulus bill that would issue $600 checks to every American whose income fell below a certain threshold. By Tuesday, the bill had passed.

Public reaction to the meager stimulus bill was swift and angry. David Sirota of The Daily Poster tweeted that Biden had worked with Senate Majority Leader Mitch McConnell to "halve" the bill and accused him of "longtime austerity zealotry." Author and small business owner Dan Price tweeted that the bill does not do enough to help small businesses, noting that the first stimulus bill did nothing to help small businesses re-open. Forbes Advisor journalist Natalie Campisi tweeted that the bill was "too little too late" and that "this was all very disappointing as so many people are struggling needlessly."

So why can't the richest country in the world do better for its struggling citizens? Economists speaking to Salon said the underlying problem is that America's government does far less than many other countries to protect the working class.

For instance, France has so far passed two legislative packages that provided more than $389 billion of relief to help small businesses negatively impacted by the pandemic. France also worked with Germany to make sure that the European Union provided $608.2 billion to businesses, workers and government institutions that were financially struggling as a result of the virus. Germany, meanwhile, is expected to supply $26 billion of relief to small businesses and self-employed individuals between January and June 2021. In November the country paid more than $17 billion to help businesses negatively impacted by the lockdown.

But most importantly, these countries passed stimulus measures that almost completely prevented pandemic-related unemployment. Specifically, Germany and France "subsidized the continued employment (or payroll status) of most employees," thus avoiding a massive increase in unemployment as happened in the United States, Dr. Richard D. Wolff, professor emeritus of economics at the University of Massachusetts Amherst, wrote to Salon. "The latest 'stimulus' bill adds too little to unemployment payouts to change the fact that since March over 60 million US workers (more than a third of the US labor force) have had to file for unemployment compensation for some or all of the last 9 months," he continued.

Wolff added that as a result of America's inadequate protections against unemployment, "the working class is tapped out here far worse that European countries."

Wolff was not alone in expressing this view.

"In general the USA has had the largest discretionary packages passed this year, larger than the new packages passed in France or Germany," Dr. Gabriel Mathy, a macroeconomist at American University, wrote to Salon. "However, partially that's the result of a very stingy unemployment insurance program in the USA, which needed to be expanded in the crisis much more than in France, for example."

Constantine Yannelis, associate professor of finance at the University of Chicago Booth School of Business, explained to Salon by email that while most countries have passed stimulus bills that provide direct cash payments, loan guarantees and assistance to small businesses, "other countries had institutional advantages in terms of making payments directly to households and businesses. For example, kurzarbeit — or short-term working arrangements in which the state makes up for part or all of lost wages for private sector workers that agree to or are forced to accept work and pay cuts — allow companies in many counties to temporarily reduce house for workers rather than laying them off."

He added, "Germany and Austria have kurzarbeit programs. Those have been in place for some time and kick in during recessions."

The new US stimulus bill, which is expected to be incorporated into a larger legislative package to maintain government funding for the rest of the fiscal year, is believed to include direct payments of $600 to American adults and children. In addition, it will provide businesses with $284 billion of relief, re-establish a federal loan program for small businesses called the Paycheck Protection Program and spend $25 billion on rental assistance and extending the eviction moratorium. It also includes $82 billion in aid for education providers like colleges and schools and will offer unemployed Americans $300 in weekly supplemental federal unemployment benefits for an additional 11 weeks and grant extensions to federal payments for Americans whose regular benefits have expired.

"It isn't even really [a] stimulus in my opinion," Austan Goolsbee, who served on President Barack Obama's Council of Economic Advisers, wrote to Salon. "It isn't [going] to jump start growth. It's disaster relief to prevent permanent damage and hopefully keep things from getting worse. But if we can't get control of the spread of the virus, it's just going to be a matter of time until we need another relief bill."

Michaela Pagel, associate professor of business at Columbia Business School, explained that the specific conditions of the 2020 economic crash make it more difficult for stimulus to be effective than was the case during the downturns in 2001 and 2008.

Pagel said that the "consumer spending response" was different in 2020, compared to 2001 and 2008 stimulus payments. "We find that individuals consumed more non-durables (food for instance) rather than durables (electronics or furniture)," in 2020, Pagel wrote to Salon. "The reason is that mostly Americans in need spent large fractions of the checks immediately, whereas other Americans saved most of the checks."

Goolsbee made a similar point, telling Salon that "previous stimulus bills were attempting to jump start the economy in a downturn created from a normal economic cause." Yet this recession was "the first recession caused by something that had nothing to do with the economy," meaning that previous lessons don't apply. Goolsbee also said it was a mistake for stimulus to not include assistance for states, since when their revenue declines they will have to spend more money on automatic programs like Medicaid. This, in turn, "will force them to raise taxes and cut employment due to balanced budget requirements, and will potentially make the downturn longer and more painful."

According to Wolff, American policymakers should both acknowledge the new conditions created by the pandemic and learn from past economic programs that helped the working class, in particular the New Deal. The New Deal was a series of public works programs, regulations, financial reforms, labor protections and other progressive policies passed during President Franklin Roosevelt's administration in the 1930s. Wolff argued to Salon that, because the economy is locked down, stimulus packages that merely focus on increasing the "demand" side of "supply and demand" will not be enough.

"Demand expansion is not enough because the pandemic blocks the supply of goods and services because it is not safe to produce them or to distribute them," Wolff explained. "The successful federal jobs programs of the 1930s could and should have been replicated now with the proviso of safe social distancing, constant testing and disinfecting, etc." He pointed out that under the New Deal, the increase in taxes on corporation and the wealthy redistributed income and in the process increased purchasing power. Similarly, "the subsidization of mortgages and the minimum wage made demand stimulation also wealth redistribution." The government intervened with regulations and controls to pick up the slack left by the private capitalist sector. The mistake, Wolff says, was that the New Deal still left enterprises in the hands of private capitalists, meaning that "they could and did push back and slow, distort or block government stimulus. They worked effectively to undo The New Deal from the moment it began. That error should not be repeated now."

The current stimulus bill has its origins in a $908 billion package proposed by a bipartisan coalition of centrist senators earlier this month. Their proposal would have included $300 a week in federal unemployment benefits for four months and $160 billion in funding for state and local governments. The stimulus bill passed in March, known as the CARES Act, provided taxpayers who make less than $75,000 each year with $1,200 in direct cash payments, an additional $500 for every child in their household, expanded the eligibility criteria for unemployment relief, extended benefits by 13 weeks and increased maximum unemployment benefits by $600 per week.

Notably, President-elect Joe Biden has said that he will advocate for additional stimulus checks in future legislation, meaning perhaps the incoming administration has taken economists' warnings to heart.