Dickens, refrigeration and New World turkey: Behind the decline of the traditional Christmas goose

The bird that used to dominate holiday tables became a ghost of Christmas past, but some say that is changing 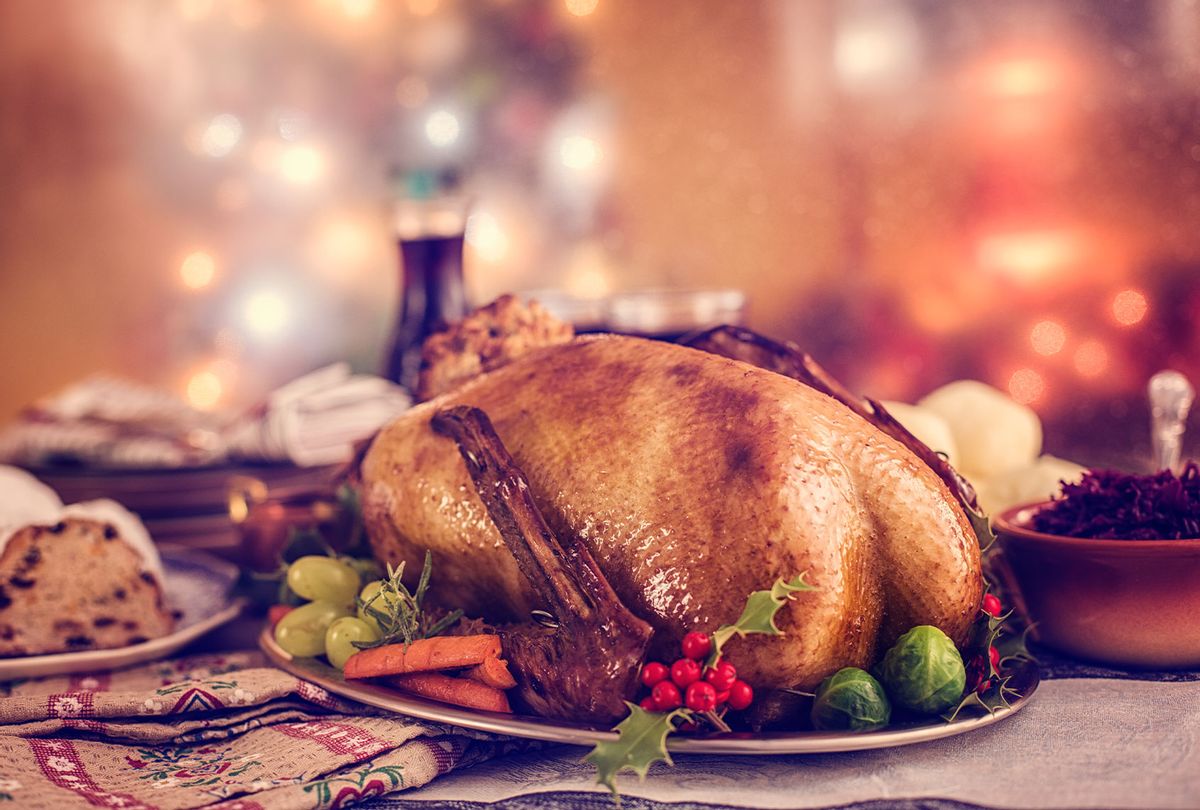 There never was such a goose. This line, found in the third chapter of "A Christmas Carol," greatly contributed to my childhood understanding of a traditional Christmas dinner. Bob Cratchit, Ebenezer Scrooge's underpaid clerk, remarked that "he didn't believe there ever was such a goose cooked. Its tenderness and flavour, size and cheapness, were the themes of universal admiration."

It was a celebratory dinner — the goose, which would have been a rarity in the household, was served with applesauce, mashed potatoes and gravy — and was sufficient for the entire Cratchit family. When Scrooge, accompanied by the Ghost of Christmas Present, looked in on the family, he was struck by how contented they seemed.

That scene always appealed to me, because traditions surrounding my family's Christmas dinner always were — and still are — pretty fluid. We try new things on for size every year: honey-baked ham or lasagna one year, turkey and the trimmings the next. Last year, I made oxtail and orzo, while this year I'm undecided.

For those who could afford it in Victorian England, these annual questions did not really exist — goose was it. It was a main dish steeped in centuries of tradition, further mythologized by Dickens' portrayal. He was "the man who invented Christmas," after all.

But somewhere along the way, that Dickensian ideal fell by the wayside. When I polled friends who are based in both the U.S. and the U.K. about their typical Christmas main dish, there were several common responses: ham, turkey, and roast beef. Goose wasn't on anyone's shopping list.

So, what happened? How did the poultry that used to dominate holiday tables become a ghost of Christmas past? It's a multifaceted downfall — one which can be attributed to biology, refrigeration, New World availability and Dickens himself. In an unprecedented year, some home cooks are now giving it a second look.

For centuries, roast goose had been a traditional element of winter feasts. The observance of Saint Martin's Day, or Martinmas, dates back to the Middle Ages; geese became a symbol of the saint — who is the patron saint of beggars and vintners — because, according to church lore, Martin of Tours hid in a pen of geese to avoid being ordained bishop.

Ultimately, their cackling gave him away.

Martinmas also takes place on Nov. 11, and it was widely celebrated as the start of winter, which coincided with seasonal preparations, such as the butchering of animals like geese. Geese are natural foragers that once domesticated, were often turned loose in fields to find and eat the scattered grain left behind by harvesters. They were at their largest post-harvest — just in time for the feast.

Geese are still typically consumed either in the spring, when they are young, and then in the winter, when they are fattened. Because of this, many families in Victorian England would budget throughout the year for a Christmas goose.

This led to a rise in Goose Clubs, to which someone like Bob Cratchit would have likely belonged. According to "The Holiday Book for Christmas and the New Year," a series of periodical extracts that was bound and published in 1852, these clubs were often established by public house owners.

"The members pay a shilling a week for eight to ten weeks before Christmas, and in addition to a goose, are generally entitled to a bottle of gin for their ten shillings," it said. "Right proud is the landlord to show his prize geese to his customers; and great delight does he take in telling them about the number of miles he travelled by rail, of the bargain he made weeks before to be supplied with geese of the first quality at so much per head, and 'not to be done,' he examined them all."

Cratchit earned about 15 shillings a week, so in total the goose was not a small expense — especially when factoring in London cost of living and the expenses associated with caring for seven children — but the week-by-week payment plan made it attainable for many families. Those same families were not typically wealthy enough to have ovens in their homes, so pub owners or bakers would offer to cook their birds for a fee.

Did Dickens kill the Christmas goose?

Some actually point to the final chapter of "A Christmas Carol," when a reformed Scrooge presents the Cratchits with a huge prized turkey, as the beginning of goose's end. It was then viewed, in comparison, as a poor man's dinner. But Dickens was likely just recording dietary preferences at the time.

Turkeys are not native to England. They were likely brought back to the country by the 16th Century merchant William Strickland after a visit to the Americas, so they were still viewed as slightly exotic in the 19th Century. The taste profile is completely different, as well. The biological makeup of turkey means that they have more white meat than geese.

Geese also have a lot of fat, which dissolves and drips as they cook. While you can typically feed eight adults with an eight-pound turkey, it is suggested that you plan to purchase a bird that is twice as heavy to feed the same amount of people since it doesn't have quite as much edible meat after being roasted.

For a very long time, they were kind of an aspirational dish in England — but there was a big shift after WWII rationing ended. Modern refrigerators started being mass-produced, and it was possible for home cooks to actually purchase and store big birds like turkey.

This dovetailed with a rise in industrial farming in both the U.S. and the U.K.

"I think that's maybe partly why, especially in the U.S., commercial rearing has, on an industrial scale, always looked at turkey first," food historian Ken Albala said. "Turkeys are easier to raise. They can grow bigger breasts and don't take as much feed to become fat as waterfowl."

He continued: "If you have small farms, you can have a handful of geese in a pond, because they need water to be happy. And that's just not something that you can easily do in a big industrial sheds, in the way that we raise chickens and turkeys."

Once turkeys started being raised on a factory-scale, the price dropped immensely.

"Turkey just turned out to be so cheap to raise that, you know, we have ground turkey and turkey bacon and turkey burgers for people who don't want to eat red meat," Albala said. "But geese are just too expensive, which is a shame, because they are so much more interesting than turkeys. Turkey is kind of the most boring of meat, while goose is richer and it's got more fat on it. I think it's as good as food gets."

According to the British Turkey Council, 75% of British home cooks will roast a turkey for Christmas this year, while 1% will have goose. Meanwhile, in the U.S., roast goose never really took off. Wild turkeys were plentiful, and while it was common for colonists to hunt Canada Goose, they were soon hunted to near extinction. After being rediscovered in the 1960s, they were put under stricter hunting management. And while the English who settled in America ate goose for a while, their tastes eventually assimilated to what was available.

For a while, it seemed like the future of the goose was cooked.

Is goose due for a comeback?

Starting in 2000, several publications began speculating about whether goose was going to begin reappearing on holiday plates. By winter 2010, the Los Angeles Times reported that 240,000 geese were headed to market in the U.S. — up 65% from 2000.

"While goose remains a specialty item, sourced from a few gourmet-product wholesalers or from farmers who raise less-popular birds, the numbers are starting to add up," Charles Passy wrote for the Wall Street Journal in 2017. "D'Artagnan, a New Jersey-based gourmet company that sells goose to restaurants in the city as well as directly to the public via mail order, says it expects orders for about 2,800 birds this holiday season — an increase of 27% over 2016."

Jim Schiltz is the president of Schiltz Foods, Inc., the largest goose producer in the Americas. They provide 85 to 90% of the geese on the American market. Aafter experiencing three years of losses in the mid-2000s, they now process 6,000 to 7,000 birds a day.

But winter is still, by far, their busiest season. "Christmas will always be the main focus," Schiltz said, followed by the Chinese New Year and then some Orthodox Easter celebrations.

The farm's full raw goose is still by far the company's most popular item, but according to Teri Metz, Schiltz's marketing specialist, other smaller items — like their sliced smoked breast pieces and smoked goose legs — have seen an uptick in interest this year (likely due to the pandemic, in part).

"I think it's because people are having smaller gatherings," she said. "So we're noticing that a bit more."

More people may also be flocking to goose, because it gives them a taste of something different in an unprecedented winter, while also conjuring images of more "traditional" Christmases. Food historian Ken Albala is one of the Americans who has purchased a goose for the  holiday.

He purchased a frozen one from a speciality grocery store in Stockton, Calif., for $60 — about $5.99 a pound (the average frozen Butterball Thanksgiving turkey cost $1.09 this year). He has made this a Christmas tradition for the past several years.

"And often what I do is cure it," he said. "So I'll add salt and sodium nitrate and make a kind of prosciutto out of it, which is aged, or I'll just cure it and smoke it, which is absolutely delicious."