Mark Meadows has skeletons in the closet — dinosaur skeletons, to be precise 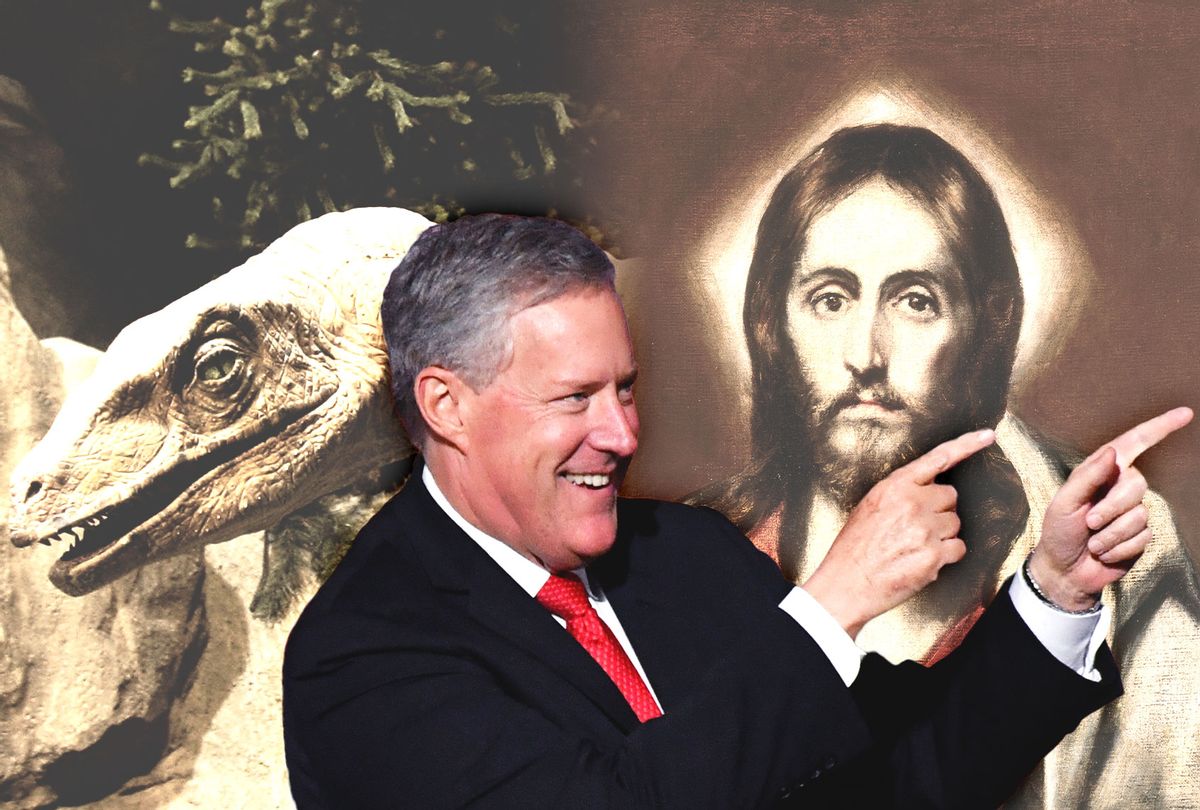 Last week, Lin Wood, a right-wing Georgia attorney who has recently inserted himself into Donald Trump's failed crusade to rewrite the results of the election, attacked White House chief of staff Mark Meadows for reportedly shooting down a number of harebrained, illegal strategies to hijack victory floated in an Oval Office meeting last weekend. (Wood also represents Kyle Rittenhouse, the young man accused of shooting three people, killing two of them, during a Black Lives Matter protest in Kenosha, Wisconsin.)

"Someone needs to do a deep dive on @MarkMeadows," Wood wrote on Twitter. "I have heard there are some serious skeletons."

In a sense, Wood is correct about skeletons — as well as about digging deep. Meadows, a former Republican congressman from North Carolina, had since at least 2018 apparently failed to disclose a loan and monthly income of $11,000 related to the sale of a deed to a Colorado fossil park dedicated to promoting the creationist fiction that humans coexisted with dinosaurs.

Though Meadows has not been cited for this apparent violation, it would not be his first breach: The House Ethics Committee sanctioned Meadows in 2018 for failing to respond appropriately to sexual harassment allegations made against his former chief of staff, and for paying the alleged harasser more than $40,000 in taxpayer money when the staffer was no longer employed in Congress.

Further, Salon reported earlier this year that Meadows appears to have misused congressional funds again in 2020, this time to help a friend of his wife raise money for her failed campaign to fill Meadows' congressional seat. Additionally, the government watchdog group Citizens for Responsibility and Ethics in Washington has filed a complaint accusing Meadows of campaign finance violations, based on a previous Salon report.

But at the time of the dinosaur-park purchase, first reported last year in The New Yorker, Meadows was still just a restaurateur and aspiring real estate baron, devoted to teaching his home-schooled children the tenets of fundamentalist Christian creation science. Not only did Meadows score the real estate deal, he also appeared in a documentary about what turned out to be a fake discovery of a real allosaur, which is currently on display at a creation science museum as a purported piece of scientific evidence that the Big Bang never happened.

In May 2002, Meadows, who is a fundamentalist Christian, took his family on a dinosaur fossil hunt for homeschoolers, with the intent to "discover what the Bible says about dinosaurs and the Great Flood." The expedition was organized by a group of self-identified "creation scientists" who contend that dinosaurs walked the earth with human beings, and that their extinction was caused by the great flood of Noah's time, which was no more than a few thousand years ago.

The Meadows family joined a group of about 30 other homeschoolers on the expedition, which traversed a nearly 100-acre park in Dinosaur, Colorado, owned by creation scientist Dana Forbes — property that Meadows himself would purchase just five months later. The trip was led by two creation science groups, who had each promoted the event as a recruiting tool.

The first group, Creation Expeditions, was a family-run operation out of Florida, headed up by patriarch Pete DeRosa, who had a contract with the landowner to carry out six such tours a year. According to its now-defunct website, Creation Expeditions held to the belief that "God created in six literal consecutive 24-hour days, the heavens, earth, and all that is within them. We believe in a young earth that is not more than 6,000 years old."

Creation Expeditions marketed the expedition as "the Dragon's Den Dig," an allusion to the creation-science contention that all dinosaurs are dragons (although, strangely enough, not all dragons are dinosaurs). Promotional materials promised that participants would work with "a professional excavation team" in "the famous Dinosaur Triangle," a nickname bestowed on the fossil-rich Colorado region by actual paleontologists.

The second expedition was headed by Doug Phillips, president of Vision Forum, a San Antonio-based group that published a popular online and print catalog of books and videos aimed at homeschoolers. The catalog had promoted the 2002 fossil hunt — priced at $995 per person — next to a book entitled "The Great Dinosaur Mystery Solved" by Ken Ham of the Creation Museum and Ark Encounter, who would go on to purchase the deed to the dinosaur park from Meadows. (Ham's concerted campaign to undermine modern archaeology was documented in a Salon report from August 2005, published the day the levees broke in New Orleans.)

Julie Ingersoll, a religious studies professor at the University of North Florida, told Alabama.com for a 2017 article on then-Senate candidate Roy Moore that Phillips and Vision Forum were "extreme and far outside the mainstream of organized religion." Moore had faced scrutiny that year for his connections to Phillips, including for participating in a 2011 textbook which argued that Christians are morally bound not to vote for women, and that women should not work outside the home or vote, among other activities.

(Phillips resigned from Vision Forum after confessing to an affair with a girl who later alleged in a lawsuit that Phillips began grooming her when she was fifteen.)

The documentary was Phillips' idea. The movie, "Raising the Allosaur: The True Story of a Rare Dinosaur and the Home Schoolers Who Found It," was intended to show homeschool students discovering an allosaur skeleton, believed to have lived about 150 million years ago, which the children would then "scientifically" prove had actually died 6,000 years ago in the Biblical flood.

Meadows and his family, including his wife, mother and two children, make appearances throughout the video, but Meadows nabbed a pivotal role. On the final day of the dig, the narrator (identified as "Winston MacArthur," but really Doug Winston Phillips, who also plays himself in the film) laments that it appears the troupe will not find an allosaur — but a voice comes over Phillips' walkie-talkie: "Hey Doug, we've got a claw up here!"

Phillips rushes to the discovery site, where he finds future White House chief of staff Mark Meadows and his daughter Haley, then 9, whom a Vision Forum press release would later credit for the find: "Nine-year-old home schooler Haley Meadows was dusting away dirt with her brush when she found the claws to a 100-foot Sauropod, presently believed to be of the rare Ultrasaurus variety."

Phillips and Meadows then engage in a dialogue.

Phillips: Mark, I understand that we found a little something here.

Phillips: Tell me what happened.

Meadows: Well, my daughter Haley and I, we were working towards the end of the day here, just trying to get just one last bit of rock out before we finished. And so she was back-digging, and we were taking the brush and trying to take some of the sand out and all the sudden we spotted a little bit of bone, we thought, and we found a claw.

Phillips: Do you think you'll be finding others?

Phillips: Good, I like that. Hey, that must have been very exciting.

Meadows: It has been exciting. This has been the trip of a lifetime.

The narrator then explains that the discovery has changed the course of the excavation, delivering a "resurgence of hope" that rallies the diggers to find the allosaur's skull. The group turns to prayer, beseeching Jesus to "bring forth the skull for the glory of God," so that they may shatter "the lies of evolution."

In no time the skull is found, and along with it "deposits of partially fossilized and unfossilized organic material," according to the narrator, the existence of which "clearly points to a recent deposition."

The narrator concludes: "The search for the allosaur is over, but God has answered their prayers and given them yet another devastating evidence for rapid burial, recent deposition and the Biblical Flood Model."

Vision Forum posted "Raising the Allosaur" for sale just in time for Christmas. It cost $15. Meadows was apparently impressed enough by the operation that he bought the set itself, shelling out $250,000 and entering into a ten-year, $1,000 per-year commercial lease with Creative Expeditions.

"Raising the Allosaur" was successful enough that it spurred Phillips to create the San Antonio Independent Christian Film Festival in 2004. Just before the festival opened, however, Phillips had to yank the film: It turned out that the skeleton had not in fact been discovered by Haley Meadows, but had been uncovered two years earlier by Dana Forbes, the landowner who eventually sold the site to Meadows. A paleontologist named Joe Taylor had identified the skeleton as an allosaur in May 2001, a year before Meadows' trip. When these facts were exhumed they mired Phillips' documentary in controversy.

This led to a bitter dispute over who owned the dinosaur. Before the conference, Phillips sent out a letter to attendees that said "a series of ethics-based issues have been brought to our attention," leading him to suspend sales of his film "pending a season for Creation Expeditions to appropriately address the aforementioned issues."

Creation Expeditions posted a note to its website claiming that its ministry had "endured an outrageous attack."

"This doesn't surprise us, as we know the wiles of the evil one is to try to thwart the Kingdom advance," the post said.

The allosaur eventually found its way to the Creation Museum in Petersburg, Kentucky, which is owned by Answers in Genesis. That group received the skeleton as a donation in May 2014 from a charity group that had bought the fossil from Taylor, the paleontologist.

"It was a bad deal that we had to accept," Taylor told the New Yorker, who said the dispute mediation with Creation Expeditions would have left him nearly $100,000 in debt and destroyed his business. He sold the fossils for about $125,000 to a Christian foundation, which eventually donated them to the museum. At that time the estimated market value of the allosaur was about $450,000.

It's unclear if any additional dinosaur fossils were ever found on Meadows' land. In 2016, he sold the property to Answers in Genesis for $197,000, taking a deed of trust for $192,000, which had a 4.5% interest rate and monthly installments of about $11,000. That deed was released in 2018, and Meadows presumably would have collected the $11,000 payments for the following 18 months, which he never reported.

In December 2019, Meadows announced he would not seek re-election to Congress. In fact, he resigned before the end of his term after President Trump appointed him chief of staff in March. And while Lin Wood's tweet was cryptic, it would appear that Meadows long ago escaped the reach of House ethics investigators.