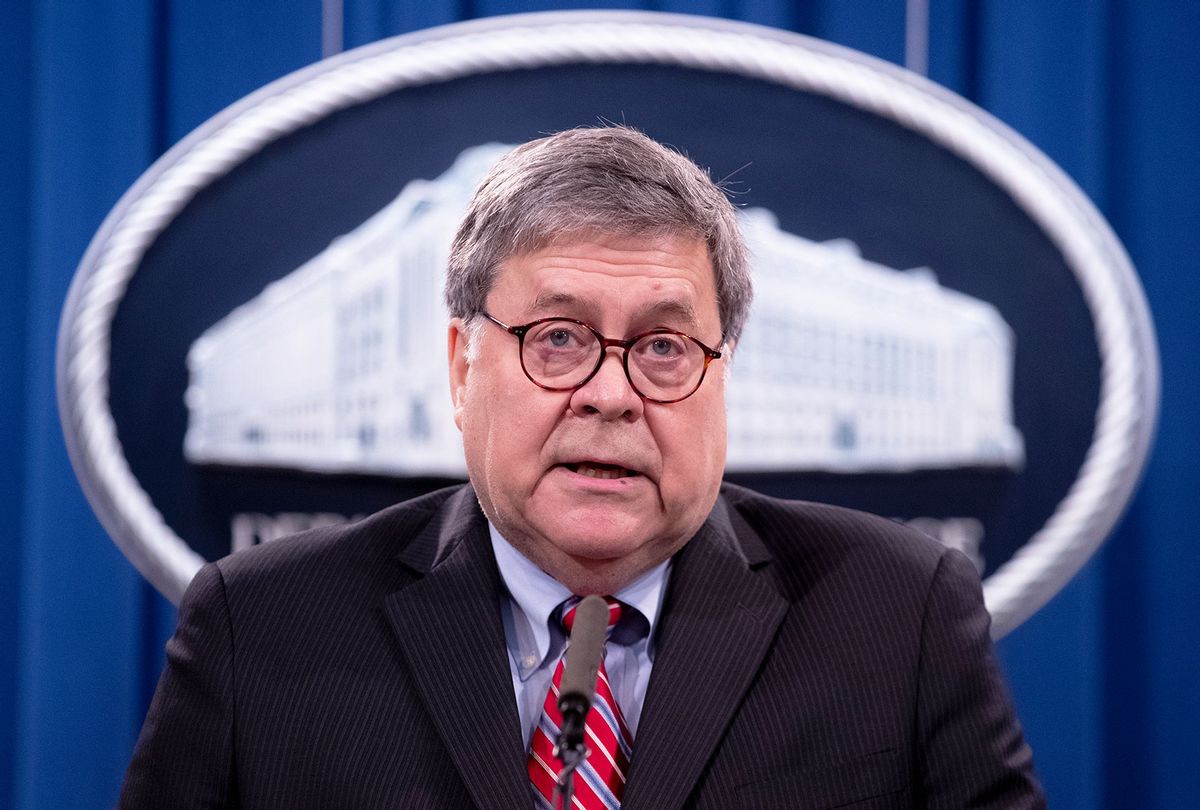 Outgoing Attorney General Bill Barr said on Monday that he would not appoint a special counsel to investigate Hunter Biden or President Trump's baseless voter fraud claims before leaving office later this week.

Barr, who announced he would step down before Christmas after refuting Trump's unfounded allegations of voter fraud, made the comments at a news conference two days before he is set to leave the Justice Department. Multiple news outlets have reported that President-elect Joe Biden's son Hunter, a frequent target of the president's attacks, has been under investigation by U.S. attorney's offices in Delaware and the Southern District of New York since at least 2018. Hunter Biden has said he learned of the investigation earlier this month, and has denied any wrongdoing.

The news prompted Trump to consider appointing a special counsel to investigate the younger Biden, according to the Associated Press.

"I think to the extent that there's an investigation, I think that it's being handled responsibly and professionally," Barr said of the probe on Monday. "To this point I have not seen a reason to appoint a special counsel and I have no plan to do so before I leave."

The comments came after Trump criticized Barr, who was reportedly aware of the investigation, for not disclosing the probe publicly before the election.

"Why didn't Bill Barr reveal the truth to the public, before the Election, about Hunter Biden. Joe was lying on the debate stage that nothing was wrong, or going on — Press confirmed" the president tweeted last week. "Big disadvantage for Republicans at the polls!"

Barr also broke with Trump on the recent cyberattack on federal agencies, telling reporters that it "certainly" appeared to have been carried out by the "Russians," echoing Secretary of State Mike Pompeo. Trump over the weekend disputed that the attack was from Russia and attempted to downplay its impact.

Trump has also complained that Barr publicly rejected the president's baseless voter fraud claims earlier this month. Barr said that while he is "sure" that there was some minor fraud during the election, the Justice Department has found no evidence of widespread fraud that might have changed the result.

"I'm sure there was fraud in this election, but I was commenting on the extent to which we had looked at suggestions or allegations of systemic or brace fraud that could affect the outcome of the election, and I already spoke to that, and I stand by that statement," Barr said. He added that there was "no basis" for the federal government to seize voting machines to examine them, as some Trump loyalists have urged.

The attorney general's comments came after The New York Times reported that Trump has considered naming attorney Sidney Powell, who has pushed a baseless and bizarre conspiracy theory alleging a foreign-backed plot by a voting machine company to flip votes from Trump to Biden, as a special counsel to investigate the unfounded voter fraud claims. Powell, who was ousted from Trump's legal team after claiming that Gov. Brian Kemp of Georgia, a Republican, was involved in the plot, reportedly brought her client Michael Flynn, the former national security adviser recently pardoned by Trump, to a White House meeting. Flynn has recently suggested that Trump could invoke martial law to "rerun" the election, although the president has no legal or constitutional authority to do such a thing.

Trump attorney Rudy Giuliani and other top advisers strongly pushed back on the idea of appointing Powell, according to the report, but Trump and Giuliani have discussed issuing an executive order to seize voting machines in various states.

Giuliani separately called Ken Cuccinelli, a top Trump appointee who was illegally installed as acting deputy secretary at the Department of Homeland Security, to ask DHS to seize the voting machines. Cuccinelli explained that the department did not have the authority to do so, according to the report.

"There's been one assertion that would be systemic fraud, and that would be the claim that machines were programmed essentially to skew the election results," he told The Associated Press. "And the DHS and DOJ have looked into that, and so far, we haven't seen anything to substantiate that."

Though Barr pushed back against using special counsels to investigate Biden or voting irregularities, he announced last month that he had appointed U.S. Attorney John Durham as a special counsel in order to continue his investigation into the origins of the Trump-Russia investigation.

Trump announced that Barr would be replaced by Deputy Attorney General Jeffrey Rosen, who did not participate in the news conference on Monday and declined to answer questions from Reuters about whether he would appoint a special counsel to investigate Biden or election fraud. Rosen has also declined to say whether he agrees with Barr's assessment that there was no widespread fraud.

Rosen said at his 2019 confirmation hearing that he would push back against any improper pressure from the White House, arguing that criminal investigations should "proceed on the facts and the law" and be "free of improper political influences."

"If the appropriate answer is to say no to somebody," he said, "then I will say no."