Income inequality is out of control. Economists fear Biden won't do enough to fix it

Based on his appointments, economists fear Biden may merely re-arrange the deck chairs on the Titanic 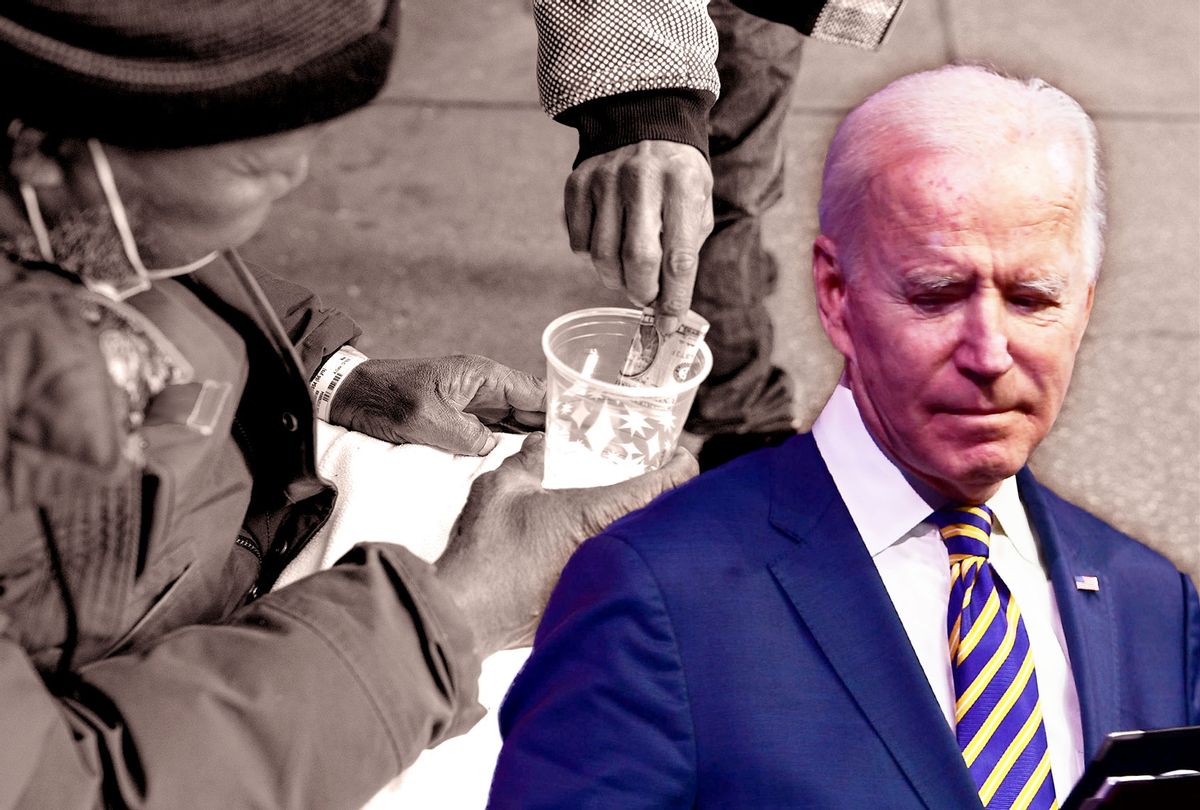 The coronavirus pandemic has not only taken over 340,000 lives in the United States, but led to a major economic downturn, the recovery from the which has primarily benefited the wealthy. The widening rift between rich and poor, stoked by Trump's policies, has stirred social unrest in the United States and created an opening for the next president to win political points by redistributing wealth in this country.

But will President-elect Joe Biden be that kind of president?

Many economists and political pundits are doubtful. And while it is difficult to predict entirely what a sitting president will do prior to their inauguration, there are hints in Biden's appointments and statements thus far that may foreshadow his economic agenda.

First, Biden's past positions speak to his political alignment. Though a Democrat, Biden has held pretty conservative positions in the past. As a senator he supported freezing Social Security spending, deregulating Wall Street, reducing the top income tax rate from 70 percent to 50 percent and opposing antitrust legislation. During the 2020 campaign, Biden ran by embracing President Barack Obama's legacy as his own — and emphasizing that this made him more moderate than opponents like Sen. Bernie Sanders of Vermont, a democratic socialist and his chief rival in the primaries.

Yet the events of 2020 seem to have pushed Biden to the left. After the COVID-19 pandemic caused an economic crash, Biden reportedly told his advisers that he wanted to plan a presidency as bold as that of Franklin Roosevelt, who is widely regarded as the most influential left-winger to ever hold that office. When he began announcing picks to his team of economic advisers — Janet Yellen as Treasury Secretary, Jared Bernstein as Chief Economist and Economic Policy Adviser, Cecilia Rouse as head of Council of Economic Advisers (CEA), Heather Boushey as a CEA member — some prominent Democrats publicly praised him on Twitter.

So which Biden should progressives expect — the Biden who pushed for centrism as a senator for 36 years and as vice president for eight, or the one who now seems to want progressives to believe he is in their corner?

"He's a transactional politician," Dean Baker, economist and co-founder of the progressive think tank the Center for Economic Policy Research, told Salon. "That's what he's been his whole life. So he's not Bernie Sanders who has strong convictions that I'm going to do X, Y, and Z. I think he's basically a decent guy, but he's going to go where the pressure takes him. And in that sense, I think that's not bad because there will be pressure from the left."

At the same time, Biden's choices for economic advisers are not necessarily groundbreaking, and that means progressive activists will have their work cut out for them.

"We need to consider what we mean by economic team — like [former South Bend Mayor and Secretary of Transportation nominee Pete] Buttigieg — providing a great 'return on investment' for Silicon Valley in ensuring that US government transportation policy is more based around accelerating profits of Big Tech firms and their investors rather than providing the public with adequate systems," Sam Husseini, communications director for the Institute for Public Accuracy, a progressive nonprofit group that challenges mainstream media narratives on major public issues, told Salon by email. He also expressed concerns about the fact that Biden's pick for Agriculture Secretary, Tom Vilsack, has ties to agricultural behemoth Monsanto and that Tanden has numerous Wall Street and other corporate connections.

Richard Wolff, professor emeritus of economics at the University of Massachusetts Amherst, expressed to Salon that  Biden's advisers are "out of the left end of the conventional. It remains very much within conventional. It is a kind of acceptance of the boundaries of what can be spoken in those circles."

To illustrate his point, Wolff explained that past Democratic economic advisers might "get lost in games about whether the cutoff for poverty is $18,000 or $20,000 for a family of four" or use other methods to do "whatever the moving the goalposts might have to be." The underlying problem is that, instead of thinking of solutions that redistribute economic power in a substantive way, "what they have consistently done under the label of realism is rule out the kinds of policies that come from radicals."

"Most of his advisors are really very moderate Democrats, very moderate policymakers," Gar Alperovitz, an American historian and political economist, explained to Salon. "We're not likely to see anything particularly interesting beyond very cautious and Obama-style economics."

When it came to names like Rouse, Bernstein and Tanden, Alperovitz characterized them as "a pretty standard, moderate, slightly left" group, the kind of "cautious" people who are somewhat sympathetic to the working class but would hardly be expected to shake up the fundamental structures of American capitalism itself through major redistributions of wealth and power.

As Wolff pointed out, the Democratic president whom Biden has specifically said he wishes to emulate, Franklin Roosevelt, famously proposed an economic bill of rights that would have guaranteed every American a "useful and remunerative job," housing, food, clothing, recreation, education and health care. Wolff said that based on his picks, it is doubtful that the Biden administration is going to pursue any truly sweeping changes like that, instead preferring the moderate approach of "the 8 million things that have been done puttering around at the edges of capitalism."

While Baker shared this broad consensus that Biden is going to take a more moderate approach — "he made no bones about that" — he said there was also reason for some hopefulness when it comes to issues like housing and urban development, where Biden has chosen the progressive Rep. Marcia Fudge of Ohio as his point person, and on issues like labor rights, telling Salon that "he's been very pro union really throughout his career and throughout the campaign. And there's a lot he could try to do in the White House and, I expect, with the National Labor Relations Board." Traditionally unions have been very effective at reducing income inequality, with the wealth gap between the top and bottom brackets widening in eras with weaker unions and shrinking in eras with stronger ones.

Another contributor to income inequality — and, in particular, the black-white wealth gap — is the trillions that Americans owe in student debt. There have already been reports that Biden is thinking about taking bold steps to deal with the student debt crisis. He has suggested, among other things, forgiving undergraduate tuition-related federal student debt from two- and four-year institutions for individuals who earn less than $125,000, canceling a minimum of $10,000 of student debt per person and making it so that after two decades, the federal student loans individuals may have left over will be forgiven without any tax burden.

Will this be enough? Nomi Prins, economist and author of "Collusion: How Central Bankers Rigged the World," talked to Salon about this issue.

"One of the things that Biden did during his campaign was give a little bit more positivity towards the notion of potentially canceling more of student debt in terms of just verbiage," Prins told Salon. "That was useful for the campaign. It was useful for getting the younger voters in, Salon readers, and just generally people who've been carrying a year to two years to a decade to two decades worth of student debt."

Prins' concern is that the programs Biden will actually choose to implement may not be sufficiently comprehensive.

"At the average student loan rate — let's call it, 4%, 5%, 6%, 7% — the amount of interest that someone would have paid already after 20 years, it would have gone to the banks most likely because the higher interest go with private funded student loans would have ultimately either potentially overshadowed the student debt to begin with, or certainly been a large chunk of it," Prins explained "And so it's useful to cancel the rest of it, but as the gift on student loan debt, that doesn't do it — that does not cut into the $1.5 trillion or $1.6 trillion in growing student loan debt that continues to accumulate."

Overall, the question of whether Biden will be sufficiently left-wing depends on more than the character of Biden himself. It depends on the specific pressures exerted upon him by the political conditions of his time. To understand this, it is useful to compare Biden to the president that he has often compared himself to — Roosevelt.

"It's helpful to think in terms of the era as much or more than about the individual," Norman Solomon, a Sanders delegate in 2016 and 2020 and a national director of rootsaction.org, told Salon. Although "Roosevelt ran as something of a deficit hawk in 1932," outside progressive groups exerted pressure on him that allowed him to push the party to the left. (Wolff made a similar point to Salon.) "That's why Roots Action has been organizing the 'No Honeymoon for Biden' campaign. And there are a lot of progressive forces, I believe, arrayed to insist that there be no honeymoon with Biden, so that the mistakes of greeting [President Bill] Clinton and Obama by kissing their boots instead of pushing them will not be replicated."

Will Biden be receptive to that? Baker shared a revealing Biden story with Salon, back when the then–vice president met him in a group setting.

"He met with a group of economists, there were probably about eight of us, and he just was picking our brain on different issues," Baker recalled. "And I was impressed with him, I gotta say, because he actually wanted to hear the issues. He had some of us debating back and forth on different issues and he seemed to be following. I've had many occasions to deal with different politicians and usually they're looking for a soundbite." By contrast Biden "actually seemed interested in hearing a serious discussion. So that impressed me."