Assuming the republic withstands this assault, Trump may have done us a favor — by demolishing the Republican Party 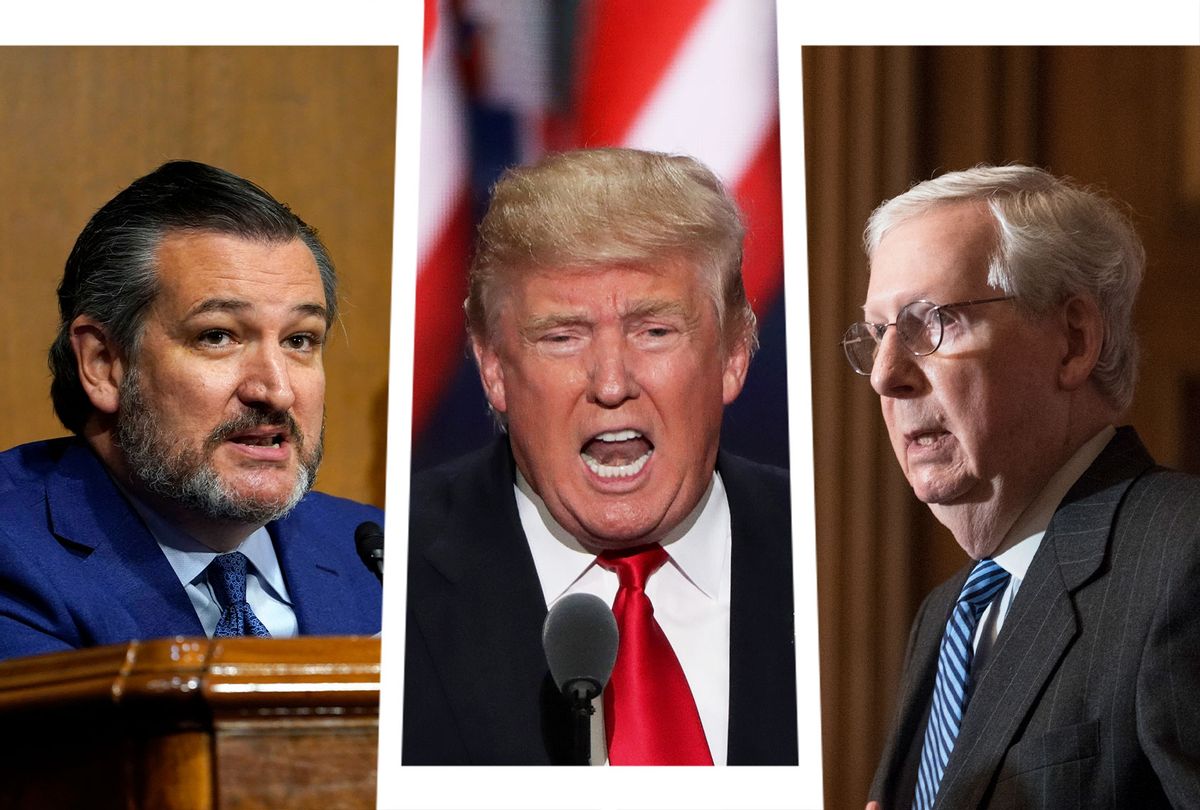 Despite the existential threat to American democracy Donald Trump is manifesting, there's part of me that's cheering for him to keep on doing what he's doing. I'll explain momentarily. Meantime, yes, he's committing treason by exploiting the office of the presidency to forcibly overturn the certified results of the 2020 election. If he were successful, it would signify the end of our system of government. Sure, he's much more likely to fail, but it doesn't necessarily mitigate the damage he's wreaking, especially to his own party.

Since the November election, Trump has not only been stress-testing our electoral system but also our judicial system and especially various state governments — not unlike the velociraptors in "Jurassic Park" testing the electrified fences as a means of escape. While he's been hilariously unsuccessful, he's essentially leaving a trail of breadcrumbs for the next Trump (who could literally be another Trump) to follow in his tiny footsteps.

It appears as if the system has held, this time around, yet party operatives are fully aware by now which Republican officials to replace (watch your backs, Brian Kemp and Brad Raffensperger) and which posts are most vulnerable to authoritarian extortion. Next time, it could be much easier for Trump copycats with tyrannical aspirations to seize power, thanks to the trail he's blazing for them as we speak.

In addition to the various Trumps who are lining up to run for office — namely Lara and Ivanka, at least — we're now fully cognizant of which members of Congress have officially and perhaps permanently signed on to Trump's fascist idiocracy bandwagon. Around 140 members of the House of Representatives and a dozen or so members of the U.S. Senate plan to object to the congressional certification of the electoral college results this week, indelibly carving their names on the bathroom walls of history. These members, including Josh Hawley, Ted Cruz, Ron Johnson, Marsha Blackburn and dozens of other Red Hats, are the charter members in the new breakaway Trump Party.

This brings us back to my aforementioned cheering. Provided their efforts are unsuccessful and provided we sidestep irreparable damage in the long run, the events of the past two months, if not the past four years, may permanently cleave the Republican Party into two factions, with Donald Trump holding the chainsaw.

The split began in 2016, with the NeverTrumpers and a few elected Republicans pledging to oppose Trump, but it's been greatly accelerated in the past year and turbo-boosted since the 2020 election.

We've all observed how Trump's screechy blurts and whiny laments have become dogma for the Red Hat movement. Whatever he says is perceived as golden in the small minds of his sucker disciples. They question nothing and believe everything belched by this professional con man, including his unsubstantiated insistence that the election was stolen from him. Any Republican who disagrees is immediately targeted as an enemy of the MAGA cult. These enemies are subsequently threatened, extorted or directly accosted by the various Red Hat militias, with marching orders amplified by the Trump entertainment complex on the internet, radio and cable news.

That's exactly what cowardly Republicans like Ted Cruz and Mitch McConnell fear the most. More than anything, they fear the wrath of the Red Hat Army and its ugly-crying generalissimo. That's mainly why they've decided to enable such an obvious and proven con artist and his cockamamie strategy for remaining in power. If they oppose Trump, they're asking to be screwed with their pants on and they know it. They certainly don't want to be primary-challenged in 2022, and anyone running for president in '24 will need the Red Hats on their side. The fear of being targeted for ouster is further compounded by fundraising problems and threats from cosplay-terrorists like the Proud Boys and the Boogaloo Bois. So out of pure fear and political expedience, the sedition caucus has decided to genuflect before the small-man from Mar-a-Lago and his mob family of Fifth Avenue Clampetts.

Meanwhile, Trump's attacks against members of his own party, most recently including elected Republicans from Georgia, are going a long way toward alienating those people from the MAGA ranks. More crucially, Trump's attacks are collectively creating a de facto enemies list. Through this process of testing democracy for weaknesses, Trump is systematically choosing who's pure enough for the Trump Party and who's standing in the way of his self-serving tyranny. In other words, even if someone like Brian Kemp wants to be part of Team Trump, he probably won't be welcome. Not any more. "Join or die" would make for an appropriate slogan. "Don't betray Dear Leader" would be a better one.

Bizarrely, this process is less about Republicans leaving the party than about Trump expelling Republicans from it.

The lure of Trump's emerging party, much like the Dark Side of the Force, is easier and more seductive from a political standpoint. But again, this won't attract everyone — it won't be every single Republican. It'll be a whole lot of them, though, and the group will only get larger as the online reach of pro-Trump conspiracy theorists and OAN fanfic grows exponentially larger, collecting new Trump Party members as it snowballs, while leaving turncoat anti-Trump Republicans in its wake. Once the teams are decided, the party that once occupied half of the political debate in this country will see its power greatly undermined by Trump's shenanigans.

It's difficult to forecast how exactly the two factions will be subdivided — that is, which faction will end up with the larger piece of the toxic pie — but it sure looks as though the Trump Party side will end up by far the most powerful and most populated, given that there are only a handful of remaining Republicans who oppose Trump: Mitt Romney, Ben Sasse, Adam Kinzinger and maybe Liz Cheney. There might be additional elected officials who lash themselves to the wheel of the old Republican Party, but it looks at least right now as if it's being stripped for parts by a Trump-led movement of weirdos, racists, conspiracy theorists and nihilists.

It's possible some of the anti-Trump Republicans will finally join the Biden coalition alongside the NeverTrumpers. It's also possible they'll continue to stand by the remnants of the old Republican Party, though greatly reduced in numbers and influence. It all depends on where this major party realignment ends up, but it looks as though the Red Hat side will be the larger of the two remaining halves. Conceivably the Trump Party will end up with third-party status, though I doubt it.

Irrespective of how all this breaks down, political opposition to the Biden coalition will be more or less powerless nationally, thanks to Trump's burning of the village: It will only be capable of achieving victories in heavily MAGA regions and ridiculously gerrymandered districts. Everywhere else, the conservative half of the American political debate could end up with permanent minority status. That would be the best-case scenario for the nation. This is the genuine upside to Trump's massively destructive antics.

Either way, whether or not the GOP is really imploding, we've entered a new and harrowing phase in American political history. Debating policy in good faith has become an archaic relic of a more civil past. Now the stakes have come to this: Either the Biden coalition of mostly Democrats continues to increase both its voter registration and turnout numbers, thereby dominating elections, or the Trump faction will continue to infiltrate government at every level. As I've written before, American politics is no longer about left versus right. It's now a cold civil war between the forces of truth and the forces of fiction: an adult side of the ledger — an American side that still believes in reality, democracy and political sanity — and a side entirely poisoned by Trumpian fascism and fantasy. Should the Trump side be allowed to expand its power, it's game over for the republic. But if Trump's endgame is the total destruction of the Republican Party, which is how it looks today, it's possible that American democracy could actually benefit from his shotgun assault.