Soon-to-be-ex-senator says DOJ and Senate cleared her, but her husband won't say what became of SEC trading probe 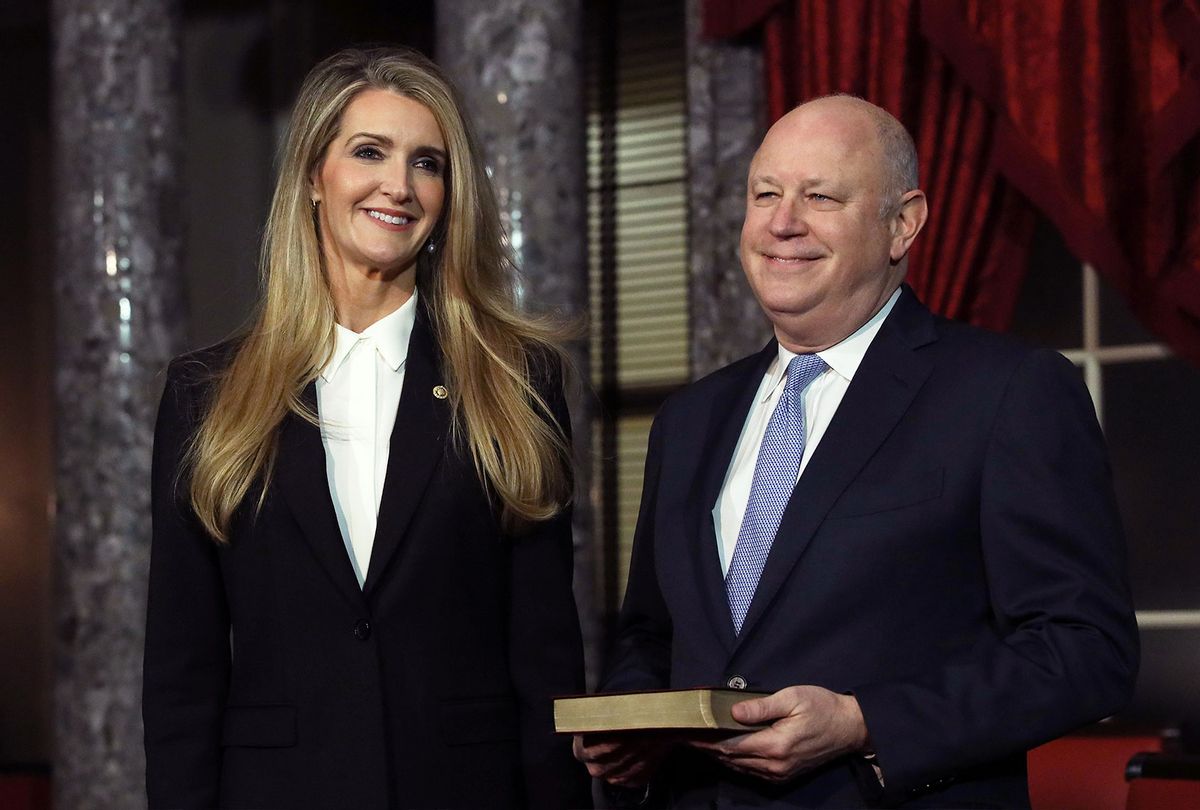 U.S. Sen. Kelly Loeffler (R-GA) and her husband Jeff Sprecher wait for the beginning of a ceremonial swearing-in at the Old Senate Chamber of the U.S. Capitol January 6, 2020 in Washington, DC. Sen. Loeffler was appointed to the seat to succeed former Sen. Johnny Isakson (R-GA), who resigned for health reasons. (Alex Wong/Getty Images)
--

Sen. Kelly Loeffler, the unelected Georgia Republican who just lost a runoff election to the Rev. Raphael Warnock — but is back in Washington on Wednesday to support President Trump's efforts to overturn his own election defeat — drew scrutiny from government investigators last spring amid press reports of well-timed stock trades that she and her husband, Jeff Sprecher, chairman of the New York Stock Exchange, made ahead of the coronavirus pandemic. Two of the investigations were closed, but eight months later, Sprecher's company still won't say what came of the third.

At the time of the trades, Loeffler argued that she and Sprecher, the founder and CEO of Intercontinental Exchange (ICE), a global financial giant which bought the New York Stock Exchange in 2013, had complied with insider trading rules. The Republican-led Senate and the Department of Justice investigated, and both probes were eventually closed. Loeffler marked the occasion with a campaign ad called "Cleared," which claimed that the "fake news" had "lied" about her trades.

"The Senate Ethics Committee has come to the exact same conclusion as the U.S. Department of Justice: Senator Loeffler did absolutely nothing wrong and has been completely exonerated," a Loeffler spokesperson said following the Senate's move to dismiss in July.

But in May, Loeffler, along with other senators ensnared in the trading scandal, also handed documents over to the Securities and Exchange Commission (SEC), the federal agency that regulates stock trades, and it is still unclear what became of that probe.

A Loeffler spokeswoman said at the time that "Senator Loeffler has welcomed and responded to any questions from day one."

The campaign, however, has not answered Salon's questions about the SEC investigation, and the SEC would not comment on the existence of investigations. A senior Justice Department official not involved with the matter told Salon that in joint probes like this one, the SEC's enforcement arm typically makes decisions about civil citations or settlements independent from the DOJ.

A spokesperson for Sprecher's company, Josh King, has also refused to respond to multiple inquiries. Asked again this week what came of the probe, King referred Salon to the Loeffler campaign. When asked specifically what came of the investigation into Sprecher's trades, King declined to reply. He referred another follow-up question back to the campaign, and then declined again to answer when Salon pointed out that the question was not about Loeffler, but Sprecher.

"An SEC investigation can take one to two years to complete, so it would not be surprising, if the SEC opened an investigation, for it to be ongoing with no comment from the involved parties," Fagel said, adding that the SEC does not settle matters "quietly" — any enforcement action, whether a settlement or litigation, is announced publicly.

If the SEC decides to close an investigation without further action, Fagel said, it will send a closing letter to the relevant parties, which they are free to share with the public. King did not reply when asked whether Sprecher had received such a letter.

Fagel said that the agency can choose to proceed in a number of ways, such as by filing a civil case in federal court or through internal administrative action, with penalties ranging from fines to suspensions.

"Most SEC actions are settled before filing, with the settlement and the underlying action disclosed simultaneously by the SEC," he said. "In an insider trading case, remedies can include disgorgement of improper trading profits, penalties — typically one to two times the disgorgement amount — and possibly bars or suspensions from associating with a broker or adviser, or serving as an officer or director of a public company."

The SEC does offer executives of publicly held companies the option of trading through a pre-planned brokerage arrangement, called a 10b5-1 plan, allowing them to access cash while guarding against the appearance of insider trading. In March, ICE responded to reports about Loeffler and Sprecher's sales in a statement that said company policy included a 30-day waiting period. As chairman of the NYSE, Sprecher must also abide by its rules, which define a conflict of interest as "when an individual's private interest interferes in any way — or even appears to interfere — with the interests of the corporation as a whole."

But Salon's review of Loeffler and Sprecher's transaction history over the last several years indicates that they made significant changes to their plan for 2020, doubling in frequency and more than doubling the volume and value of sales of their ICE stock this year:

These changes appear to come after Loeffler was appointed to her Senate seat in December 2019 by Georgia Gov. Brian Kemp, and just weeks before she received an unusually structured $9 million severance package from her husband's company, where she had worked as CEO of a subsidiary that focused on cryptocurrency. Days after she was sworn in, Loeffler was named to the Senate subcommittee that oversees regulation of her husband's company, as well as the company she had just left.

"I have worked hard to comply with both the letter and the spirit of the Senate's ethics rules and will continue to do so every day," she said at the time.

Loeffler recused herself from that subcommittee in early May, after the trades became public and as she was submitting documents to investigators from the DOJ, SEC and Senate. She still sits on the parent Agriculture Committee, however, which retains oversight. (She also oversees her brother's soybean operation.)

It was possible, the attorney suggested, that the couple wanted to have cash on hand in anticipation of funding Loeffler's re-election bid. They poured at least $31 million into politics during the 2020 election cycle, $23 million of it to Loeffler's campaign, according to FEC filings, beginning with a $5 million loan in December 2019. However, Loeffler accessed the first $17 million of her self-funded campaign contributions through a line of credit from Morgan Stanley Private Bank, and did not transfer any funds from her personal account until September.

Earlier that month, ICE bought Ellie Mae, a software company that processes nearly half of all new residential mortgages in the U.S. The $11 billion purchase proved a boon for Sprecher: He became a billionaire at the end of his wife's first year in office, according to Bloomberg, after his company's stock rose more than 22%, boosting the couple's net worth from roughly $800 million since last summer.

Salon reported last week that a number of last-minute Loeffler donors are executives at major real estate and equity firms, some of whom did not disclose the names of their employers.

According to a transaction report filed with the SEC last week, on Dec. 28, Sprecher gave away 80,000 shares of ICE stock, valued at a little more than $9 million. That was by far the largest gift of stock Sprecher has ever reported. The recipient is unknown.