Meet Amanda Gorman, the powerful poet laureate who voiced our hope for a unified, better America 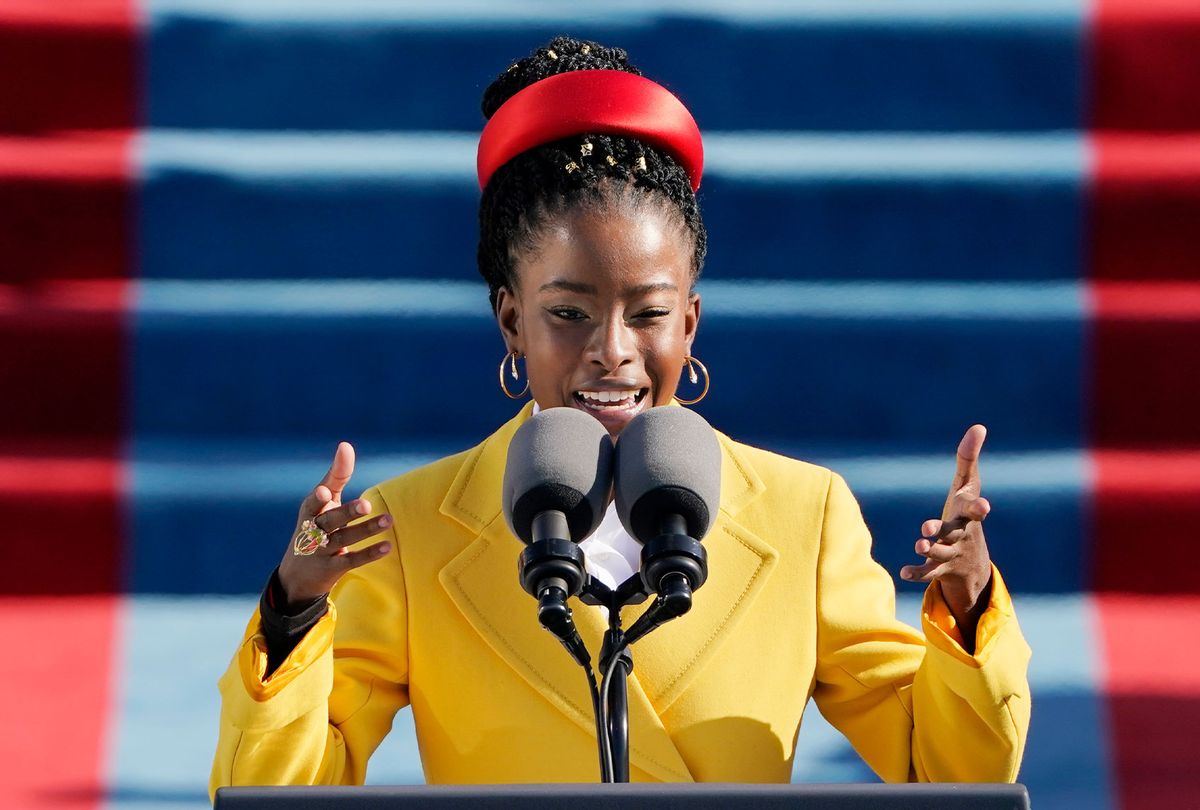 American poet Amanda Gorman reads a poem during the 59th Presidential Inauguration at the US Capitol in Washington DC on January 20, 2021. (PATRICK SEMANSKY/POOL/AFP via Getty Images)
--

When poet Amanda Gorman took center stage during President Joe Biden's inauguration to deliver her poem "The Hill We Climb," it became immediately clear why she was chosen to precede him on the podium.

Only four presidents —John F. Kennedy, Bill Clinton, Barack Obama, and now, Biden — have had poets read at their inaugurations and Gorman captivated viewers across America as she spoke of a shaded past and a lighter future, not shying away from four years of grief and trauma, but nevertheless determined to offer an outlook for America's redemption.

Her presence as a young Black woman artist on stage felt deeply historic, especially as deep political divisiveness and racist rhetoric from government leaders and law enforcement has continued to come into clearer view over the last four years. And everything about her reading — from the development of her work, to her chosen outfit, to the poem itself — is imbued with symbolism.

Here's everything you need to know about Gorman and her performance:

Who is Amanda Gorman?

Gorman is a 22-year-old poet from Los Angeles and is the youngest poet to ever perform on Inauguration Day. According to the New York Times, Gorman developed a love of poetry at a young age.

As Gorman told NPR's Steve Inskeep, she, like President Joe Biden, had a speech impediment as a child. She said that was one of the reasons that she was drawn to poetry. "Having an arena in which I could express my thoughts freely was just so liberating that I fell head over heels, you know, when I was barely a toddler," she said.

Gorman was encouraged to really pursue her craft by her middle school teacher mother, Joan Wicks, and became the first person to hold the position of National Youth Poet Laureate at 16. Later, she attended Harvard to study sociology.

How was Gorman chosen to perform at the inauguration?

According to Harper's Bazaar, several weeks before the inauguration, Dr. Jill Biden stumbled upon a video of Gorman reading her original poem "In This Place: An American Lyric" at the Library of Congress in 2017. A Zoom call was set up between Biden and Gorman, during which Gorman was invited to compose and read an original poem.

"They did not want to put up guardrails for me at all," Gorman told the New York Times. "The theme for the inauguration in its entirety is 'America United,' so when I heard that was their vision, that made it very easy for me to say, great, that's also what I wanted to write about in my poem, about America united, about a new chapter in our country."

Gorman described to several publications how she initially struggled with the enormity of the project ahead of her. She told the Los Angeles Times that she listened to music that helped put her "in a historic and epic mind-set," including soundtracks from "The Crown," "Lincoln," "Darkest Hour" and "Hamilton."

What enabled her to fully complete the poem, however, was observing the insurrection attempt at the Capitol on Jan. 6.

"I wasn't trying to write something in which those events were painted as an irregularity or different from an America that I know," Gorman said. "America is messy. It's still in its early development of all that we can become. And I have to recognize that in the poem

With this in mind, she wrote the lines: "We've seen a force that would shatter our nation rather than share it / Would destroy our country if it meant delaying democracy / And this effort very nearly succeeded / But while democracy can be periodically delayed / It can never be permanently defeated."

What poem did Gorman read and what did it mean?

Gorman recited her original poem "The Hill We Climb," a poignant, self-aware piece that speaks boldly to the deep divides in this country, led by people who would rather topple democracy than accept defeat. And yet, she acknowledges how powerful it is that we are in "a country and a time where a skinny black girl descended from slaves and raised by a single mother can dream of becoming president, only to find herself reciting for one."

While "The Hill We Climb" describes the brokenness and hopelessness many in this country may feel following Trump's incitement of violence, the poem encourages listeners with the knowledge that they can "step out of the shade." Gorman told NPR that she dug into the works of orators like Martin Luther King, Jr., Frederick Douglass, Abraham Lincoln and Winston Churchill, who all were tasked with calling for hope and unity in times of division.

One particular line that seemed to stand out to viewers was, "Scripture tells us to envision that everyone shall sit under their own vine and fig tree and no one shall make them afraid. If we're to live up to her own time, then victory won't lie in the blade, but in all the bridges we've made."

"Under their own vine and fig tree" is a phrase found in multiple places throughout the Hebrew Scriptures and is used to describe the simple life of a farmer who was independent of military oppression. It was later used by George Washington nearly 50 times in various correspondence, as a reference to the American Revolution. Then, in a 1787 issue of the New York Journal it was used by a writer to describe America as a place for oppressed immigrants to find independence.

You may also recognize the line from the "Hamilton" song "One Last Time," where it's contextualized as, "Everyone shall sit under their own vine and fig tree/And no one shall make them afraid/They'll be safe in the nation we've made."

Gorman's inclusion of that phrase speaks to America's founding as a place that had the potential to be free of oppression, and the ongoing dream that it could be true for all Americans, regardless of race or cultural background.

How did people respond to "The Hill We Climb"?

Gorman's recitation was met with rhapsodic praise from celebrities, artists, and political organizations alike, who took to Twitter to express their own thoughts on her sober, yet hopeful outlook.

"I have never been prouder to see another young woman rise! Brava Brava, @TheAmandaGorman!" said celebrity entrepreneur Oprah Winfrey, "Maya Angelou is cheering — and so am I."

Gorman also got nods from people in the news media, with CBS National Correspondent David Begnaud saying, "Watch Amanda Gorman. It's a treat." Seth Abramason, a popular columnist from Newsweek, also boosted Gorman's poem on Twitter, urging others to do so.

Pulitzer-Prize-winning poet Jericho Brown posted on Twitter, "Oh this is just lovely. Flow like water," later quoting one of Gorman's most poignant lines on Twitter: "If only we're brave enough to see it, if only we're brave enough to be it." American legal scholar Lawrence Tribe also applauded the youth poet: "Amanda Gorman's inspiring inaugural poem perfectly captured the challenge of the moment — and our hopes for the future.

Meanwhile, many Democratic politicians joined the chorus. Senator Cory Booker, expressed on Twitter, "Thank you, Amanda Gorman, for sharing such powerful and inspiring words today." Congresswoman Stacey Abrams said, "Amanda Gorman's message serves as an inspiration to us all." Former First Lady Michelle Obama also added, "With her strong and poignant words, @TheAmandaGorman reminds us of the power we each hold in upholding our democracy. Keep shining, Amanda! I can't wait to see what you do next."

Even Republican political action committee The Lincoln Project chimed in, "Amanda Gorman's poem on unity is one for the history books."

Dazzling as it was, however, reception to Gorman's poem was not without criticism. Editor-in-chief of The Dispatch Jonah Goldberg went against the grain, and admitted, "Not loving this poem."

What's the story behind Gorman's outfit?

Gorman accessorized with subtle symbolism in mind. She wore a ring bearing the emblem of a caged bird, a tribute to poet Maya Angelou, the author of "I Know Why the Caged Bird Sings," who performed at the 1993 presidential inauguration of Bill Clinton.

That ring was a gift from Oprah Winfrey. As Gayle King reported on CBS News on Wednesday morning, Oprah had actually gifted Angelou with the coat she wore that day and wanted to continue the tradition, but Gorman had already purchased the yellow coat seen on Biden's Inauguration Day, so Oprah gave her the earrings she is wearing, as well as the ring, as a nod to Angelou.