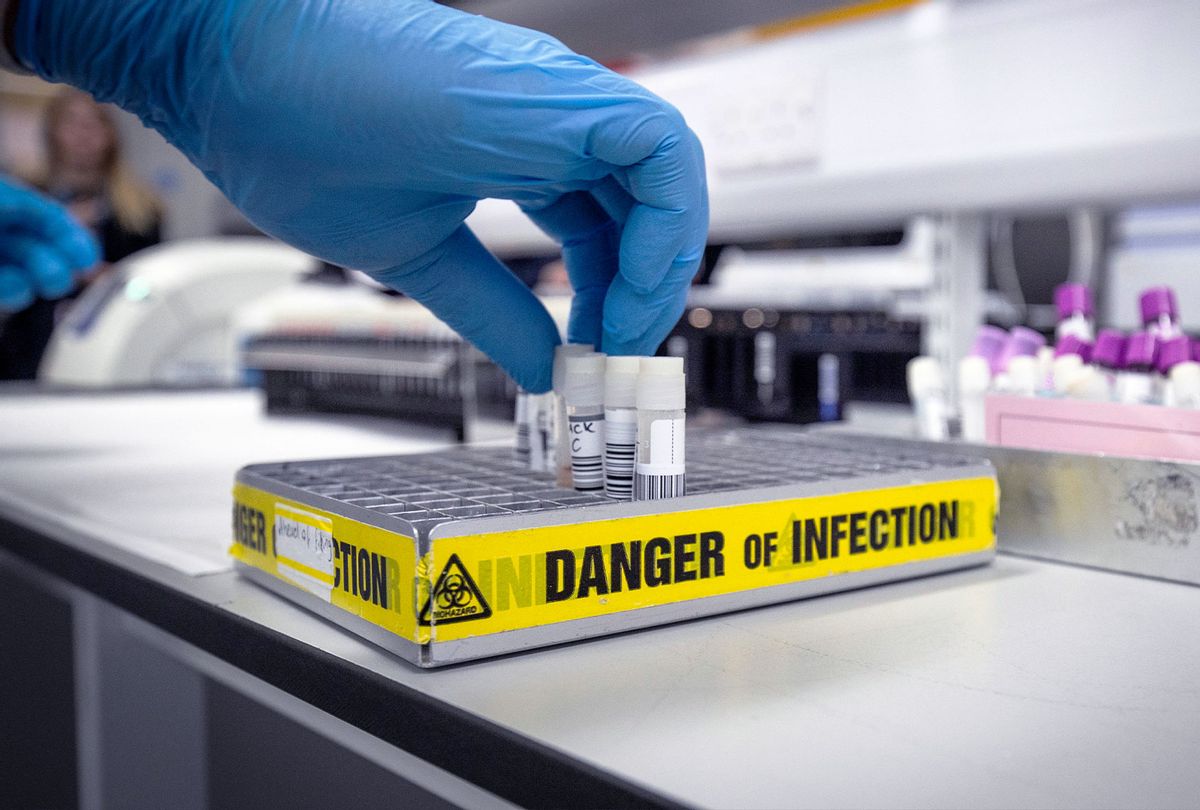 Clinical support technician Douglas Condie extracts viruses from swab samples so that the genetic structure of a virus can be analysed and identified in the coronavirus testing laboratory at Glasgow Royal Infirmary, on February 19, 2020 in Glasgow, Scotland. (Jane Barlow - WPA Pool/Getty Images)
--

As increasingly deadly and infectious strains of the novel coronavirus appear all over the world, National Institute of Allergy and Infectious Diseases Director Dr. Anthony Fauci told reporters on Monday that Americans cannot afford to get "complacent."

"We don't want to get complacent and think ... 'Oh, things are going in the right direction, we can pull back a bit, because we do have circulating in the country a variant from the U.K. that's in over 20 states right now," Fauci told NBC's "Today" show on Monday. President Joe Biden's chief medical adviser was referring to the fact that there has been a recent drop in COVID-19 diagnoses and hospitalizations, although Fauci believes this is a natural plateauing rather than the result of the Moderna and Pfizer/BioNTech vaccines. Fauci's comment also acknowledged that several new strains of SARS-CoV-2 have emerged, each of which has raised concerns about our ability to combat the deadly disease.

When it comes to the British strain of COVID-19, Prime Minister Boris Johnson told reporters last week that the new variant (known as B.1.1.7) appears to be not only more transmissible, but could also be "associated with a higher degree of mortality." The government's chief scientific adviser, Sir Patrick Vallance, emphasized that this concern is based on mathematicians comparing the death rates of people infected with B.1.1.7 compared with older versions of the virus and as such "there's a lot of uncertainty around these numbers and we need more work to get a precise handle on it." He added that he is "concerned" about the increase in mortality and transmissibility.

Another one of those strains originated in South Africa, prompting Biden to ban United States travel to that country (as well as to the United Kingdom and Brazil, which has also seen new strains). The South African variant, known as 501Y.V2, was recently found to be able to ward off antibodies from individuals who had recently recovered from COVID-19, meaning that it has the potential to reinfect people with the disease multiple times. 501Y.V2 also includes mutations in a protein known as Spike, which causes the little pins that stick out from around the sphere of the virus like the spines on a sea urchin. Because both the Moderna and Pfizer/BioNTech vaccines work by training the body's cells to recognize the Spike protein and fight it, this means that the South African variant could evade the mRNA vaccines, or at least reduce their efficacy.

The British and South African strains may have dominated the headlines, but they are not the only strains raising alarm among experts. A Brazilian strain known as P.1 has infected 76 percent of the Brazilian city of Manaus, according to a recent study in the journal Science, which should have put the residents of that city at the level of herd immunity. The fact that it has not done so has raised concerns that the disease is able to evade the human immune system, although this has not yet been proved. Earlier this week public health officials in Minnesota announced that an individual in that state had been infected with the Brazilian variant.

In addition to these three strains, there are also reports that a possible new strain of the novel coronavirus has been discovered in California. The mutated variant, which has been labelled CAL.20C, may account for at least 36 percent of the COVID-19 cases in the Los Angeles area and 24 percent in southern California as of December 2020, according to a paper published by researchers at Cedars-Sinai Hospital that has yet to be peer reviewed. As the researchers wrote, "The predominance of this strain coincides with the increased positivity rate seen in this region." This means that the new strain could be responsible for the growing number of COVID-19 cases in that area of California.

Researchers are working hard to protect people from the new variants and check whether existing vaccines will protect against new mutations. Although Moderna and Pfizer/BioNTech both said that their vaccines are protective against the British and South African strains, they are slightly less confident about the South African one, prompting Moderna to begin development on a booster shot that could help against that mutant form of the virus. Fauci says that he still believes that the two vaccines have "enough cushion" to still be effective against the UK and the South Africa strain. Yet he cautioned that public health authorities needed to keep an eye on those strains, and be ready to upgrade the vaccines "if it's necessary." Fauci has also urged Americans to begin double-masking in order to more effectively stop the spread of COVID-19.