Media tries to "both sides" an insurrection: No, anger over the Capitol riot isn't "partisan rancor" 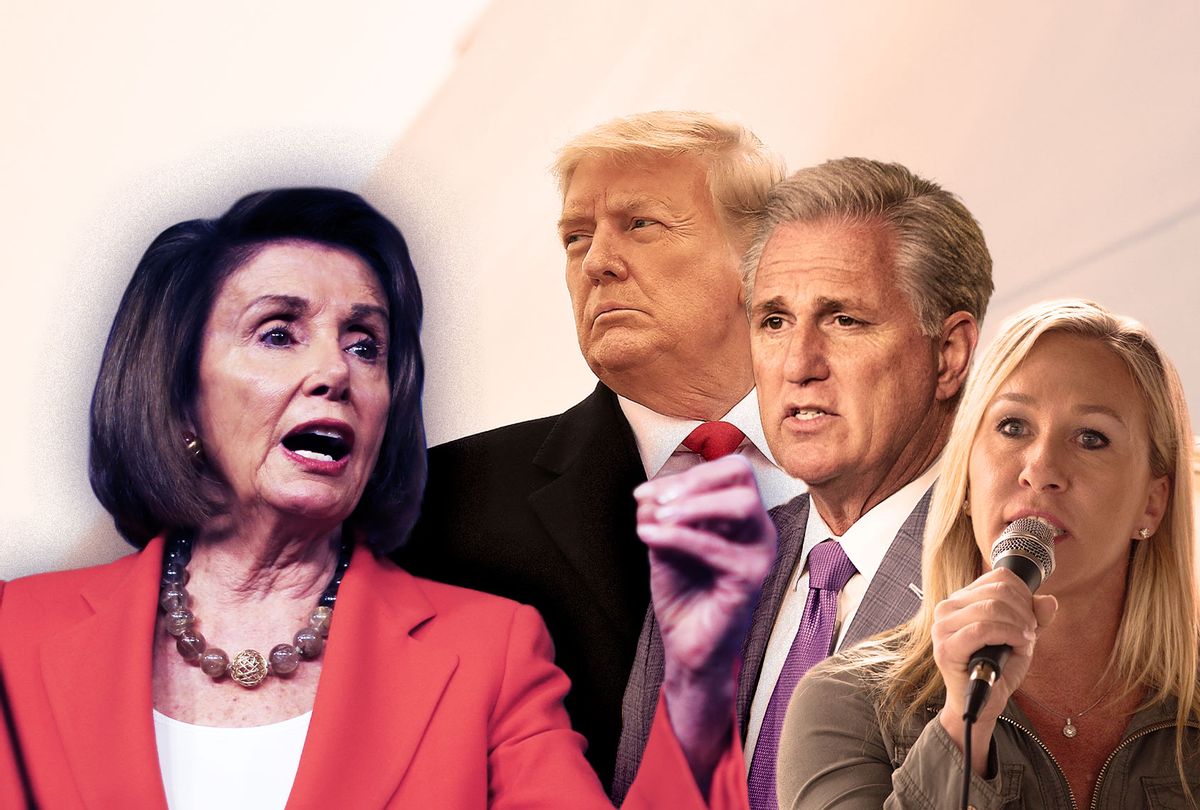 The endless mainstream media urge to cast any and every partisan conflict in "both sides do it" terms — no matter how one-sided any conflict actually is — hit a shocking new low on Friday morning when the Washington Post ran this front-page headline: "Congress hits new levels of partisan rancor."

The Post's appalling headline really underscores the mainstream media's slavish dedication to false equivalence. It minimizes the growing Republican support for the violent insurrection of January 6 and the continued Democratic anger over those events as merely a partisan spat. Readers who clicked the story saw more of the casual equation between the intended victims of the mob Donald Trump sent to the Capitol and Trump's supporters with the internal headline: "Hostility between congressional Republicans and Democrats reaches new lows amid growing fears of violence." The headline manages to insinuate that both parties are rolling out the welcome mat for violence — when truly, it's only the Republicans.

The story itself, written by Colby Itkowitz and Mike DeBonis, largely avoids the both-siderism of the headlines. The opening paragraph does describe "House Speaker Nancy Pelosi leveling an extraordinary allegation that dangers lurk among the membership itself," but Itkowitz and DeBonis swiftly demonstrate that Pelosi's concerns are justified.

"The enemy is within the House of Representatives, a threat that members are concerned about, in addition to what is happening outside," Pelosi warned Thursday morning.

She is right, and not just because of a few boldly conspiratorial Republican congressional members — like Rep. Marjorie Taylor Greene of Georgia and Rep. Lauren Boebert of Colorado, who have fantasized about killing Democrats and who demanded the right to display weapons around colleagues whose lives were imperiled by violent Trump supporters, respectively. She's right, as Itkowitz and DeBonis show, because House Minority Leader Kevin McCarthy, R-Calif., is embracing the insurrectionist wing of the GOP, and proudly working with Trump, who was impeached for inciting the mob.

That is the real story here: Instead of shunning Trump and his fellow travelers for stoking an insurrection, congressional Republican leadership is supporting and encouraging the very people who are most responsible for the attempted overthrow of the government.

McCarthy, in particular, as the article makes clear, has been kowtowing to the extremist element, giving Taylor Greene plum committee assignments and making a big show out of meeting with Trump at his home in Palm Beach, Florida. The message being sent by McCarthy isn't subtle: Insurrections are alright with him. He may have made milquetoast condemnations of the violence, which led to five deaths in real-time and is tied to two suicides of Capitol police after the fact. Still, that's irrelevant in the face of what McCarthy is communicating with his open embrace of Trump, who both instigated the insurrection and refused to listen when McCarthy personally begged Trump to call the riot off.

And yet, the Washington Post headline misleadingly attributes the situation to "partisan rancor," even as the story shows that the problem is 100% with the Republicans accepting and encouraging violence.

For an article that's really about how bad of a leader Kevin McCarthy is and how his actions fomented both the insurrection and the tension between members right now, this headline is......... a choice, @washingtonpost pic.twitter.com/6WBfXWYYq9

Why so much fuss over a headline? Well, part of the problem is that a lot of readers don't read much further than headlines, as anyone who has seen folks react to articles shared on social media can attest. Instead, readers often just glance over headlines, hoping to get the gist of the news without spending much time actually reading it. Those readers are being misled into believing that the situation is of two equivalently unreasonable sides, when in fact it's a story of Republicans becoming increasingly fascistic and Democrats reacting entirely reasonably.

The Washington Post's "both sides" coverage only continues with an even grimmer second article, by Paul Kane, that irresponsibly frames the violent insurrection and subsequent impeachment as a "horse race" story. This time, the fault isn't with the headline writers, but with Kane himself.

"The Senate is hurtling toward an impeachment trial that will accomplish almost nothing by design and likely leave everyone with a bitter aftertaste," Kane writes, complaining that it will not satisfy Democratic voters, who "will be furious that GOP senators refused to hold former president Donald Trump accountable," or Republican voters, who mostly agree with the insurrection and "will be upset that congressional Democrats went through with an impeachment trial."

"And independent voters, more focused on the health and economic crises fueled by the coronavirus pandemic, will wonder why Congress prioritized an impeachment process at all," Kane asserts.

This analysis is wrong-headed in many ways, starting with the fact that it's a myth that there are many "independent voters" who are ruled by "kitchen table" issues. Most "independent" voters are partisan Democrats or Republicans but simply declare themselves as "independent" as a form of self-flattery. Truly, this myth should have been killed off completely by the 2020 election, where it appears Trump didn't lose a single ounce of support — he actually gained 11 million new voters — despite his complete and total failure on the much-ballyhooed "kitchen table" issues of the economy and the pandemic.

But really, the deeper issue is a moral vacuity of framing a violent attempt to overthrow the government as if it's an everyday horse race story. The disagreement between Democratic and Republican voters about the wisdom of armed insurrection isn't mere partisan bickering. American democracy is in very real danger of collapse, especially as one party continues to conspire with the president who leveraged violence in his effort to stage a coup. Addressing this as if it were the equivalent to a partisan spat over tax rates is a dereliction of journalistic duty.

In a surprising twist, it was the New York Times — which tends more often to fall victim to the false equivalence urge — that kicked off Friday morning with a responsible, accurate headline: "Republican Ties to Extremist Groups Are Under Scrutiny."

The Times' report bluntly addresses the extremism of the GOP, noting that the majority of "House Republicans supported President Donald J. Trump's baseless claims that the election had been stolen from him," and that many other members have "deeper ties to extremist groups who pushed violent ideas and conspiracy theories."

Trump's insurrection efforts failed, but this is not an excuse to minimize the situation. On the contrary, failure to take it seriously makes it that much easier for Republican leadership to continue conspiring with the people — especially Trump — most responsible for the insurrection. The more support from Republican leaders that Trump and others with fascist tendencies get, the likelier it is that the next attempt to overthrow the government will succeed. Only one side, the Republicans, has insurrectionists and leaders who support them. Media outlets need to not mince words when saying so.