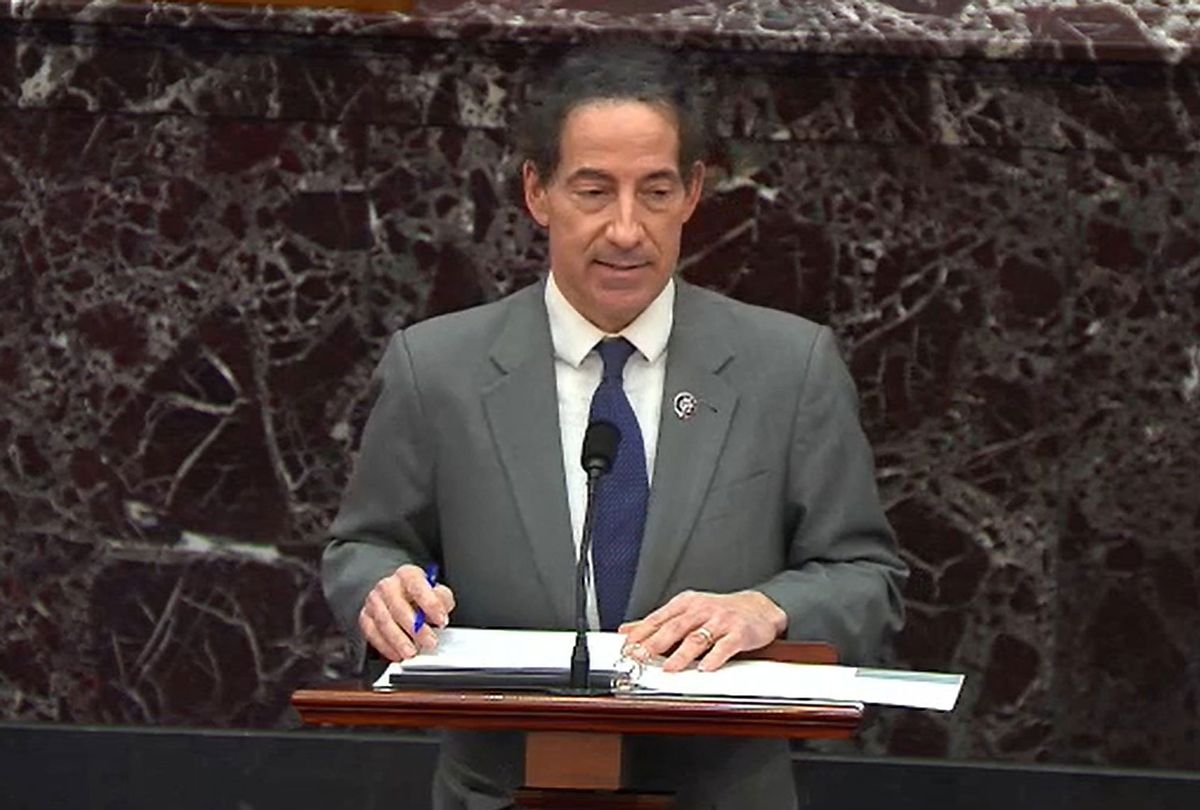 In this screenshot taken from a congress.gov webcast, Lead Impeachment Manager Rep. Jamie Raskin (D-MD) speaks on the second day of former President Donald Trump's second impeachment trial at the U.S. Capitol on February 10, 2021 in Washington, DC. House impeachment managers will make the case that Trump was “singularly responsible” for the January 6th attack at the U.S. Capitol and he should be convicted and barred from ever holding public office again. (congress.gov via Getty Images)
--

In the hours before the second day of Donald Trump's impeachment trial, Hillary Clinton tweeted her blunt assessment of the situation: "If Senate Republicans fail to convict Donald Trump, it won't be because the facts were with him or his lawyers mounted a competent defense. It will be because the jury includes his co-conspirators." The House impeachment managers then spent the rest of the day proving Clinton correct — even as they insisted that they were trying Trump and not the larger GOP.

In a careful case, the Democratic House managers laid out an astonishing amount of public evidence showing that Trump spent months riling up his supporters before he sicced them on the Capitol on Jan. 6 in an attempt to overturn the results of the 2020 election. It was such a slam-dunk case that, quite literally, the only reason any senator would vote to acquit is outright complicity with Trump's insurrection.

In his opening remarks, Rep. Jamie Raskin, D.-Md., argued that while Trump's defense attorneys downplay the Capitol insurrection as though it was merely a "bad accident" or a "natural disaster," Trump was "no innocent bystander."

"There was method in the madness that day," Raskin explained, noting that Trump's purpose in sending a violent mob to storm the Capitol was quite clearly to stop the counting of the electoral votes. He continued by pointing out how Trump "reveled" in the violence, noting that while most Americans view Jan. 6 as "a day that will live in disgrace in American history," Trump said it was a "day of celebration," tweeting enthusiastically to the mob: "Remember this day forever!"

Raskin was followed by Rep. Joe Neguse of Colorado who laid out evidence — from social media, videos from the riot, and court documents — that proves that the insurrectionists "were doing what [Trump] wanted them to do."

The entire afternoon was a devastating display of the evidence.

Rep. Joaquin Castro of Texas quoted Trump insisting that "there won't be a transition of power," but a "continuation." He played a video that showed how Trump supporters tried to turn those words into reality by trying to shut down vote-counting centers. Rep. Eric Swalwell of California laid out how Trump "was saying anything he could to trigger and anger his base" with his lies about the election. Rep. Madeline Dean of Pennsylvania tied Trump's campaign of threat and intimidation against state election officials to his violence. Del. Stacey Plaskett of the Virgin Islands played the video of Trump instructing the Proud Boys to "stand back and stand by," a message she said these violent groups "heard loud and clear," as evidenced by the way they adopted the words as a slogan and organized carefully prior to the insurrection.

And that's just a sample.

The second day of Donald Trump's second impeachment included an overwhelming amount of videos, photos, quotes, and other evidence House managers gathered to show that Trump cultivated a violent following he encouraged at every turn. Particularly distressing was previously unreleased footage that showed how angry and vicious the mob was — and how close they often were to the fleeing Congress members. The jury of senators was shown how rioters broke down a door into a room where Speaker of the House Nancy Pelosi's staff was fearfully hiding under a table. Plaskett carefully showed, from multiple angles, how U.S. Capitol officer Eugene Goodman lured the mob down one hall, mere feet from then-Vice President Mike Pence's hidden location. In another video, Goodman runs to rush Sen. Mitt Romney of Utah away, barely avoiding the murderous crowd. Romney later told reporters that he didn't realize how close to the mob he got that day.

"I was very fortunate indeed," Romney noted after Democrats concluded for the afternoon.

It's not a surprise that Trump's rioters believed that they would be safe from consequences. In sending them to the Capitol, Trump literally said, "you're allowed to go by very different rules."

One of the Proud Boys arrested for participating in the Capitol insurrection is going to war against Trump.

Dominic PEZZOLA's lawyer claims he was "one of millions of Americans who were misled by the President's deception."

He showed up Jan. in response to Trump's "entreaties." pic.twitter.com/9nfL2rtWly

Reportedly, the House managers want this case to implicate Trump, but not the larger Republican caucus. As the New York Times reported on Sunday, "managers were wary of saying anything that might implicate Republican lawmakers who echoed or entertained the president's baseless claims of election fraud," hoping that ignoring the subject of GOP complicity might lure more Senate Republicans towards voting to convict.

These efforts to draw a distinction between Trump and the Republican officials who egged him on continued on Wednesday. During his portion of the afternoon arguments, Rep. Ted Lieu of California emphasized how Trump repeatedly attacked members of "his own party" — particularly Pence — in an effort to distinguish between Trump and Republicans generally.

I'm told this is a deliberate effort by the managers to put "daylight" between Senate Rs and former President Trump. As a source said: "The managers need to convey that regardless of what we all think about election fraud, what President Trump did was a step beyond."

But the ugly truth of the matter is that the majority of Republicans are complicit — or, as Clinton said, co-conspirators. Indeed, the strength of the case that Democrats have been bringing in the impeachment trial proves it. There's no way to be an honest judge of this case and conclude that Trump deserves to be acquitted.

And yet, barring some miracle, it's clear that the vast majority of Senate Republicans — likely the 44 out of 50 who pretended to believe this trial is unconstitutional — plan to vote to acquit Trump. It isn't because they think Trump is innocent, something no one could sincerely believe. It's because they're complicit in Trump's insurrection. So much so, we should not hesitate to imagine they'd be supporting Trump right now if he had successfully pulled it off. Some aren't even hiding that fact:

Just left the chamber, where most members were at least partially engaged with @RepJoeNeguse presentation. The biggest exception: @HawleyMO - sitting up in the gallery with his feet up on the seat in front of him, reviewing paperwork, throughout.

Ultimately, it might not matter that House Democrats indulged this gentle fiction that Senate Republicans aren't complicit. It's a good faith effort to get GOP votes, one that is bound to fail. As Michelle Goldberg of the New York Times said, "House impeachment managers are bending over backwards to let Republicans separate themselves from Trump's worst behavior and Republicans are totally uninterested."

But after the vote is taken, all ambiguity should be erased. Trump is guilty. And anyone who shields him from consequences is doing so because they approved of his violent insurrection. And that includes the majority of Senate Republicans, except in that unlikely event that they change their plans to vote to acquit Trump.