Rush Limbaugh’s toxic patriotism will be his worst legacy

Rush Limbaugh might be dead, but his brand of toxic patriotism lives on 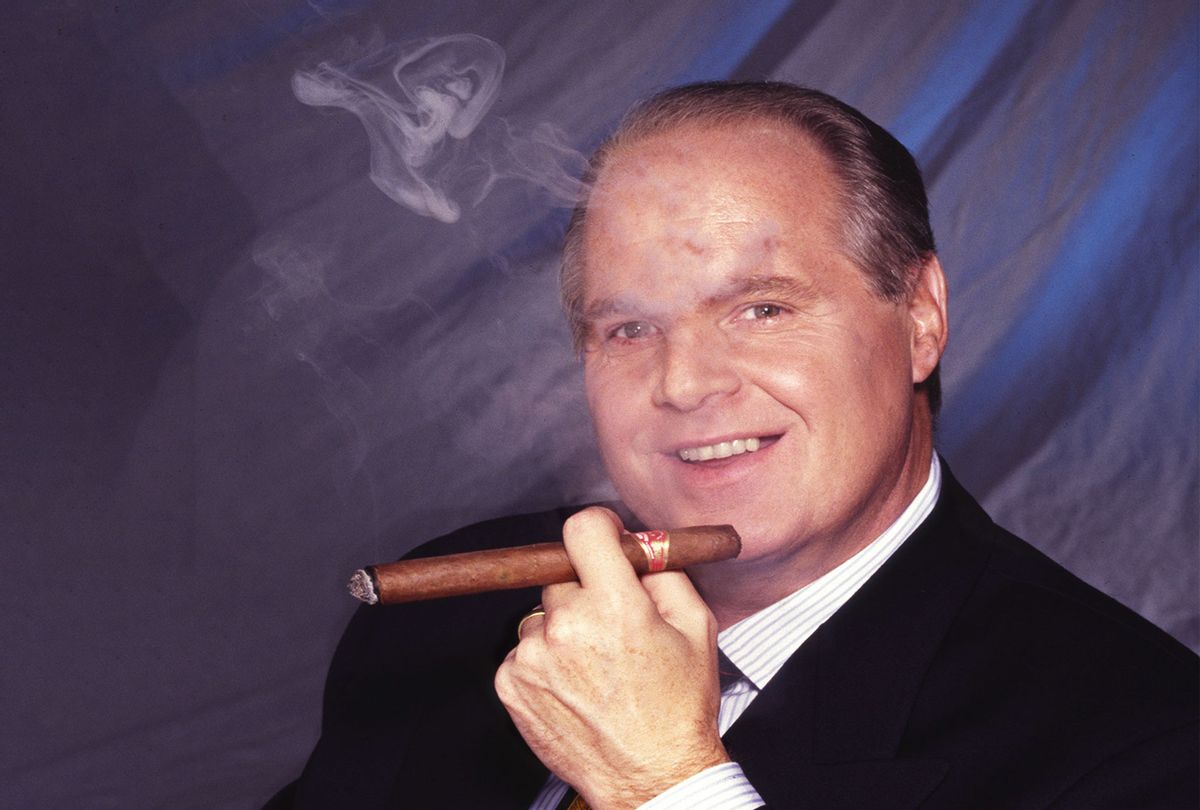 Back in 2014 I pissed off Rush Limbaugh. The source of his ire was a piece I wrote for Salon on the eve of Stephen Colbert stepping down as host of "The Colbert Report." In it, I suggested that Colbert's character on that show had played a valuable role in redefining patriotism for the left.

Limbaugh wasn't pleased. It led him to deploy his characteristic misogyny and call me a "professorette" as he twisted my argument in order to make his point. His angry rant included the fact that I was part of leftist academe, that I dared to criticize American exceptionalism, and that I had something positive to say about the legacy of Stephen Colbert's character.

Well, now that he's dead, I have something negative to say about his legacy.

Rush Limbaugh made America worse. He made the media worse, he made his party worse, and he made our democracy worse. He made toxic masculinity worse. He made white nationalism worse. Actually, he made a wide spectrum of noxious bigotry worse. Even more, his twisted invective passed off as reasoned arguments made our collective intelligence worse.

Rush Limbaugh left our country more angry, more divided, more stupid, more intolerant, more prejudiced, more arrogant and more incapable of solving any of our problems. Limbaugh created chaos and he fed off of it. There was never any moment when he wasn't trying to make everything worse so he could profit from his followers' fear and anger over it.

Much will be made of what will be Limbaugh's most lasting legacy. Will it be the way that his radio show single-handedly opened the floodgates for alt-right punditry? Will it be that his unique brand of manufactured outrage and angry hysteria became a seminal feature of right-wing rhetoric? Will it be that his vicious bigotry came to epitomize the "values" of the right? Or that his celebrity cult following paved the way to Trump?

These, of course, will all be a central part of his story, but they will not be the most significant. Instead, as we unpack the devastating consequences of his life on this nation, it will be his unique brand of toxic patriotism that will be his worst legacy.

Limbaugh certainly wasn't the first one to suggest that the left "hated" their country, but he was the most successful at amplifying that view and embedding it as a core feature of right-wing identity.

In Limbaugh's world patriotism was synonymous with right-wing politics. Thus, if the left criticized the right, it meant they hated their country. And when the right criticized the left, it demonstrated love of country. It was a perfectly circular logic that allowed the right to understand any form of critique as hatred and any disagreement as treason.

The consequences of this twisted version of nationalism have been devastating. Limbaugh offered up a fascist version of U.S. patriotism and, at least for many years, till he lost his edge to even more lunatic incarnations like that of Alex Jones and Glenn Beck, his toxic patriotism was his trademark symbol.

As Limbaugh put it in his rant against me: "I can't escape these professors and these lies and all this crap that's in the media about everything that's so-called wrong with America. Meanwhile, we're losing everything this country's known for."

The number one goal of the left, according to Limbaugh, is to destroy the right. For him, the left sees the right as its enemy. "I really do think that they are so twisted with this hatred for us," he cried.

But who exactly hates whom? I mean, yes, I — along with many, many others — critique the right. Yet, critique is not akin to hatred. Nor is questioning American exceptionalism. Debating the core values of U.S. nationalism is not hatred, either. But for snowflake Limbaugh and his followers, any questioning of them feels like a full-on assault.

In this way Limbaugh manufactured liberal hatred of the right in order to stoke right-wing hatred of the left, all in the service of merging partisan hatred with patriotism.

It was a brilliant move, because it allowed Limbaugh to suggest that the right is both a victim of left-wing attacks and also the only ones who care about the country. The left, according to him, is too busy hating the right to care about preserving the nation. Thus, the right are aggrieved nationalists left to fight off treasonous liberals while elevating their nation to greatness.

And that's where Colbert comes in, because his in-character persona on "The Colbert Report" did an excellent job of parodying toxic right-wing patriotism and suggesting that it was high time for the left to fight for an alternative version of the country. As I argue in "Colbert's America," Colbert was uniquely focused on wresting the notion of patriotism away from the right and suggesting that an active, engaged and critically thinking citizenry could offer a powerful contrast of national values.

Colbert's parodying of exaggerated patriotism on his show had him swooping in on the opening credits accompanied by a bald eagle and an American flag only to take a seat in a studio that was filled with Americana. Colbert often used his satire to poke at Limbaugh, who functioned as one of his character's alter egos, alongside those based on other right-wing pundits like Bill O'Reilly and Glenn Beck.

In a clip from March 5, 2009, Colbert highlighted the fact that Limbaugh loved to suggest he was more patriotic than anyone on the left — in this example, President Barack Obama, who Limbaugh claimed was violating the principles of the Constitution. In his anti-Obama rant, Limbaugh then offered up a quote of the sacred document. Except that the quote was from the Declaration of Independence, not the Constitution; and even worse, Limbaugh got it wrong anyway.

Colbert's bit did an excellent job of pointing out what a bunch of buffoons these so-called patriots are. They don't even know the patriotic documents they accuse the left of disparaging.

But, in contrast, Colbert did. He used his character to not just mock the faux patriotism of Limbaugh, but also to give his own viewers a lesson in U.S. history. Throughout his show, through recurring segments like "Better Know a District," Colbert outed self-proclaimed patriots by showing how little they actually knew about their country. Instead, he suggested, all they really knew was that they hated the left.

So, it was my defense of Colbert's patriotism that really set Limbaugh off. Because for the most part, up until Colbert and Jon Stewart used their satire shows on Comedy Central to satirize right-wing "values," there really hadn't been an effective counter to the vicious nationalism on offer from Limbaugh and his allies. Their satire served as a particularly good foil for the rise of extremist patriotism because it was able to use satirical irony to expose the absurdity of saying that the best way to love your country is to hate the left. Colbert and Stewart suggested that hatred wasn't a patriotic value, but reason, debate, attention to the truth and critical engagement were.

Shortly after Limbaugh decided to attack me to the over 3 million listeners who tended to tune in to his show every hour, I got death threats. They came via social media, via email and even in the form of creepy hand-written letters that I had to turn in to campus police.

My experience wasn't unique. In fact, it was common for Limbaugh's listeners to use death threats, nasty messages, and social media stalking to harass anyone Limbaugh had chosen to single out on his show. As has been noted by Dannagal Young, the rise of outrage as the core "virtue" of the right has been decades in the making. And, as Peter Isackson explains, death threats have "become one of the standard means of expression for aggravated outrage."

But Limbaugh's special contribution was to make death threats, aggressive attacks, and belligerent bullying the ultimate act of patriotism. He infected conservative patriotism with vicious hate.

He might be dead, but as we all witnessed on January 6, the legacy of his toxic patriotism remains very much alive.