Student debt is causing a mental health crisis. Forgiving it would ease distress for millions

“It's just kind of this constant anxiety, the constant weight of this extra expense," one debtor said 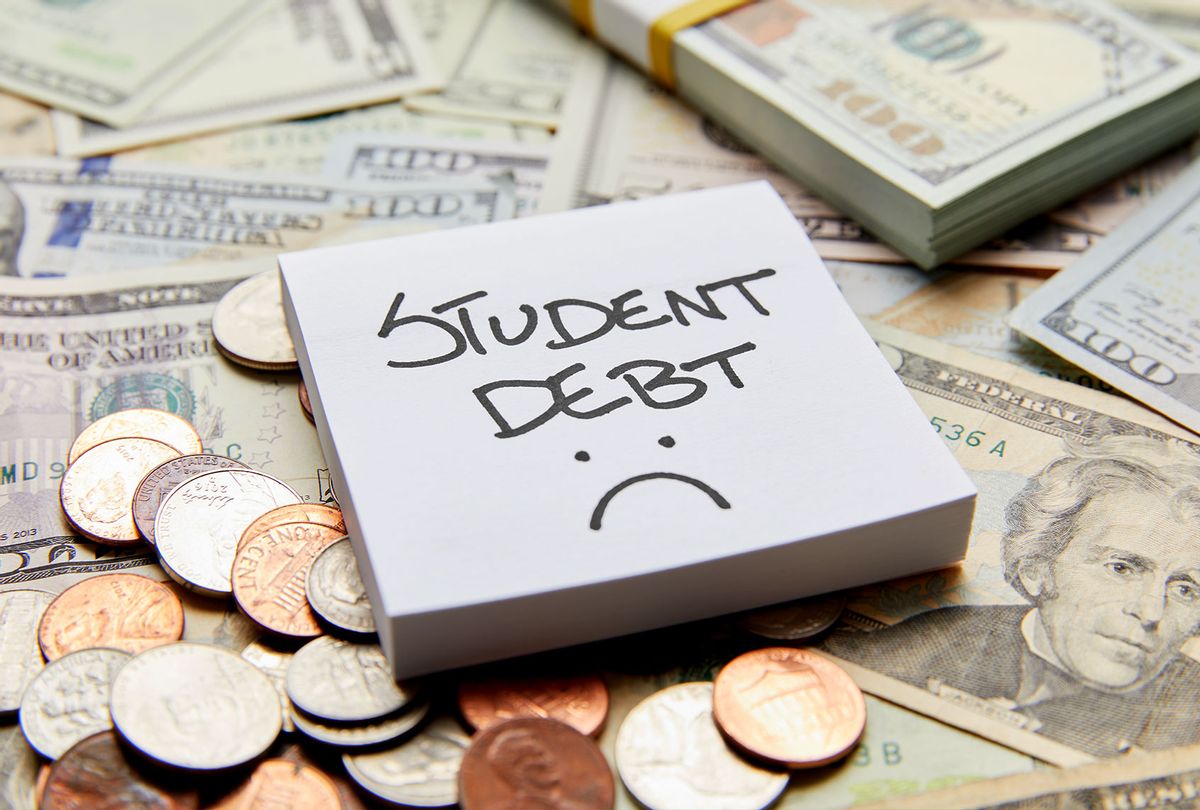 President Joe Biden's inauguration also inaugurated a public debate over student loan debt, particularly what his administration might do to alleviate it. Senate majority leader Chuck Schumer (D-NY), along with other House and Senate Democrats, have repeatedly urged Biden to forgive $50,000 of individual federal student loan debt through an executive order during his first 100 days in office. But this week, during a Feb. 16 CNN-sponsored town hall, Biden dampened hope of that happening.

"The American dream is to succeed, but how can we fulfill that dream when debt is many people's only option for a degree?" asked one woman at the CNN town hall. "We need student loan forgiveness beyond the potential $10,000 your administration has proposed. We need at least a $50,000 minimum. What will you do to make that happen?"

Democrats in Congress like Rep. Alexandria Ocasio-Cortez (D-NY) have argued that Biden needs to be "pushed" on the issue. Meanwhile, payments for federal student loans are delayed with 0 percent interest through Sept. 30, 2021 due to the economic crisis precipitated by the pandemic.

The United States is unique among developed countries for shunting a huge amount of the cost of college onto its students; most European nations have free or heavily-subsidized post-secondary educations. That creates a disproportionate economic burden for America's college graduates compared to our international coevals, and one which often manifests itself in ways beyond the mere economic: American college graduates make different life decisions because of their indenture, and have a concomitant increase in stress and anxiety as a result.

Previous research has shown that student debt is likely to delay home ownership, restrict career choices, discourage entrepreneurship and lead to a higher dissatisfaction in career choice — and there's also an inextricable link to poor mental health. With around 43 million borrowers owing $1.6 trillion in federal student loans, it seems as though even minimal forgiveness could have reverberating social and psychological effects on the mental health of the nation's tens of millions of debtors.

Randy Withers, 45, graduated from Florida State University of 1997. He went to school to be a teacher for 10 years, but when the economy crashed in 2008 his world was upended. He lost his house, and career — since he was working in a private school — which eventually led him to go back to school in 2011. He originally borrowed $40,000 to get a master's degree in clinical mental health counseling, which ended up costing $20,000 a year. He graduated with over $100,000 in student loan debt; yet since the interest kept accumulating, he is up to $145,000 now.  Withers currently works at a psychiatric hospital.

"I will never, ever, ever be able to pay off those student loans — it's just simple math," he said. "I don't work in a career where I make enough money to do that."

"It's more of a long term slow-burn anxiety . . . it's like a monster on your back that, you know, you just can't get rid of. It's not that I'm unwilling, I just lack the economic means to to pay it off," Withers said. "I made these choices to go into school, I'm not blaming anybody, but it does take an emotional cost — it's like carrying a mortgage for a house you don't live in."

From a clinical perspective, he can see why people become depressed, anxious and even have suicidal ideation from having too much debt.

"When you lack resiliency and coping skills, and also when you don't understand the various mechanisms that are in place, as far as student aid relief, and the income sensitive type stuff, it can be really quite overwhelming," Withers said.

Cass Kim is a speech language pathologist, a career that requires a master's degree. She graduated with over $100,000 in debt. Four years ago, when federal loan interest rates increased, she refinanced her loans, which she's been required to pay off during the pandemic. She still has $40,000 in student loan debt to pay off.

"It's just kind of this constant anxiety, it's this constant weight of just this extra expense — because it's not like I'm paying $200 a month, I pay $800 every month," Kim said. "It's the anxiety of 'Am I going to make this payment?' 'How long am I going to pay this?' and just always thinking about what else I could be doing with that money."

"I created this book line and it's beautifully created, and I just can't help but think like if I had, you know — $400 more a month, like, 'how much bigger I could make this?' and how many more eyes I could get on it," Kim said.

Jeff Neal said he made the "fatal error" of going to college and majoring in English. He graduated in 2009, and was unable to find a job. It wasn't until he got a job at a startup ecommerce business as an office manager that he realized with his student loans, and degrees, it was going to be hard to "prosper" in life. He started spending all of his free time picking up random gigs on Craigslist. He ended up starting to sell live roaches online to reptile owners to get out of debt. Neal said becoming obsessed with paying his debt has had a negative impact on his mental health.

"You become obsessive, because it's all you think about, you become sleep deprived and it's difficult to focus on anything else,' Neal said. "It's kind of damaged some relationships, just because you're unwilling to talk about other things when you spend time with other people, an it doesn't have the most positive effects when you're just solely focused on one mind-numbing objective — which is to clear out your debt and just trying to increase your net worth."

For people like Kim, forgiving $10,000 of federal student loans would be of little help because she already refinanced.

"The reason that I refinanced into private loans is specifically because the interest rate was getting driven up so much on the federal loans," Kim said. "So it won't personally affect me, but I think that the more that they can forgive the better."

"If everybody's trying to focus on this overwhelming amount of debt that they're trying to pay off, they're just not going to have the same kind of money to put back into the economy," Kim added.