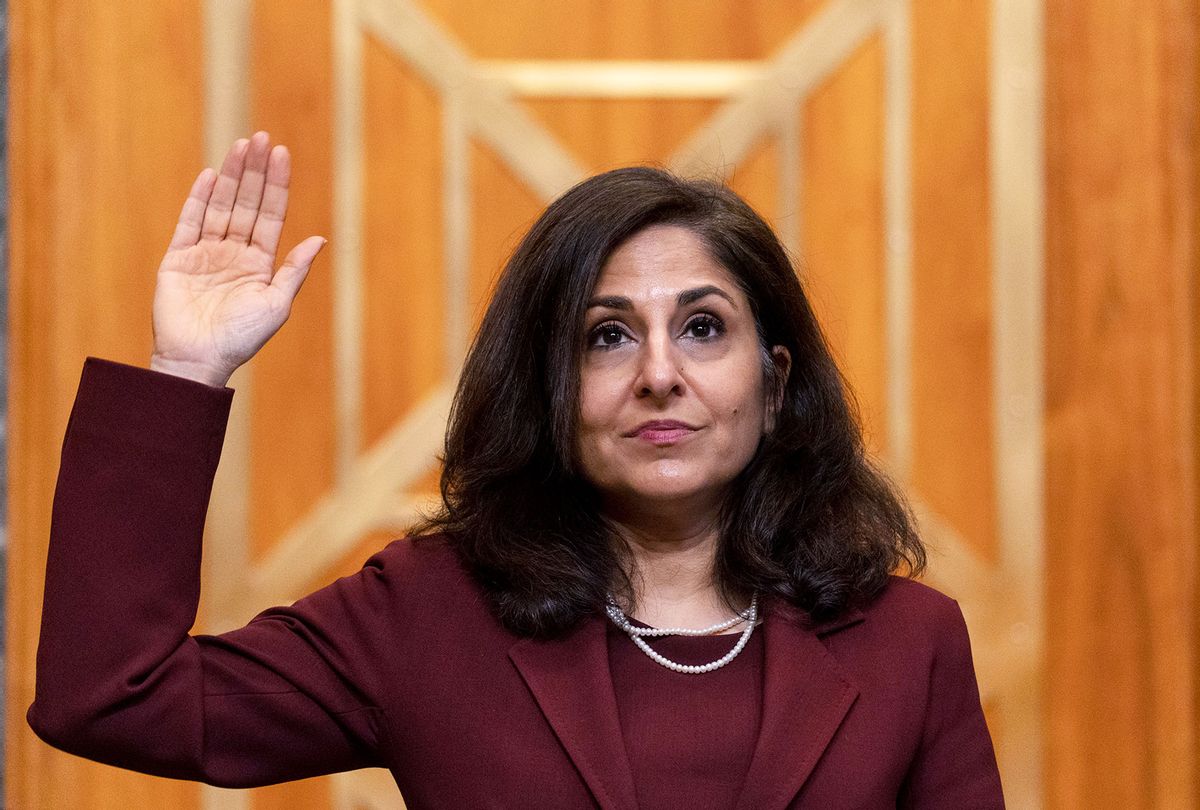 Neera Tanden, President Joe Bidens nominee for Director of the Office of Management and Budget (OMB), is sworn in to testify during a Senate Committee on the Budget hearing on Capitol Hill on February 10, 2021 in Washington, DC. (Andrew Harnik-Pool/Getty Images)
--

President Joe Biden withdrew his nomination of Neera Tanden to head the Office of Management and Budget on Tuesday after Sen. Joe Manchin, D-W.Va., joined Republicans in opposing her confirmation.

"I have accepted Neera Tanden's request to withdraw her name from nomination for Director of the Office of Management and Budget," Biden said in a statement. "I have the utmost respect for her record of accomplishment, her experience and her counsel, and I look forward to having her serve in a role in my Administration."

Tanden, the president of the Center for American Progress (CAP) and a longtime ally of former Secretary of State Hillary Clinton, drew bipartisan backlash after spending years on Twitter hitting out at conservatives and progressives alike. During the Democratic primaries, Tanden had frequently targeted Sen. Bernie Sanders, I-Vt., who now heads the Senate Budget Committee that was reviewing her nomination. Tanden apologized during a hearing before the committee last month. Sanders, who also pressed Tanden about the corporate donations CAP has received under her leadership, has never said how he would vote on her confirmation. Her hopes quickly faded in the 50-50 Senate after Manchin announced his opposition to Tanden last month over her "overtly partisan statements."

The White House insisted for more than a week that it would work to find Republican votes to replace Manchin, but failed to attract any takers among moderate Republicans like Susan Collins of Maine and Mitt Romney of Utah. The Budget Committee postponed its vote on Tanden's nomination last week ahead of Tanden's meeting with Sen. Lisa Murkowski, R-Alaska, but a senior administration official told The New York Times that the senator made it clear she would not support the confirmation.

Murkowski, who reportedly sought concessions for her state in exchange for her support, said she never told the White House how she would vote.

An administration official told CNN that the White House felt the political capital needed to salvage Tanden's nomination was better spent on passing the next round of coronavirus relief.

Tanden formally asked Biden to withdraw her nomination in a letter released by the White House on Tuesday.

"I appreciate how hard you and your team at the White House has worked to win my confirmation," Tanden wrote. "Unfortunately, it now seems clear that there is no path forward to gain confirmation, and I do not want continued consideration of my nomination to be a distraction from your other priorities."

White House chief of staff Ron Klain has said that Tanden would land another job at the White House that does not require Senate confirmation if her nomination was scrapped. Biden in his statement said he looks "forward to having her serve in a role in my Administration."

White House officials knew about Tanden's social media history but believed it would not sink her nomination after the Senate confirmed several of former President Donald Trump's nominees with long histories of antagonistic or offensive tweets — and after Trump himself spent years spewing vitriol on Twitter before being banned by the social network.

"You should be judged by the time. And the time we were in, we had a fool in the [White House] tweeting all kinds of shit," a White House official told PBS News' Yamiche Alcindor. "So, it's just remarkable that people can't separate that."

Biden's team also believed senators would rally around the nomination of the first Indian-American and first woman of color to head the OMB.

Manchin, who has emerged as an early roadblock to the Biden agenda, was apparently unconvinced by Tanden's contrition at last month's hearing.

"I believe her overtly partisan statements will have a toxic and detrimental impact on the important working relationship between members of Congress and the next director of the Office of Management and Budget," said Manchin, who previously voted to confirm longtime Twitter troll Ric Grenell as ambassador to Germany in 2018. "For this reason, I cannot support her nomination."

Tanden had deleted more than 1,000 old tweets after the November election, which Collins said "raised concerns about her commitment to transparency."

Collins, who voted to confirm many of Trump's most controversial nominees, including Supreme Court Justice Brett Kavanaugh, said Tanden's past actions showed she has "neither the experience nor the temperament to lead this agency."

It's not unusual for new presidents to lose some confirmation battles. Former President Barack Obama failed to get his first nominees to head the Commerce and Health and Human Services departments confirmed. Though Trump had more success early on, toward the end of his administration he effectively decided to bypass the confirmation process entirely, appointing many Cabinet and sub-Cabinet officials secretaries in acting capacities, with varying degrees of success. Though many progressives on or near the Democrats' left flank expressed relief that Tanden's nomination has been pulled, her supporters hit out at the double standard facing Biden's picks after four years of Trump.

"I respect Neera's decision to withdraw her nomination for OMB. What I don't respect is any Senator who chose to apply a different standard to her 'temperament' and 'tweets' as a woman of color than they did to similar postures of the white men who they voted for with no apology," tweeted Ilyse Hogue, the president of NARAL Pro-Choice America. "Allowing a pass on these double standards is corrosive, wrong, and damaging to our democracy which thrives on diverse representation in government."

The failed nomination underscores Biden's perils with a 50-50 Senate and ongoing Republican obstruction efforts. Biden's Cabinet is being filled at the slowest pace in modern history, according to the Associated Press, with just 13 of his 23 Cabinet nominees confirmed six weeks into his presidency. By comparison, the previous four presidents had 84% of their core Cabinet picks confirmed about a month into their terms. After sinking Tanden's nomination, Republicans have now turned their ire to Xavier Becerra, Biden's pick to head HHS, accusing him of being a culture warrior over lawsuits he filed defending abortion rights and challenging Trump's policies as California's attorney general. Unlike Tanden, however, Becerra is expected to be confirmed with bipartisan support.

Biden's potential fallback options to head OMB include Gene Sperling, who led the National Economic Council under Obama, and Ann O'Leary, the former chief of staff to California Gov. Gavin Newsom, according to the New York Times. Many top Democrats, however, are pressing Biden to choose Shalanda Young, who is currently nominated to be OMB's deputy director. Young, who would be the first Black woman to lead the agency, served for over a decade as a leading staff member to Democrats on the House Appropriations Committee and has received support from House Speaker Nancy Pelosi, D-Calif., Majority Leader Steny Hoyer, D-Md., Majority Whip Jim Clyburn, D-S.C., the Congressional Black Caucus and even Sen. Richard Shelby, R-Ala., the top Republican on the Senate Appropriations Committee. Shelby, who is retiring, said last month that Young "would have my support, and I suspect many of my Republican colleagues would support her as well."

"Everybody that deals with you on our side has nothing but good things to say," he said. "You might talk me out of voting for you, but I doubt it. … You'll get my support, maybe for both jobs."