Is Trump's “true inauguration day” upon us? No, but Capitol Police boost security 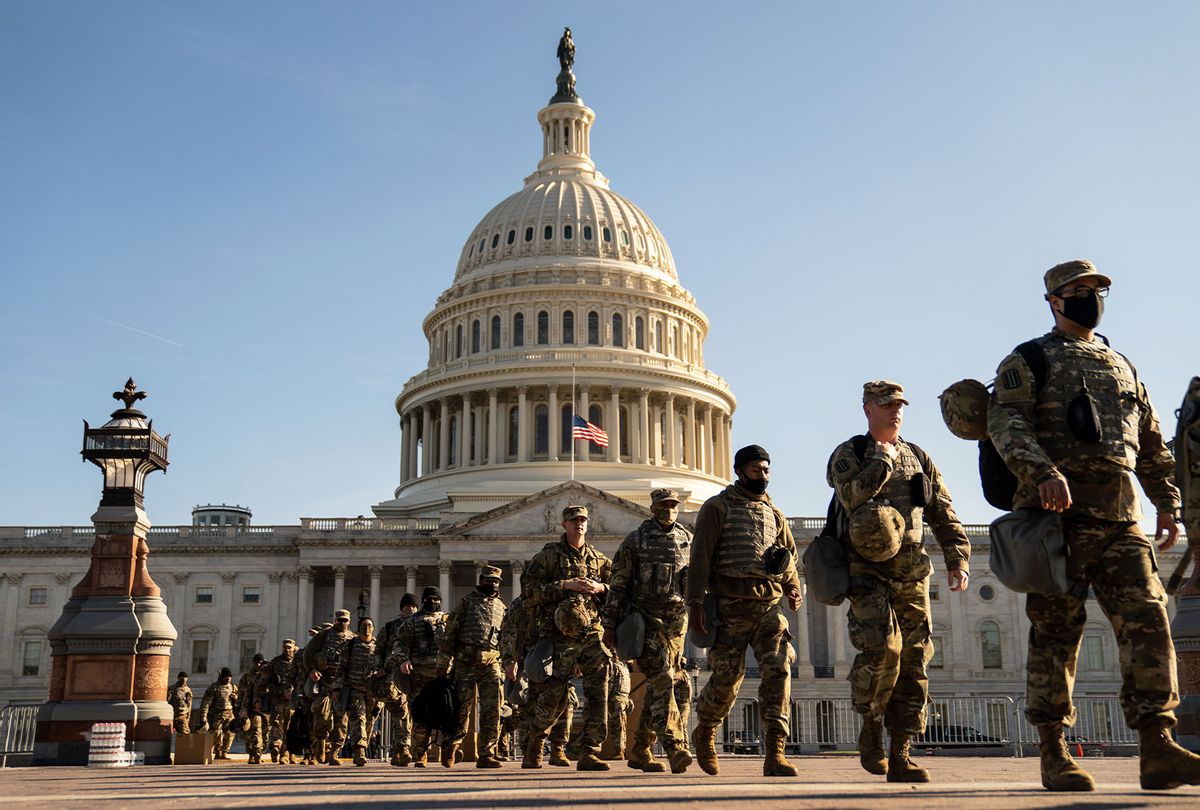 Members of the National Guard, outside the U.S. Capitol Building a day after the House of Representatives impeached President Donald Trump, and over a week after a pro-Trump insurrectionist mob breached the security of the nations capitol on Thursday, Jan. 14, 2021 in Washington, DC. An estimated 20,000 National Guard troops are expected to be deployed to the city to support law enforcement around three times the total number of American troops deployed abroad in Iraq, Afghanistan, Somalia and Syria. (Kent Nishimura / Los Angeles Times via Getty Images)
--

The Capitol Police said they are ramping up security and calling in additional officers ahead of March 4, which some QAnon conspiracy theorists hopelessly believe to be the "true" inauguration date when former President Donald Trump will be returned to office.

"The Department is aware of concerning information and intelligence pertaining to March 4th and continues to work with all of our law enforcement partners," a spokesperson for the Capitol Police said in a statement on Monday. "Based on the intelligence that we have, the Department has taken immediate steps to enhance our security posture and staffing for a number of days, to include March 4th. The Department has communicated our enhanced posture as well as the available intelligence for the entire workforce."

Acting House Sergeant-at-Arms Timothy Blodgett said in an internal memo obtained by NBC News that his office is working closely with the department "to monitor information related to March 4th and potential protests and demonstration activity surrounding what some have described as the 'true Inauguration Day.'" Blodgett added, however, that there was "no indication that groups will travel to Washington D.C. to protest or commit acts of violence."

NBC News also reported that there is no evidence of planned protests or events in QAnon forums, but an FBI official said last week that the bureau is aware of chatter among far-right groups that "Thursday could be the next rallying point." Some conspiracy theorists have urged followers to avoid any Thursday events over worries that there could be "false flag" operations intended to trap QAnon followers.

"There is little promotion of action around March 4th," Daniel Jones, the head of the anti-disinformation nonprofit Advance Democracy, told the outlet. "Of course, there may be detailed planning occurring on closed channels that we're not seeing.  Conspiracy theories around the election persist, and, remarkably, are still promoted by political leaders on the right.  There should be no doubt now that this sort of rhetoric has consequences — so we continue to be concerned about the potential for violence."

QAnon adherents, who claim to believe that Trump is secretly fighting a satanic deep state cabal of Democratic child traffickers, albeit without an iota of evidence, have repeatedly predicted that Trump would lead mass arrests on several dates in 2018, 2019 and 2020. Those events did not occur. After struggling to cope with the fact that President Joe Biden was inaugurated on Jan. 20 rather than arrested, some believers hatched a fallback theory that Trump would return to office on March 4, which was the date of the inauguration until 1933. The theory largely stems from a brain-melting misinterpretation of a 150-year-old law that formally incorporated the Washington, D.C., municipal government, which some QAnon adherents have bizarrely taken to mean that the entire country was "incorporated" like a business.

"They believe that the United States was turned into a corporation and that invalidated, in their minds, everything that happened after that," Julian Feeld, co-host of the "QAnon Anonymous" podcast, told Salon last month. "They believe, essentially, that a company was created called the United States of America Inc., or something like that. And that meant that we stopped being a country, like, it broke the Constitution, and made everything after that basically an act of sedition and treason."

The FBI labeled QAnon a "dangerous extremist group" in 2019. Several QAnon followers were charged in the deadly Jan. 6 Capitol riot. Ashli Babbitt, the rioter killed by Capitol Police while trying to breach the House chamber, had frequently posted about QAnon conspiracy theories on social media.

Though some followers have pointed to March 4 as the possible date for Trump's return — and Trump's Washington hotel drastically hiked its room rates ahead of the date — Blodgett said in his memo that "the significance of this date has reportedly declined amongst various groups in recent days."

But Marilyn Mayo, a senior research fellow at the Anti-Defamation League's Center on Extremism, said that does not mean QAnon followers are giving up. She pointed to renewed chatter on conspiracy theory forums after Trump's speech at the Conservative Political Action Conference on Sunday, in which he hinted at another presidential run.

"There's renewed hope," Mayo told USA Today. "A lot of people believe, without talking about a specific date, that Trump will be president, and that the military will somehow be involved."

The fracturing of QAnon groups in the wake of Trump's defeat has set some followers on varying courses in the choose-your-own-adventure nature of the conspiracy theory. Some QAnon followers believe Trump will return on May 20, which is 120 days after the January 20 inauguration and the date they believe — again, on absolutely no plausible evidence — that Trump invoked a plan to reset the national debt and abolish tax collection.

"That's when the military can come in and take over. And then the entire country will be reset back to before the United States became USA Inc," Robert Guffey, an author and lecturer at California State University, Long Beach, who tracks the movement, explained to Salon in February. "Trump will come back and the military will pull Biden out of the White House. Then all the debt goes away and the IRS is abolished. And then, at that point, Trump starts releasing all these hidden patents for free energy. It's going to be utopia and all the Democrats will be in Gitmo. Then, when that doesn't happen, they'll either create another fake date or cobble up reasons why Joe Biden is actually a hologram and Trump is actually in the White House."