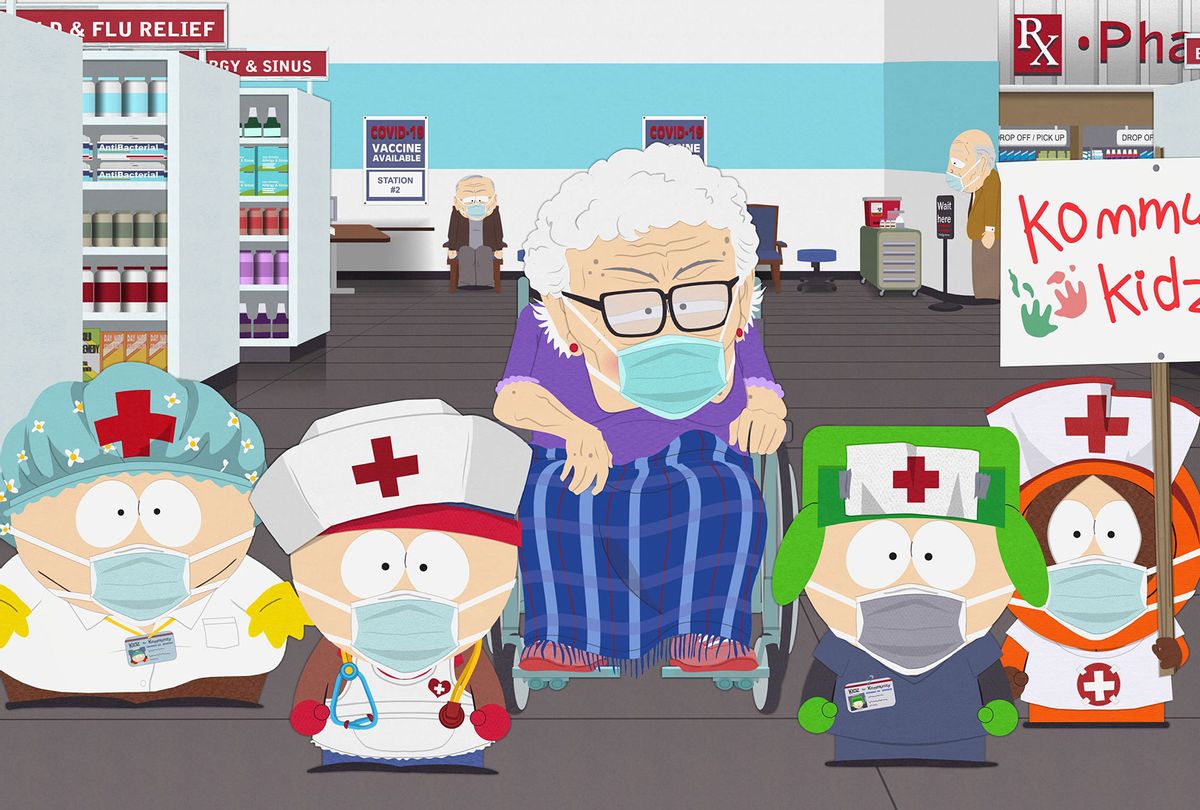 One day we're going to look back upon all this and laugh. Seriously though . . . no. No we won't. Provided enough of us recall the broader details of this pandemic year, very few will find anything funny about it. A more likely scenario takes the shape of choosing to forget and move forward, having learned nothing. Not all of us can or will; bearing the weight of 500,000 deaths does that to a country; or perhaps it's better to say, it should.

But if there's anything we should recognize on this one-year anniversary of the global pandemic, it's that many aspects of America society remain fundamentally broken. A glorious summer may be a real possibility. Returning to a previous state of "normal" probably is not.

That about sums up the general message of the "South ParQ Vaccination Special," the hour-long companion to last fall's "Pandemic Special" and the only new episode of the series we've seen in the 15 months since the 23rd season's finale in 2019. Referring to it as a companion is an assumption, I'll admit. Although Matt Stone and Trey Parker previously oversaw serialized seasons of the animated series, they returned to one-offs after the 2016 election.

A few changes had to remain consistent including the election of the show's Donald Trump stand-in Mr. Garrison to the nation's highest office. That's something the creators probably weren't expecting and had to follow through the 21st, 22nd and 23rd seasons. Having him roast a scientist alive at the end of "The Pandemic Special" before cheerfully reminding the audience to vote was a brutally humorous shocker. In light of Wednesday night's new hour it also doubles as a plea.

Last fall Parker, who wrote and directed that hour and "Vaccination Special," may not have predicted how extensive QAnon's infection would spread or even how quickly pharmaceutical companies would develop effective vaccines.

But when Stan said, "I can't take these shutdowns anymore and I'm scared of what it's doing to me," we should have paid closer attention. Maybe the "South Park" guys didn't have a clue as to how the pandemic would reshape their two-dimensional world back then. They do now.

"South ParQ Vaccination Special" begins with relatable absurdity and ends with an imperfect reset of the show's world that rebuilds a wall between it and our society's very real madness. Everything in-between, like life itself right now, feels irregular.

The opening scene restyles the town's local Walgreens as an exclusive club complete with velvet rope and bouncer, with elderly patrons designated as V.I.P.s.

Once vaccinated the town's old folks go full "Cocoon" – they're revitalized and mischievous, taking over bars and burning rubber on motorcycles.

While this is taking place, at South Park Elementary Cartman worries that the forced separation of quarantine has threatened to break up the "bro-ship" he has with Stan, Kyle and Kenny, inspiring him to pull a prank on a teacher in the hopes of lifting everyone's spirits.

Since he never thinks about anyone but himself, Cartman doesn't get why the teacher responds by ranting about risking her life only to be mistreated and walks off the job. This further endangers said "bro-ship," so Cartman redirects his tendency toward opportunism into organizing the boys to steal enough vaccine to inoculate the school's teaching staff.

This is the scenario to which a post-White House Mr. Garrison returns flanked by Mr. Service, a Secret Service agent sporting a thong instead of trousers.

Most of South Park hates him, including the administrators at South Park Elementary, who refuse to hand his old job back to him. But then he stumbles across a family of supporters, the Whites, who also organize the town's QAnon faction.

From there Parker weaves his usual web of pandemonium only to tear it apart at the climax. Classrooms empty out after the cult organizes a private teaching service, "Tutornon," that indoctrinates most of the children into a youth sect called Lil' 'Q'ties.

The boys succeed in their mission only to be set upon by hordes of people who also want the vaccine – and even Kyle, who is usually sensible, can't resist attempting to steal some for his parents. All of it collapses into a battle royale in front of the school at the same time that Mr. Garrison and Mr. White discover that in the world of "South Park," one part of the QAnon conspiracy is true: There really are Hollywood elites controlling their world. Their names? Trey Parker and Matt Stone.

Not every "South Park" episode succeeds in its aim. Some of them aren't particularly funny. The "South ParQ Vaccination Special" is an odd entry, though, because reminds us that sometimes hilarity is beside the point. Sometimes we need to see the obvious and disturbing parallels between actual examples of human behavior and the facile reasoning that informs cartoon characters' decisions.

The "Vaccination" one-off proves the near impossibility of satirizing a reality that has become a living parody to such a degree as to make one-upping it nearly pointless, and in case you haven't noticed, this is the world we're living in right now.

We really do have teachers and parents preaching QAnon conspiratorial nonsense to kids, or attempting to pass off the big lie about November's election results as fact. We really do have wealthy people going to impossible lengths to obtain a vaccine meant to protect members of vulnerable populations, including working class folks who don't have the luxury of staying at home.

In both cases the reasoning is similar to Butters' excuse: "I just wanted to believe in something that got me out of the house."

Usually "South Park" refracts the image of who we are back to us in a way that skewers our smug sense of righteousness, snickering at religion, politics and all manner of sacred cows while usually validating some part of our beliefs. The land of flawed logic is their playground. And yet, what is there to laugh at in our current state of affairs? An alarming number of people are so hungry to return an inept and dangerous man to power that they refuse to believe facts regardless of who is presenting them.

A dangerous band of terrorist cultists attacked the capitol. People died there, on top of the half a million people dead of COVID-19. Yet half of our political leadership, along with their followers, wants us to move on. Sadly, we have, as Wednesday's special depicts by having the town gather for a character's funeral only to ditch the mourning midway through the eulogy, kick over chairs and start partying.

There is no "going back to normal" in our reality. "South Park," though, is subject to the whims of its makers, which it shows by zapping Mr. Garrison, Mr. White and Mr. Service into an arctic void. In a flash Mr. Service turns into Mr. Hat, and Mr. White – railing at the unseen forces controlling everything – endures a series of ridiculous transformations, including mixing up his body parts and putting him in a shapeless dress, before turning him into a gigantic talking phallus. The perspective shifts, showing Mr. Garrison, and us, how this world works, that at any time the people making it can add layers or remove them. So Mr. Garrison strikes a deal with his invisible, omnipotent puppeteers – everybody in town gets shots, and he gets his old job back. The lesson he's learned, he explains, is to always be sure to be on the same side as the people with the most power.

It's as if the last five years of madness never happened.

Stan, Kyle Cartman and Kenny won't forget it. As the special ends, their "bro-ship" is fractured, and they agree to share custody of Kenny using the standard 2-2-3 schedule familiar to children of divorce.

"South Park" has depicted existential crises several times through its 23 seasons and somehow manages to keep going. These pandemic quarantine-created specials are evidence of its dedication to rolling with the times, however that manifests.

Although Comedy Central hasn't set a premiere for its next 10-episode season, it's been renewed through 2022 and the channel is more or less keeping the lights on by heavily stripping repeats throughout the week.

Between this and access to the full library of past seasons on HBO Max, it's very easy to escape to ye olden pre-pandemic times when the show inflated the vulgarity of our culture-wide egocentrism in ways that made us roar.

But if the "Pandemic" and "Vaccination" specials aren't the most entertaining entries in the "South Park" library, that's because they refuse to discount the ways in which this past year on top of the four that preceded it have changed the boys, and us, and Parker – and presumably Stone. By admitting to this, they can also do something those of us living in a three-dimensional living, breathing reality can't do. They can rebuild the divide between the world and their cartoon, and write a story in which its star characters find ways to air their grievances and get past them.

They can even decide to simply and eventually agree to move on and return to the way things have always been, reminding us that while "South Park" isn't really America, it is a true mirror of who we really are. One day soon we'll be eager to belly laugh at what it shows us. Just not now.

The "South ParQ Vaccination Special" is available to stream for free online.