Green buildings and electric cars are the new Potato Head and Dr. Seuss in this round 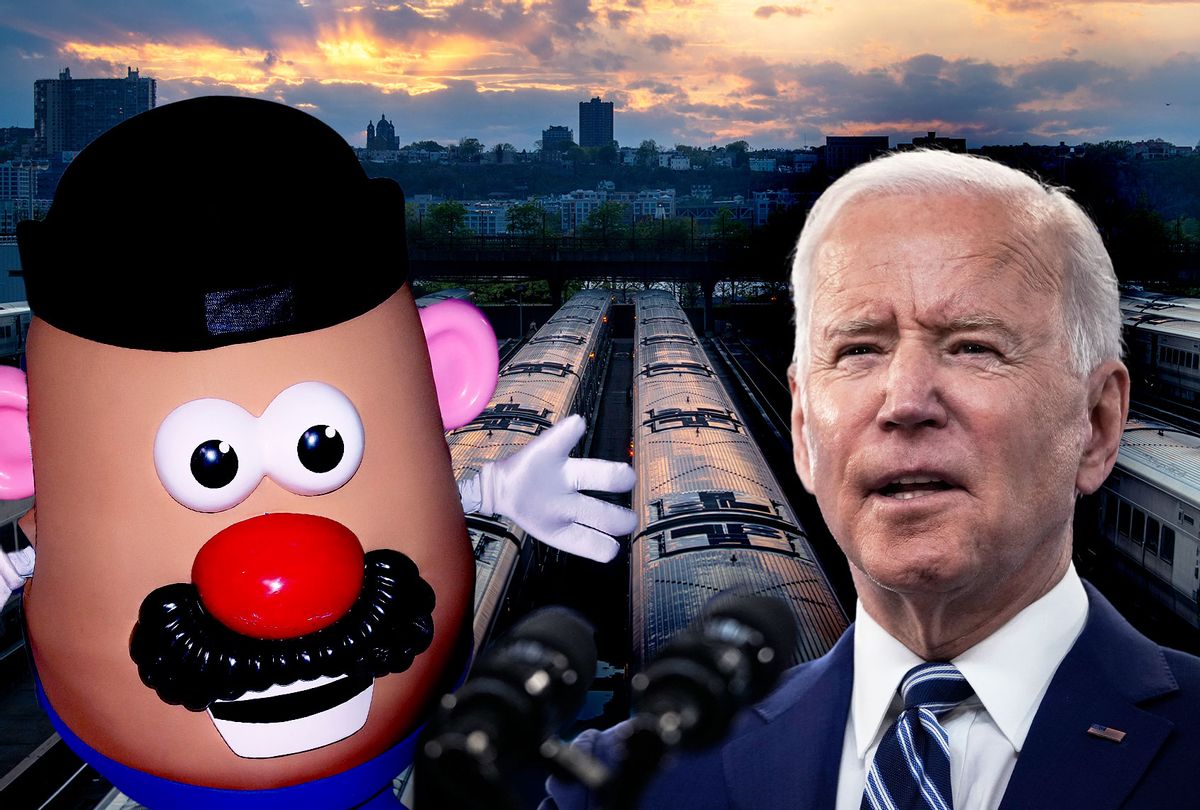 But this kind of framing is misleading. It is true that congressional Republicans oppose this bill and there is nothing that Biden could do, any concession he could make, that would induce Republicans to vote for it. But with the actual public? Well, this bill is a big hit. It is even a bipartisan hit.

Buried in the new Morning Consult/Politico poll is an eye-popping statistic: Voters by a 2-to-1 margin prefer a $3 trillion infrastructure bill that includes tax hikes on $400K+ and corporations over one that excludes those tax hikes.

This follows polling from Data for Progress that shows 69% of Americans support the plan, including half of Republicans.

Republican politicians oppose the bill, alright, but it's because the bill is popular. The entire GOP political strategy, led by Senate Minority Leader Mitch McConnell, is to block popular bills, and then run against Democrats for not getting anything done. If that means Republicans screwing over their own constituents, so be it.

The real story of the infrastructure bill is not, it turns out, one of a country divided against itself. It's a story about how unpopular the Republican agenda is. It's why the GOP has increasingly focused its resources on preventing Americans, especially people of color, from even having a chance to register their opinions at the ballot box. And it shows why right wing media so desperately clings to B.S. stories like the fake controversy over Potato Head's gender or absurd claims that Dr. Seuss is being "cancelled." Republicans need to keep the diminishing number of voters they do have distracted by culture war nonsense, no matter how fake it is, so those Americans don't notice that Democrats keep trying to do stuff those voters like.

"[C]ulture war filler narratives intended to excite and outrage right-wing audiences are taking up an increasingly large amount of airtime," Parker Molloy writes in an analysis at Media Matters, pointing to how, on Fox News, manufactured controversies over children's books and toys crowded out coverage of Biden's coronavirus relief package, which is also broadly popular.

"Unable or unwilling to adjust its actual policy positions to fall more in line with public opinion, the Republican Party has instead opted to play to its base's sense of grievance and victimhood," Molloy concludes.

Republicans are facing a conundrum, however. Many of them are beginning to question whether it was the right call to use the strategy of ignoring the Biden's last big bill, the American Rescue Plan, and distracting their voters with bright and shiny objects like the gender identity of toys. It might have kept the base riled up, but it did nothing to stop the bill, which is likely going to be a big boost to Biden's re-election prospects.

So they're trying something else with the infrastructure plan: Lying about it wildly, and trying to turn it into a culture war issue of the Potato Head/Seuss variety.

Senate Minority Leader Mitch McConnell kicked off this strategy Wednesday, arguing that the bill is not really an infrastructure bill at all, but a "Trojan horse" for some secret progressive agenda, and falsely claiming that the bill "would spend more money just on electric cars than on America's roads, bridges, ports, airports, and waterways."

In reality, the $621 billion earmarked for roads and bridges is the biggest part of the bill and is three and a half times more money than the $174 billion geared towards moving more Americans to electric cars. In addition, the bill has $100 billion to expand broadband internet to rural areas, a longstanding issue in McConnell's state, and another $100 billion to modernize the nation's electrical grid, something that the recent weather crisis in Texas highlighted as an overdue need. Plus, there's $213 billion to improve building infrastructure, including schools and veteran's hospitals.

In other words, it's a bunch of stuff that would really benefit red Americans as much as blue Americans. But it's quickly becoming clear that Republicans are going to adopt a strategy of hand-waving facts away in favor of freaking out about the environmentalist provisions, as if weatherizing buildings to make them more energy efficient is a direct assault on American manhood itself. In other words, they're going to try to turn this into the kind of culture war issue that gets their base going.

Sean Hannity rolled out this strategy for covering the infrastructure bill Wednesday night, when he took a potshot at the $80 billion "marked as a handout to Amtrak." That's only a small fraction of the bill — and a necessary one, since Amtrak is crucial to the densest parts of America. Still, right wing media has spent decades training their audience to hate and fear trains and other forms of public transportation as exotic forms of transportation for the "coastal elite." It might not be as exciting to Hannity's audience as Potato Head — or as the viciously racist propaganda against undocumented immigrant schoolkids he pivoted to during the same episode — but it gives his viewers a reason to believe this bill is "liberal" instead of an investment meant to help all Americans.

As E.J. Dionne at the Washington Post writes, Biden's plans are oriented around the idea that "active government can foster economic growth, spread wealth to those now left out, and underwrite research and investment to produce a cleaner environment and a more competitive tech sector," but come "wrapped in a big but thoroughly traditional government spending program that offers a lot of things to a lot of constituencies." Including, importantly, voters in rural and suburban areas who have also suffered from decades of neglect under Republican leadership.

Roads are popular. Schools are popular. Broadband internet is really popular. People want these things and Republican want to continue denying the public even the most basic of government services. Right wing media's singular goal will be to distract their audiences from these basic facts. They would rather talk about anything but their party's own policies, which even their own voters would realize stink — if they ever turned off conservative media long enough to hear about it.