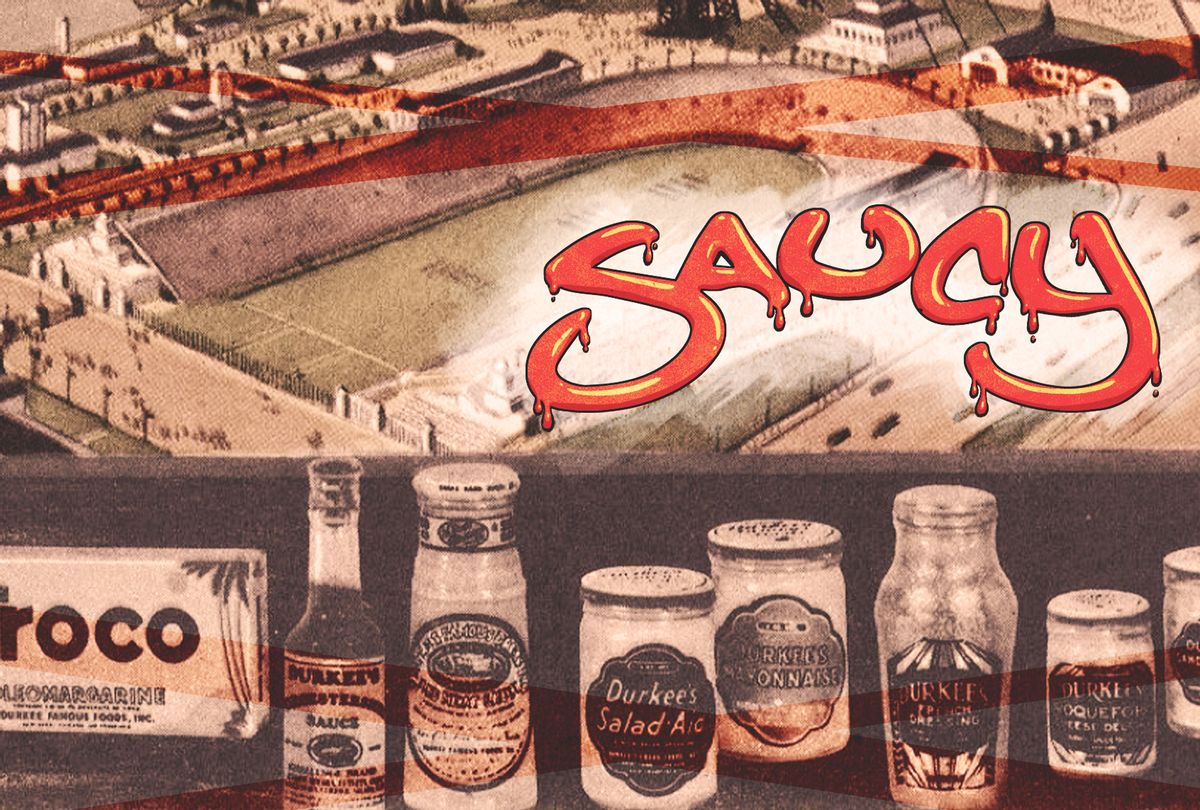 What is Durkee Famous Sauce?

It's a mustard-mayonnaise hybrid that's cut with a punch of vinegar and a "secret formula" of 12 undisclosed spices.

At the Century of Progress International Exposition, also known as the 1933 Chicago World's Fair, Durkee Famous Foods set up a booth for visitors to try their wares: Durkee's Roquefort Delight, Salad Aid and their "Dinner Bell Oleomargarine." Their stand-out product was, and remains, their Famous Dressing and Meat Sauce, which — according to an pamphlet from the fair — was made from a "secret formula [which uses] vinegar, in which twelve different spices have been steeped for six months."

This vinegar is then combined with eggs and other ingredients "to complete one of the most fascinating dressings ever produced." Men, an earlier advertorial pamphlet said, are especially fond of the tangy flavor.

Durkee's Famous Dressing and Meat Sauce (now known as Durkee Famous Sauce) was originally created by Eugene R. Durkee, the founder of E.R. Durkee & Co. Spice Dealers in Buffalo, NY, in 1857. By 1917, the company had built a four-story industrial structure in Elmhurst, Queens, to serve as their new mustard and spice factory. The news was initially met with opposition from the community, as they wanted to preserve the residential feel of the neighborhood, according to the New York Historic District Council.

As a way to mitigate the negative reception, the company announced that the factory would be surrounded by lawns and flower beds and "would be a boon to the community." Durkee became the largest factory and employer in Elmhurst with more than 300 employees, mostly women. When Durkee eventually died in 1926, he left everything to his daughters.

Advertisements in the years after the World's Fair positioned the Famous Sauce as a way for housewives to bring an element of class to their dinner tables, especially if their husbands were jet-setting businessmen.

"Durkee's Famous Dressing and Meat Sauce is served in the lunches of the Three-Mile-a-Minute planes of the United Air Lines, on the giant air-ships of the American Airways, and many others," one ad said. "It's a regular part of the menu of the diners of the finest crack trains; in the dining rooms of the most fashionable hotels, in world-famous restaurants and exclusive clubs from coast to coast and border to border."

In the ensuing decades, Durkee underwent some changes. It had a flurry of owners and is now based in Iowa. Many of its products, like its sandwich relish and its version of Worcestershire sauce, faded through the generations. I've yet to have a flight attendant offer me a spoonful of Durkee Special Sauce with my bagged pretzels.

However, I first had it on a pastrami sandwich with swiss on toasted rye at a nondescript Chicago diner a few years back. It had the creaminess of mayonnaise that was immediately cut by the spice of mustard and some vinegary acid. Court Street Grocers in Brooklyn used it as a sandwich spread, too, on their Turkey + Durkee sandwich, according to the Huffington Post.

Depending on where you live, it can be tough to find on supermarket shelves, but it has die-hard fans across the country, especially on the East Coast and at certain points in the midwest. (St. Louis is particularly devoted.) As Eric Finkelstein from Court Street Grocers told Bon Appetit, "People from all over the country have a connection to this product, and for whatever reason, all think it's from their hometown."

Typically here at Saucy, I'll recommend some at-home dupes of condiments, but Durkee is one of those condiments you're really just going to have to buy and try for yourself. (A generous jar is available for just $8 online).

Once you get it, you've got to try one of my current favorite sandwiches, which is actually inspired by a serving suggestion from one of those vintage company pamphlets. They recommend putting out a "Casino Supper" for parties, in which smoked tongue and corned beef is served alongside the sauce and garnishes of radish, parsley and watercress.

Smoked tongue is maybe a stretch for some, but I ardently believe that thinly sliced radishes are a terribly underrated sandwich topping, so I created the "Casino Supper Sandwich" that subs in thick-sliced roast beef slathered in Durkee's.