This spring, it's time for an herby, citrusy Green Goddess renaissance 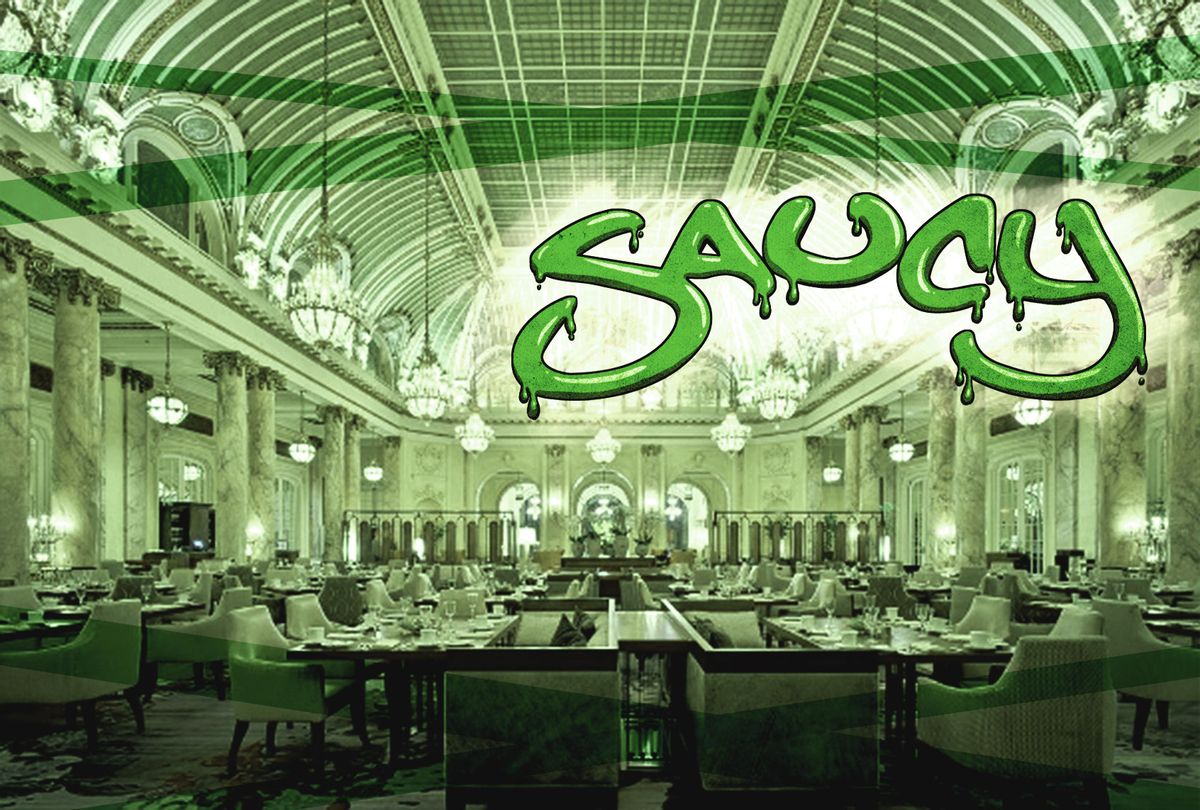 What is Green Goddess dressing?

It's a creamy and pungent salad dressing — that's increasingly being used as a spread and condiment for dipping — traditionally made with mayonnaise, anchovies, lemon juice, vinegar, scallions and lots of herbs, including tarragon.

It's time for a Green Goddess renaissance

Potentially unpopular opinion: I actually really love the first week after "springing forward" for daylight saving time. Granted, losing an hour of sleep the first morning after is rough — but, God, that extra hour of sunshine? It's worth it.

After the slog that is winter depression, it inevitably sparks some hyper-specific desires: I want to wear a white sundress and drink a gin and tonic (with an extra wedge of lime!) on a patio during golden hour; I want my dog to experience a sun-soaked meet-cute with another dachshund at the park; and I want to buy all the greens and pieces of citrus and figure out ways to use them up while they're still vibrant.

Most cultures have a green sauce, or several. There's zhoug, pesto, salsa verde, green chutney, chimichurri, chermoula — and the list goes on. Moreover, there are some basic commonalities. They're all herb-heavy with a hit of acid or umami, and I love them all equally — especially America's own green sauce, Green Goddess dressing.

For a while, Green Goddess dressing struggled with a cultural perception that it was a relic of another time. It's had surges and dips in popularity over the decades, most recently falling off menus in the late '90s in favor of Ranch dressing, which 40% of Americans cite as their favorite dressing, according to a 2017 study done by the industry group the Association for Dressings and Sauces. Italian dressing comes in second, with a comparatively meager 10% indicating that as their preference; at the time, Green Goddess didn't garner enough votes to make the list.

But for the past several years, the dressing's popularity has started to steadily ascend. This spring is prime for a full-fledged Green Goddess renaissance.

The dressing's invention is attributed to Philip Roemer, who was the head chef at San Francisco's Palace Hotel in the early 1920s. During his tenure in the kitchen, the British actor George Arliss was cast in the  play "The Green Goddess," which eventually toured to California.

While there, Arliss ordered dinner in the hotel's Garden Court dining room, and Roemer made him a dish with a special sauce to commemorate the occasion. According to KQED, "the original recipe was heavy on the mayonnaise and was served on a canned artichoke, considered a luxury in those days." Some food scholars think that Roemer was inspired by a French dish "anguilles au vert," fileted eels in a tarragon-heavy green sauce.

According to Julie Murray, the chef's granddaughter, the original recipe contained anchovies, green onion, minced parsley, minced tarragon, mayonnaise, tarragon vinegar and snipped chives. As you can tell from the ingredient list, it's a pretty pungent sauce — enough so that a 1949 letter about the dressing cautioned, "If it is for ladies only, it might be better to reduce onions quite a bit as men like onions better than ladies do."

So, who exactly is the Green Goddess? Well, in the aforementioned play — which was later adapted into a radio drama, a silent film and eventually a '30s talkie — she is a caricature of a Hindu deity. The play centers on a trio of passengers who are forced to land in the mythical kingdom of Rukh after engine trouble grounds their airplane. Arliss, who was white, played an Indian maharajah, flanked by other white actors in brownface and afros faking stereotypical Indian accents.

It wasn't a good look, but the dressing eventually took on a life where it was more broadly associated with Californian food than the play itself. In 1952, Helen Evans Brown published her "West Coast Cook Book," which pushed regional readers to use local, fresh ingredients, many of which grew in Californians' backyards, like avocados, cherimoyas, figs and loquats. Tucked in the pages of the cookbook was a reprint of the Palace's Green Goddess dressing.

Many credit Brown with laying the foundation for what would become known as California cuisine, a style of regional cooking that's driven by sustainable, healthful ingredients and was pioneered by chefs like Alice Waters, Nancy Silverton and Wolfgang Puck. As a result, her work also served as sort of a connecting thread between the 1950s and 1970s for Green Goddess dressing.

In 1971, Waters opened Chez Panisse, a restaurant that centered on the "immediacy and excitement of vegetables just out of the garden, fruit right off the branch and fish straight out of the sea." Served alongside those was Waters' own version of Green Goddess, which eschewed the mayonnaise base of its predecessor for avocado and a splash of heavy cream — a change that has largely stuck on many menus.

This was also the era during which health food stores— like New Age Natural Foods and Staff of Life — and organic restaurants become entwined with the counterculture movement. Many sold and served Green Goddess and the dressing's name eventually took on a sort of New Age-y, hippie-ish glow, another shift for the dressing that has largely persisted.

During the '80s, there were a few big moves in the world of salad dressings. Ranch dressing really hit its stride, as snack foods like Cool Ranch Doritos appeared on the market, absolutely causing the flavor's popularity to skyrocket. And non-refrigerated bottled dressings increasingly became a grocery store mainstay as Kraft reformulated several of their most popular dressings, Ranch included. This . . . wasn't great from Green Goddess dressing. Many (though not all!) bottled variations are kind of gloomy with a pervading artificial onion odor.

Since then, there have been some attempts at a Green Goddess renaissance. In 1998, food writer Russ Parsons pined for the dressing in a piece for The Los Angeles Times.

"It's as if the best parts of a California spring have been distilled into a rich creamy sauce," he wrote. "Tangy with anchovies and heady with fresh herbs, with an appealing high note of tarragon soaring above it all, Green Goddess is the glue that will hold together any number of composed salads."

He added, "There are also dressings called Green Goddess that don't have tarragon — including one in the current 'Joy of Cooking' — but they are an historical aberration."

Starting in 2018, Green Goddess saw a comeback on hip restaurant menus. Watershed, an Atlanta restaurant that is now closed, created a Brussels Caesar with shaved brussels sprouts, shallots, pistachios, guanciale and Green Goddess, while Butcher & Bee in Nashville drizzled it on their Autumn Green Salad, made with shaved radishes, apples, pistachios and Parmesan.

Its use wasn't just reserved for salads, though. As the Nation's Restaurant News reported, at Girl & the Goat in Chicago, their crispy pork shank special was finished with stone-fruit kimchi and Green Goddess, then served with a side of naan. At Decca, one of my favorite restaurants in Louisville, you can order a plate of shoestring fries with a little cup of homemade Green Goddess for dipping.

It's popular enough that the dressing has since been incorporated into dishes at fast-casual and fast-food chains, including Panera, Sweetgreen and Subway. Maybe it's time to find a home for it in your spring kitchen, as well?

How should I use Green Goddess at home?

Like many green sauces, Green Goddess is incredibly versatile. It's creamy, verdant and has an acidic bite which makes it stand up really well to hearty vegetables without being overpowering. I love using it to sort of bridge my cold weather and warm weather eating habits; it's like a stepping stone from all-braised everything to crisp, herby salads.

As such, I'm really digging hearty sandwiches, stacked high with roasted vegetables, a little cheese, some greens and slathered with a good Green Goddess spread. A note: If you're using an avocado-based Green Goddess, feel free to skip the sliced avocado. (Or keep it, because the more the better!)

1. Place the eggplant, sweet potato and red bell pepper slices on a prepared baking sheet. Drizzle them with 2 tablespoons of olive oil and sprinkle with salt, pepper and dried red pepper flakes to taste. Roast at 400 degrees for 30 minutes, flipping once midway through. Remove from the oven, and allow to cool slightly.

2. Meanwhile, gently rip the lettuce leaves into bite-sized pieces, and combine them in a large bowl with the microgreens or sprouts. Drizzle with the remaining lemon juice and olive oil, and season with salt and pepper. Stir until thoroughly coated.

3. To assemble the sandwich, spread 1 tablespoon of Green Goddess dressing and half the mashed avocado on a slice of toasted bread. Next, add a slice of cheese. Follow with the bell pepper, eggplant slices and sweet potato. Then add the dressed greens mixture. Spread another tablespoon of Green Goddess dressing on the second piece of bread, then top off the sandwich.

4. Repeat with the second sandwich. Go eat them in the sunshine! Seriously!

There are a couple of great Green Goddess dressing recipes floating around online. I tend to stick with those inspired by Alice Waters' recipe (i.e. the ones that use avocados), simply because I always have an avocado or two that I need to use up.

In 2010, SFGate published the original Palace Hotel version, which was revived that year by Tyler Florence, who was the chef/owner of San Francisco's Wayfare Tavern at the time.

Again, bottled Green Goddess isn't always stellar. Instead, keep an eye out for refrigerated versions at your grocery store. Trader Joe's Green Goddess Dressing, which is tahini-based and slightly nutty, is actually really delicious and affordable. For grilling season, I'd also recommend Williams Sonoma Green Goddess Rub. Inspired by the classic dressing, it's a seasoning packed with dried onions, spinach and lemons, highlighted by chives, tarragon, basil and other herbs.