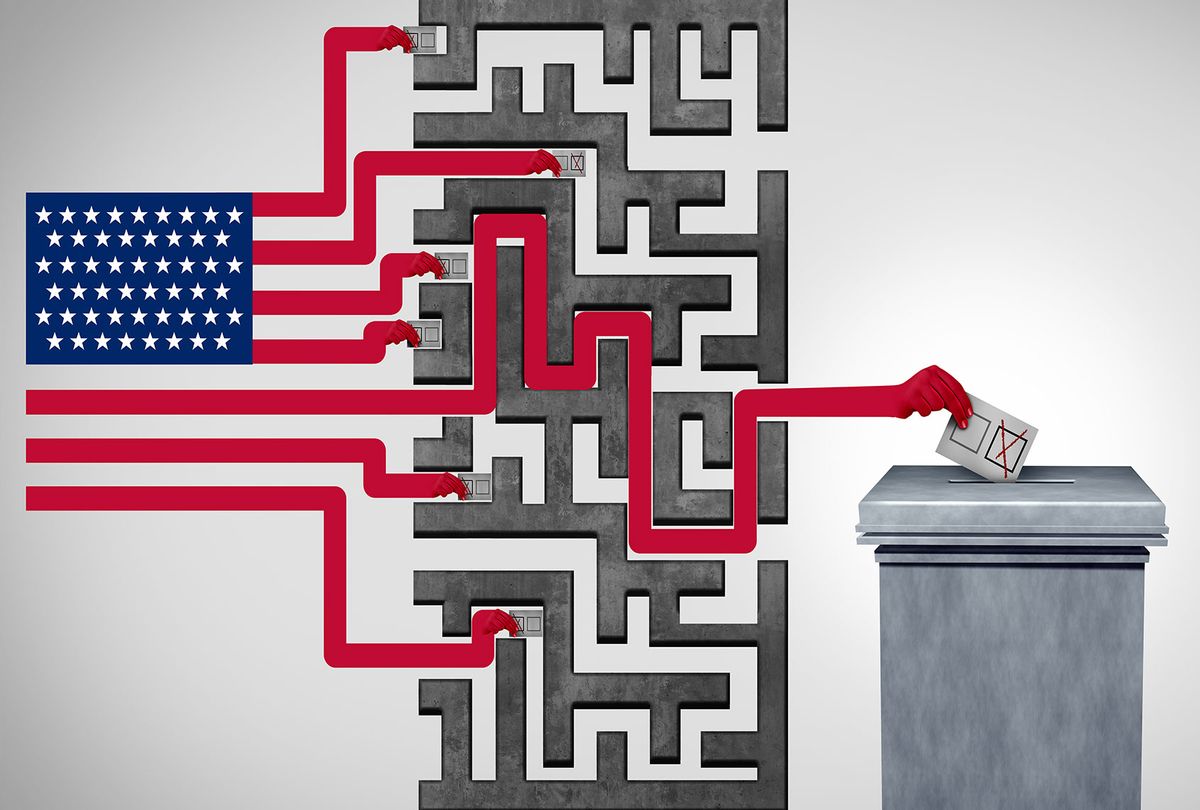 Donald Trump's neofascist slogan, "Make America Great Again," was always best understood as a threat against nonwhite people, women, the LGBTQI community and others for whom "the good old days" were in many ways not very good at all.

Although Trump may no longer be president, the Republican Party and his followers are still continuing with his crusade.

Because Republicans understand they cannot free win free and fair elections, their party — and the larger white right — is simply trying to stop Black and brown people from voting in Georgia (and soon in many other states as well). This Jim Crow-style campaign is part of a nationwide strategy by the Republican Party and its agents to keep those Americans who support the Democratic Party from being able to exercise their constitutionally-guaranteed right to vote.

Today's Jim Crow Republicans have mated white supremacy and neofascism, in search of creating something like Russian autocrat Vladimir Putin's "managed democracy." The result is a horrible mixture of right-wing racial authoritarianism and anti-democratic fervor. In their attempt to create a new type of American apartheid, the Republicans and their agents are willing to use all means available, legal, quasi-legal or illegal.

As revealed Thursday by Common Cause Texas, the Republican Party in Harris County — which contains Houston and is the third most-populous county in the nation — is planning to organize what is described as an "Election Integrity Brigade" of thousands of pro-GOP election workers and poll watchers. This group of Republican operatives will be sent into predominantly Black and brown communities to engage in de facto acts of voter intimidation and harassment under the pretext of stopping "voter fraud."

This "Election Integrity Brigade" will be a permanent group, not just a list of volunteers called out during election season. As explained by the Republican official who conducted the briefing obtained by Common Cause Texas, the goal is to also recruit poll watchers and other volunteers through "military partnerships." Such a plan is especially troubling given Donald Trump's coup attempt and his followers' attack on the Capitol on Jan. 6 and the prominent role played by retired or active members of the military and law enforcement.

In an evident nod to racist fears and bigotry, Harris County Republican leaders explains that these poll watchers must have "courage" and "confidence" to do such work in Houston's Black and Latino communities.

Harris County GOP Chair Cindy Siegel confirmed in a statement to NBC News that the program aims to recruit "an army of volunteers" throughout the county as a way "to engage voters for the whole ballot, top to bottom, and ensure every legal vote is counted." Siegel also called Common Cause "a radical leftist group that is blatantly mischaracterizing a grassroots election worker recruitment video in a shameful effort to bully and intimidate Republicans."

The Harris County Republican Party's intimidation campaign is literally transcribed from the Jim Crow reign of terror, when white people in Southern states would physically prevent Black people from voting. Many of the white people who enforced these racist Jim Crow rules or regulations were armed, and even if they did not have weapons on their person at that moment, the threat of violence was omnipresent.

Once permission has been granted for these assaults on Black and brown peoples' freedom and dignity — as it was by the Age of Trump — they will only escalate in boldness, frequency and, inevitably, violence.

Of course the professional "serious people" in the mainstream news media and professional commentariat have spent recent weeks trying to talk down the concern that the Jim Crow Republicans are literally trying to take away Black peoples' right to vote.

At many of America's leading news outlets, such voices have criticized President Biden for his "tone," because he said that Republicans were engaging in "Jim Crow on steroids" in Georgia and elsewhere. Other members of the "church of the savvy" and adherents of the "view from nowhere" have also tried to litigate and parse whether the Georgia anti-democracy bill really bans giving food or water to voters in line food and water (it does), or tried to argue for reasonable interpretations of the law that leaves Republicans looking less blatantly racist. (Spoiler: Today's Republicans are in fact blatantly racist.)

President Biden has contributed to the confusion by describing Georgia's vote suppression as akin to, or even worse than, Jim Crow. Contrary to the president's hyperbole, it is more like Jim Crow Lite than "Jim Crow on steroids."

Of course, the Jim Crow Republicans and their mouthpieces took to cable news and other media outlets to play the victim, bemoan "cancel culture" and deny the obvious racism and white supremacy driving their campaign to stop Black and brown people and other likely Democratic supporters from voting, a campaign that now spans 47 states and more than 350 proposed laws.

One of the most perverse claims made in defense of the Jim Crow Republican attacks on voting rights in Georgia is that turnout in Georgia and elsewhere has actually increased after barriers to vote were enacted by Republican governors and legislatures. This is like saying that if you can run faster when being chased by an ax-wielding serial killer, then he's doing you a favor.

Those public voices who are trying to downplay the dangers to democracy represented by the Jim Crow Republican Party are, in the worst case, enablers of such civic evil. In the "best worst-case scenario," those voices are offering analyses from their own myopic perch of privilege (most often the position of being white, male and affluent). They have the luxury of imagining themselves detached from "emotions," and have convinced themselves that white supremacy is controlled by a dial that can be carefully calibrated. In reality, it is more like an old, frayed but powerful electrical switch that frequently sparks, shocks whoever is touching it and possesses the potential to blow out the electricity in the entire building — or start a fire that destroys the neighborhood.

I offer a thought experiment. What if Black and brown people who support the Democratic Party started going into majority-white suburban neighborhoods where many people vote Republican, and acted as poll watchers who were trying to stop voter fraud? Given that there is much more reason to monitor Republicans for efforts to undermine, steal or nullify elections, there might actually be a legitimate need for such vigilance in white neighborhoods.

But how would white people react to that idea? Moreover, what if the Democrats were to take power across the country on the state and local level and then impose the same kinds of limitations, in an obvious attempt to interfere with conservative white people's right to vote? What do you suppose would happen then? At the barest minimum, many of the same voices now trying to minimize the danger represented by the Jim Crow Republicans' attack on voting rights would howl in outrage.