Is there a scientific case for literature? A neuroscientist novelist argues yes

Illogical as it might seem, there may be an evolutionary reason that humans love consuming fiction 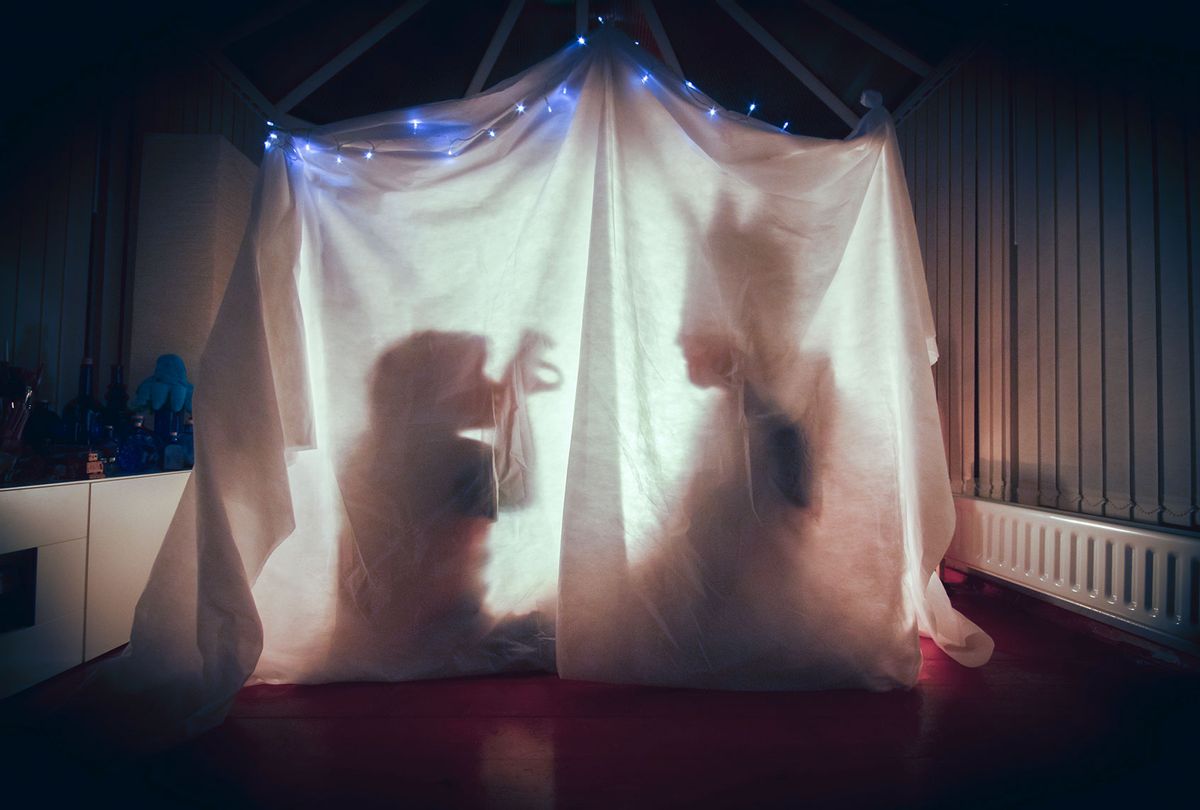 You do something strange every day. You consume fictions. It's such an omnipresent habit, shared by all, that we rarely consider the oddity of it. I'm a fiction writer myself, but I'm also a neuroscientist, so this activity fascinates me. What's the cognitive utility of learning things that aren't true? We're evolved biological beings who need to understand the world to survive, and yet all facts we learn about Hogwarts are literally false. How can any of this information be useful?

Still, fictions surround us. I grew up in my mother's independent bookstore and I've been a writer since I can remember. A significant change in my lifetime is that media, like TV channels, books, magazines, and films, have been condensed into a single one-stop shop: the screen. I call this the supersensorium. Screens are now supermarkets for entertaining experiences. Such easy access to fictions means we often binge watch, we stuff our faces. The average American adult spends about half their day consuming screen media.

The situation is not helped by the fact that talk of an objective aesthetic spectrum has become verboten. For decades the dominant intellectual view has been that elitist notions of art should be deconstructed. The view originates with Pierre Bourdieu, who in his 1974 book "Distinction" argued "highbrow art" is merely the elite signaling their class difference. If you think this is a fringe opinion, please try raising your hand in the average college classroom and vigorously defending that some things are good art, and worthy of attention, and some things are not. Martin Scorseses' lament that Marvel movies are not art drew swift opprobrium. Pierre Bourdieu is the second most-cited scholar of all time. The first is Michel Foucault.

This dismissal of an objective aesthetic spectrum means we lack any natural immunity to the ever-improving technological supersensorium. How we consume media is not an academic exercise. It can be life or death in a very real way. There is a serious possibility that as a culture we will disappear up our brainstem without a separation between art and shlock. At minimum, an unchecked supersensorium leads to economic stagnation, psychological depression, and robs from both people and populations. Who among us does it not touch? There are people who destroy their lives with computer games as surely as if they were mainlining heroin.

Just like with our modern abundance of food, the solution is not to cut consumption but to replace it, to swap out cookies for kale. The solution to the modern supersensorium is not to swear off fictions, it is to offer concrete reasons to actually believe in an aesthetic spectrum. Reasons to attend to art.

But what could such an objective justification of art and fictions be? I offer that there is a hint buried deep in our biology. Evolution itself selected for fictions far before humans arrived on the scene. Millions of years ago animals began to dream. Mammalian brains come with a natural storyteller built in, the originator of your dog's soft-throated whine, your kitten's clutching paws. The same question emerges: why would evolution select for the creation of an inner fabulist to spin your own "1,001 Arabian Nights"?

A possible answer comes from artificial neural networks, which face a ubiquitous issue during learning: they can overfit to a particular data set. In overfitting the network learns too well, that is, it pays too much attention to the particular quirks of what it's learning and creates stereotypes, assumptions, and biases. Solutions to overfitting in deep learning are often based on adding random noise to data. For example, the problem of overfitting can be solved by adding in sparse data (dropout) or hallucinatory data (domain randomization) as the network is learning.

It's notable that consciousness in dreams is structured a certain way. Dreams are sparse. Text is impossible to read in a dream, cellphones useless — the dream world is low resolution. Dreams are also hallucinatory, containing category-breaking elements and odd time shifts. I think it's likely that in the daily life of animals they are under-sampling their environment, which makes their brains susceptible to overfitting. The brain can't finesse its learning during the day, because injecting noise during waking life might cause an organism to jump off a cliff. So it does it when the body is asleep.

This is called the Overfitted Brain Hypothesis. It posits that the daily overfitting faced by smart learners like ourselves and other mammals is combatted by dreams. Thus it is precisely the randomness and weirdness of dreams, their disconnect from waking life, that gives them their purpose. The low-resolution fabulism of dreams is not a bug, but a feature.

The Overfitted Brain Hypothesis may explain more than just the function of dreams. After all, what are fictions but artificial dreams? Perhaps time spent reading novels, or watching TV, is not actually time off from learning, but rather a kind of post-hoc adjustment of our mental models.

How can we justify an objective aesthetic spectrum from the Overfitted Brain Hypothesis? It can at least tell us what art isn't. Some fictions not only fail to combat overfitting, but actively contribute to it. When plots are stereotyped, when characters become caricatures, when artificiality and predictability rear their heads, that's when our aesthetic impulse tells us something is bad, and that also seems to be when a fiction is furthest from doing its job.

While this idea is obviously speculative, it's undeniable that we humans don't stop learning when the TV powers on. So it's not much of a leap to say that at the bottom of the aesthetic spectrum are fictions that make your model of the world simpler. More constrained, more fitted to the obvious — such things do nobody any cognitive favors. And this just happens to synch up nicely with widely-held notions of aesthetics. It provides a much needed scientifically-based justification of an objective aversion for works at the bottom of the aesthetic spectrum, seeing them as "mind candy" consisting of empty calories.

"Arrêter!" Pierre Bourdieu might yell from beyond the grave. It's still the case that upper classes distinguish themselves via "elite activities," like difficult novel reading, while TV watching is relegated to the lower class. First, such distinctions are rarely espoused anymore. But second, there are objective differences between media. Of course art is possible in any medium. Yet there are biases or abilities that different media exhibit that give them advantages for certain types of stories. In the case of literature, the novel's inimitable power is its close connection to human consciousness.

In the real world, the contents of another's consciousness are inferable only from their actions — encased behind bone, minds are invisible, and humans are forced to live looking at the "extrinsic perspective" of the world. However, characters in a novel can be splayed open, minds made viewable, in a way that is metaphysically impossible for a real person, or even a TV character. By taking the "intrinsic perspective" on the world, novels can refer to conscious experiences as directly as they can refer to physical events.

Any novelist worth their ink knows this implicitly. Writers in other media know it too. There's a reason why the best TV shows or computer games try hard to get inside the minds of their characters, a feat novels accomplish so effortlessly. For example, in the consensus king of "Golden Age" TV shows, "The Sopranos," episodes are often based around therapy sessions to compensate for the fact that we are looking at Tony Soprano from the extrinsic perspective. The most artful computer games, like "Planescape: Torment" or "Disco Elysium," are so good precisely because their text-based nature allows them to take the intrinsic perspective. Novels are the best medium for showing what it is like to be someone, and therefore technologically irreplaceable. And yes, this probably means they are on average higher on the aesthetic spectrum, for what is a more important subject than human interiority?

It's not a coincidence my own novel, "The Revelations," out this month, takes place in the world of scientific research into consciousness. By following the murder of a neuroscientist, the writer side of myself got to show off what it is like to be a scientist. And I got to ask questions like: can a scientific theory of consciousness tell us what it is like to be someone? Or can only novels do that? The Overfitted Brain Hypothesis was also in the back of mind while writing the book. So while "The Revelations" contains aspects of genres like murder mystery, romance, and Lovecraftian horror, I was always trying to create chromatic variations that also broke free from them.

Of course, like any artist I can't step outside myself to ultimately say if the product is any good. It's impossible to scientifically design art from the top-down, and in the end the scientist in me had to fade off stage entirely. But I can at least say "The Revelations" won't contribute to any overfitting. I don't feel like I added just another icon to the supersensorium. And maybe that's what we writers should strive for. Maybe that's enough.

Erik Hoel received his PhD in neuroscience from the University of Wisconsin-Madison. He is a research assistant professor at Tufts University and was previously a postdoctoral researcher at Columbia University in the NeuroTechnology Center and a visiting scholar at the Institute for Advanced Study in Princeton. Hoel is a 2018 Forbes “30 Under 30” for his neuroscientific research on consciousness and a Center for Fiction NYC Emerging Writer Fellow. "The Revelations" is his debut novel. He lives on Cape Cod in Massachusetts.