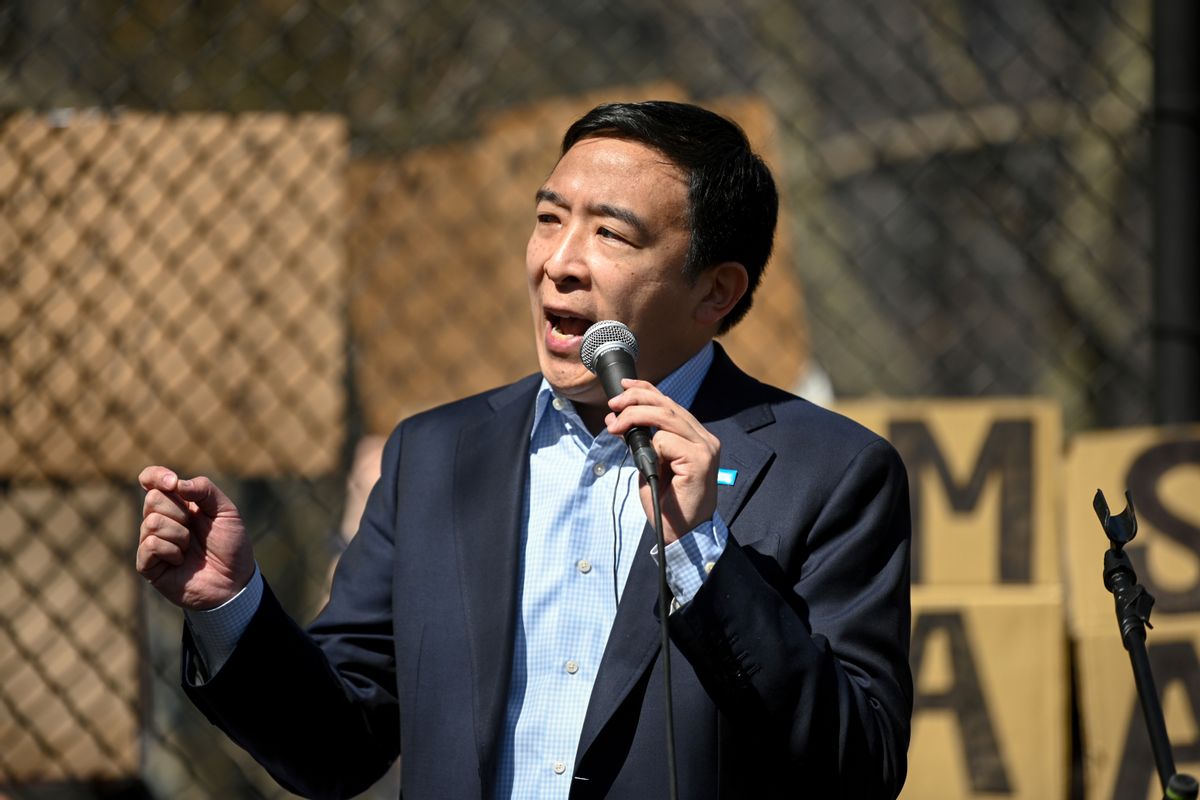 New York mayoral candidate Andrew Yang had a rough day on the campaign trail Wednesday, losing out on a key endorsement from a leading LGBTQ group after an ill-received speech in which he reportedly talked about his excitement at the prospect of visiting a popular Manhattan lesbian bar and repeatedly mentioned his "gay staffers."

The former Democratic presidential candidate's remarks drew immediate criticism from attendees of The Stonewall Democratic Club of NYC's event, including one member who told The New York Times that Yang had committed "Michael Scott levels of cringe and insensitivity," a reference to Steve Carell's often-problematic character on "The Office."

"It either tells me Andrew Yang is in over his head or is not listening to his staff," Alejandra Caraballo, an an out trans attorney and former New York City Council candidate told the newspaper. "Those are both radioactive flashing signs that say he is not prepared to be mayor of New York."

Rose Christ, the Stonewall Club's president, told The Times that Yang had failed to mention "substantive issues that our membership cares about" and instead chosen to focus on bars and parades.

According to Gay City News, a New York-based publication covering the city's LGBTQ community, it only got worse from there. Yang went on to refer to LGBTQ New Yorkers as a "secret weapon" that the Democratic Party appeared to be misusing.

"It's like we should win everything because we have you all," he said, while reportedly laughing, "given that you all are frankly in leadership roles all over the Democratic Party."

Another point of contention arose after Yang spoke about his desire to see in-person Pride festivities in 2021, in spirte of the fact that the Reclaim Pride Coalition already has plans to host an in-person march — its third straight year hosting the event, according to Gay City News. The Queer Liberation March is the annual people's protest march, which rejects floats or funding from corporations and police involvement.

The Stonewall Club ultimately gave its endorsement to Scott Stringer, the city comptroller, who has also landed endorsements from several other prominent LGBTQ groups.

Stringer penned a Thursday tweet thanking the organization for its support, writing, "I'm so honored to receive your endorsement, @SDNYC! We've been in the trenches together for decades to advance equality for all New Yorkers — now let's continue the fight for LGBTQ+ New Yorkers and work to build a city for everyone."

Notably, 26% of respondents said they "don't know" who their first choice would be.