"Trial of the Chicago 7": A flawed film — but highly relevant to America in 2021

Aaron Sorkin's drama set in the tumult of the late '60s is terrific entertainment — as history, it only gets a B 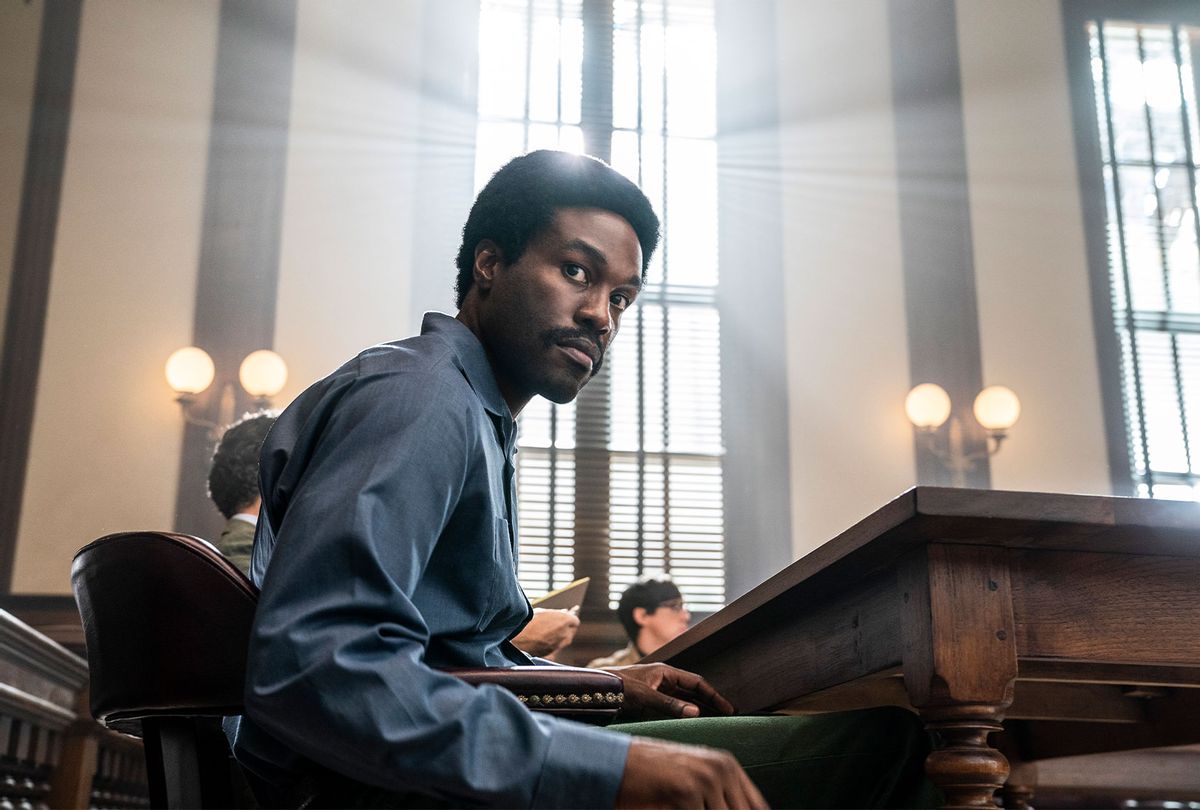 I haven't seen most of the movies nominated for best picture in this year's Oscars, so I can't say that "The Trial of the Chicago 7" deserves to win.

What I can say is that, despite its many inaccuracies, everyone who identifies as a progressive, liberal or leftist should see Aaron Sorkin's film about the tumultuous political year of 1968. It might be the ultimate movie about how to fight the far right — an artistic testament to pragmatism and a cry of rage in the era of Donald Trump and Derek Chauvin. Even if "The Trial of the Chicago 7" doesn't take home best picture (or any of the other five Oscars for which it's been nominated, it still makes required viewing for people who care about social justice issues.

To understand why, a little historical background is required.

Although the trial itself occurred from 1969 to 1970, its roots can be traced to the 1968 presidential election. President Lyndon Johnson backed out of running for another term after barely winning the New Hampshire primary and anointed Vice President Hubert Humphrey as his heir apparent. While Humphrey had risen to power as a dedicated and effective liberal — particularly on issues like civil rights — much of the left hated him because he supported Johnson's unpopular expansion of the Vietnam War. Humphrey likely wouldn't have won the nomination at all had Sen. Robert Kennedy not been assassinated in June, and by the time of the Democratic National Convention that summer in Chicago, anti-war protesters like Abbie Hoffman, Jerry Rubin, Tom Hayden and David Dellinger had plans to converge on the city and protest his candidacy.

They didn't care whether their protests might help Humphrey's Republican opponent, Richard Nixon (who won, of course). Their objective was to demonstrate that millions of Americans were fed up with the war and wanted it to end. Yet when they encountered the Chicago police, a riot broke out, with the anti-war coalition accused of inciting it. "The Trial of the Chicago 7" tells the story of this "political trial," so dubbed because it was clear to any marginally perceptive observer at the time that the protesters were being railroaded.

This is not a perfect representation of those events. The movie is riddled with historical inaccuracies, a fact that writer-director Sorkin does not deny. Frank Kusch, a historian who teaches at the University of Saskatchewan and wrote "Battleground Chicago: The Police and the 1968 Democratic National Convention," told Salon by email that the movie mischaracterized Hoffman "as a thoughtful, balanced, insightful pragmatist, who quotes scripture from the witness box, instead of the radical prognosticator of absurdity and irony, a colorful manifester of cultural and generational outrage." Sorkin concocts subplots about Rubin which never happened, such as him being seduced by a female undercover cop and rescuing a fellow protester from a sexual assault. Hayden is characterized "as a fuzzy, image-protecting, cautious, centrist liberal" right up until the very end, which is flat-out untrue, and the staunchly pacifistic Dellinger is shown punching a court officer in the face, which was utterly inconceivable.

Even when the film has an opportunity to use real life for searing social commentary, it often falls short. One of the most infamous aspects of the Chicago Seven trial was the mistreatment of Bobby Seale, national chairman of the Black Panther Party (played here by Yahya Abdul-Mateen II). Seale had originally been lumped in with the seven anti-war protesters, causing them to be known as the Chicago Eight, even though he had no role in planning the anti-war demonstrations and had merely arrived in the city to speak as a last-minute replacement for Eldridge Cleaver.

When Seale's lawyer could not attend because he was recovering from surgery and the judge refused to either delay the trial or let Seale represent himself, Seale began to speak out against the judge's blatant violation of his rights, accusing him of racism. The judge eventually retaliated by having Seale bound, gagged and chained to a chair, with the muffled Black Panther leader desperately trying to sleep. This eventually led to a mistrial in Seale's case which was severed from the other seven defendants and finally dropped entirely.

While these events are depicted in the movie, they only show Seale bound and gagged briefly period before a mistrial is called. "In reality, he was left in this condition for three days in court before his dramatic removal and carried from the courtroom while those in attendance yelled his name," Kusch said. "Why this moment that requires no artistic license is absent from the film is perplexing."

Nick Proctor, a historian at Simpson College who wrote the book "Chicago, 1968: Policy and Protest at the Democratic National Convention," also noted that Sorkin chose to set the trial in a traditional, majestic courtroom rather than the uglier one in which it actually took place. This also was a missed artistic opportunity.

"Sorkin decided to depict the courtroom as this 'Law & Order'-style, high-ceiling, wood-paneled majesty of American justice kind of a room," Proctor told Salon. The trial actually took place in a courtroom designed by a modernist architect. "There were no windows. The entire ceiling was fluorescent lighting. Abbie Hoffman's nickname for the room was the 'neon oven.' I think if you had sort of decided to go with historical accuracy for your set dressing, that it would have been more Kafkaesque."

Given all of these inaccuracies (and many others I'm passing over), why do I still recommend the film? There are three reasons:

First, the parallels between the injustices perpetrated against Seale and the Chicago Seven are eerily similar to what still occurs today. African Americans continue to be systematically persecuted by our criminal justice system, with Seale's literal shackling and silencing serving as a powerful visual metaphor. The criminal justice system is also unduly harsh on left-wing protests, with efforts to criminalize them continuing to gather steam, even as right-wing protesters like the Jan. 6 insurrectionists are handled with kid gloves. Supporters of Black Lives Matter, antifa and other left-wing protest movements must constantly forced to defend themselves from accusations of extremism and violence, while the Trump movement is depicted as relatively normal by contrast, just as Chicago Mayor Richard Daley's all-out police assault against left-wing protesters was rarely viewed as thuggish.

Then as now, the enforcers of the law itself — the police — often sympathize with the right and despise the left. White supremacists have infiltrated much of law enforcement today, posing a serious national security threat. In 1968, police often favored the racist third-party candidate, Alabama Gov. George Wallace. This movie, in its own way, helps illustrate those points about both past and present.

Sorkin's film also raises a provocative question about the proper role of left-wing movements in the American political process. I honestly wish this subject were more central to the film, but it's important. When must leftists and progressives bite the bullet and vote for an unsatisfying "moderate" Democrat. in the name of preventing Republicans from being elected? Or to look at it another way, when must the left take a stand and demand that Democrats listen to them or lose their support?

There's no question that left opposition to Humphrey's drained support from his campaign, culminating in the "police riot" at the Chicago convention the police riot at his convention, and all the turmoil in and around the Democratic Party helped Nixon win the 1968 election. It's a tricky subject to judge morally and strategically, even with 20/20 hindsight. On the one hand, Humphrey's support for the catastrophic Vietnam War led to countless of Vietnamese deaths, in addition to a constantly growing American body count. While Humphrey adjusted his war policy late in the campaign, he never backed away from it entirely. For opponents of the war, with Kennedy dead and Sen. Eugene McCarthy opposed by party insiders, voting for Humphrey was too bitter a pill to swallow.

"Myself and others in SDS [the antiwar group Students for a Democratic Society] went to Chicago to convince the kids in their teens and early 20s who had been campaigning for McCarthy to give up their illusions about getting change within the system," Michael Kazin, a history professor at Georgetown University, told Smithsonian Magazine. "At the time, we were very cynical about the Democrats. We didn't think there was any chance that McCarthy would be nominated. We wanted to give up the illusion of change through the existing electoral system."

At the same time, there were undeniable and important differences between Humphrey and Nixon. Humphrey was an intellectually versatile man, a policy wonk with a strong legislative record on civil rights, labor and economic justice issues. As president he hoped to continue Johnson's successful Great Society and War on Poverty programs. He could well have been a highly successful leader who continued and consolidated the Democratic Party's control of national politics that had begun under Franklin Roosevelt in 1932.

Nixon, by contrast, was a standard center-right Republican, a corporatist who put the business community first, even if he was nowhere near as right-wing as successors like President Ronald Reagan. Nixon also sharply curtailed legal progress in the civil rights movement, another step toward the right on a crucial issue. The difference between Humphrey and Nixon on the Vietnam War was almost meaningless, but I'd be hard pressed to argue that America wouldn't have been better off if Humphrey had won.

We are still plagued with this dilemma. In 2020, enough leftists recognized the threat posed by Donald Trump to help elect Joe Biden despite obvious misgivings, whereas in 2016 a significant subset of progressives couldn't stomach voting for Hillary Clinton. The question boils down to when to pick your battles — and there is no easy answer.

While the feud between Abbie Hoffman (Sacha Baron Cohen) and Tom Hayden (Eddie Redmayne) as depicted in the film isn't accurate, the debate it reflects is the most important one in American politics today. In the movie Hoffman represents the revolutionary side, and Hayden the pragmatic one. Both need each other to succeed, because they face a greater evil, but they struggle to trust each other. It is justifiable to use artistic license to explore these themes, and here it leads to scenes with some of the smartest political dialogue I've ever heard in any history-based film.

This brings me to the third reason I recommend this movie: It's so well-written. This is an example of a work of art where "history comes alive," as the cliché goes. With Sorkin's gripping dialogue and a top-notch cast — also including Jeremy Strong as Jerry Rubin and John Carrol Lynch as David Dellinger — "The Trial of the Chicago 7" is great fun to watch, historical accuracy or no.