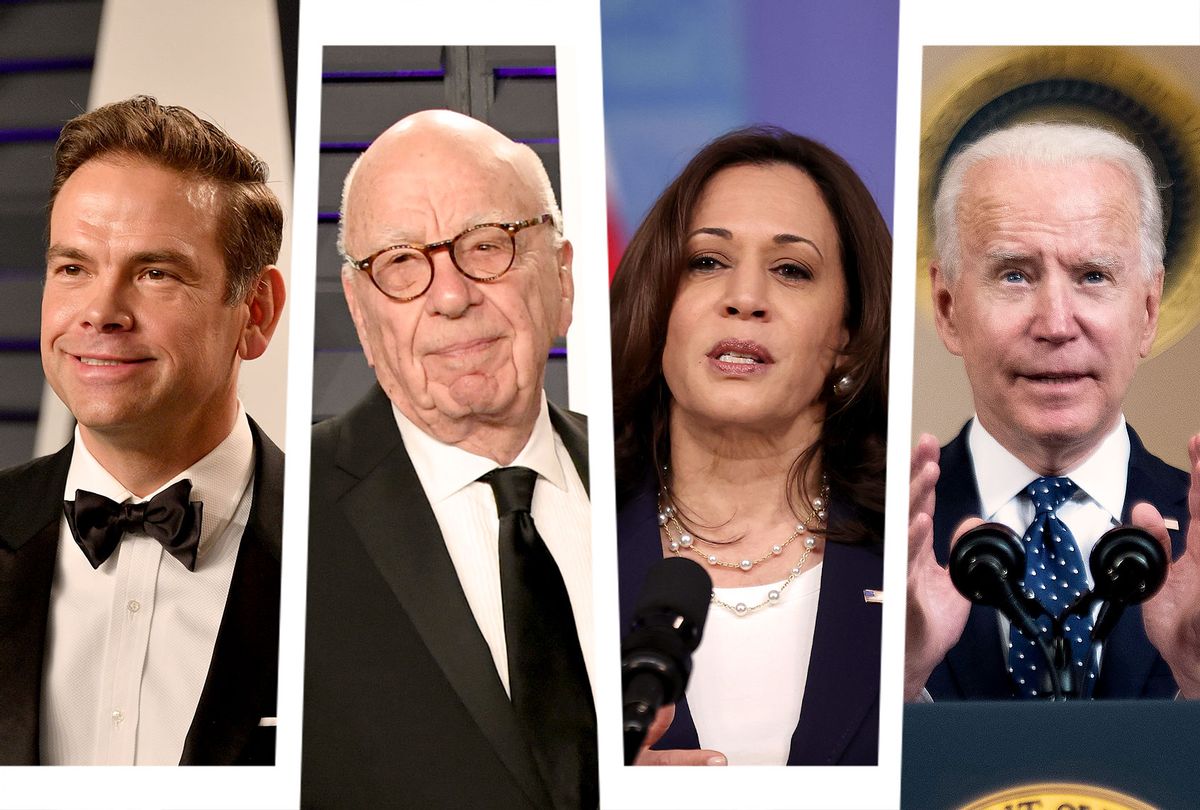 Over the weekend, two sensational fake stories — a Fox Business Network segment about President Joe Biden's supposed plans to impose strict beef rations on Americans and a New York Post news article claiming Vice President Kamala Harris's book was being distributed to migrant children in shelters — spread rapidly through right wing social media after being injected into the bloodstream by outlets owned by Rupert Murdoch and his family. Both stories were eventually corrected — Fox on air, and the Post in two separate, corrected articles — after being debunked by fact-checkers.

In both cases, however, it's highly unlikely that corrections will ever penetrate the consciousness of the average person who shared straight-faced posts referencing these fake stories on Facebook, Instagram, Twitter, or the other social media sites. On the contrary, you'll probably be hearing right wing relatives griping about Harris using her book to indoctrinate migrant children and "jokes" about Biden's burgers for years to come.

There's a popular maxim — ironically, often falsely attributed to figures like Mark Twain or Winston Churchill — that a lie can travel around the world while the truth is still lacing up its boots. In right wing circles, that observation is starting to morph into what looks very much like a strategy.

Tuesday night, Laura Italiano, the New York Post reporter who wrote the original story about Harris, dramatically resigned, claiming on Twitter that she was "ordered to write" the story and that it "was my breaking point." The original story falsely claimed migrant centers are issuing "welcome packs for migrant children" that, along with "basic hygiene supplies and clothing," include copies of "Superheroes Are Everywhere," a picture book Harris co-authored about how teachers and moms and other adults in kids lives are "superheroes."

In reality, there was one copy of the book at one HHS center in California — a donation, not part of any official "welcome pack." (Like many lies that find credulous ears, this one bears a resemblance to a true, yet utterly unrelated to Harris, story: Former Baltimore Mayor Catherine Pugh got caught profiteering off her position with a scheme involving children's book sales.)

Still, as Zachary Petrizzo documents, the false Harris book story tore through right wing media, referenced by figures like Fox News host Tucker Carlson. It also — and perhaps more importantly — ripped through social media. Figures like Dan Bongino and Glenn Beck, who routinely show up on the list of Facebook's most popular posters, amplified the story. Bongino's post on it has more than 12,000 reactions from his fans, with thousands of irate comments about Harris "pawning off" her book to kids.

For weeks now, Carlson has been exploiting the influx of refugees at the southern border to mainstream "replacement theory." It's a white nationalist conspiracy theory that accuses shadowy elites — the neo-Nazis say "Jews," Carlson cleans it up with "Democrats" — of trying to replace the current electorate with new people, "more obedient voters" from the Third World. It's a preposterous accusation — it's well known that most refugees are fleeing violence in Central America, and the Biden administration has actually been criticized for not processing applicants fast enough. Carlson has not only pushed the "replacement theory" lie, he's been publicly defended by Lachlan Murdoch, son of right wing media mogul Rupert Murdoch and CEO of Fox News, after doing so.

This particular fake story about Harris' book — again, published by another Murdoch-owned company, the New York Post — is handy fodder for those amplifying the "replacement theory" narrative. They can suggest it's proof that kids in migrant centers are being indoctrinated by the Biden administration. Carlson, for his part, did not simply repeat the fake Harris story as printed but did connect the book donation — his question: "How many copies exactly?" — to a rant about the U.S. resembling "North Korea" and the suggestion that maybe it's Harris who's secretly running the Biden administration now.

The corrections have been issued. But as anyone who has spent more than five minutes on Facebook can tell you, the horse simply does not go back into the barn like that. People share the story because they want to believe it, and for the same reason, they're disinclined to do a quick Google search to see if it's even true before they share it. In general, questions about whether a story is true barely even enter into the way people discuss and spread them on social media.

Jared Holt, a researcher for Right Wing Watch, tweeted on Tuesday, "it's becoming undeniably evident that the GOP is treating blatant disinformation as fair-game politics. It has for a long time, to varying degrees, but it really is front and center right now."

Right now, all the incentive structures reward right wing outlets spreading misinformation. It goes nuts on Facebook, swiftly hardening into right wing common wisdom that won't get pried out of their heads with a crowbar and will be repeated like gospel in conservatives social circles for years to come. Corrections are merely a blip in time compared to the lifespan of the lie itself.

As Parker Molloy at Media Matters writes, the situation is often made worse by mainstream media outlets refusing to label lies and misinformation for what they are. For instance, Bloomberg's White House reporter, Jennifer Jacobs, tweeted, "White House pushes back on claims Biden wants to steer Americans off meat," language that casts this merely as a partisan "dispute." As Molloy writes, "Jacobs could have more honestly framed her reaction to the White House's cheeky response to a lie by describing it as exactly that: a response to an obvious lie."

The good news is that clear, concise debunkings — Daniel Dale at CNN and Katie Shepherd at the Washington Post provide good examples with the Biden burger story — can help slow down the speed by which fake stories spread. Not because many conservatives bother to check mainstream sources before they share fake stories. But, as Dan Pfeiffer at Message Box writes, such fact-checkings can be used "in response to your MAGA uncle calling Biden 'the Hamburglar'" on social media.

In my experience, a quick, "Hey, turns out that story isn't true" on someone's Facebook page — while it means people will be salty with you — often does embarrass them enough that they stop talking about the fake story. It helps to use a light tone and not get drawn into a debate about whether or not one is a bad person for sharing the story or whether or not "liberals do it too." Just a quick-and-dirty "it's not true," then move on.

As I wrote Tuesday, this problem is only going to get worse. Right wing media outlets are amply rewarded for putting out misinformation that spreads rapidly. Social media companies also profit from the spread of lies, and reluctantly putting fact checks on the links after they've already gone viral does little to change things. The only hope is for media outlets to get clearer in calling out fake stories for what they are and for people who value fact-based reporting to stay strong in correcting — gently, without getting drawn into arguments — the lies. But until right wing media starts paying a higher price for spreading lies, this problem will continue.