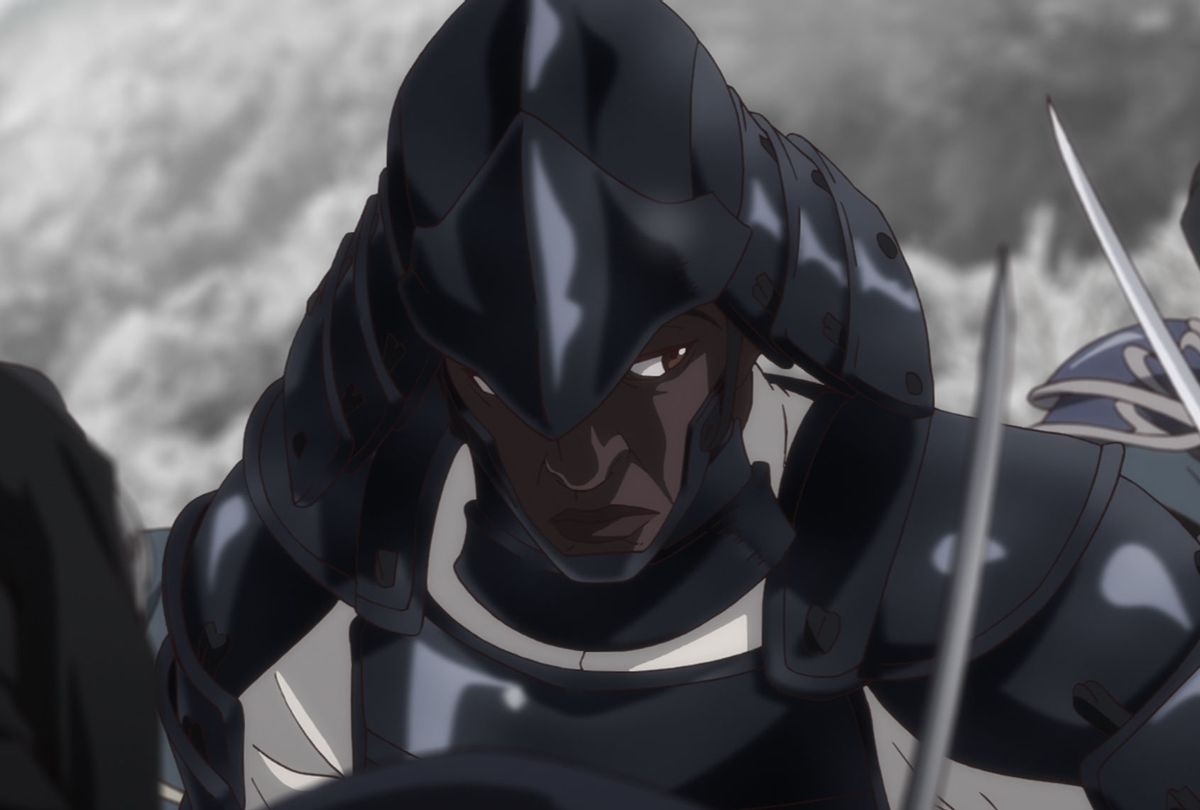 "Yasuke" creator LeSean Thomas leaves everything on the field with his new Netflix anime series. That's blatantly obvious the moment we drop into the center of a battle where armored warriors clash against socerers and giant mechs raining fire down on troops. The year is 1582, but Thomas mashes up classic images of feudal Japan with anime robots, shamans, demons and mutants because he can.

This is his legendary world to build about a Black samurai, a character based on an actual historical figure, and thus far no other artist has built any mythmaking around him.

The title character, voiced by LaKeith Stanfield, is based on an African man brought to Japan by Jesuit traders who went on to become a samurai serving under Nobunaga Oda. Reportedly Yasuke was present when Nobunaga died by suicide, and that highly fantastical battle in which we're thrust is a memory of his daimyo's last stand, and it haunts him.

Two decades afterward he abides in anonymity and is known simply as the Black Boatsman, and would have put his entire past behind him if not for the need of a sickly girl named Saki (Maya Tanida) whose mother hires him to transport her to a doctor living in a village far away. But as he's hired we know that there's more to Saki than her mother is letting on, requiring the ferryman to take up the sword once again.

Thomas started out in the animation industry by working on "The Boondocks" but went on to become the supervising director and creative producer on "Black Dynamite," two Adult Swim cult favorites. His first project with Netflix was directing the fantasy action series "Cannon Busters" but "Yasuke" reads as a project closer to the heart and feels more personal.

Thomas created the series while living and working in Japan, an experience that one guesses informs the way Nick Jones Jr. writes this ronin and certainly permeates Stanfield's portrayal. Saki's story is the family one of the Golden Child variety. Whereas Yasuke is constantly reminded by adversaries and supposed allies alike that he's an outsider, that the homogeneity of Japanese culture, or "the old way" means he'll never be accepted.

"You will always be a servant, no matter what armor you wear," he's told, but he follows samurai traditions to the letter, exceeding all expectations in strategy and swordsmanship.

Saying something is "for the culture" is a cliché these days, even a joke, but "Yasuke" has that sort of an aura, a story that defies erasure and is elevated by an astronomical level of imagination. Stanfield nimbly vacillates between the warrior who is energized and in his prime, and a world-weary man who'd rather live out his days alone.

For all the classic anime flashes of fire, crimson spurts and gore – where there are blades, expect plenty of cartoon disembowelments and beheadings – the prismatic skies and hypnotic dreamscapes seduce more than the average frenetic anime adventure.

Extensive research of the period shows up in the small details in this series, but the creators of "Yasuke" take advantage of the limitless liberty fantasy affords to have fun with the array of characters they bring in, including a gigantic Russian woman and a cheeky robot, voiced by Darren Criss. Such decisions reflect an awareness of the anime form and, yes, the assumptions that will be made based on their hero's identity and their own.

People will no doubt cite "Afro Samurai" as this series' predecessor, or make comparisons to "Samurai Champloo" or "Cowboy Bebop."  Those series were created by Japanese artists and co-opt Black music and culture. This one comes from Black creators, writing about a Black man in Japan, working in a Japanese-created style of animation typically presumed to be the sole province of Asian artists. And they're killing it.

Through his warrior, Thomas and fellow executive producer Flying Lotus construct a full head trip, which is both an aural experience, thanks to the musicians atmospheric score, and an extensively visual one rendered through Japanese animation studio MAPPA, the award-winning studio behind "Attack on Titan," and rock star animator Takeshi Koike's character design.

It's tough to take issue with the audacity of such a brilliant vision, such broad scope. Such an epic demands more than six half-hour episodes, and that's where "Yasuke" hits a snag. The opening episode is a slow dance setting up the adventure, but after that Saki and Yasuke's journey blinks by so quickly that we barely have time to drink in the more serene moments or get to know crucial figures in their world.  Chaos breaks loose and steamrolls across the landscape, and it looks incredible to watch. Such destruction also feels more impersonal than it should.

A few auxiliary figures receive an emotional build, but we're barely given a chance to get to know them any better than Yasuke since when he's not fighting them, he's passing them on the road.

Such swiftness prevents us from fully embracing the message Thomas, Jones and Flying Lotus may have been seeking to spin beneath the heroism and battle madness about identity and what it means to live in a land and participate in its culture while never fully being a part of it.

There are far worse critiques a show can sustain than the observation that there's not enough of it, or that it stuffs too many attention-grabbing elements in too small of a space. It simply means "Yasuke" would be better if there were more of it, and either by accident or intentionally Thomas and his collaborators leave enough about this hero shrouded to make room for that to occur.

All episodes of "Yasuke" are available on Netflix starting Thursday, April 29.