As "Jeopardy!" ratings continue to slip, producers promise a new host will be announced soon 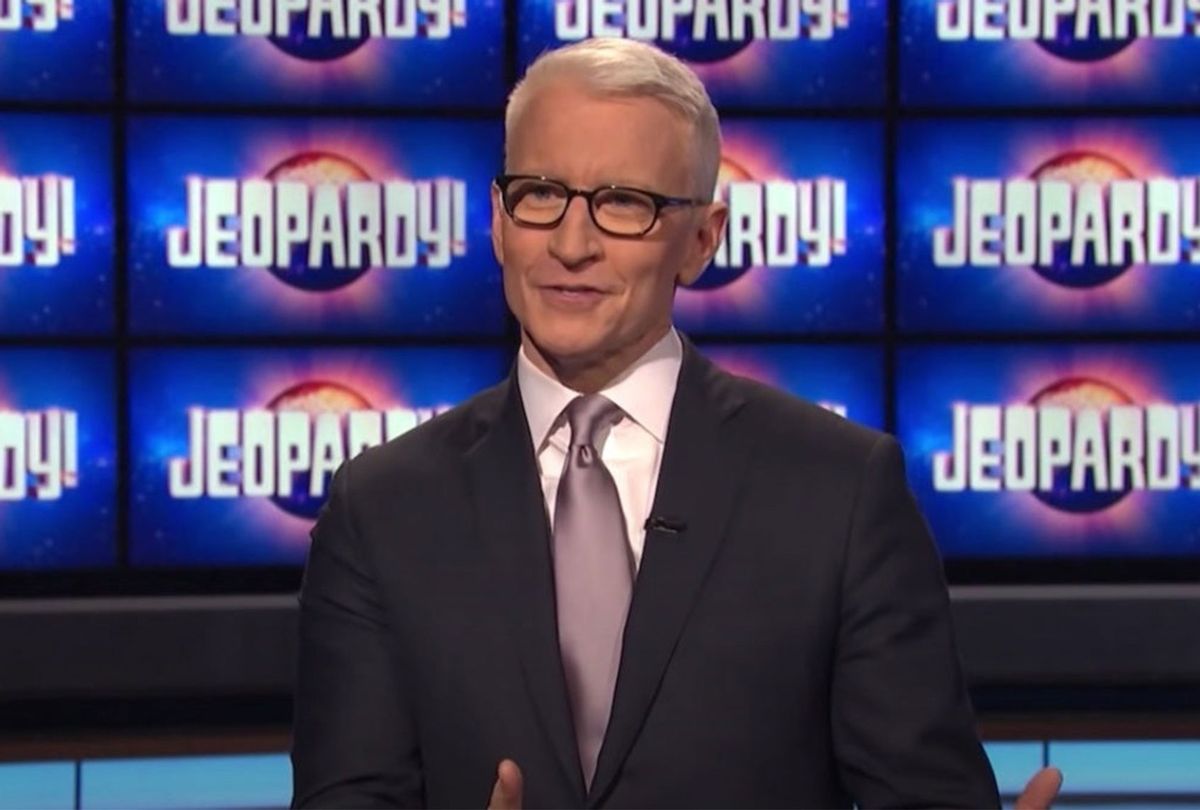 "Jeopardy!" ratings has been struggling following the death of longtime host Alex Trebek, and the rotating guest hosts aren't necessarily helping. In fact, Anderson Cooper's debut at the podium marked a new low for any of the game show's guest hosts.

As The Wrap reports, during the CNN host's first week guest-hosting, ratings fell to a 5.1 rating, which pushed "Jeopardy!" out of the top game show slot as "Family Feud" drew a 5.5 rating. This also put Cooper's performance behind fellow guest hosts Dr. Oz and Green Bay Packers quarterback Aaron Rodgers, whose debut ratings were 5.2 and 5.6, respectively.

As of now, Ken Jennings — who is the highest-earning "Jeopardy!" champion of all time and is a consulting producer on the game show — is the highest-rated guest host. He drew a 6.2 rating in his first week.

Trebek's farewell week in early January drew an average of a 6.6 rating and his final episode on Jan. 8 drew 14 million viewers.

This marked decline in ratings has fans of the show reiterating, yet again, to simply hire former "Reading Rainbow" host and "Star Trek: Next Generation" actor LeVar Burton for the role. While Burton is slated to guest host in the coming weeks, as Salon's Melanie McFarland wrote, there has been a Change.org petition running since March to "show Sony Pictures Entertainment Inc. and producers Mike Richards and Harry Friedman just how much love the public has for Burton."

It currently has 253,681 signatures from people looking for Burton to be permanently hired.

According to executive producer and recent guest host Mike Richards, the heads of Sony Entertainment will soon have to make a decision. As he told the Wall Street Journal's podcast, "The Journal," when filming for Season 38 starts this summer, the next official host will be at the helm. Their choice will be announced in late July or early August.

"They've been a part of it," Richards said. "They know what's going on in the studio. They're watching the feed, the tapings. It's very extensive. It's unlike anything I've ever been a part of, as far as testing in its size and scope."

Several of the guest hosts — which will go on to include Buzzy Cohen, Mayim Bialik, "Today" co-anchor Savannah Guthrie and George Stephanopoulos — have indicated that they don't want the permanent position. Others, like Dr. Oz and Ken Jennings, have caused varying levels of outrage from fans.

Jennings came under fire when his "unartful and insensitive" tweets resurfaced. One tweet from 2014 read, "Nothing sadder than a hot person in a wheelchair," while another in 2015 included a joke about a terminally ill "Star Wars" fan who got to watch "The Force Awakens" before he died. Jennings had previously refused to delete these tweets, saying that they "could lead to smart replies and even advocacy. Deleting them felt like whitewashing a mistake."

In the case of Dr. Oz, some "Jeopardy!" fans began using the hashtag #BoycottJeopardy, pointing to the television host's propensity for pushing dubious products as "miracle" health cures. They called Oz a "snake oil salesman" and "the antithesis of the honest desire for knowledge that Alex Trebek stood for  throughout his career."

NFL player Aaron Rodgers, however, has previously voiced an interest, as has Burton. In an MSNBC interview, Burton said, " In many respects, I feel like I have been preparing my whole life for the job . . . should that job come my way, I would be exceedingly glad."

However, Richards said that the "Jeopardy!" executives plan on making an informed decision since they are a "pretty cerebral group," but that fan input will have an effect.

"It's definitely going to play into it, and I think there's different ways fan response can play into it," Richards explained. "What we are working on, as far as really understanding what the fans are saying and who's saying it, is very important."