Tucker Carlson has blasted GOP pollster (and Kevin McCarthy pal) as a "fraud." Turns out he may have a point 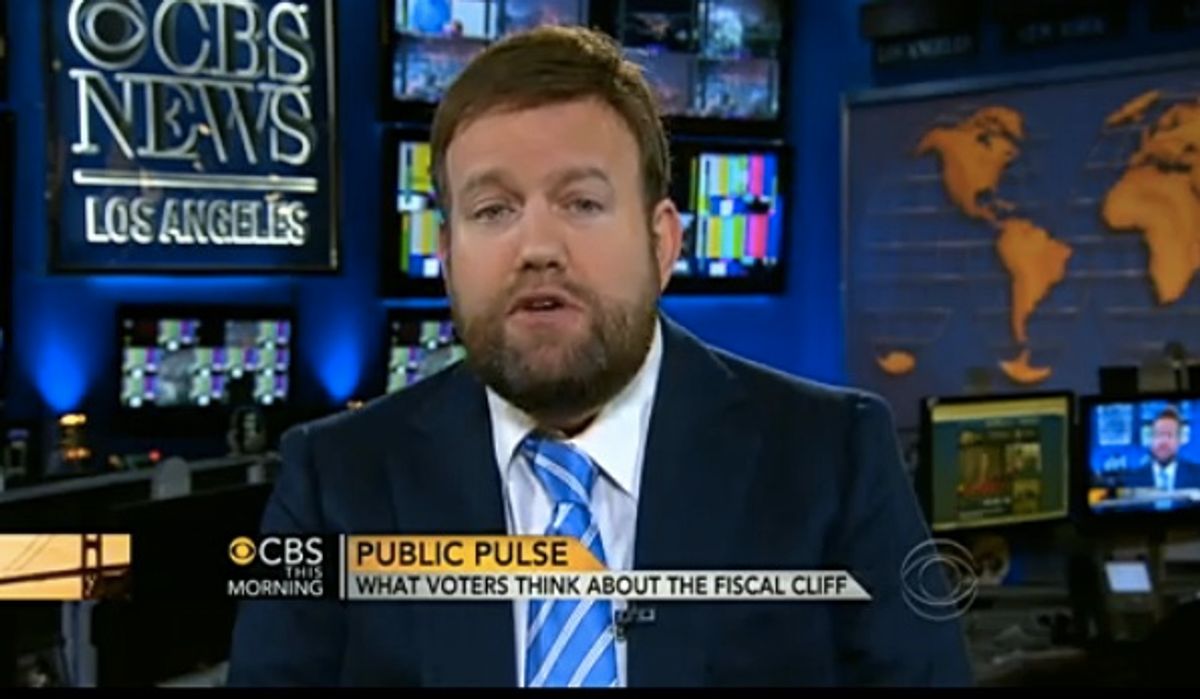 Longtime Republican pollster Frank Luntz and his friend and short-term roommate Kevin McCarthy — who is now House minority leader — have been repeatedly targeted in recent weeks by Fox News host Tucker Carlson, who has claimed that Luntz's famous "focus groups" almost amount to "fraud." As it turns out, Carlson may have a point.

On Oct. 15, 2018, a few weeks ahead of the crucial 2018 midterms VICE News tweeted, "Tonight on #VICENewsTonight. Frank Luntz heads to Texas to talk to voters ahead of the midterm elections. See it on HBO at 7:30 PM EDT." And indeed that night HBO aired a VICE News focus group orchestrated by Luntz, which had been filmed three days earlier in Dallas.

Tonight on #VICENewsTonight.@FrankLuntz heads to Texas to talk to voters ahead of the midterm elections.

Luntz's panel discussion featured 16 Texas voters, half of them said to be supporters of Sen. Ted Cruz, the Republican incumbent, and the other half said to be supporters of Rep. Beto O'Rourke, his Democratic opponent. During the roundtable chat, participants were chosen by Luntz, who also decided what questions would be asked. But what neither HBO nor VICE News told their audience was that Luntz was being paid by the Cruz campaign.

On Oct. 23, a week after the show aired, Ted Cruz for Senate paid Luntz's company FIL, Inc. $51,129.87 for "survey research/travel." Despite the purported balance on Luntz's panel, only five of the 16 voters he selected voiced support for O'Rourke that night. That looked like something of a PR victory for Cruz at a moment when polls predicted an extremely tight race. Cruz went on to win re-election. 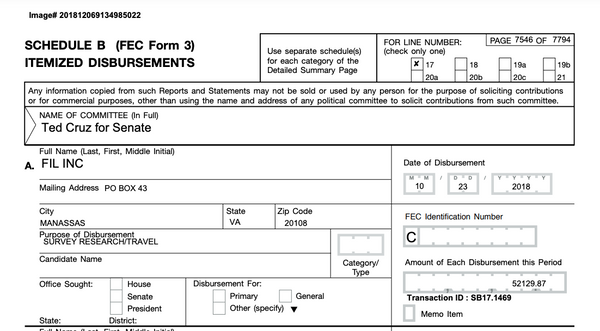 Following the original publication of this story, VICE News told Salon it had no idea Luntz was doing business with Cruz's campaign at the time of the Texas focus group. "VICE News produced a series of seven panels moderated by Frank Luntz from December 2017 to January 2019. Recently, it was reported that Luntz was on Ted Cruz's reelection campaign payroll in 2018. VICE News was unaware of this affiliation, and Luntz did not disclose this information at the time of these productions. We have added an editor's note to these stories alerting readers to this important update," a VICE spokesperson told Salon.

Luntz appears to have advertised on Facebook to enlist participants for his 2018 Vice News/HBO focus groups in various cities, including Denver, Atlanta, New York, Charleston, West Virginia, and Manchester, New Hampshire — but not in Dallas.

That VICE News panel aired on HBO and has been viewed more than 697,000 times on YouTube — one of only six focus-group videos that Luntz features on the portfolio page of his personal website. 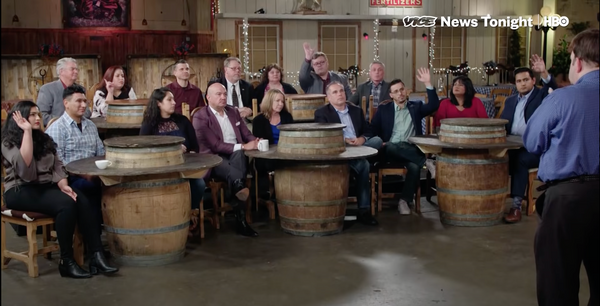 During the focus group, Luntz highlighted one Cruz supporter, a 32-year-old Mexican-American man named Josue Gonzalez, who said he was opposed to a path to citizenship for DACA recipients even though, by his own account, his own parents most likely entered the country illegally.

I asked a Ted Cruz supporter in my focus group who opposes a pathway to citizenship for DREAMers whether his own parents came to the U.S. legally.

At that time, Gonzalez worked for a major federal government contractor, Triple Canopy.

According to FEC documents, Luntz's various companies, which include Luntz Global Partners, Luntz Global, Luntz Research Group, Luntz Research Companies, Luntz Malansky Strategic Research, and The Word Doctors, have been paid $750,000 since 2003. But his federal campaign work dried up after a widely publicized feud with then-candidate Donald Trump in 2015. According to Politico, Luntz "told a closed-door gathering of major conservative donors in Southern California that Trump was dangerous to Republicans and was 'turning what we believe into a joke.'"

Although Luntz incorporated FIL in 1993, the company had never previously received any federal payments until the 2018 election cycle. Since that was after Luntz's fallout with Trump, one possible interpretation is that Luntz sought to obscure the payments by using an entity that didn't feature his last name. Payments disclosed under FEC rules would not have drawn attention to the fact that Luntz was the true recipient of the money. Cruz was Luntz's only client in the 2018 election cycle client, and made just that one payment to FIL, Inc. (FIL also received minor event reimbursement and event supplies payments from Sen. Bob Corker of Tennessee and Rep. Richard Hudson of North Carolina, of $1,163 and $222, respectively.)

After Trump won the 2016 election, Luntz tried to work his way back into the Republican fold, securing meetings with his old friend, former South Carolina congressman Mick Mulvaney — then the director of Trump's budget office — three times in early 2017. In June of that year, Luntz met with Education Secretary Betsy DeVos to share what was described as "a 60 slide deck of the words to use and the words to lose regarding parental choice, vouchers, charter schools, teacher pay, and all the other issues in education reform." The following month, Luntz had a 90-minute dinner meeting with Labor Secretary Alex Acosta.

Luntz has a history of repeatedly claiming to quit electoral politics. He did so in September 1998, saying he would concentrate on "principle politics," and then did so again in April 2009 with a supposed move to Hollywood, which he said offered "a chance to create a new reality, in two hours time." It happened again in January 2014 with a reported move to Las Vegas and the sale of a majority interest in Luntz Global Partners to MDC Partners. According to Senate testimony, Luntz left that company in late 2017 (the company was rebranded as Storyline Strategies in 2019).

In August of 2018, Luntz again said he had "become increasingly disenchanted with his party and critical of Trump."  A few months later, however, he was working for Ted Cruz's campaign under the FIL, Inc. brand, while also working for VICE News/HBO.

On May 1 of this year, Fox News host Tucker Carlson described Luntz's focus groups this way: "Frank Luntz slyly dresses up his own personal opinions as social science. He'll conduct something called a focus group. That's a moderated conversation between several people that has, in fact, no actual relevance to anything. It's just random people yammering. Your 90-second exchange with the UPS guy this morning meant more than a Frank Luntz focus group. And yet, purely on the basis of that irrelevant conversation, Luntz manages to make pronouncements about the country and how the Republican Party should respond to it. Most of those pronouncements, as you can imagine, tend to comport perfectly with his own views, as well as with the views of Google executives."

Carlson has also devoted his energies recently to attacking Kevin McCarthy, whom he outed for rooming with Luntz under not-quite-explained circumstances, as Salon explored in a report earlier this week.

CORRECTION: This story has been revised since its original publication to include a comment from VICE News, which says it had no knowledge that Frank Luntz was being paid by the Cruz campaign in 2018.