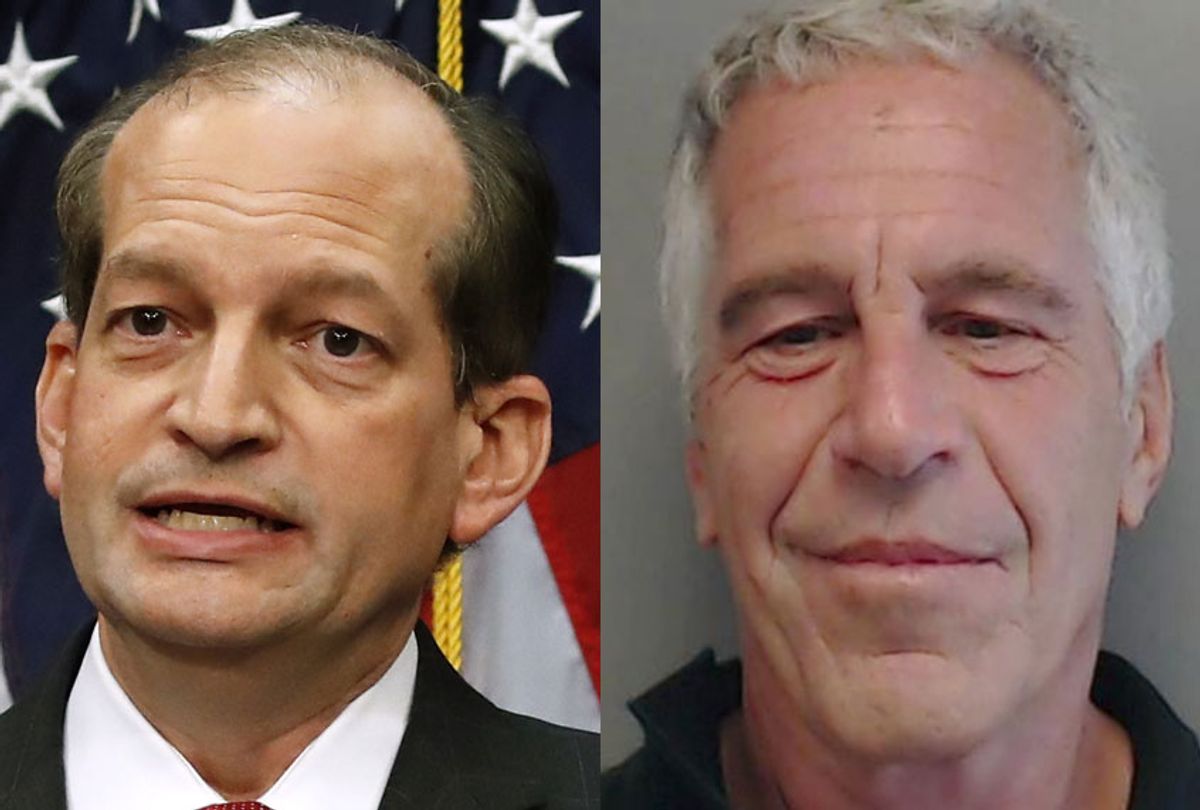 Acosta is facing numerous calls to resign after Epstein was charged with running a child sex trafficking ring in New York and Florida. Acosta previously served as U.S. attorney in Miami, where his office identified 36 underage victims and issued a 53-page indictment against Epstein in 2007. Rather than face life in prison, Epstein cut the “deal of a lifetime” with Acosta, as the Miami Herald reported, allowing Epstein to plead guilty to two state prostitution charges and serve just 13 months in county jail, where he was allowed to leave to work from his office six days per week. The deal also granted the well-connected billionaire who investigators believed hosted underage sex parties for affluent men immunity for any unnamed “potential co-conspirators.” A federal judge later found the deal was illegal because Acosta did not consult the alleged victims of Epstein's crimes before agreeing to the deal.

Rep. Katherine Clark, D-Mass., says this was not the only time Acosta turned a blind eye to child trafficking.

Acosta’s Labor Department budget proposal for fiscal year 2020 proposed slashing the budget of the International Labor Affairs Bureau (ILAB) by nearly 80 percent. The agency is charged with combating human trafficking, child labor and forced labor in the United States and around the world.

“This is now a pattern,” Clark told the Guardian. “Like so many in this administration Mr. Acosta chooses the powerful and wealthy over the vulnerable and victims of sexual assault and it is time that he finds another line of work.”

Clark grilled Acosta about the proposed cuts during a hearing in April.

After Clark and Acosta both agreed that more needed to be done to combat trafficking, Clark pointed out that Acosta had also “proposed a budget cut, almost 80 percent, 79 percent to ILAB where this work is done, bringing its budget from $68 million to just $18.5 million.”

“I’m sure you’ve come prepared to justify this cut to us but it doesn’t go unnoticed that this isn’t the first time that you’ve ignored human trafficking,” Clark said. “Your office found that there had been a sexual abuse pyramid scheme that involved at least 36 underage girls. … Mr. Epstein raped and recruited these girls … and there is evidence that he allowed his friends to do the same.”

“Epstein should have been looking at a sentence of 366 years at a minimum. But that’s not what happened,” Clark continued. “How can we expect you, the labor secretary, to fight for American workers if you couldn't even fight for these girls?”

The proposed ILAB cuts were not the only Acosta decision to come under fire from human rights advocates. Earlier this year, the Labor Department rolled back Obama-era protections for some human trafficking victims and will now deny certain visas to victims of trafficking or other workplace crimes unless they first consult with another law enforcement agency like the FBI.

Erika Gonzalez, a lawyer for the Coalition to Abolish Slavery & Trafficking, told the Daily Beast that the new rule will force victims to jump through “a lot more hoops,” often after they have endured devastating ordeals.

“What the Epstein case shows is when these policies around human trafficking are implemented, they’re not necessarily considerate of the impact on the victims themselves,” Gonzalez told the site. “With the Department of Labor asking the FBI to look into [workplace violations] first, they’re adding another barrier for victims of trafficking to access the services the Department of Labor has.”

While the visa rule change will be implemented by the Labor Department, Democrats are fighting back against the proposed ILAB cuts. In their own 2020 budget proposal, Democrats called for expanding ILAB funding from from $68 million to $122 million.

President Trump, a longtime friend of Epstein, meanwhile tried to distance himself and Acosta from Epstein’s alleged crimes Tuesday. Trump claimed he was “not a fan” of Epstein, despite previously having praised him as a “terrific guy” with a penchant for women “on the younger side.” Trump said that Acosta had done a “fantastic job” and insisted, “I do hear that there were a lot of people involved in that [Epstein] decision.”

Asked about the Epstein case on Tuesday, Trump had nothing to say about the victims but lamented the criticism of the prosecutor who let Epstein get off with a slap on the wrist more than a decade earlier.