Tucker Carlson is bashing Luntz and McCarthy as RINO sellouts. But the real lesson here might be about D.C. grift 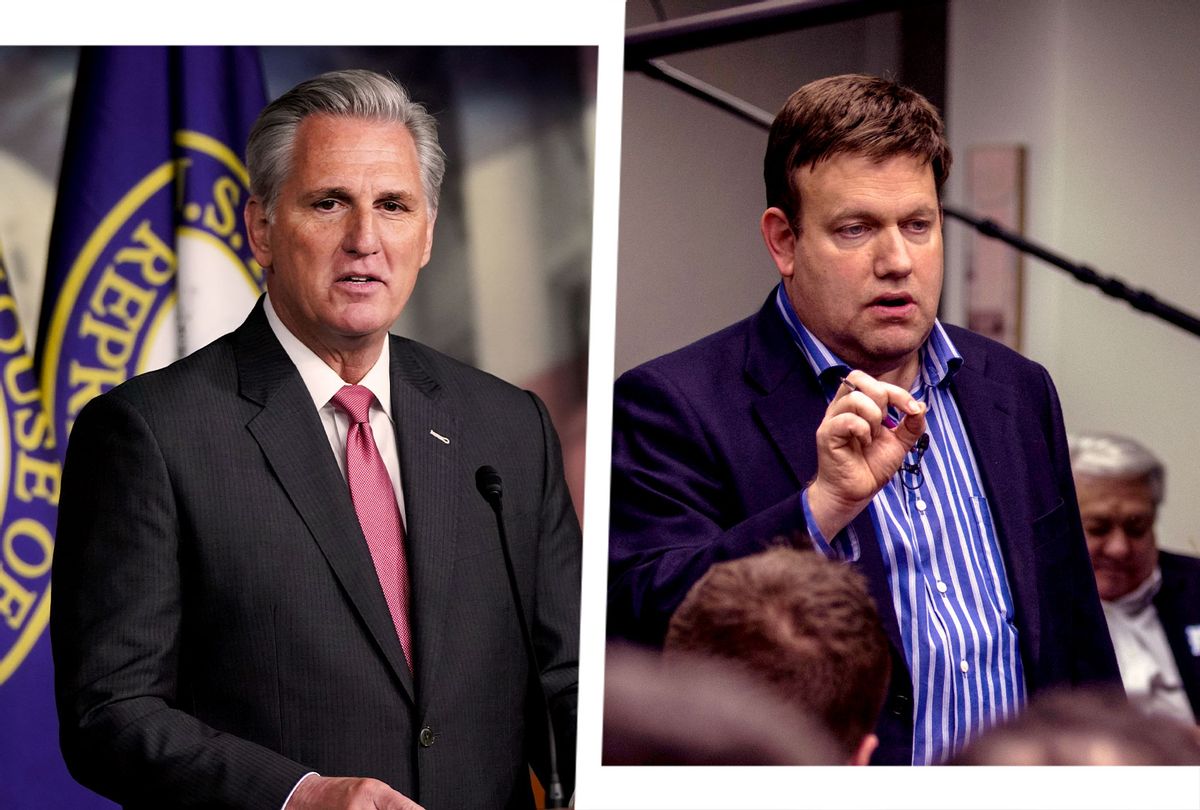 Longtime Republican pollster and frequent cable news guest Frank Luntz, who provided housing to House Minority Leader Kevin McCarthy this year and whose company, FIL, Inc., was paid to do 2020 polling by McCarthy's leadership PAC, appears to have a staff consisting mostly of Democrats.

In April 2020, FIL, Inc. received a $77,900 loan from the Paycheck Protection Program, which was expected to save five jobs at Luntz's company. An exhaustive LinkedIn search conducted by Salon identified five employees at FIL, Inc., including Luntz — and three of the other four have been involved in Democratic politics at various times.

Luntz hired Daniel Siegel in August of 2018 directly from the campaign operations team of Katie Porter, then a House candidate in California and now a Democratic member of Congress. According to his LinkedIn profile, before working for Porter as a press assistant and deputy field director, Siegel was briefly deputy political director for California Gov. Gavin Newsom's campaign earlier in the 2018 cycle. (He appears to have graduated from UCLA just before that, so these job titles may carry some poetic license.) At the moment, Siegel is working on Luntz's team overseeing research on vaccine hesitancy among conservatives.

Siegel seems to have traveled to Dallas in October 2018, at precisely the time that Luntz hosted a VICE News/HBO focus group on the tight Senate race between Ted Cruz and Beto O'Rourke, while Cruz's campaign was paying Luntz's company for "survey research/travel," as Salon reported last week.

When in Dallas have to see @mcuban, thanks for the ride! pic.twitter.com/IoU9zDGwtw

Luntz's social media manager and content creator, Hetal Bhatt, has worked for him since August 2018, but worked concurrently in 2019 for Ami Horowitz, a right-wing, anti-Muslim documentary filmmaker who briefly ran for president as a Democrat. 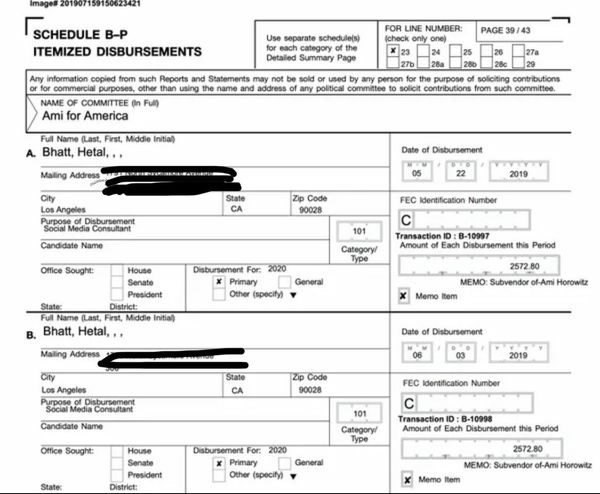 That was a strange choice considering Bhatt's social media posts, which often appear strikingly at odds with the views of Luntz, McCarthy or Horowitz. On several occasions he has posted anti-Trump and pro-Black Lives Matter content on Instagram, writing during the George Floyd protests last June, "Y'all need to edit your #BlackoutTuesday captions and tell people to donate to groups like the @NAACP_LDF, @ColorOfChange, and Minneapolis' own @ReclaimTheBlock to help them win this fight." In February 2019, Bhatt posted: "The #BorderWall is such a 'national emergency' that Trump waited 2 years to declare it" with a photo of Los Angeles street art depicting Trump's face and the word "disobey."

Luntz's chief of staff at FIL, Inc., Alexis Vickers (previously his executive assistant at a different company, Luntz Global), was formerly director of scheduling for the Democratic conference leader in the New York State Senate during 2009 and 2010. During that period she also donated to the 2009 campaign of Manhattan Borough President Scott Stringer, a progressive Democrat (and current New York mayoral candidate).

Andrea Arletti, the final employee, appears to be of Italian origin and now lives in the UAE, with no visible ties to either Democratic or Republican politics. Arletti seems to have started working for Luntz in September 2019, and earlier that year began contributing political columns to La Voce di New York, a bilingual English-Italian site. In April of 2020, Arletti interviewed Luntz for a column entitled "Trump and Biden's possible strategies for the White House in the midst of the coronavirus pandemic," notably without disclosing his business relationship with Luntz.

Arletti's LinkedIn page describes him as project director for Luntz at Expo 2020 Dubai, responsible for "communications, marketing, and messaging strategy." It's not clear what Luntz's involvement may be with Expo 2020, an immense world's-fair-type commercial and networking event that was delayed by a full year due to the pandemic and will now open this October.

To be fair, Luntz has said he began his political career as a youthful Democrat in 1976, working with a town council candidate in West Hartford, Connecticut, who made Frank cry after forgetting to show up at a local mall to campaign for Jimmy Carter. The council candidate remembers that episode differently, but in Luntz's version of the story, after that he became a Republican.

In 1993, Luntz described himself to the Hartford Courant as a social libertarian, a conservative on economic issues and a mild hawk on foreign policy. "I act like a Democrat," he said. "I don't act like a conservative in my dress or the way I speak. I'm shy, but I'm not stodgy. I don't have the half-a-million-dollar beach house, even though I could."

After the 1992 elections, the Courant story notes, some Republicans accused Luntz of having "prostituted himself politically by jumping from one candidate to another, seemingly without regard to ideology."

In 2007, Luntz caused a stir in Republican circles by meeting with Rep. Chris Van Hollen of Maryland, then head of the Democratic Congressional Campaign Committee. That came after John Boehner became House minority leader in February 2006 and "unofficially banished" Luntz from the party, a ban that didn't last long. Some Republicans were also "upset that [Luntz] invited a number of Democrats, including liberal columnist Arianna Huffington, to his annual party for the Major League Baseball All-Star Game."

Since 2010, the longtime Republican pollster has held a board seat at the Dreyfuss Initiative, the nonprofit led by actor Richard Dreyfuss, a well-known Hollywood Democrat who described Donald Trump's celebrity supporters as "whores" in 2016. 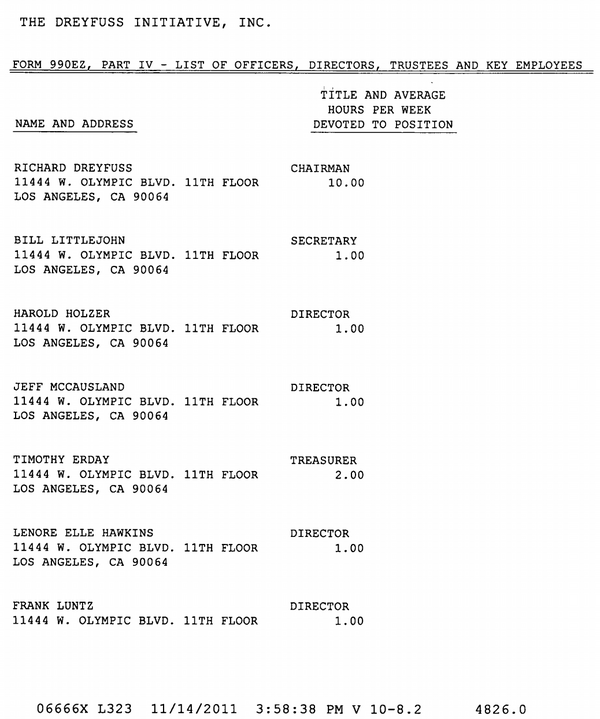 Luntz has discussed his "special bond" with Joe Biden and described himself as a longtime adviser and confidant to the current president, as well as a close friend of Beau Biden, the president's late son. "I know Joe Biden; I've known him for 30 years," Luntz says in the YouTube video embedded below.

"I taught Beau Biden, Joe's son, he was one of my favorite students, I know I was one of his favorite professors, and we stayed friends," Luntz continues. "I used to fly to Philadelphia from L.A., and Beau would pick me up at the airport at about 6:30 a.m., drive me to his father's house in Wilmington. I'd go to sleep upstairs for an hour and a half, take a nap, shower and I'd come down around 9 o'clock. We'd talk about language and we'd talk about policy and we'd talk about presentation and communication for hours, and we did this week after week."

In late 2020, emails allegedly exchanged between Luntz and Hunter Biden in 2012 circulated on the internet, purportedly sourced from Hunter Biden's laptop. Their authenticity is unconfirmed, but their contents are plausible enough: Hunter writes to Luntz, "I love you … beau loves you." Luntz responds by observing that he was recently snubbed by Joe Biden, who was then vice president, writing that "fair-weather friends get fair-weather treatment … and by the way, I declared your dad the winner of his debate against Paul Ryan even though Ryan is an actual current client." That much was true: Ryan, Mitt Romney's 2012 running mate, was a client of Luntz Global.

Early this month, Fox News host Tucker Carlson began a sustained campaign of attack against Luntz — and by extension against Kevin McCarthy — suggesting that Luntz has lobbied for "some of the most left-leaning" causes in American politics.

Few actual supporters of "left-leaning" causes would agree, but Carlson is on safer ground in claiming that Luntz's relationship with McCarthy "gives Luntz outsized influence over the Republican Party's policy positions." Carlson has also suggested that Luntz's focus groups essentially yield cooked results, saying, "Most of those pronouncements, as you can imagine, tend to comport perfectly with his own views, as well as the views of Google executives."

Luntz would surely reject that characterization, but it's true that the pollster's former company website offered up "a little known fact: we work on both side of the aisle" and cited work for a wide range of major corporations, including Google, eBay and Facebook — now the focus of Republican anger at "Big Tech." Luntz likely never imagined that one day those associations, along with his vague history of bipartisanship, would suddenly appear toxic to his fellow conservatives. 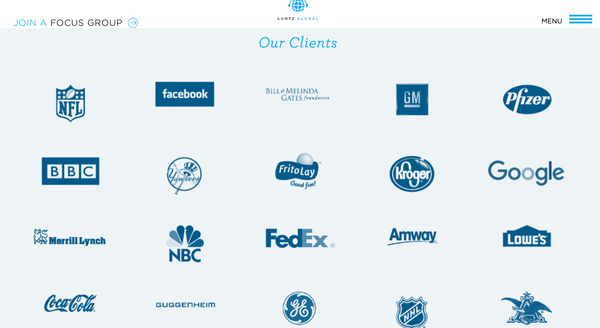