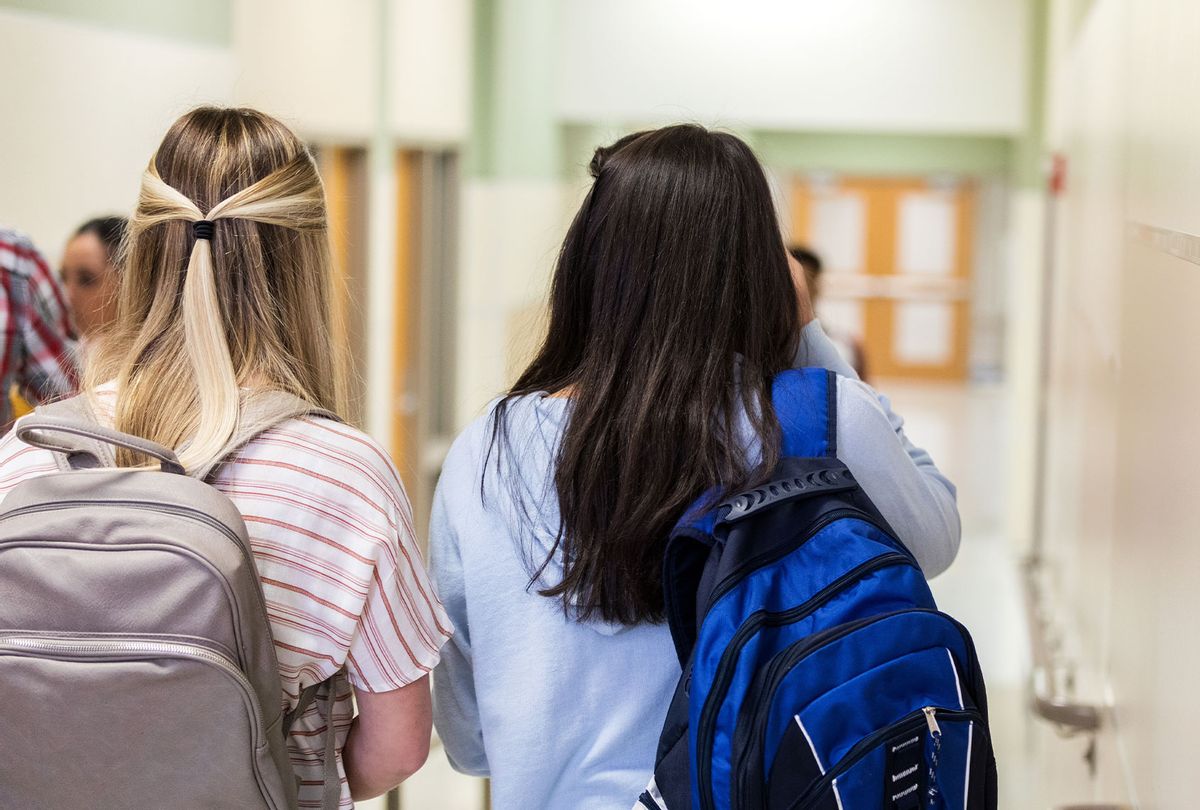 Teen girls with their back packs as they walk down the hallway to class. (Getty Images)
--

In a tale as old as time: a Florida high school is being accused of sexualizing teenage girls' bodies — this time, by editing at least 80 yearbook pictures of female students without their permission to cover up things like exposed shoulders or supposedly low necklines. With permission, the local news station of the high school posted some of the before and after yearbook pictures on Twitter, which you can see below.

Some of the students of Bartram Trail High School in St. Johns are speaking out publicly about the yearbook's not-so-sneaky, puritannical shaming, including ninth grader Riley O'Keefe, whose unedited and edited yearbook photos are included side-by-side below.

"The double standard in the yearbook is more so that they looked at our body and thought just a little bit of skin showing was sexual," O'Keefe said, according to CBS News. "But then they looked at the boys, for the swim team photos and other sports photos, and thought that was fine, and that's really upsetting and uncomfortable."

And O'Keefe is absolutely right — high school dress codes and modesty standards have always been molded by sexism, and weaponized to police or shame teenage girls, as if life isn't difficult and confusing enough at that age. Rather than teach young people to know better than to sexualize women and girls, or, in many cases, teach young people even basic sexual health education or about consent, schools instead focus on policing teenage girls' bodies.

All the time, adult school administrators, or in this case, whoever is responsible for the yearbook edits, place the blame and punishment on teenage girls for somehow being a "distraction" or "temptation" based on how they dress. This dangerously reinforces and teaches young people to internalize rape culture early on, setting up young women to accept blame or blame themselves for how they're treated or perceived.

The energy used to crack down on what teenage girls feel comfortable wearing in high school — possibly one of the most uncomfortable places in existence — seems better and more logically spent instead cracking down on the perpetrators of sexual harassment, which is rampant in high schools and often targets young women and queer youth no matter how they're dressed.

As O'Keefe pointed out, this is ultimately about more than yearbook pictures. "You're not only affecting their photo — it's not just for protecting them — you're making them uncomfortable and feel like their bodies aren't acceptable in a yearbook," she said.

Another ninth grader at the Bartram Trail High School also told CBS she was "horrified" and "disgusted" by the school's bizarre priorities, noting it seems teenage girls' bodies in the yearbook were "the first thing they worried about."

One parent also spoke to CBS with a quote so sexist as to be laughable, and certainly not worth repeating. But the parent certainly said the quiet part loud when she said "daughters," but not sons, should be taught how to "dress decently" — as if plenty of teenage boys, young men, and those around them wouldn't benefit from being banned from wearing salmon shorts and Sperrys.

At the end of the day, as discouraging as it is that schools are still like this, it's encouraging and inspiring to see young people speak up, take action, and pursue change.

"The dress code and sexualization of young girls' bodies has been happening for a long time," O'Keefe told CBS. "All the messages I get about people being thankful for me speaking out are worth it, and I'd do it a million times."