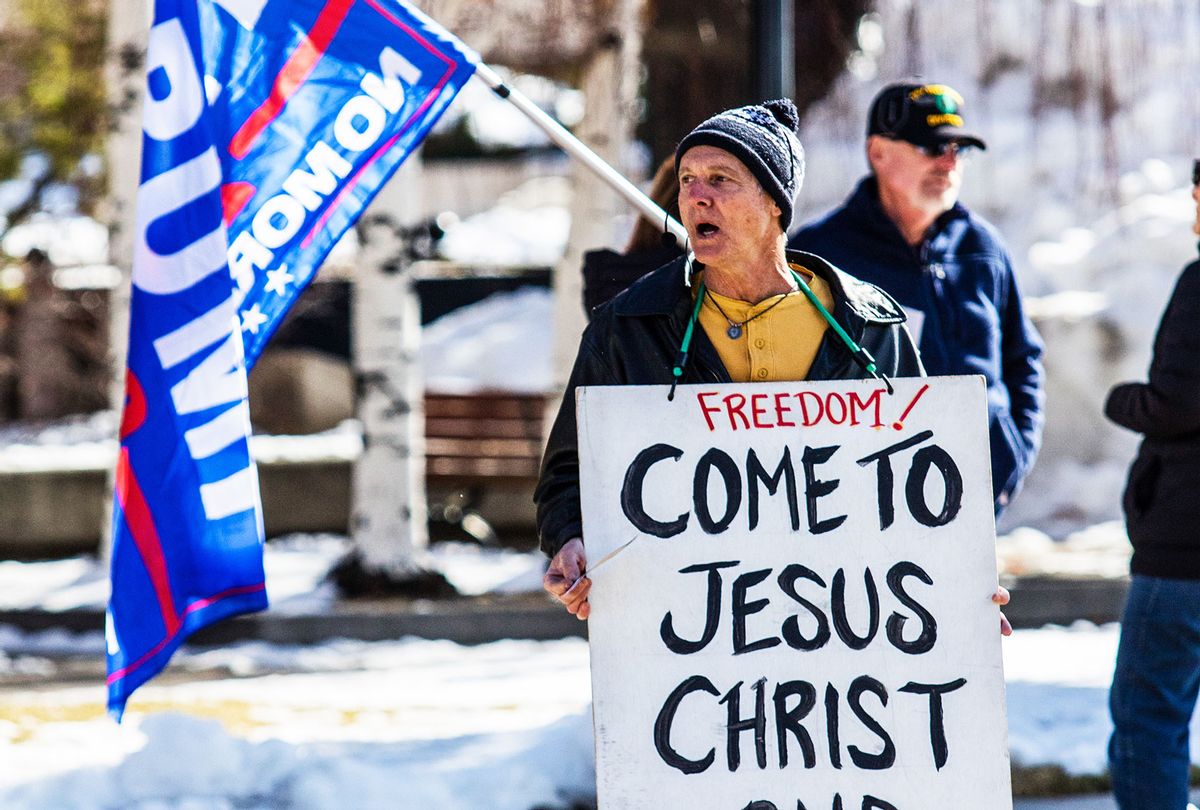 A protestor holds a placard during the demonstration. Protesters gathered at the state's legislative building to protest various causes such as the Biden inauguration, Covid-19 restriction, vaccine, religious ideas, Qanon, common core education, without a cohesive message, during the first day of the 81st (2021) Session of the Nevada Legislature. (Ty O'Neil/SOPA Images/LightRocket via Getty Images)
--

People who believe in QAnon often self-describe as independent thinkers, not beholden to any media, corporate, or government propaganda. Yet a new study finds that the easiest way to predict whether someone will support the conspiratorial far right movement is if they consume the same far right media sources.

A new survey by the Public Religion Research Institute (PRRI) found that nearly half of Americans who believe far-right news outlets like Newsmax and OANN, as well as one-third who trust Fox News, subscribe to the QAnon belief that a "storm" will sweep politicians they dislike out of power and install beloved far right figures like Trump.

Overall, nearly one out of seven Americans, as well as fully one out of four Republicans, is a QAnon believer.

Perhaps most notable among the polling statistics, however, is the revelation that media news consumption is "by far the strongest independent predictor of QAnon beliefs."

Robert P. Jones, Ph.D., the CEO and founder of PRRI, told Salon in an email that "as the country is becoming less white and Christian," Americans who are attracted to the politics of grievance subscribe to a mutually reinforcing right-wing ecosystem of ideas. Republican partisanship and right-wing media outlets all play a role in this, and they in turn fuel the conspiracy theory movement known as QAnon.

Salon inquired whether QAnon adherents and people who subscribe to Donald Trump's 2020 election Big Lie seem to be motivated by white supremacist or Christian supremacist ideals.

"We unfortunately don't have variables in this dataset to demonstrate that directly, but the demographic characteristics of those who are most likely to believe in QAnon are consistent with those attracted to the politics of grievance and displacement that was key to Trump's 'Make American Great Again' messaging, something I noted in my book 'The End of White Christian America,'" Jones wrote to Salon. "Believing that the country is becoming unrecognizable because of demographic change or that non-European immigrants are replacing white Anglo-Saxon Protestants also runs high among these demographic groups."

This raises a chicken-and-egg question: Are these people being figuratively brainwashed by propaganda, or are those media companies simply giving their customers what they want?

"It is likely that the connection is a two-way street: people who hold QAnon beliefs have migrated to these far right media outlets and those who watch these outlets have become more susceptible to believing these conspiracy theories as they are exposed to them on these outlets," Jones told Salon. He observed that conspiracy theories have throughout history seemed most attractive to people who feel threatened when a perceived social order is being disrupted.

"As the country is changing, these are also people who are generally less trusting of institutions and society, who feel threatened by these cultural and economic changes, and who are attracted to theories that promise that the familiar order of the world will soon be set right," Jones pointed out.

In addition to their support for Trump, QAnon adherents believe that they are privy to an underground truth that the mainstream media refuses to cover. They argue that a secret cabal of elite, Satanic pedophiles secretly runs the world, and that far right-wingers like Trump are engaged in a titanic struggle against them. There is also considerable overlap between QAnon adherence and susceptibility to Trump's pre-election propaganda that if he lost the election was stolen. This ultimately culminated in an unsuccessful insurrection attempt after Trump became the first president to lose an election and refuse to accept the result.