Speaker Trump? He says it's "interesting," but MAGAworld is split on latest 2022 fantasy

Trump thinks the idea is "interesting," but Roger Stone argues it could lead to more irritating investigations 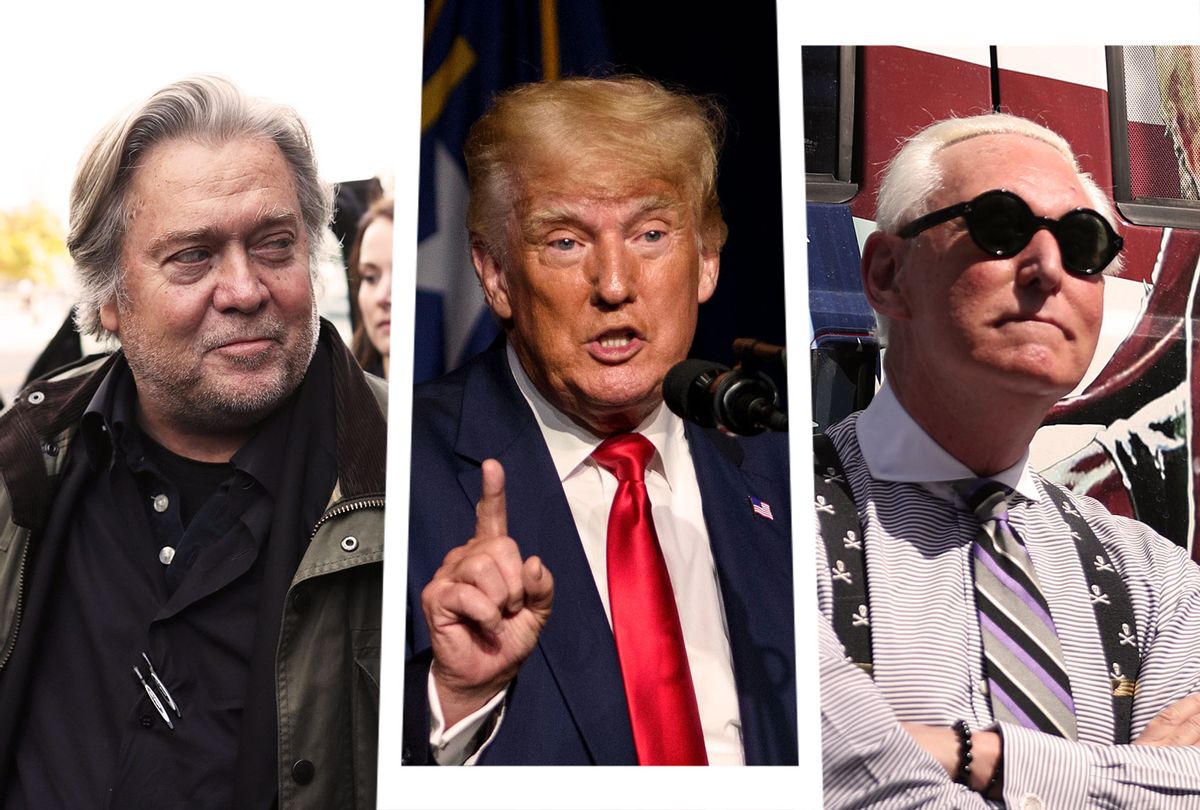 Will former President Donald Trump run for Congress in the 2022 midterms, and then displace Nancy Pelosi as speaker of the House, all with the goal of launching unlimited vengeful campaigns to impeach President Joe Biden? If you speak to people in TrumpWorld the answer is complicated, but Trump himself has agreed that the proposal is "interesting."

The half-baked scheme for Trump to turn his obsession with the 2020 election into a bid to become speaker was first proposed by former Trump adviser turned pardoned right-wing pundit Steve Bannon in a speech at the end of February.

"[Steve] Bannon told the West Roxbury Ward 20 Republican Committee during a video speech over the weekend that his new strategy is for Trump to run for Congress in 2022, get elected, and then become House speaker — assuming that Republicans also retake majority control of the House of Representatives and then rally behind Trump over the current congressman in line for the position," The Boston Herald reported at the time. (That would be a reference to current House Minority Leader Kevin McCarthy, with whom Trump has known issues.) "Then, as House speaker, Trump would move to impeach President Joe Biden over the still-unfounded and repeatedly debunked allegations of widespread voter fraud tipping the 2020 presidential election, Bannon reportedly said."

During that Boston address to a crowd of fervent Trump supporters, Bannon said that after winning a congressional seat in 2022 and becoming speaker early the following year, Trump would quickly move to "impeach Joe Biden for his illegitimate activities of stealing the presidency." That proposition received roaring applause.

The idea didn't get much traction at first, perhaps because Trump was still convinced he could undo the 2020 result somehow (and be "reinstated" in August). But the speaker fantasy now found its way back into the MAGA mainstream — causing some division among Trump fanatics.

One TrumpWorld character who strongly warns against this idea is Bannon foe and longtime GOP operative Roger Stone. In a video posted online Sunday afternoon, Stone fired back at the idea circulating in right-wing media that Trump should seek to grasp the speaker's gavel with his minuscule hands.

Stone's gravest concern is that if Trump is elected to Congress but Republicans fail to win a House majority in 2022, Trump's fate as a lightweight back-bench member could fall into Democrats' hands.

"So sloppy Steve Bannon thinks that former president Trump should run for the House of Representatives, become speaker, and lead the impeachment of Joe Biden. Here's the problem with this plan: What happens if Trump himself is elected to Congress, but the feckless, gutless, weak-kneed Republicans fail to take a majority," Stone said. "Then Trump would be a backbench member at the mercy of Adam Schiff, Nancy Pelosi and Eric Swalwell and Jerry Nadler."

Stone continued: "This demonstrates yet again why Steve Bannon is just a deep state operative, prepared to do anything to aggrandize himself and grab money while selling Trump out on a harebrained idea that nobody with any political experience would ever buy into," Stone added. The professed GOP dirty trickster didn't return a request for comment on this story.

While Trump's allies may be mulling over the idea, the former president appears to be at least a bit curious. Late last week, in an interview with far-right radio host Wayne Allyn Root, Trump said the idea of taking the reins in the House of Representatives was "very interesting."

"Why not, instead of waiting for 2024 — and I'm hoping you'll run in 2024 — but why not run in 2022 for the United States Congress?" Root asked. "A House seat in Florida. Win big. Lead us to a dramatic landslide victory. Take the House by 50 seats. Then you become the speaker of the House, lead the impeachment of Biden and start criminal investigations against Biden. You'll wipe him out for his last two years."

Right-wing commentator Wayne Allyn Root urged Trump to run for a House seat, become Speaker of the House, and then launch criminal investigations into Biden and impeach him. Trump was intrigued: "It's very interesting." pic.twitter.com/5ECkSABDbi

On Monday morning, Trump appeared to backtrack on the idea, telling Fox Business host Stuart Varney that playing out the speaker scheme was "highly unlikely," adding, "You know, there's a whole theory behind that."

Trump's asked by Stuart Varney whether he's considering a 2022 run for Senate or the House.

Trump: "I think that's highly unlikely but they do say that a lot. You've heard that ... you know, there's a whole theory behind that. We won't get into that right now." pic.twitter.com/aJRGRSKzR7

If Trump actually ran for a congressional seat, one fellow Republican who might be less than thrilled is Kevin McCarthy, who would otherwise presumably become House speaker if the GOP wins the majority in 2022.

There's no legal or constitutional reason that Trump couldn't run for Congress, or be elected speaker, but PolitiFact has deemed the scheme unlikely to work out to his benefit, due to "all-but-insurmountable practical obstacles." If the idea is to impeach and both Biden and Vice President Kamala Harris, and thereby become president himself, he would still need a two-thirds vote in the Senate, which does not seem remotely plausible.

Other right-wing pundits, including Wayne Dupree and Fox News contributor Jason Chaffetz, have given some oxygen to this unlikely idea.

If Donald Trump ran for Congress, which he can do, other past presidents have done so, but if he goes for the House, that's where appropriations begin. If he became Speaker of the House too…

It seems like a stretch to imagine the egocentric Trump assuming a less prominent post in the legislative branch, but there is historical precedent. After leaving office as president in 1829, John Quincy Adams was elected to Congress from Massachusetts and served in the House for nearly 17 years. He was not, however, "reinstated" as president, nor did he seek to be.