Chrissy Teigen and the enduring, celebrity need to be relatable

On top of having everything, why does she still so desperately need to be liked? We examine her history online 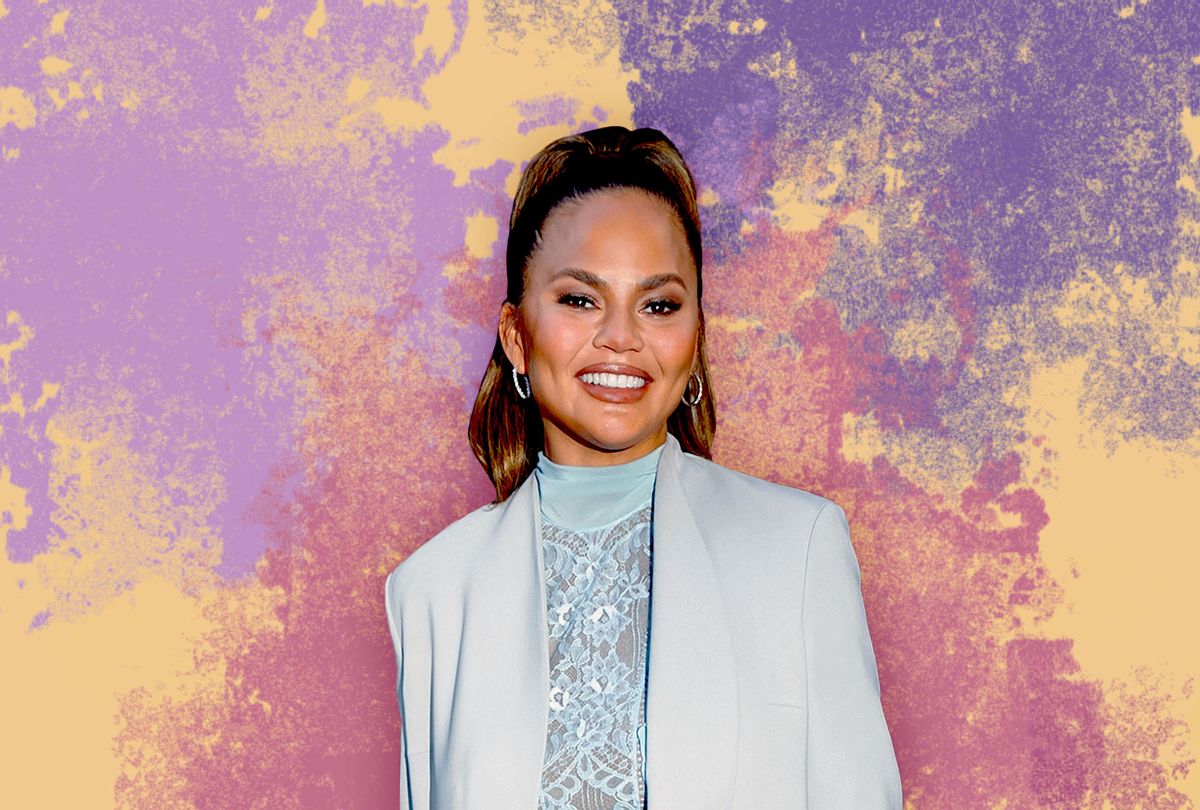 Remember  when cookbook author and social media personality Chrissy Teigen was widely recognized as the "Queen of Twitter"? She was beloved by the liberal "resistance" for her scathing roasts of former President Trump — who once even referred to Teigen as John Legend's "filthy-mouthed wife," a label she unsurprisingly reclaimed.

Alas, her reign ended with the Courtney Stodden cyberbullying scandal, and after an apology, Teigen bowed out of social media for a good month or so — only to return Monday with an even lengthier apology. Teigen's Medium post notably came out the same day fashion designer and "Project Runway" star Michael Costello alleged Teigen had bullied him to the point that he considered suicide, and differs a bit from your run-of-the-mill celebrity Notes app apology.

References to therapy abound, as Teigen writes, "I grew up, got therapy, got married, had kids, got more therapy, experienced loss and pain, got more therapy and experienced more life. AND GOT MORE THERAPY." And even more curiously, she seems to psychoanalyze herself, throughout: "I was insecure, immature and in a world where I thought I needed to impress strangers to be accepted." She also wrote of her attacks, "My targets didn't deserve them. No one does. Many of them needed empathy, kindness, understanding and support, not my meanness masquerading as a kind of casual, edgy humor."

Teigen's apologies have been criticized as a supposedly self-serving attempt at stopping brands and sponsorships from dropping her, which could be true. But it also seems possible her very public penance could serve another goal, which is a return to social media.

After all, we've seen her try to quit before, as recently as March, only to return in April and, not a month later, bow out in May after the Stodden scandal. Not being able to quit something that you know isn't good for you, whether that's social media apps that damage your self-esteem, or a toxic relationship, is a universal human struggle and, quite on-brand for Teigen, arguably the quintessential relatable struggle. In Teigen's case, whether it's social media she can't quit, or the rush of living up to her "relatable, just-like-you" celebrity brand, she continues to come back.

Her apparent need to be on social media to present a relatable, everyday, normal-person persona, is, ironically, pretty unrelatable to ordinary people. It's hard to imagine having a net worth in the millions, and preferring to launch into Twitter feuds over vacationing on a boat in Turks and Caicos. Social media is primarily attractive to "normal" people because the options of what to do for fun are a lot more limited based on how much money you have. Others have raised similar questions about the behavior of "Harry Potter" author J.K. Rowling — if you were that rich, why would you be constantly doubling and tripling down on transphobic commentary on Twitter, when you could be out getting some sun, traveling, seeing the world? And then there's that other Twitter devotee who used to lead our country.

Specific to Teigen, her journey of social media stardom is worth tracing back for a deeper understanding of her actions and the public's relationship to her persona. But more importantly it may help shine light on why she continues to return, even when the toxicity of social media is what appears to have made her a self-admitted "troll" — the kind that would mock a 16-year-old victim of child sexual predation — in the first place.

In 2011, Courtney Stodden first rose to fame as the 16-year-old bride of "Green Mile" actor Doug Hutchison, and quickly became the subject of widespread bullying and cruel "jokes," despite being the victim of grooming and predation. Old screenshots of deleted tweets reveal Teigen had been in on this bullying, too, in some tweets telling Stodden, "i hate you," "go. to sleep. forever," and, "My Friday fantasy: you. dirt nap. mmmmmm baby."

In a May interview with the Daily Beast, Stodden further alleges Teigen sent them direct messages, too. "[Chrissy] wouldn't just publicly tweet about wanting me to take 'a dirt nap' but would privately DM me and tell me to kill myself," they said. "Things like, 'I can't wait for you to die.'"

Also in 2011, an old tweet of Teigen's is resurfacing in which Teigen jokes about Lindsay Lohan's known history of self-harm, writing: "Lindsay adds a few more slits to her wrists when she sees emma stone."

As of this week, Costello has alleged that he, too, is a victim of Teigen's bullying. On Monday, he shared screenshots of a text exchange he had with Teigen at the time, after Teigen helped circulate fabricated screenshots of Costello appearing to say the N-word. Instagram later deleted the screenshots in question from 2014 for being doctored. In Costello's texts with Teigen, she tells him he "deserve[s] to suffer and die," and "you might as well be dead."  In his statement, Costello writes that for years, being blacklisted from his industry made him suffer depression and suicidal ideation.

Also in 2014, Teigen departed Twitter for the first time following a controversial yet unfortunately not untrue post on gun control, in which she wrote, "active shooting in Canada, or as we call it in america, wednesday. That's not a joke. It is a fact. . . . I've lost faith in this world. Sorry if it comes off as being unemotional. There is just so much bad."

Of her departure at that time, Teigen wrote, "I can't see anything through the sea of hate and anger that is now my Twitter. Seriously I can't sift through it all," Teigen said. "It's gotten to the point people don't even see (t)he simplicity of the original tweet and have just wanted to get shaking-mad over something."

She would, of course, return.

The Trump era saw the peak of Teigen's online notoriety, and her brand of irreverent humor and punchy cyber takedowns thrived with no shortage of subject matter from the unhinged former president.

But early on, in the fall of 2016 shortly before Trump won the election, Teigen briefly micro-quit Twitter, making her profile with 2.8 million followers "private," shortly after being trolled for defending Kim Kardashian from mean jokes after Kardashian had been robbed and held at gunpoint in her Paris hotel room. "Celebs are supposed to love you guys while also knowing you'd make a meme of our dead bodies to get retweets," she had tweeted at the time.

Later on, over the course of the Trump era, Teigen became something of a "resistance" hero. She was blocked by Trump in July 2017, shortly after responding to one of his tweets, "Lolllllll no one likes you." In 2019, when Trump called Legend a "boring" singer, and Teigen, his "filthy-mouthed wife," Teigen offered the perfect response, tweeting, "lol what a p*ssy ass b*tch. tagged everyone but me. an honor, mister president," which was widely celebrated at the time, as a number of women and notable feminists joined her in reclaiming the "filthy-mouthed wife" label.

While promoting a collaboration with the brand Material, New York Times food writer Alison Roman referenced Teigen and Marie Kondo in her scathing criticism of celebrities and famous people leveraging popularity to start their own brands or lines of consumer goods, which Roman was notably doing, herself. Of Teigen in particular, she told the New Consumer, "What Chrissy Teigen has done is so crazy to me. She had a successful cookbook. And then it was like: Boom, line at Target. Boom, now she has an Instagram page that has over a million followers where it's just, like, people running a content farm for her." Roman added, "That horrifies me and it's not something that I ever want to do."

Teigen responded by calling the comments a "huge bummer" in a tweet, since Teigen said she's been using Roman's recipes for years, and even executive produced a television show Roman was on, which Roman had mentioned in the interview. The incident drew significant backlash for Roman, as many argued her interview was hypocritical, and also highlighted how she had singled out women of color, despite the abundance of white women — and for that matter, men in the field — examples she could have cited to make the same point. Despite Roman's apology, as her interview and subsequent backlash circulated further and further, Roman eventually had to leave the Times.

Overall, the feud was significant because it was a remarkable and perhaps even unsettling display of Teigen's influence and power on Twitter.

Last fall, Teigen and Legend lost their unborn son Jack 20 weeks into her pregnancy. On top of the tragic loss of the baby, Teigen was cruelly criticized and mocked by some social media users for taking professional photos while at the hospital, despite how it's a common practice by many who experience pregnancy loss to collect photos, mementos or other ways to memorialize their loss.

Reproductive health and justice advocates celebrated Teigen and Legend for their openness about losing their pregnancy, since miscarriage and pregnancy loss remain widely stigmatized and erased, but Teigen understandably took a break from social media for a few weeks.

March to April 2021: Teigen leaves — and returns — to Twitter

By early 2021, while Teigen remained widely beloved by liberal, blue-wave, "resistance" Twitter, many on the left had grown critical of her, as a wealthy celebrity seemingly trying to be relatable to middle or working-class people online. In particular, tweets by Teigen about her mother constantly losing Airpods, and in February this year, lamenting being duped into buying a $13,000 bottle of wine, sparked online reaction ranging from raised eyebrows to rigorous roasts and takedowns.

In March, Teigen called it quits, formally leaving Twitter, but not before a lengthy thread in which she describes how hard she's tried to entertain and bring joy to her fans, but found the negativity just wasn't worth it. Which is all, frankly, fair. A month later, Teigen returned to Twitter, again making a fair point that "it feels terrible to silence yourself." It does! But there's a difference between silencing yourself and giving yourself space from platforms that have become harmful to you.

As old and deleted tweets of Teigen's continue to be unearthed, and news continues to circulate about her leaving or being removed from projects, Teigen has been scarce online, lately, save for her Medium apology. And while in her post, she explains that she is in the process of privately and individually reaching out to those she's hurt, she's yet to publicly speak on Costello's recent allegations, or on the resurfaced Linsay Lohan tweet.

Teigen has certainly been the target of mean-spirited attacks, herself — especially after her devastating pregnancy loss. These attacks have also at times been pretty unnecessary or excessive, considering it seems misguided to expect wealthy celebrities to not be out-of-touch. But Teigen's pattern of taking these attacks from online randoms too hard has often raised a question of why, on top of having nearly everything anyone could ever dream of having, she still has needed so desperately to be liked.

As a recent, aptly headlined Esquire article points out, Teigen could, after all, "Just Be Rich." If her recent Medium post is a sign that she may be planning a gradual return to social media, perhaps, for her own sake if not for anyone else's, she should reconsider.