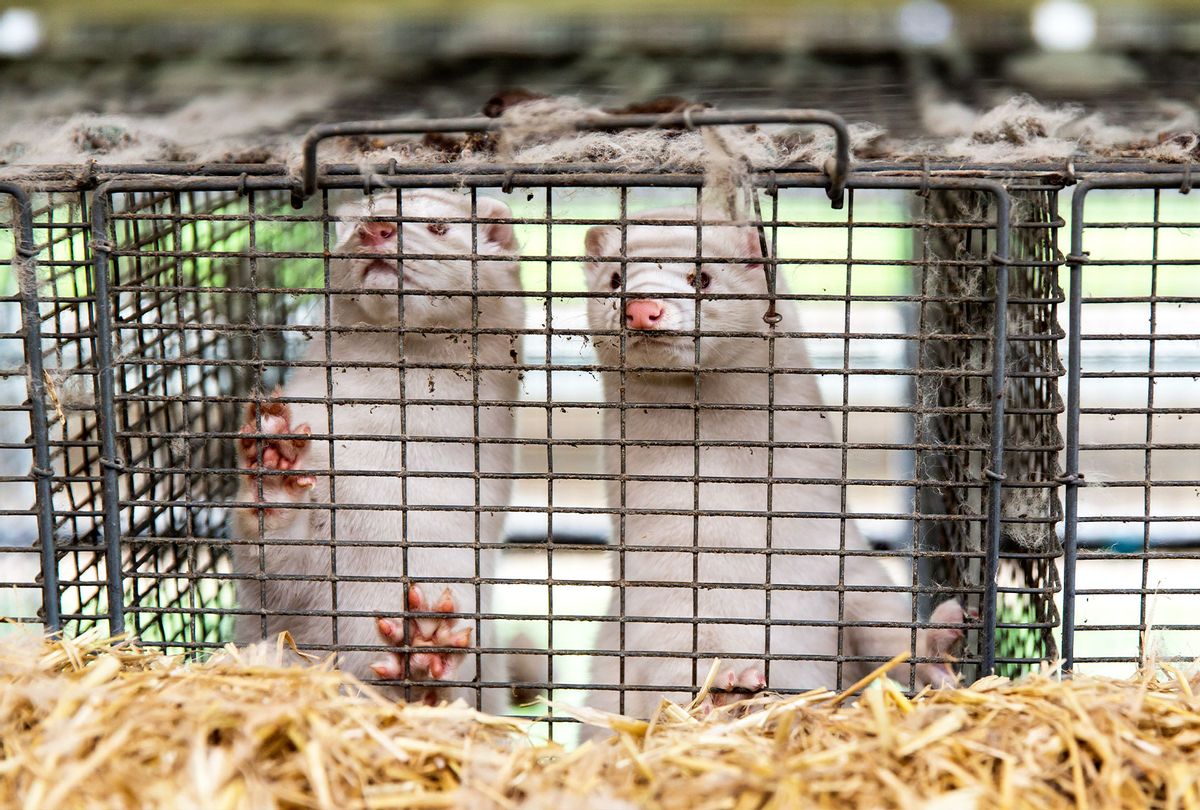 The happy-go-luck mink had no idea how lucky it was.

As a child, Scott Beckstead watched the foreman at his grandfather's mink farm keep the unnamed pet mink as his constant companion. Though the function of the farm was to skin and breed mink, this particular mink had become an unofficial mascot: picked by the foreman when it was a newborn, it spent much of its subsequent life swinging from his shoulder. Minks are widely regarded as cute; they look a bit like weasels and ferrets (all are part of a family known as Mustelidae) with their long bodies, wiry whiskers, tiny limbs, nimble digits and skin covered in rich, glossy fur. This particular mink, a male, was large and black, Beckstead recalled.

"There was this act of kindness shown this one random individual," Beckstead reflected. "I always thought that was very curious. I always thought, 'This is the mink that won the lottery.'"

Yet thousands of its peers on the farm were not so lucky.

Beckstead, who is now the director of campaigns for Animal Wellness Action at the Center for a Humane Economy, recalls seeing minks that had their ears or scalps removed by other minks who had grown aggressive in their cramped living conditions. He knew that if one mink was injured and another smelled blood, the wounded one was "doomed." Growing up, he was told that during the time of year when mink mothers gave birth to their kits, he had to be as quiet as possible and avoid certain areas of the farm so that they wouldn't eat their own offspring from stress. Once he saw a mink literally die from terror as she was taken to be killed and skinned; she may have intuited her grisly fate. All of the minks spend their days "constantly pacing and bobbing and weaving in their cages," behavior almost certainly caused by extreme boredom and frustration.

And all of this occurred on a farm run by a man who adored the animals entrusted to him.

"I truly believe that if you were a mink on a captive mink farm, that was the one you'd want to be on just because there was so much concern for their welfare," Beckstead said of his grandfather's mink farm. "Yet even under those best of conditions, I saw terrible, terrible things."

Mink farms, and the industry at large, is at something of a crossroads. The genetics of mink, and the close quarters they share on such farms, meant that they became a hotbed for the SARS-CoV-2 virus that caused the COVID-19 pandemic. Largely out of the public eye prior to the pandemic, mink farming became front-page news this year following stories of outbreaks and mass cullings. Yet for decades prior, animal rights activists opposed mink farming — both because of the inhumane way that the animals are treated and because of the seeming immorality of slaughtering animals merely to use their fur for luxury clothing.

Now, with renewed public scrutiny over mink farming, advocates of banning them believe they may actually have a fighting chance.

A new House bill, H. R. 4310, is a bipartisan proposal that would ban mink farming throughout the country. The bill is official known as the Minks in Narrowly Kept Spaces Are Superspreaders Act (or MINKS Act) — because of the minks' tendencies to be, well, superspreaders. Up to a quarter of mink farms in the United States saw outbreaks of SARS-CoV-2, the virus which causes COVID-19, and there have been at least 431 outbreaks in both American and European mink farms so far. (There are two extant species of minks, one American and one European.)

"If SARS-CoV-2 could design its perfect habitat, it might closely resemble a mink ranch: a stressed, immuno-suppressed inbred host with thousands of other minks kept in very small cages," Dr. James Keen, who formerly studied zoonotic disease outbreaks as a senior scientist at the U.S. Department of Agriculture, said in a press statement. "This environment maximizes chances for infections and mutations."

Now the director of veterinary science for the Center for a Humane Economy and author of a recent report sent to legislators about mink farming, Keen tells Salon that minks are particularly prone to contracting diseases that cross over to humans. As he explained, the reasons relate to evolutionary history and behavior.

"They're solitary creatures," said Keen. "Their territory tends to be hundreds-to-thousands of acres along water edges. Their whole immune system has evolved to have infrequent contact with other mink. When you take that sort of immune system, that's not used to living with others from their own species, and put them all crowded together — an average US mink farm has about 17,000 mink, for example, but they vary in size from smaller to over 50,000 — they do not like it."

He added that sometimes, "they escape," carrying their diseases with them. The situation is exacerbated by the fact that they aren't allowed to roam, explore and utilize the other freedoms that their wild instincts take for granted. This causes mink tremendous stress, which also compromises their immune system, Keen explained. This stress is why they will mutilate themselves and other mink, or engage in behaviors as unnatural as cannibalism.

"It is probably mostly out of frustration from being unable to manifest their normal behaviors," Keen suggested. He says there are four behaviors that characterize minks' instincts in the wild: They like to be alone, to roam, to stay active through activities like swimming and to hunt.

"Do they sound playful and intelligent? Yes, I think they are," he added.

Not surprisingly, some mink farmers are pushing back against the new movement to ban their industry. Speaking to both AP Wire Reports and Farm and Ranch, a mink farm owner in Idaho named Ryan Moyle characterized the anti-mink farming campaign as effectively being an effort to wipe out a culture that is ingrained in those who make their living as mink farmers.

"When they want to come out and ban and wipe out an entire culture, that's not what America is all about," Moyle said. He later added that mink farmers would lose everything if the bill passes and many could commit suicide. (Salon reached out to Moyle's farm for comment and has not heard back at the time of this writing.)

Beckstead, for his part, was skeptical of Moyle's rosy view of mink farming as a beloved culture. He pointed out that as anti-fur campaigns have changed fashion tastes since the 1980s, fur farmers have developed a sense of solidarity with each other.

"I don't know if I would call it a culture, but I do know that these are people who are very insular and they stay cohesive with each other," Beckstead explained. "I think a lot of that is because they have been under siege for decades now — ever since I remember talking with my grandfather when the anti-fur movement was starting to gain traction in the 1980s."

Beckstead recalled asking his grandfather how he would react if people demanded the outright banning of mink farms.

"He shrugged and he said, 'Times change. If that happens, then there won't be any more mink farms,'" Beckstead recalled. "He had this matter-of-fact attitude." When his grandfather later died, his grandmother basically shut the farm down and "pelted out" — which means to remove the pelts from all their remaining minks.

It seems like an anti-mink farming movement may be happening on a global scale. Austria and the Netherlands are leading a coalition of European Union (EU) countries demanding a ban on fur farming in Europe. States like Oregon and Wisconsin are at least acknowledging the COVID-19 threat posed by mink farms by demanding that mink be vaccinated against the coronavirus. In the near future, it is possible the world will pelt out of mink farming for reasons both practical and moral.