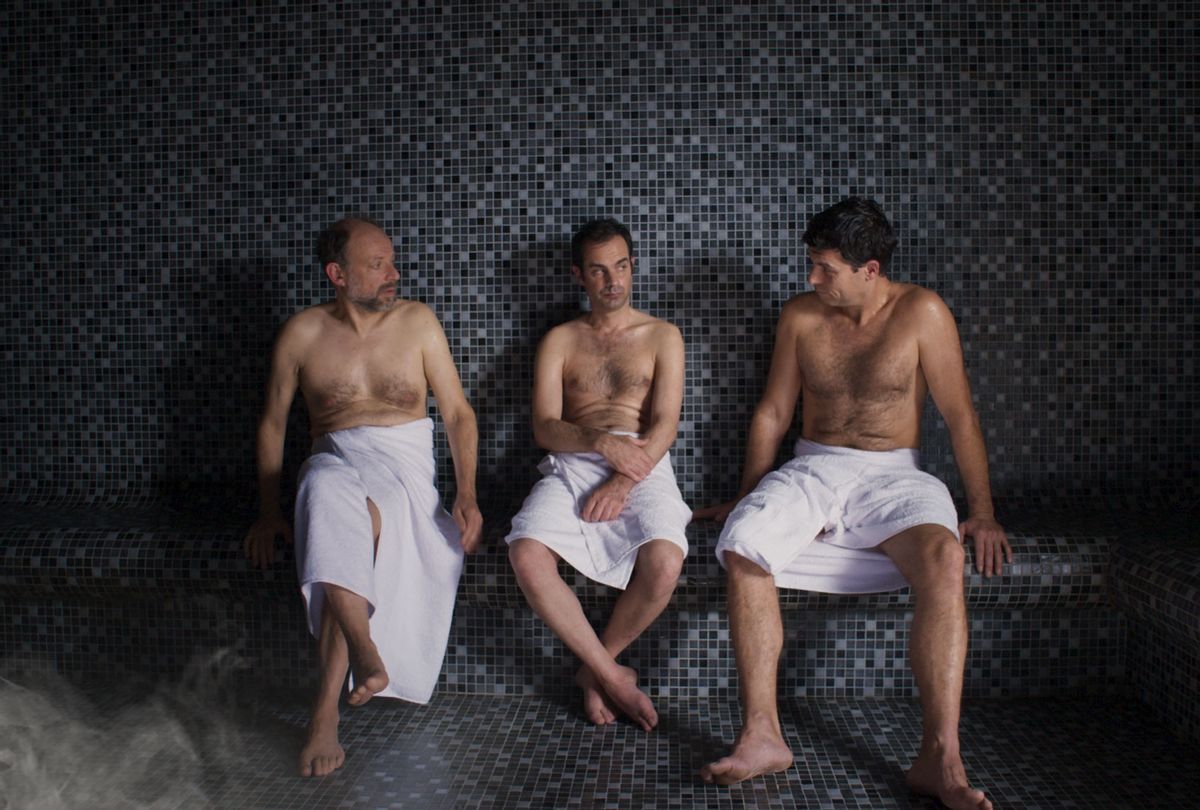 The caustic and provocative new film, "Bloody Oranges," which just had its premiere out of competition in the Midnight screenings at the Cannes Film Festival, is sure to leave viewers stunned. French actor Christophe Paou plays a central role as Secretary of Finance Stéphane Lemarchand, a powerful man being threatened by a journalist planning to expose his overseas accounts. However, as that crisis is being managed, Stéphane gets caught up in a situation that is far more unsettling.

Writer/director Jean-Christophe Meurisse's bold drama has some very pointed thoughts about toxic masculinity, hypocrisy, and meting out justice. (A particularly sensitive subject in France these days with its sex scandals). Meurisse doesn't just want Stéphane to be uncomfortable; he wants the audience to squirm as well.

Paou, who has appeared in Guy Maddin's "The Forbidden Room," and Nadav Lapid's "Synonyms," is probably best known for his role as the murderous title character in the gay thriller, "Stranger by the Lake." He takes another daring role in "Bloody Oranges." His entitled character shifts from being a smug politico to engendering sympathy, and Paou manages that tricky balancing act with aplomb — especially as Stéphane endures some rather extreme experiences.

The actor chatted from Cannes with Salon about toxic masculinity and making "Bloody Oranges."

Stéphane is a daring role that challenges viewers as much as it does you, the actor. From what I've seen of you on film, you are pretty fearless. What made you want to play this character?

I was interested in playing the Secretary and a political person because I'm so disappointed by what's happening in France. I love it when I see people who want to defend the Republic and fight for democracy, because democracy is dead. The appeal for me was to play with the darkness and the comedy of power. What happens to Stéphane in the end is bad, and it was hard to go through that scene, but I was happy to play that man — a political beast.

What I especially appreciated about your performance were your priceless facial expressions. In addition, his body language changes as he goes from a fear of one kind in the first half to a very different kind of fear in the second half, getting a breather in the steam room in between.

I don't think about my expressions. It's a question of the situation. I try to live what is occurring for the character. I don't pre-imagine what I'm going to do. The fear is not the same fear, it's about what's happening when he's going through it. He's going through some extreme situations. It's a tragedy, even if it's self-created.

He's got 300,000 Euros in Switzerland, and he doesn't have the right to do that, and someone is calling him on that. It was true that in France we had an affair like that. Suddenly, a journalist called him on his cell, and says, "We know you have money in Switzerland." There is some real pressure on him. Then there is the pressure [in the second half] with his attacker, who forces him to do things. In contrast, the scene in the steam room is a release, because he thinks things are over. His body is letting go.

The film is addressing the emasculation of the characters — a man who cannot provide for his family, a teenage girl who exacts revenge on her attacker, and your character who is victimized. What are your thoughts on our culture of toxic masculinity? This film is a real response to that as France, in particular, seems to be grappling with this topic presently.

That's what I like. The society we have been living in since the beginning of the 20th century is a patriarchy. And this power has been growing until today very strongly. The film's characters — the serial killer, the politician, and the lawyer — have big balls and have to show themselves to society. I liked in the script, that it's like a revolution — now we might do something else. There is something like a revolution in this notion of revenge. For me, the best scene is in the end with the lawyer and the victim, because you are in front of all that masculinity. You are with the characters, and you think as well, we are living in this society that is very violent for women and poor people. It's not a political movie — I mean, it is — but it is not being done for that reason; it is political in the Greek sense of "politic," that we make our society. This film talks about that. Each character must determine: What is our place in society?

Stéphane is a man who has power, but he is, in fact, really always powerless. He can't do much for himself.

He has a power because society is moving in a new direction. He has to use his power by lying to his wife and children or secretly hiding money in Switzerland. He has small power.

The film has a wicked, acidic sense of humor. You don't get to perform much comedy here, but Stéphane does talk about laughing at unhappy accidents. What observations do you have about the absurdities of life?

You've had an interesting career having made "Stranger by the Lake" which exposed you to American audiences. You've worked with Guy Maddin and Nadav Lapid and even appeared in a Hilary Swank film, "The Affair of the Necklace." What direction do you want to take in your career?

We were talking about the unknown! [Laughs] I read scripts, and if it's Africa or America or France and if the script is good for me, why not? I'm open to reading new scripts and go wherever the shooting takes me. I'd like to work with American directors. But I don't know if I will. I'd like to play in comedy or do a Western. It was my dream as a kid to be an actor because I used to watch Westerns. I love Clint Eastwood's "Unforgiven" and Sergio Leone.

What are your thoughts about the film's title?

I like it because it has something to do with the vitamin — it has a lot of energy and it's also bloody. It's something you can squeeze, which might be very good.

What about the film's concept of justice?