In "Mama Weed," Isabelle Huppert is a stylish drug dealer with a twist: "She's a female Robin Hood"

"It's part of my DNA to always put some irony in any situation," the acclaimed actress tells Salon of her new film 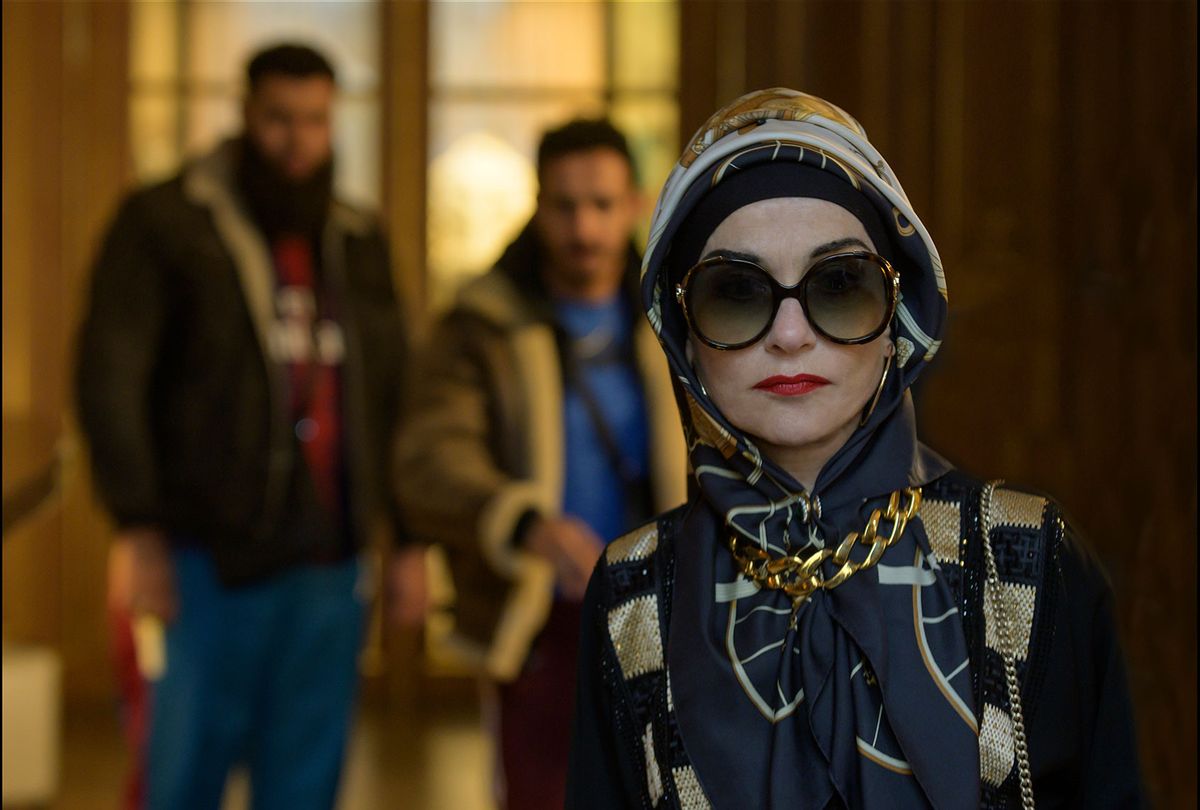 Isabelle Huppert exudes an air of mystery that entrances. She can be seductive and intimidating. Characters like her vengeful rape victim in "Elle," or her giddy villain in "Greta," allow her to be devious and mischievous, but Huppert has sly comic verve, too. It may be this mercurial quality which keeps people guessing — that makes her so spellbinding on screen.

Her latest film, "Mama Weed" is a spry comedy that allows Huppert to let loose as Patience, a translator for the police. She listens to wiretaps of Arab drug dealers to help Philippe (Hippolyte Girardot), the Chief, solve crimes. However, when Philippe is about to nab Afid (Yasin Houicha), Patience manipulates the situation so Afid is caught without the drugs he is transporting. She does this because Afid is the son of Kadidja (Farida Ouchani), a nurse at the assisted living facility where Patience's mother (Liliane Rovère) resides.

Patience acts because she needs money. Donning the disguise of a wealthy Moroccan woman, Patience becomes "Mama Weed," and using contacts from her police work, goes about selling the ton and a half of hashish Afid hid. The money she earns (and launders) pays for her mother's care as well as a lawyer for Afid. Patience is nothing if not altruistic. "Hard times is done gone!" she says at one amusing moment. Watching Huppert sing in a car in another scene is also very funny.

Huppert is irresistible in the film and relishes the duplicity that helps her get one over on the cops. During a cozy moment with Philippe — who is also her lover — he observes that Patience is a paradox: so fragile, and yet has a self-confidence that impresses. This line captures Huppert's allure perfectly. The actress chatted via Zoom with Salon about "Mama Weed" and misbehavior.

You strike me as being a workaholic, like Patience. What drives you to work so much?

I don't think I work more than some other people. I don't feel like I work constantly. I haven't worked for the past five months. I am doing two plays in a row now, but that's due to a situation — I was doing "The Glass Menagerie" in Paris when confinement occurred, so we stopped, and we resumed doing it recently. And now I am rehearsing "The Cherry Orchard," which I begin next week. So, it was a little bit of a jam recently for the theatre, but I don't feel I'm a workaholic. It's a myth. [Laughs]

Patience says life finds its path. What observations do you have about your career and finding projects that challenge you?

I feel lucky, but maybe it's not luck. I know how to make good choices, and I have the privilege to have good opportunities. Sometimes, you do whatever comes your way — but this is not my situation. I have the ability to make choices, so I try to make good choices. For me, a good role is as different as possible from the previous one, but gives you the opportunity to create your own person around the role. It's a mixture between fiction and autofiction. That was the case with "Mama Weed." Not that I am a drug dealer myself — of course not! But I think the film is interesting because it's a portrait of a woman. It is a comedy, and people laugh — the gap between me and the wealthy Arabic woman I disguise myself as is so big, that it creates laughter. But it's a woman who is solitary, like a lonesome cowgirl. She is seen taking care of her daughters and her mother, and she is seeking something. I'm not sure what she is looking for. The end of the film is quite revealing, on this matter. The whole film revolves around this persona. She grabs the opportunity to win with such velocity and courage, she put herself in quite dangerous situations. She has nothing to lose.

There's a mischievous quality to the role, from the drug dealing and lying to a scene of shoplifting. What do you think motivates Patience to misbehave?

She's a translator, so she's quick. She hears a line and has to jump into [her work]. When she realizes that the man she's supposed to spy on [Afid] is the son of the nurse who takes care of her mother, that's a coincidence — but movies are full of coincidences. Sometimes life is, too. She jumps at the opportunity. At first, she wants to save him. She doesn't think of taking the money. But gradually, she realizes there will be a good amount of money to take, and she jumps on that opportunity. But the whole process is initiated by friendship. Because she wants to protect the son of the nurse, who is caring for her mother, and therefore protect her mother. I like that idea it comes from friendship, not greed. She's a female Robin Hood, you know. She gives some of the money to her daughters, to Kadidja. She takes care of people. Even when she's confronted by the bad guys, she makes fun of them. She has a good sense of humor.

Patience faces some ethical situations — she launders money and manipulates things to her advantage. What did you think of her character's desperate measures?

Undoubtedly. She's a real crook. There's no attempt to legitimize what she does, she's a drug dealer. But that's the subject of the film. The film is based on a very good book by Hannelore Cayre ["The Godmother"]. I heard her on the radio, she had just won a literary prize. I was interested in what she was saying about the book and the character. I ran and bought the book and then I met the director, and he acquired the rights and wanted to do it with me. It was a happy coincidence. Cayre is a lawyer herself. I didn't ask if the story was based on truth or something she grabbed from reality.

I recall from our previous chats that you love to read. What are you reading these days?

I am not reading now. I miss reading because I have "The Cherry Orchard," which I am performing in four days. I will resume reading after I start the play. Right now, I cannot read.

Have you had any encounters with the law?

Can I ask about your attitudes to drugs?

Mama Weed takes some risks in her life. What risks have you taken?

Not as many risks. I took a risk as an actress facing that big dog in the film. I had to practice making friends with him. He was a good dog, but I'm not a dog person.

What did you think about Patience's relationship with Phillippe? She teases him, and leads him on, romantically and professionally. How do you play seductive and sinister?

I don't know if it's a quality, but it's part of my DNA to always put some irony in any situation, and a little bit of mystery. I don't think you make films with good feelings. You make films with edgy feelings. It's my tendency to always put this lightness in whatever role I do. Maybe one day I'll do a role of a completely idealized character who cares for everyone with tenderness and kindness. That would be a real challenge for me, because that's not my tendency as an actress. I put a mischievous side to it.

Lastly, what are your thoughts on your fanbase, legacy, and body of work?

I'm not sure when you do as many films as I do that you are aware of the sum it represents. As a spectator, I know I can be attracted to an actor and in total admiration. Luckily, I don't have that view about myself, but sometimes when I talk to people, I realize that as an actress how much you get into people's lives and how important you are for them. But I am more immersed in what I'm doing at the moment, so I don't really think about what I have done. Maybe I should, I would be more confident — not that I'm not confident — but it's not something I carry constantly in my mind, luckily. If you have an idea of what you are, or what you think other people think about you, that is not good. I don't think I completely vanish in my films. I feel I put something of myself in each role. There is something very different in each but something in common, too. I don't use external tools, except when I disguise myself with the help of a costume. But most of the time it is not that I compose something radically different, it is more about subtle changes.

"Mama Weed" is in theaters July 16 and available on demand on July 23.