Meet Team USA gymnasts: Here are the newcomers joining Simone Biles on the quest for gold

A breakdown of the atheletes and their strengths, along with a full schedule of when to watch the various events 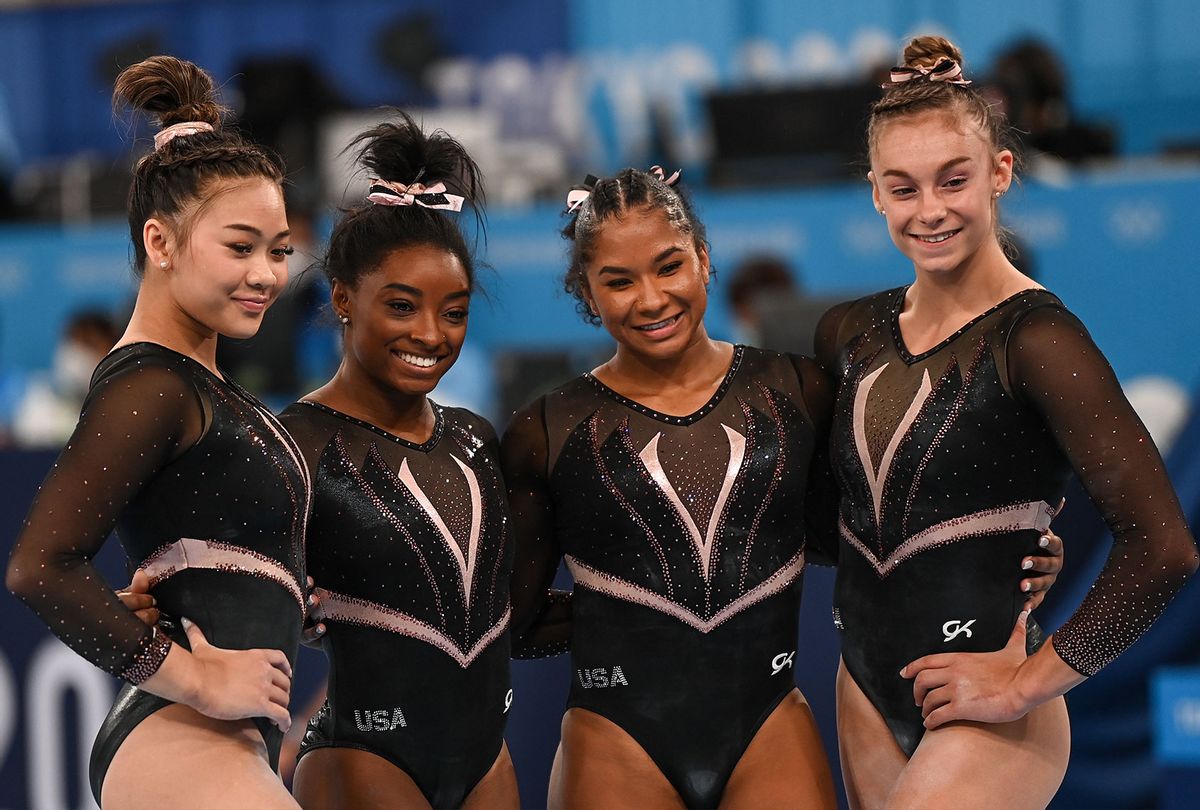 With the historic Tokyo Olympics finally underway, all eyes have been on Team USA's men's and women's gymnastics teams, which have been dominant in their respective competitions for years. This tradition is expected to continue, with commentators speculating that Team USA's women's gymnastics team is the squad to beat. They are, after all, helmed by Simone Biles, widely regarded as the greatest gymnast of all time, who's achieved a number of gravity-defying feats that have literally been named after her.

But Biles is joined by an impressive — and diverse — squad of Olympians, including Sunisa Lee, Jordan Chiles and Grace McCallum, who will compete in the team event, as well as Jade Carey and MyKayla Skinner, who will compete in the individual apparatus events. They're the first women's gymnastics team to compete in the Olympics following two significant events: the exit of longtime coaches Bela and Marta Karolyi, and the ousting of USA Gymnastics doctor Larry Nassar amidst the devastating revelations that he had assaulted hundreds of young, female gymnasts through the decades.

And while the women's team has often been more widely recognized, the men's team is impressive, too, featuring Brody Malone, Sam Mikulak, Yul Moldauer, Shane Wiskus, and Alec Yoder.

If you're planning on tuning in to watch the squads compete, here's what you need to know about their trailblazing members. Plus, check out the full schedule when each event will take place.

At 24 years old the compact but dangerous 4-foot-8 Biles is a generational talent with a long, decorated history of making history, shattering records for winning more titles than any other American woman at world competitions. She holds a record of seven U.S. all-around titles, and five world championship all-around titles — numbers that were unheard of prior to her. She currently holds the record for most medals in world championship history at 25, and world titles at 19.

While she is clearly an all-around powerhouse, her strongest events are the vault and floor exercise, having two unprecedented moves named after her for each event, including the notorious Yuchenko double pike on vault. Its difficulty is so high that other gymnasts are discouraged from attempting it.

But a key part of Biles' legacy is her courageous support for her fellow survivors of sexual assault, sharing her story as one of Nassar's victims, and fighting for change and accountability within USA Gymnastics. In an interview with the "Today" show in April, Biles says a key reason she chose to return for the Tokyo games despite the toll of the pandemic was her desire to keep the memory of other Nassar survivors alive, and shine a light on the need for more accountability.

"Since I'm still here and I have quite a social media presence and platform, they have to do something," she said. "So I feel like, coming back, gymnastics just wasn't the only purpose I was supposed to do. . . . I don't think I knew [that was part of my reason], either, but I feel like gymnastics wasn't the only thing I was supposed to come back for."

Hailing from Minnesota, Lee is an 18-year-old Hmong American who is widely regarded as a favorite for Olympic gold on the uneven bars. Her routine that helped her qualify for the team went viral on social media in June, and is known to be one of the most difficult in the world.

A two-time national silver medalist in the all-around, Lee's path to Tokyo included recovering from a broken foot in 2019, and losing a loved one to COVID-19 last year. Lee has also shared the story of her family's struggles after her father became paralyzed following an accident. Her place on Team USA has been widely celebrated by the Hmong community, and especially those in her home state of Minnesota.

At 20 years old, Chiles, born in Oregon and raised in Washington, is well-known for training with Biles at World Champions Centre in Texas. Chiles had initially struggled and questioned continuing to pursue elite gymnastics following a disappointing ranking in the 2018 National Championships, only to carve out a path toward Olympic gold by moving to Texas to train with Biles.

In June, Chiles placed third in the all-around at the U.S. National Gymnastics Championships right behind Biles and Lee, and dominant performances on the vault, uneven bars, balance beam and floor clinched her a spot on the team at the end of last month.

Like Lee, McCallum, 18, also hails from Minnesota, and is overcoming injuries, including a broken hand, from the past year to join Team USA. McCallum has been particularly dominant on the balance beam, and finished fourth at the U.S. Olympic Trials. Her credits include a U.S. balance beam bronze medal earlier this year, a 2019 World team championship, a U.S. all-around bronze medal in 2019, and a 2018 World team championship. One of six children, McCallum completed high school online, and her social media indicates she's a loving dog-mom to German Shepherd Bella.

Born and raised in Arizona, at 24 years old, Skinner is one of the more senior members of the women's team. Skinner will be competing in the individual events on the vault and floor after finishing fifth behind McCallum. She previously joined Team USA in Rio as an alternate back in 2016. Skinner's accolades include being a part of the U.S. team that won gold in 2014 at the world championships, four gold medals at the 2014 Pan American Championships, and two NCAA gold medals.

Skinner, also a member of the University of Utah's gymnastics team, has announced her plan to retire from professional gymnastics after the Olympics, and focus instead on completing her degree.

Another Arizona native, Carey, like Skinner, will also compete in the individual events, separate from the four-person U.S. team. Carey qualified for the Olympics even prior to the trials last month by claiming a spot over a year ago, through earning enough points at the Individual Apparatus World Cup Series on the floor and vault.

Carey, 21, has won four world championship medals, and won a silver on vault and the floor exercise at the 2017 World Championships. She committed to Oregon State University back in 2017, but deferred enrollment to focus on preparing for the Olympics.

A Georgia native and decorated collegiate gymnast at Stanford, Malone, 21, is new to international competitions, but has won the past two NCAA all-around titles. Malone led the pack at trials, finishing first on high bar, second on floor and rings, and third on parallel bars. In addition to his decorated gymnastics career, Malone has competed in rodeo events like team roping and jackpots. He's also one of four siblings, and lost his mother to cancer in 2012.

Mikulak made his Olympics debut back in 2012 in London, and at 28-years-old, is one of the more senior members of the squad. The Southern California native is a formidable competitor, winning all six U.S. titles he competed for from 2013 through 2019, and placing first on floor and second on high bar at the trials last month. Both of Mikulak's parents are former competitive gymnasts themselves.

Moldauer, 24, was born in South Korea, and adopted and raised on a farm in Colorado. Since, he's won a national title and two NCAA all-around titles while competing for Oklahoma. Moldauer wound up in second place at the Olympic trials in St. Louis, and is expected to dominate on nearly all exercises in Tokyo.

Born in Minnesota, Wiskus is a three-time NCAA champion, and the son of a stunt pilot father. His career has had its ups and downs, as he struggled in this year's national championship placing ninth in all-around standings — only to come back strong for Olympic trials and place third. Wiskus' placement on the men's team has sparked controversy and backlash against the University of Minnesota, which canceled its men's gymnastics program that Wiskus had competed for.

Yoder joins the men's Tokyo squad as a "plus-one," competing as an individual with his scores not counting to the team. Yoder, 24, is a first-time Olympian who will compete on pommel horse, but has previously competed as a member of the 2018 world championships team. He also has a promising career outside of gymnastics in fashion: in 2019, Yoder featured in a Hugo Boss modeling campaign called the Suit Challenge, and is one of few men's gymnasts who have crossed over into fashion.

Here's a breakdown of when the major Olympic gymnastic events will take place. For more detailed coverage, check out NBC's schedule. You watch at NBCOlympics.com, stream on Peacock or catch primetime highights on NBC.