GOP's race to the bottom: Who can be the most obnoxious troll?

J.D. Vance's plan to ban the childless from voting illustrates how GOP politics has become a "worst person" contest 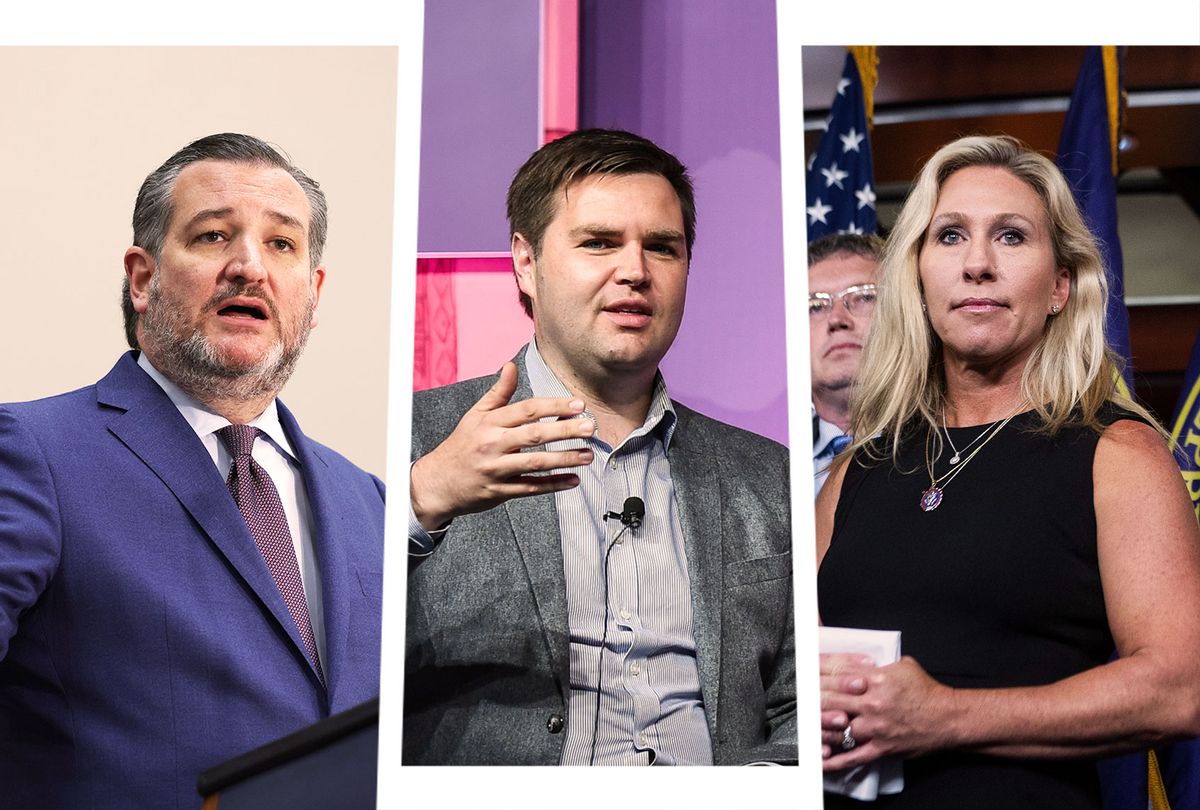 J.D. Vance is getting desperate. The author of a book now famous for being adapted into the worst Netflix movie of all time is running for Senate in Ohio, hoping to use the same down-home country boy cosplay that effectively fooled both country club Republicans and the Hollywood liberals who bought "Hillbilly Elegy" to gain the trust of actual Ohio Republican voters. So far, however, the Yale law school-educated venture capitalist with a campaign bankrolled by one of the most sinister Silicon Valley financiers, Peter Thiel, has not received the open-armed welcome he clearly expected. The fight between Vance and the other Republican candidates, Josh Mandel and Jane Timken, has turned into a battle of who can be the Trumpiest. Vance's air of being a try-hard — compared to the more authentic racist pandering that emanates from Mandel — has left him falling way behind in the polls. Even moves like apologizing abjectly for past Trump criticism just end up being a reminder that, even though Vance is every inch the hardline authoritarian, he is bad at hiding what political science professor Scott Lemieux described as "his disdain for members of the Appalachian working class who have not shared his good fortune." And so, to gain ground, Vance has turned to a tactic that has become the primary form of discourse in the GOP, post-Donald Trump: trolling.

Largely, the competition takes place on Twitter, where Vance says dumb and annoying stuff in an attempt to attract liberal outrage and mockery, and ideally, get journalists to write pieces framing him as a pre-eminent triggerer of the liberals. So far, Vance has pretended that he wasn't familiar with New York City and wondered if it was "like Walking Dead Season 1 or Season 4." (He ended up staying in the Hamptons.) He has tried to frame support for universal adult suffrage in the U.S. as a matter of "global oligarchy," an unsubtle head nod to racist conspiracy theories fueling the most fascist fringes of the GOP. And he pathetically joined in on the right-wing dunking on Gen. Mark Milley for his comments suggesting that racism is bad.

Now Vance, grasping for headlines, has started to argue that childless adults should not have the right to vote. The excuse for this is that the childless have "no physical commitment to the future of this country." He targeted Vice President Kamala Harris, Rep. Alexandria Ocasio-Cortez of New York, Sen. Cory Booker of New Jersey, and transportation Secretary Pete Buttigieg as people who, because they are childless, should be blocked from the franchise. Notably, three of the four are people of color and one is gay, underscoring how much this gambit is about appealing bluntly to the MAGA belief that only people that are like them deserve to have a say in government.

This move is unlikely to bolster Vance's chances, in no small part because he just is bad at hiding how much he doesn't believe his own B.S. (Like most in his elite social class, Vance waited until his early 30s to have children.) But the fact that he went there is troubling in and of itself because it illustrates just how much Republican politics have turned into a trolling contest. The result is the rapid decline into authoritarianism and even fascism among the GOP base.

Vance is doing this because he's running well behind Mandel, whose platform can basically be summed up as "Gilead was actually a utopia." That sounds hyperbolic, but no, for real, he's been arguing that we "need a Judeo-Christian revolution in this country" and that a belief in God should be enforced "in the classroom, in the workplace, and throughout society." Mandel's got a leg up, however, because he comes across as more sincere in his fanaticism.

But even though Vance's strategy won't work for him, it still injects real poison into the political bloodstream.

Fox News picked up on Vance's idea and had a segment where they pretended to "debate" this notion, but really, the point was to gin up jealousy in their audience of supposedly hedonistic childless liberals who are living it up while you, Fox News viewer, had the hard life of diapers and paying for band camp. It was more grist for the spite mill that has become the whole of right-wing politics these days.

Vance, of course, is just part of the larger Republican troll-industrial complex, in which Republicans attract attention and money from the base by competing to see who can be the worst. Recent examples include Sen. Ted Cruz of Texas (and, of course, Trump himself) whining that Cleveland's baseball team dropped a racist mascot, Florida Gov. Ron DeSantis selling anti-vaccination gear at his campaign website, and Georgia Rep. Marjorie Taylor Greene calling Air Force veteran Rep. Adam Kinzinger, R-Ill., a "traitor" because of his outspoken opposition to the fascist insurrection on January 6.

These kinds of tactics work to get support from the GOP base. DeSantis has become a favorite for Trump's running mate if/when he runs for president again in 2024. Cruz is both one of the most hated men in D.C. and one of the strongest fundraisers, filling his coffers with eff-the-liberals dollars. And Taylor Greene, whose bug-eyed ravings regularly attract liberal dunks and outrage, is one of the biggest fundraisers in the House.

The problem, of course, is that constantly upping the ante in a shitbird contest means spreading political ideas that have real impacts on real people. For instance, Republicans like DeSantis got into a contest over who could be the most hostile to efforts to end the COVID-19 pandemic. The result was that Republican voters decided the best way to show their right-wing bona fides was to refuse the vaccine. Now COVID-19 rates are soaring — and Florida is leading the pack with new infections.

Vance's rhetoric contributes to the larger push of Republicans getting increasingly radical in the belief that people who aren't like them have no right to vote. It really amped up during Trump's drawn-out, failed coup after the election, which he repeatedly justified by insinuating that voters in cities like Philadelphia and Detroit were inherently illegitimate. Unfortunately, long after Vance is gone from the political scene, his "helpful" illustration of who doesn't deserve the right to vote — three politicians of color and one gay politician — will linger in right-wing rhetoric, having been validated by his status as a member of GOP elite and, sadly, a best-selling author. As Republicans in state government continue to look for ways to kick people off voter rolls and declare urban voters illegitimate, people like Vance help justify their efforts.

Here, of course, is where readers will ask, "What can I do to fix this?"

I wish I had better answers. Because this is mostly about intra-Republican politics, it's hard for outsiders to do much. The only thing liberals can do is strive to not reward these tactics by providing the outrage or the dunks that someone like Vance is using to burnish his liberal-triggering credibility. If you must draw attention to it (as I'm doing here), the only approach is to go meta — explain what he's doing and why, instead of simply arguing back or getting angry, which is what he's trying to bait progressives into doing. But outside of this, the Republican race to the bottom may have to be something we're stuck with until it plays itself out, which could get very ugly indeed.